It’s been a very busy start to 2022 for the Senedd with its detailed scrutiny of the Welsh Government’s latest spending plans.

In our December article, published just after the Welsh Government’s Draft Budget 2022-23, we summarised the key allocations by government department and the changes from last year.

Since then, the Senedd has been scrutinising the budget and in this article, we set out five things we’ve learnt about the Welsh Government’s Draft Budget for 2022-23.

1: The Senedd had four weeks during term-time to scrutinise the Welsh Government’s Draft Budget and for committees to publish their reports. Less time than normal

The Welsh Government published its Draft Budget for 2022-23 on 20 December 2021, the first day of the Senedd’s Christmas recess. This means the Senedd had only four sitting weeks to complete its scrutiny and for committees to publish their reports.

This is the third consecutive year the timing of the publication of the Welsh Government’s draft budget has meant there’s less time available for scrutiny by the Senedd.

Some submissions to the Committee’s pre-budget consultation noted the short time available for scrutiny. For example, Chwarae Teg said the “limited opportunity for civil society to engage with the scrutiny of the actual draft budget continues to be an issue”.

The Welsh Government said it was not able to follow the normal budget timetable. This was because it would not know how much funding it was going to receive until the UK Government completed its comprehensive spending review.

For the first time since 2017, the Welsh Government has published a multi-year budget. The Draft Budget sets out the funding for the next financial year, 2022-23, as well as indicative allocations for 2023-24 and 2024-25. It’s been able to do this because, on 27 October 2021, the UK Government published its Autumn Budget and Spending Review, which included information on those future years. You can read more about this in our article, ‘What does the 2021 Comprehensive Spending Review mean for Wales?’.

Many public bodies welcomed the multi-year budget. These include the Welsh Local Government Association, which said its decision-making was “hugely transformed by the ability to plan on a multi-year basis”.

The total Welsh budget for 2022-23 is over £24 billion. Of this, £18.8bn is allocated to Welsh Government departments for day-to-day spending. Based on the Welsh Government baselines, which exclude temporary COVID-19 allocations, these allocations have increased by £2.5 billion (or 15.0%) compared with those for 2021-22. The increases in the indicative allocations for the following years are much smaller: 2.9% for 2023-24 and 2.4% for 2024-25.

As shown in the infographic below, the largest increase for 2022-23 in value terms is for the Health and Social Services department (£1.0bn), which will receive 52% of the total amount allocated for day-to-day spending in 2022-23. While the allocations for other departments also increase, Wales Fiscal Analysis has reported that, outside of the NHS, spending will remain below pre-austerity levels, despite the projected growth over the coming three years. 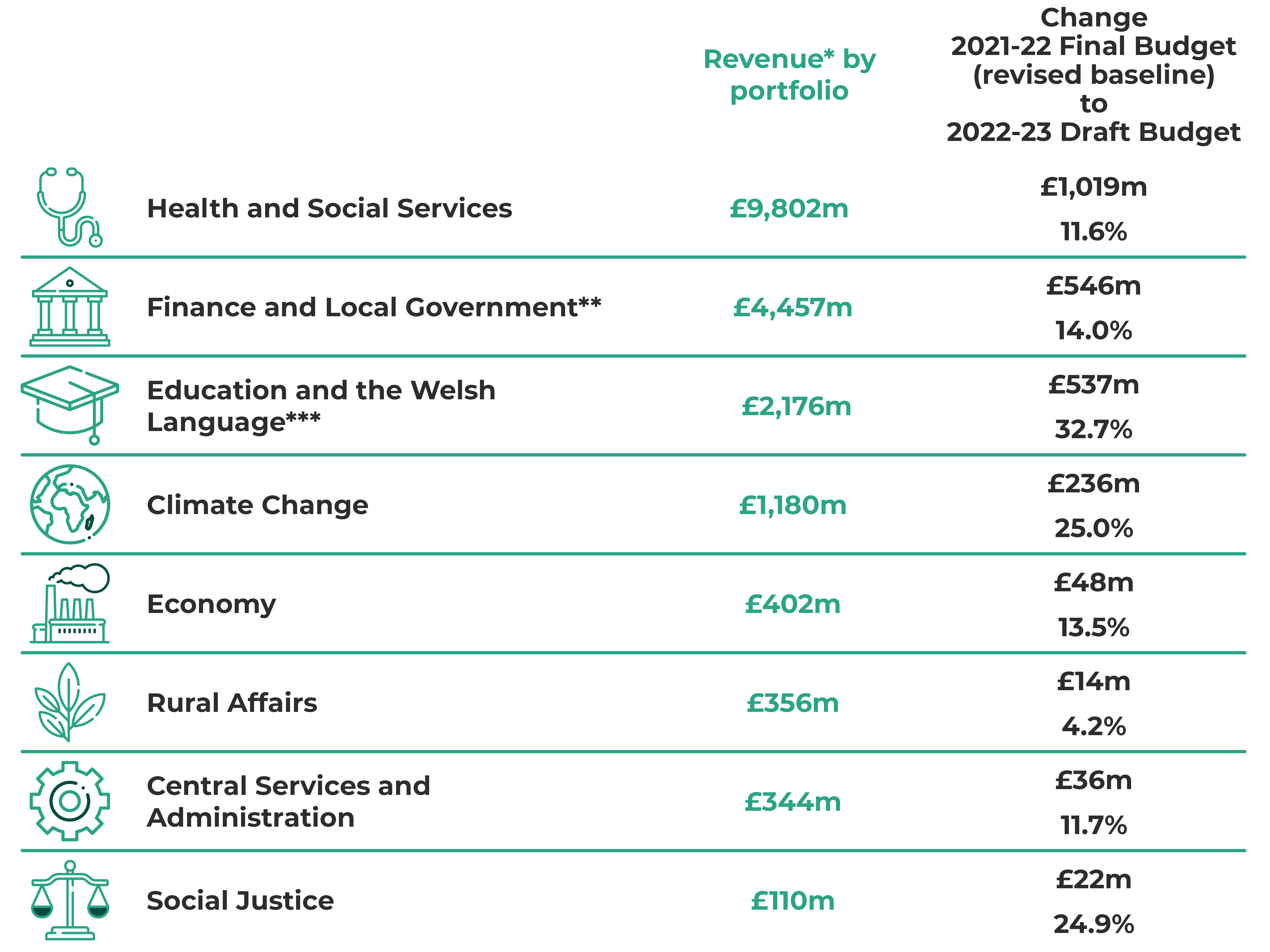 *Revenue allocations consist of day to day running costs such as staff pay and the purchase of consumable goods and services.

*** Includes allocation of £459 million of non-fiscal revenue due to student loans.

Figures are rounded. Refer to the Welsh Government Draft Budget 2022-23

4: Capital funding falling in each year of the settlement will be “particularly challenging” for the Welsh Government

The Draft Budget also allocates capital funding to individual Welsh Government departments. This is funding for expenditure that results in an asset. For example, a building, equipment, infrastructure or technology. The Welsh Government says its capital allocation from the UK Government falls in cash terms in each year of the settlement and will, by 2024-25, be 11% lower than in 2021-22.

The Minister for Finance and Local Government described this as “particularly challenging” and is seeking to maximise the amount available for capital spending by:

The Institute for Fiscal Studies said the Welsh Government had another option if it wished to increase the amount available for capital. It could switch funding from revenue to capital if it so wished. It also reported the capital budget was “substantially higher than it was during the 2010s, and it's still at a level that's pretty high historically”.

The Draft Budget maps out capital investment against service area. There are winners and losers. The largest spend is for the Climate Change department, with £4.8 billion provisionally allocated over the next three years (£1.6 billion in 2022-23). This equates to more than half of the Welsh Government’s total capital allocations.

5: Funding in response to the climate and nature emergency may not be enough and may not be new money

In October 2021, the Welsh Government published its second emissions reduction plan for Carbon Budget 2 (2021 to 2025), which sets the “foundations to make Wales net zero by 2050”. You can read more about this in our article, “A new plan for a Net Zero Wales”.

Through our new three year Infrastructure Finance Plan underpinned by £8bn of capital expenditure we have set out how we have considered the carbon impact of all of our investments aligned to our Net Zero Wales Plan, with a £1.8bn targeted investment in our response to the climate and nature emergency.

However, the New Economics Foundation said not all of the £1.8bn identified in the Draft Budget 2022-23 was “new money” since it included some pre-determined spending. It estimated that the value of new or additional spending fell short of the additional £600m per year (or £1.8bn over three years) the Welsh Government reports it is spending. Since 2019-20, only “something like” £290m could truly be called new and additional decarbonisation spending.

Today (4 February 2022) is the deadline for the Senedd Finance and Policy Committees to publish their reports on the Draft Budget.

What could a four-day week mean for Welsh workers and employers?