What does the 2021 Comprehensive Spending Review mean for Wales?

On 27 October, the Chancellor of the Exchequer, Rishi Sunak, announced the Autumn Budget and Spending Review 2021, which allocated record funding to the Welsh Government, but also, contentiously, directly allocated funds in devolved areas.

The Spending Review is a statement of the UK Government’s spending plans for each government department and the devolved administrations’ block grants for the following three financial years, up to 2024-25.

Alongside the Spending Review, the Office for Budget Responsibility (OBR) published its Economic and fiscal outlook. The OBR projects faster than expected economic growth for the UK than originally expected in its March projections. It expects the UK’s economy will return to “pre-pandemic levels by the turn of the year”.

What does this mean for Welsh funding?

The UK Government estimates that an average additional £2.5bn of annual funding will be provided to the Welsh Government through the Barnett formula up to 2024-25 “on top of its annual baseline funding of £15.9 billion”. In a joint statement, the Chancellor and the Secretary of State for Wales, Simon Hart, described the Spending Review as allocating a “record £18 billion a year for Wales”. The Chancellor said the additional funding:

..means the Welsh Government is well-funded to deliver all their devolved responsibilities while the people in Wales will also benefit from this Government’s commitment to levelling up opportunity.

The Spending Review included funding of £900m to support farmers and land managers, along with £6.2m to support fisheries. It also allocates a £130m fund for Wales through the British Business Bank, which provides debt and equity finance to small and mid-size enterprises (SMEs), saying it would work “closely with the devolved administrations”. The UK Government will also provide “accelerated funding” for the Cardiff City Region Deal, “bringing forward £105 million for the remaining nine years of the Deal from 2022-23 onwards”.

The Spending Review confirmed the establishment of a Veterans Commissioner for Wales, responsible for “work(ing) to improve the lives and opportunities of the Welsh veterans’ community”.

Wales Fiscal Analysis estimates that the core budget for annual day-to-day spending by the Welsh Government will increase by £2.9bn by 2024-25, compared to the 2021-22 baseline, “equivalent to an average of approximately 3.1% a year over the Spending Review period” in nominal terms (figures not been adjusted for inflation or other factors).

Before Brexit, Wales received some EU funding through EU structural funds, via the European Regional Development Fund (ERDF) and the European Social Fund (ESF). This funding was administered by the Welsh Government. According to the Institute for Government, Wales received €780 per person in EU structural funds between 2014 and 2020, significantly more than England (€130), Scotland (€180) and Northern Ireland (€280).

After Brexit, the UK Government announced the UK Shared Prosperity Fund (SPF) as a replacement for the ERDF and ESF, using powers in the Internal Market Act 2020 and allocating funds through a series of separate schemes. This includes the Levelling Up Fund and the Community Renewal Fund. Under the SPF, the UK Government will allocate funding directly to local authorities rather than through devolved administrations.

The Spending Review announced the 105 projects that had been successful in the first round of the Levelling Up Fund. Ten of these projects are in Wales for which £121m has been allocated. This represents 7.2% of the total fund allocated to date (£1.7bn). The projects include dualling of the A4119 road between Tonypandy and Cardiff, regeneration of Aberystwyth, revitalising the Pontcysyllte World Heritage Site and redeveloping Theatr Brycheiniog Arts Centre in Brecon, amongst other projects. 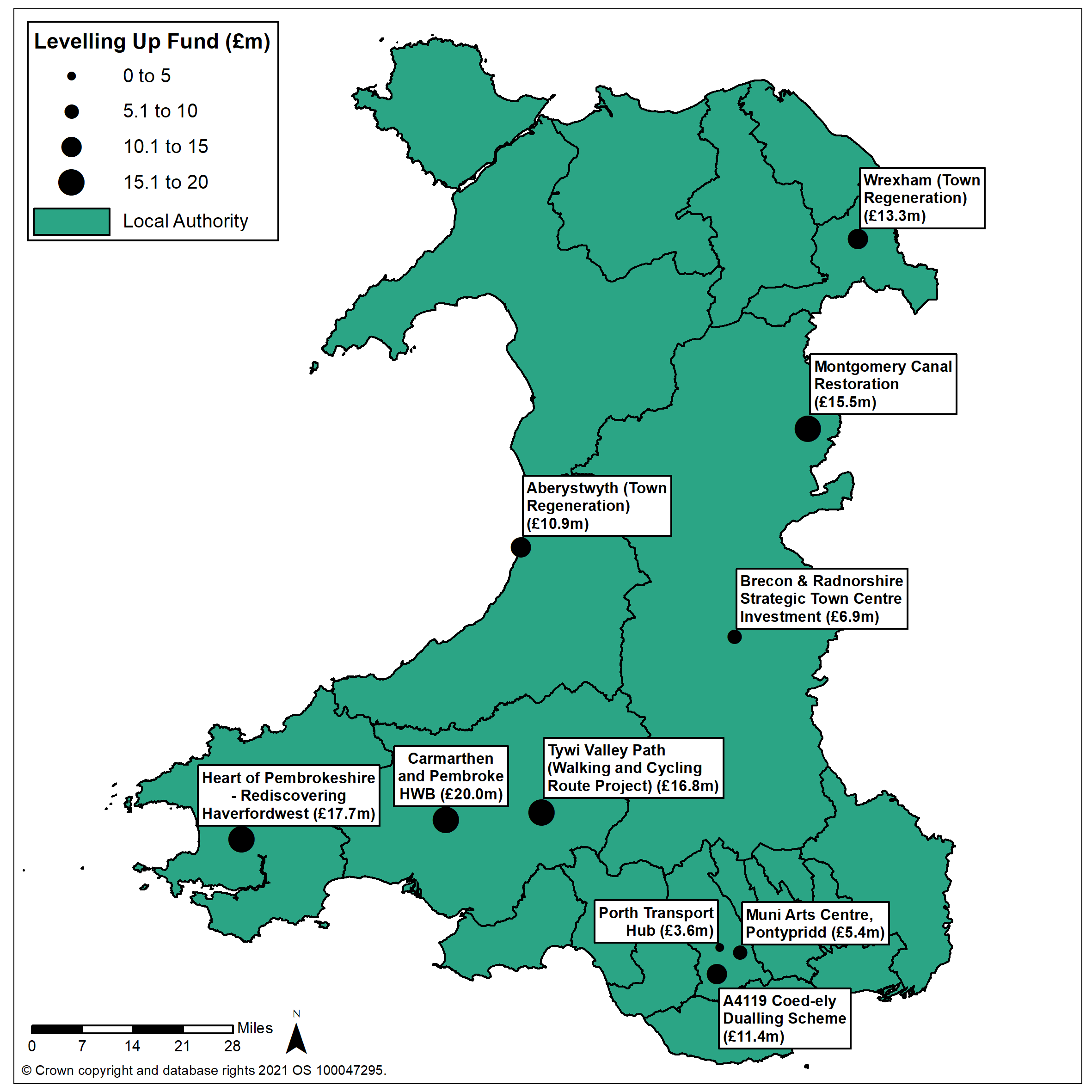 The UK Government also allocated £464k through the Community Ownership Fund for projects in Llandwrog, Pen-y-Waun and Tredegar. It also included details of the first UK-wide SPF project, with £560m allocated to a programme aiming to improve adult numeracy. Normally, funding of this type in England would lead to consequential funding for Wales as it would be funded through a specific Whitehall department. However, as funding is being allocated through the SPF, no additional consequential will be forthcoming.

On 28 October, the Finance Minister, Rebecca Evans described the outlook for living standards and the economy as “mediocre”. She reiterated the Welsh Government’s opposition to allocating funding through the Levelling Up Fund, saying that the funds awarded represent 7% of funding allocated in the first round, compared to the 24% received previously from EU Structural funds. This is despite the UK Government reaffirming in the Spending Review that total funding from the SPF would “at a minimum match the size of EU Funds in each nation”.

The Minister described the first allocations under the Levelling Up Fund as falling short of the “full replacement we were promised to tackle inequality”, before stating:

The Welsh Government’s Draft Budget 2022-23 is due to be published on 20 December and will propose a plan for distributing funding to Welsh Government departments. Senedd Committees will scrutinise the proposals and report their conclusions by 4 February, before a Plenary debate on 8 February.

The Final Budget for 2022-23 will then be published on 1 March and on 8 March will be debated and voted upon.