After Brexit, European citizens who were living in the UK before 31 December 2020 must have applied to stay by 30 June 2021. The UK Government’s EU Settlement Scheme (EUSS) remains open to receive late applications and for second applications from those seeking to convert a temporary status to a permanent one.

In total, almost 7 million applications had been made to the EUSS by the end of June 2022, one year after the deadline passed.

The Senedd’s Equality and Social Justice Committee (“the ESJ Committee”) has chosen to actively monitor the EUSS in Wales and reports regularly to the Senedd. It recently published its first annual report detailing its concerns for European citizens, including Ukrainians fleeing the war.

This article summarises the ESJ Committee’s findings using the latest statistics, to 31 March 2022. For background, see our previous articles on the EUSS.

102,500 of these applications received a decision. Successful applicants are granted either ‘settled’ or ‘pre-settled’ status.

Unsuccessful applicants may be able to apply again, ask for the decision to be reviewed or appeal.

Our infographic shows the percentage and number of applications from Wales. It shows whether they were received before or after the deadline, whether they received a decision and the outcome. 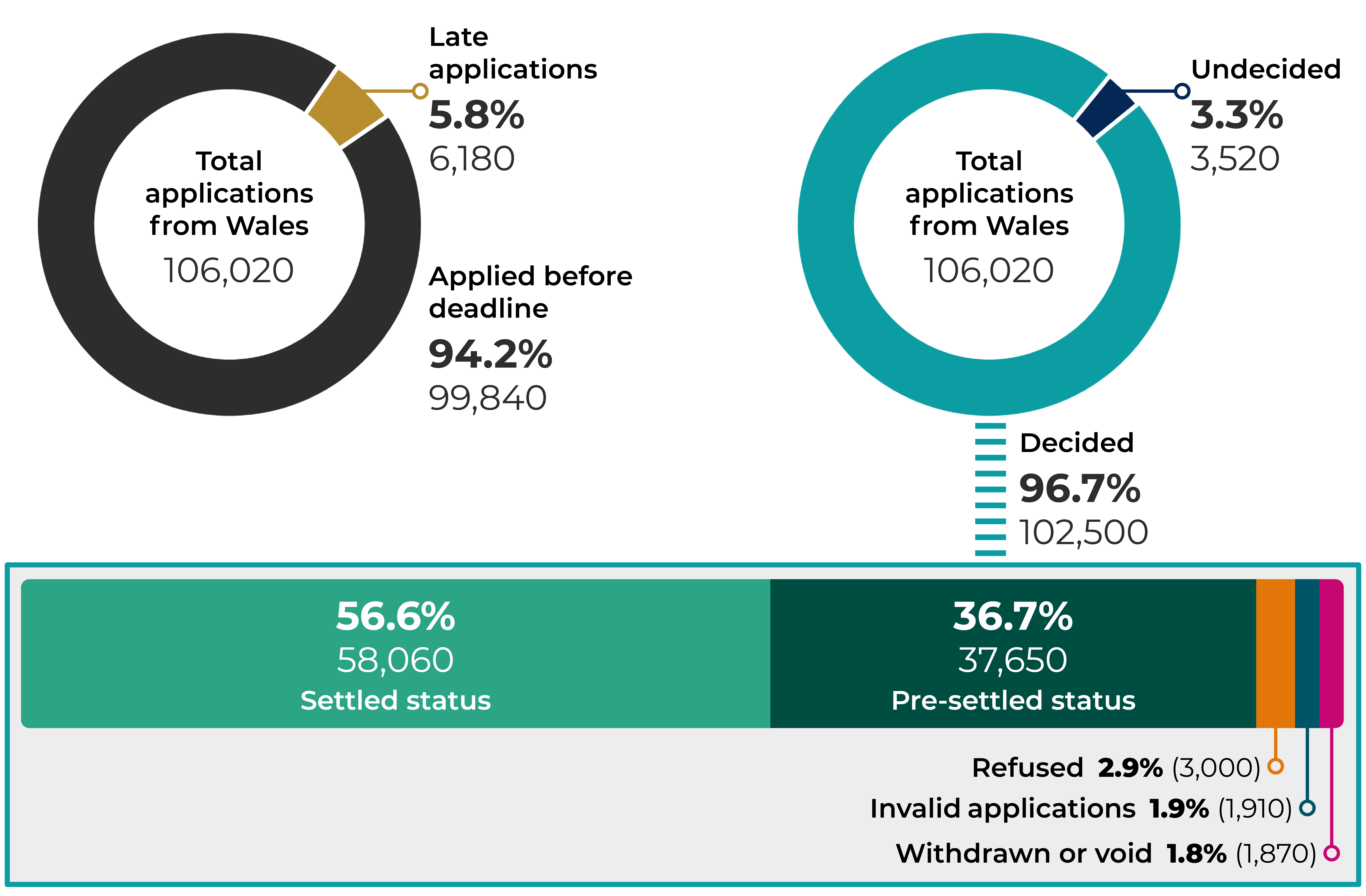 Pre-settled status expires after five years. This means that the 37,650 pre-settled citizens in Wales will need to make a second application for settled status if they want to stay longer.

The interactive map below shows the number of pre-settled citizens in each Welsh local authority area:

UK-wide statistics show that 328,350 pre-settled citizens have already moved to settled status but information by nation is not provided. This means we do not know how many applications have been received from citizens in Wales trying to convert their status.

The ESJ Committee has shared its concerns with the Welsh Government about these statistical gaps in UK wide-data, including seeking clarity on whether it could identify pre-settled citizens to provide additional support, such as extra reminders for second applications, if it chose to do so.

Late applications are allowed if someone has reasonable grounds for missing the deadline, such as a parent failing to apply on behalf of a child or where a person has a serious medical condition. The UK Government promises to protect the rights of late applicants until their application, and any appeal, is decided. 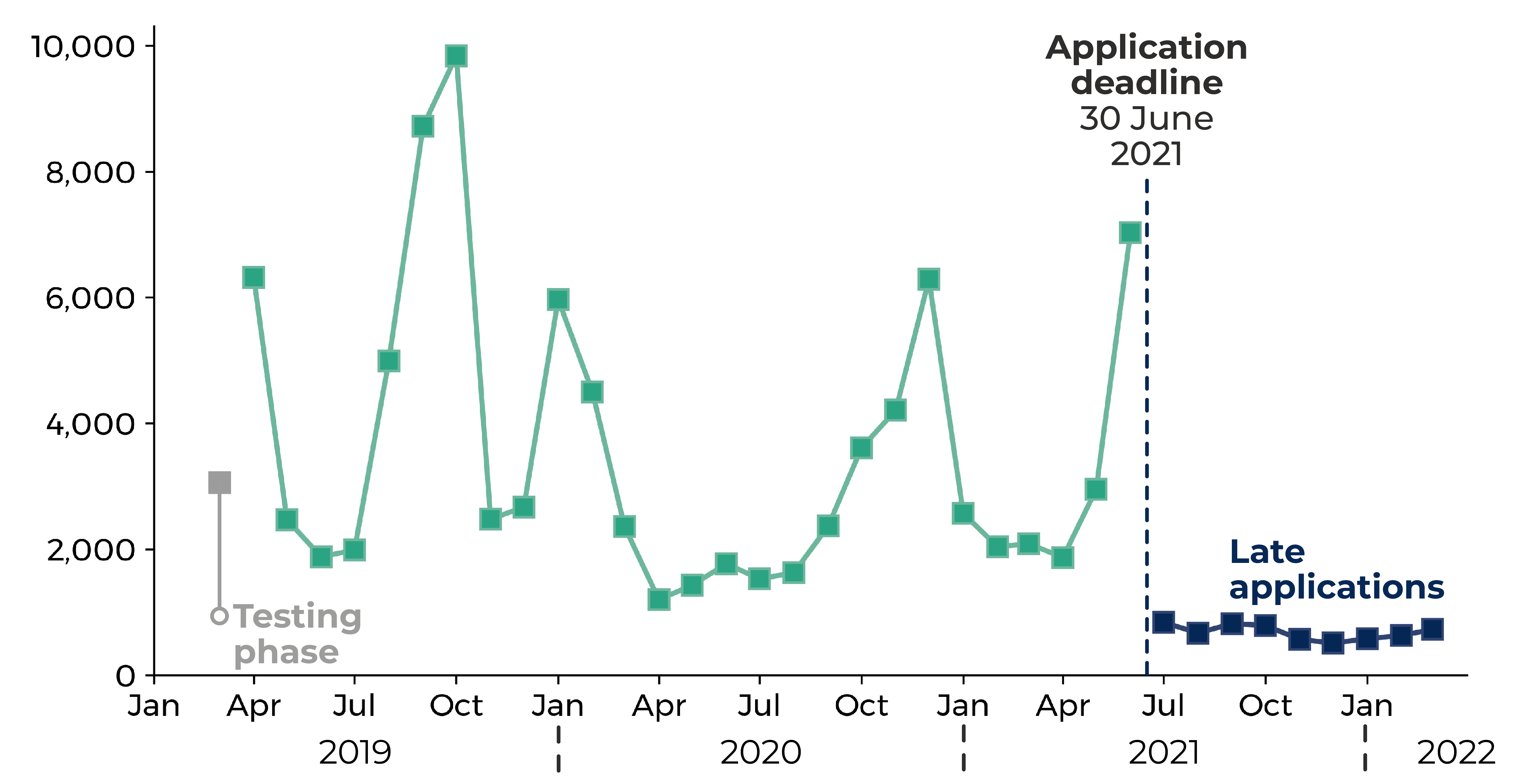 The ESJ Committee agreed to ask the Welsh Government if it is aware of the reason for this month on month increase.

If they come into contact with authorities, those who have not applied to the EUSS will be issued with a 28 day notice to make an application.

The UK Government says that people who don’t apply after this 28 days will not be eligible for work, benefits or services and will not pass tenancy checks. European citizens who have not applied may also be liable to enforcement action, although the UK Government emphasises that deportation will not be automatic.

The ESJ Committee agreed to ask if the Welsh Government is aware of issues relating to citizens who have made no application.

As part of the response to Russia’s invasion of Ukraine on 24 February, the First Minister asked the Prime Minister to extend the deadline for EUSS family permits beyond 29 March 2022 to keep this route open to Ukrainians fleeing the war.

In its report, the ESJ Committee expressed disappointment that the deadline was not extended for Ukrainian family members. It asked the Welsh Government:

The ESJ Committee’s report is available on the Senedd’s EUSS webpage. It will consider the Welsh Government’s response and agree next steps when the Senedd returns from Summer recess.