European citizens who were living in Wales before Brexit needed to apply to stay by 30 June 2021. Over 6.3 million applications had been made to the UK Government’s EU Settlement Scheme (EUSS) as of 30 November 2021.

The EUSS remains open to receive late applications. Concerns have been raised that those who missed the deadline automatically became illegally resident in the UK on 1 July 2021. However, the UK Government has promised to protect the rights of those with reasonable grounds for missing the deadline.

This article presents the latest quarterly statistics up to 30 September 2021, including how many late applications continued to be made from Wales after the deadline. It provides updated infographics tracking the progress of the EUSS in Wales and summarises the latest actions taken by the Senedd’s Equality and Social Justice Committee and the Welsh Government. Our previous article covers applications received before the deadline.

Citizens’ rights form key parts of agreements reached between the UK, the EU and other European countries as part of Brexit. The Welsh Government must adhere to these agreements and the Welsh Government’s Minister for Social Justice, Jane Hutt, is responsible for EUSS-related activities in Wales.

Successful applicants are granted a status of either ‘settled’ or ‘pre-settled’. These are explained in detail in our previous article.

Since the EUSS opened, 57.2% of applicants have been granted settled status and can remain in Wales indefinitely, however, they lose their status if they spend more than five years in a row outside the UK. 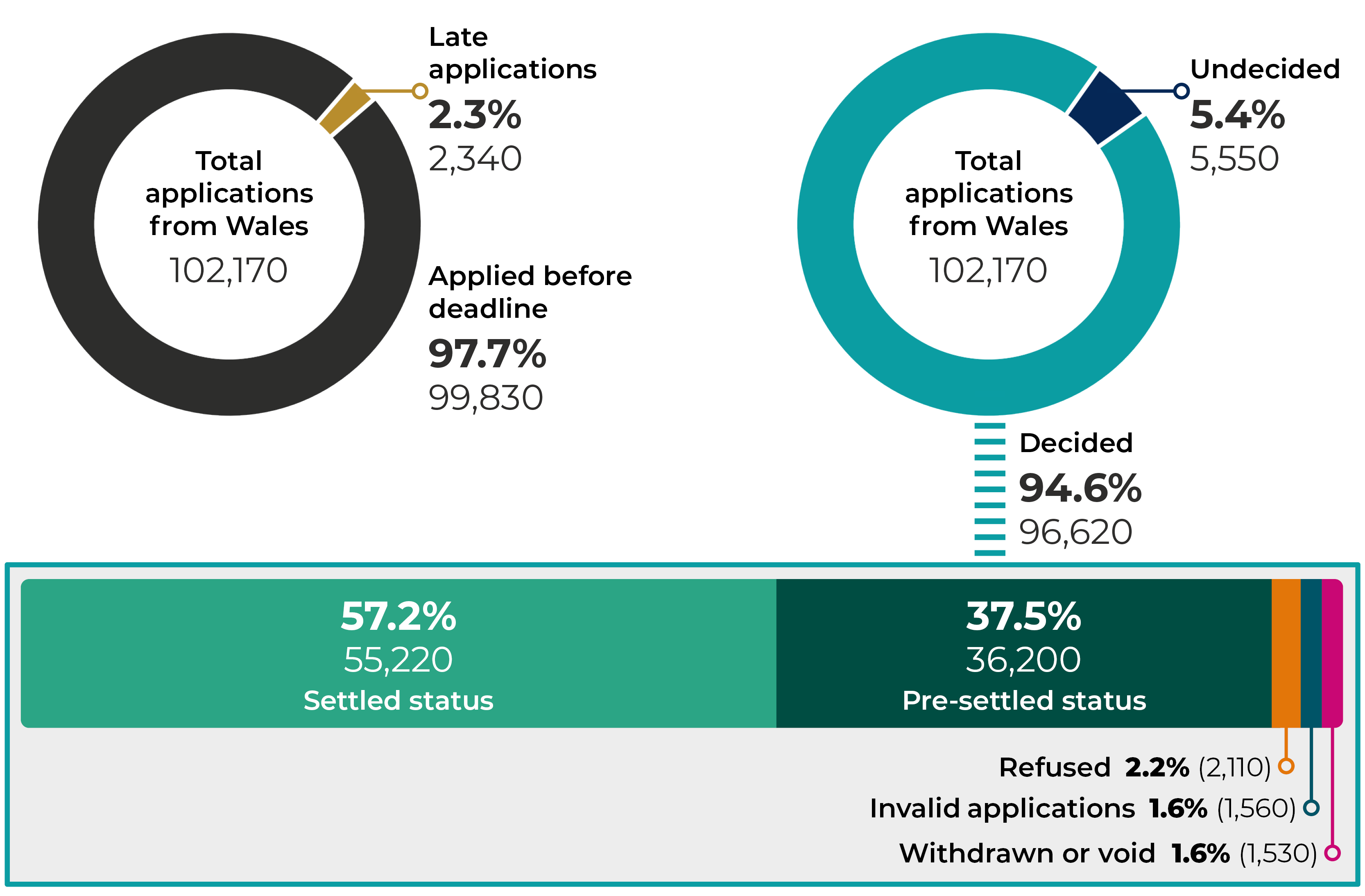 European citizens who have lived in the UK for less than five years, but arrived in the UK before 31 December 2020, are granted pre-settled status.

Failure to reapply results in the automatic loss of a person’s right to work, access housing, education and benefits, and they could be liable to removal from the UK.

The body responsible for monitoring European citizens’ rights in the UK, the Independent Monitoring Authority (IMA), believes that this automatic loss of rights is unlawful because it breaches the UK’s agreements with the EU and other European countries. IMA has initiated judicial review proceedings against the UK Government to challenge this.

The interactive map below shows the number of pre-settled citizens in each Welsh local authority area as of 30 September 2021:

The number of those applying to convert their status from pre-settled to settled status are captured in statistics on repeat applications.

This means that we do not know how many applications have been received from pre-settled citizens in Wales trying to convert their status.

Applications continued to be received after the application deadline and these are reported for the first time.

These mark the lowest monthly number of applications received since the EUSS opened in March 2019, as shown below: 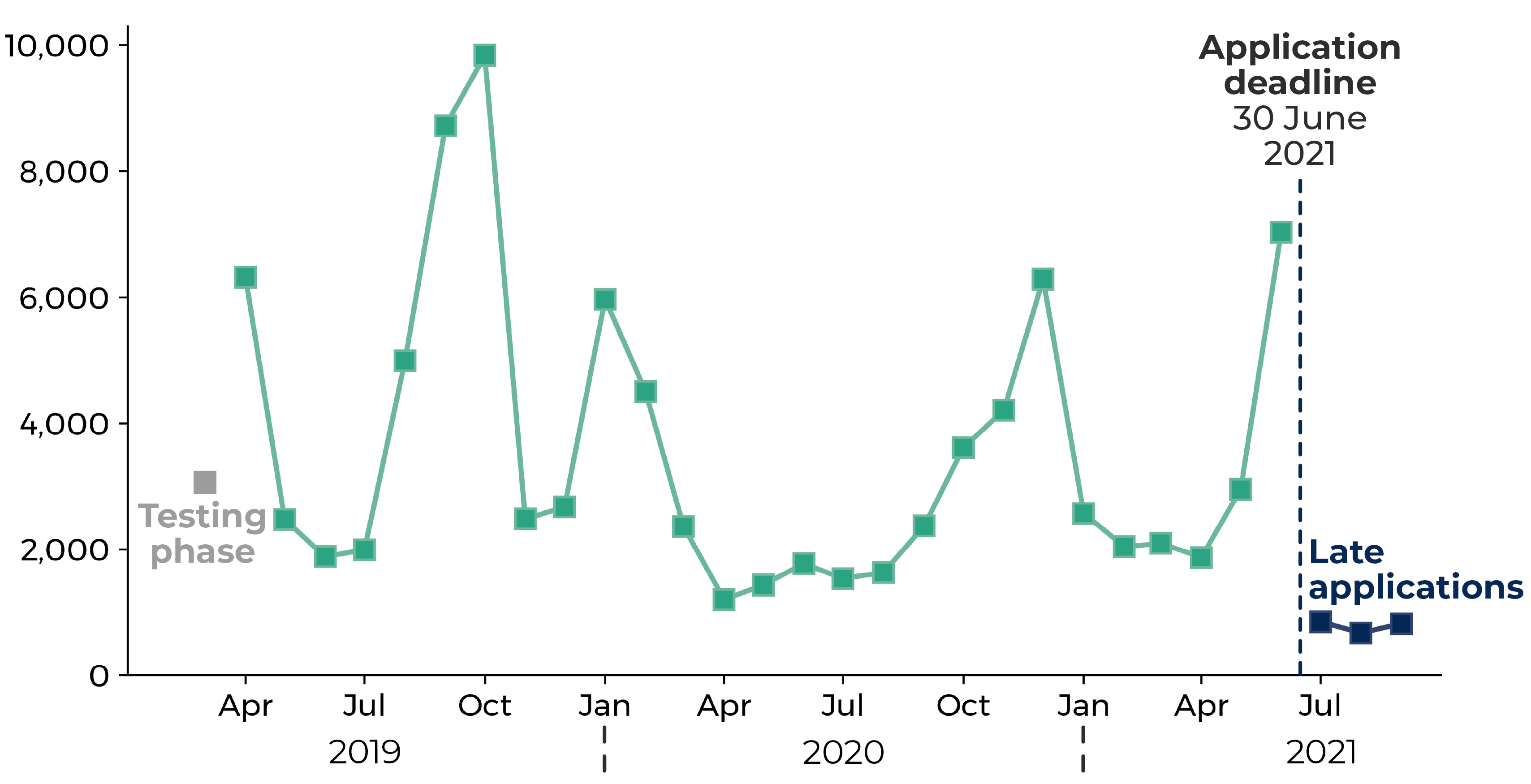 The UK Government advises that late applications will be considered for those who have reasonable grounds for missing the deadline, such aswhere a parent has failed to apply on behalf of a child or where a person has a serious medical condition. It has promised to protect the rights of late applicants until their application and any appeal is decided.

If a person has not applied to the EUSS and they come into contact with UK authorities, they will be issued with a 28 day notice to apply.

The UK Government says that people who have not applied to the EUSS after the 28 day notice period will not be eligible for work, benefits or services and will not pass tenancy checks. They may be liable for enforcement action, although the UK Government emphasises that deportation will not be automatic. Employers and landlords are also required to notify the Home Office of persons who have not applied.

In October, Members of the Senedd’s Equality and Social Justice Committee agreed to:

In response, the Minister for Social Justice provided detail on the Welsh Government’s EUSS Co-ordination Group, described its latest awareness raising activities and explained how it will make use of its recently-extended free advice and support services until “at least” March 2022. More information is available from the EU Citizens’ Immigration Advice Service in Wales.