Both treaties contain devolved matters (such as fisheries, health, the economy and the environment) which the Welsh Government is responsible for implementing.

Together, they establish 32 new forums for the UK and EU to discuss and decide on how to implement the agreements, including on matters which are devolved to and/or affect Wales. This process is only just beginning and the Welsh Government and stakeholders have emphasised the importance of Wales having a seat at the table.

While the UK is mainly represented by the UK Government, the devolved governments have attended some meetings. The EU is represented by the European Commission, although the EU has agreed internal arrangements to allow Member States to attend.

This article sets out the new arrangements and explains how Wales has been represented so far. Our previous articles give an overview of the TCA and show the responsibilities of Welsh Ministers in UK-EU relations.

The Withdrawal Agreement (WA) establishes eight new UK-EU forums. The main forum is the Joint Committee which is supported by six Specialised Committees on:

An additional joint consultative working group was established to assist the Specialised Committee on the Northern Ireland Protocol.

Our infographic shows the UK-EU forums established by the Withdrawal Agreement. 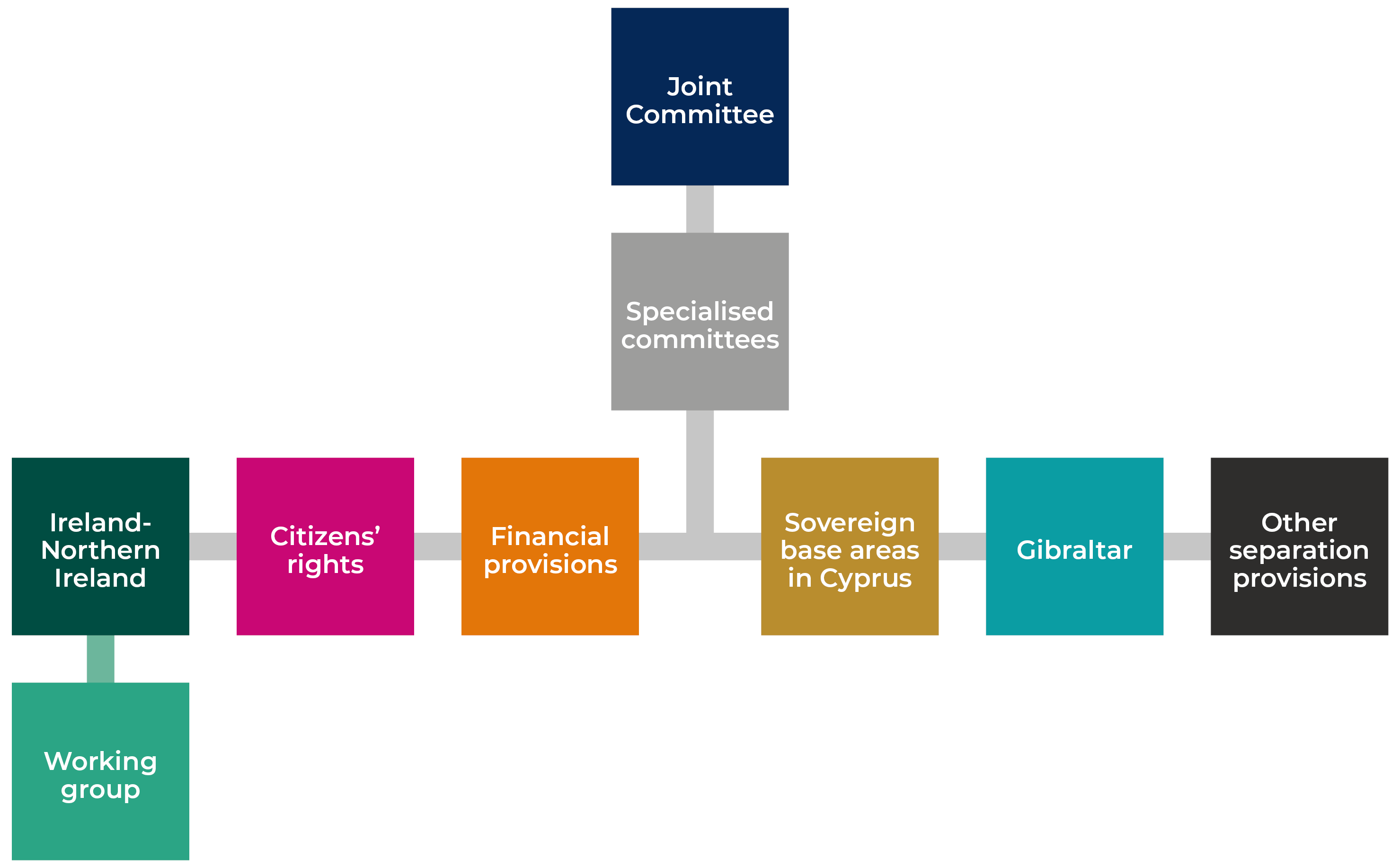 To date, there have been eight meetings of the Joint Committee, whose 2020 Annual Report was published in July. The report provides an overview of Withdrawal Agreement activity from when it came into force on 1 February 2020 until the end of the transition period on 31 December 2020.

The Trade and Cooperation Agreement (TCA) establishes 24 new UK-EU forums with the option to establish more. Use the drop-down menus below to find out more.

The main forum is the Partnership Council which is supported by:

The TCA establishes mechanisms for the EU and UK to engage civil society jointly and in their own capacity. This will be via:

The UK Government consulted on engagement with business and civil society groups and issued an Expression of Interest for membership for a single UK DAG. The first DAG meeting will take place in December.

The TCA includes an option to establish a Parliamentary Partnership Assembly (PPA) between the UK and European Parliaments. The PPA would be able to make recommendations and request information of the Partnership Council and will be informed of its decisions. On 21 September, the UK Parliament’s representatives, Lord Kinnoull and Sir Oliver Heald, responded to a request from committees in the devolved legislatures, saying they would “seek to involve” them in the work of the PPA. On 16 November, the House of Lords confirmed that the UK delegation will comprise of 21 MPs and 14 Lords members and that “observers” from the devolved legislatures will be invited to attend, subject to the agreement of the European Parliament. The European Parliament formally agreed to appoint its delegation, to consist of 35 members, on 5 October.

Our infographic shows the new UK-EU forums established by the TCA and whether the Welsh Government has attended. 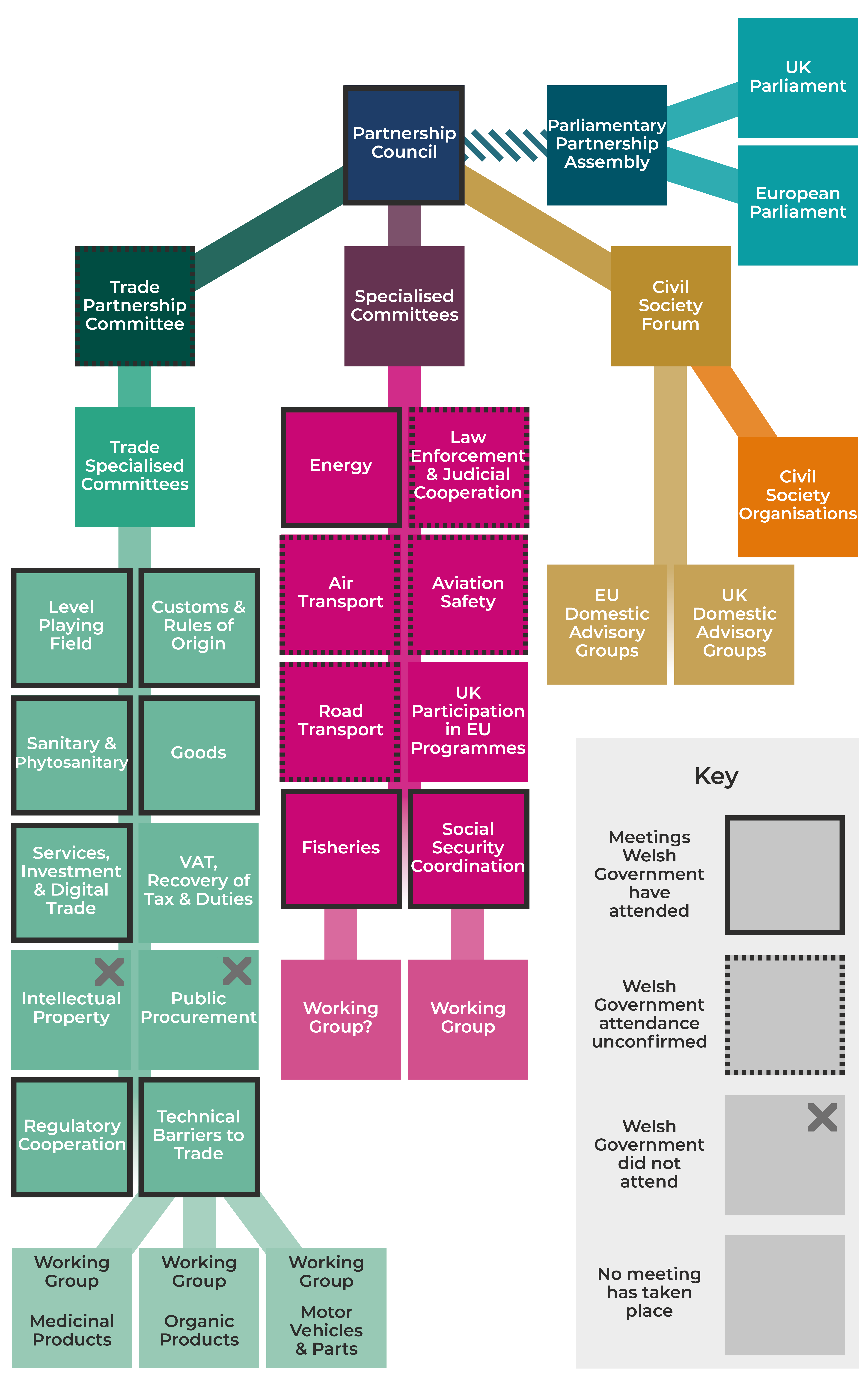 Source: European Commission, Meetings of the EU-UK Partnership Council and Specialised Committees under the Trade and Cooperation Agreement

It is for the UK and EU to determine their own delegations for meetings. On 1 July, the UK Government confirmed that the number of members of each delegation will vary in number, depending on the agenda.

This followed a letter from the UK Government’s Lord David Frost to the devolved governments, which set out how he intends to involve them in UK-EU forums established by both agreements.

The letter confirmed that most forums would be co-chaired by officials from the corresponding lead Whitehall Department, supported by Lord Frost’s Cabinet Office team, but that devolved governments could attend where items of devolved competence are on the agenda.

However, this is subject to the final discretion of the UK co-chair. Preparation for such meetings should also involve representatives from the devolved governments “as a matter of normal practice.”

Use the drop-down menus below to find out more about Welsh Government attendance at UK-EU meetings.

On 9 June, the first meeting of the TCA’s Partnership Council took place. The Welsh Government’s Minister for Economy, Vaughan Gething, attended as an observer. After the meeting, he wrote to Lord Frost describing this as a “deeply unsatisfactory” position which the “Welsh Government cannot credibly support”.

On the WA’s Joint Committee meetings, which the Welsh Government does not attend, the Minister reiterated his request to attend when matters relating to Northern Ireland are discussed, given their implications for Welsh ports. On 23 November, the First Minister confirmed this request has been denied.

The UK delegation to TCA committees has included officials from the Welsh Government for the first meetings on social security coordination, energy, fisheries and most trade-related meetings.

They were not part of the UK delegation at the meeting on public procurement, a devolved area, nor on intellectual property, a reserved matter.

Attendee information for the remaining meetings that have since taken place is not yet publicly available.

Direct contact between the devolved governments and the EU

Lord Frost’s letter emphasised that the devolved governments should inform the UK Government of the “fact and content” of their direct contact with EU institutions and/or Member States.

Direct contact between Wales and the EU has continued. In January, the First Minister wrote to European Commission President, Ursula von der Leyen, to set out a “positive vision” for constructive Wales-EU engagement. He also recently advised the Senedd how Welsh Government officials maintain formal contact with EU institutions and MEPs, and that:

The imminent appointment of the Welsh Government’s Representative on Europe […] will add a positive and significant extra dimension to this.

Stakeholders have raised the importance of Welsh representation in TCA structures. In a joint consultation response, the Wales Governance Centre and Wales Council for Voluntary Action told the Senedd that:

Given the intersections between the TCA and devolved competence, it is important that UK representation in [UK-EU] structures is inclusive of perspectives from Wales.

The Senedd will continue to monitor how Wales is represented in the new UK-EU relationship.