Is this the Brexit season finale?

For many, the announcement of a deal between the UK and EU on Christmas Eve 2020 marked the end of the long-running Brexit negotiation drama. In reality, the agreement forms the bare outline of the future relationship plot. The twists and turns of what the relationship means in practice will be a key part of the Sixth Senedd’s story.

At first glance, the UK-EU Trade and Cooperation Agreement (TCA) is a free trade deal like any other. Yet it’s much more than that. It covers many areas not usually found in trade agreements such as health and social security. Its terms are lengthy, intertwined and complex. The majority of its provisions affect areas within the Senedd's responsibility, from fisheries arrangements to healthcare insurance.

Many of the details about how the TCA will work in practice are not yet clear. Welsh businesses and citizens still face uncertainty about what it means for them.

The Sixth Senedd may find that the drama is far from over.

What’s been agreed and what does it mean for Wales?

The TCA lays the foundation for the UK and EU’s new relationship. It follows the Withdrawal Agreement, which set the terms of the UK’s separation from the EU.

The TCA is unprecedented because it resets the relationship between the UK and EU, in a way which puts them farther apart, rather than bringing them closer together.

Even though it covers many areas of UK-EU cooperation, some important arrangements are not yet finalised. 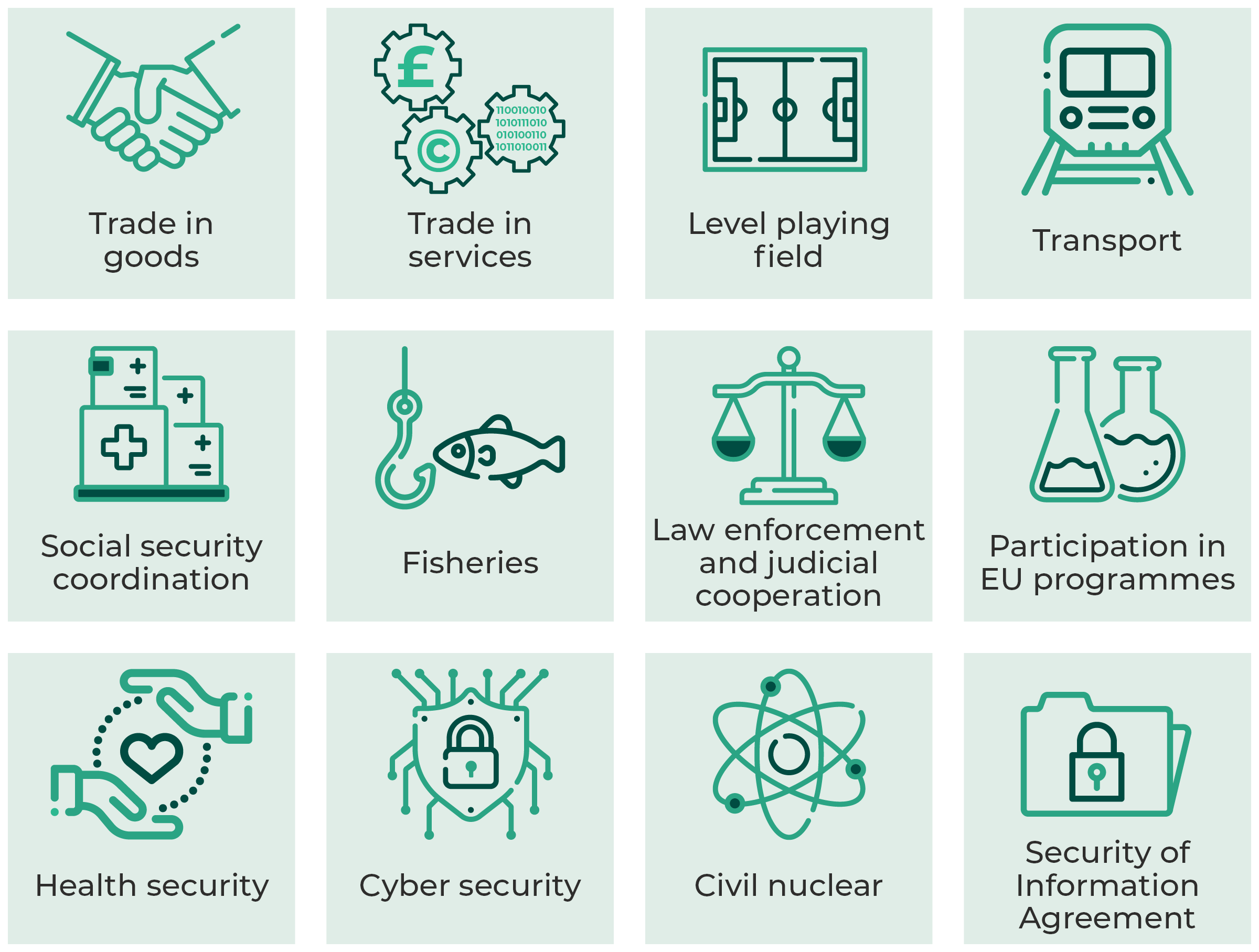 The TCA will shape many parts of life in Wales, such as business and trade environment, fisheries, health, travel.

The way the UK trades with the EU has fundamentally changed. In the TCA, the UK and EU agreed that there are no tariffs or quotas on trade in goods, provided rules of origin are met. However, there are new non-tariff barriers which have resulted in increased costs for businesses. Some sectors, such as some shellfish producers, have also been unable to sell their produce to the EU due to its rules on trade with third countries.

The EU introduced full border controls on goods from Great Britain on 1 January, while the UK will phase-in its border controls in stages until March 2022. New border infrastructure will need to be built in Wales, and the new Welsh Government will have some responsibilities in relation to border processes, such as checks on animals.

The previous Welsh Government said that “the precise impact of the TCA will take time to become clear in many areas”. The Sixth Senedd will need to monitor its impact on Welsh businesses trading with the EU, as well as scrutinising how the new Welsh Government implements its responsibilities.

Environmental cooperation is folded into the TCA in a number of ways. On one hand, it makes up part of the so-called ‘level playing field’ to ensure fair competition between the UK and EU so that standards can’t be reduced without consequence. On the other, the entire partnership is based on a commitment to address climate change, which constitutes an essential element of this and all future UK-EU agreements.

Different types of UK-EU cooperation on health are included in the TCA. For example, there’s a general duty to cooperate on serious cross-border threats to health. There are also specific provisions maintaining the validity of European Health Insurance Cards (EHIC) until their expiration, and on the rights of UK citizens travelling in the EU to access some types of healthcare, and vice versa.

Rules on travel from Wales to EU countries, Switzerland, Norway, Iceland and Liechtenstein have changed under the TCA for holidays, work, study and residency. Changes include visa and permit requirements (depending on the length of stay and the country visited), additional passenger checks and new rules for driving, pet travel, mobile roaming and compensation if travel is disrupted.

The TCA contains a number of future deadlines on decisions not taken in December 2020, including establishing new bodies to implement the agreement, and for the review of some of its provisions. Important deadlines fall during this Senedd’s term.

The agreement establishes 24 UK-EU committees and working groups. They’ll play a crucial strategic role in overseeing and implementing the agreement, as well as on its future direction and content. Their membership, including what role devolved governments will play, is not yet agreed. A UK-EU Parliamentary Partnership Assembly will also be established. Discussions on its format and how it will engage the devolved legislatures are on-going.

A joint review of the UK-EU agreements is required every five years. The agreement also allows either the UK or the EU to call for a review of the agreement’s trade provisions after four years if they believe that either side is not honouring its commitments on fair competition. This could lead to further changes in the trading relationship. Other parts of the agreement could also be included within this review.

The agreement is complex and many of its provisions are yet to be ‘road-tested’. Agreeing how the text should be interpreted, and how it should operate in practice, is likely to take some time. For example, the agreement requires that UK and EU environmental supervisory bodies meet regularly and co-operate on the effective enforcement of the agreement’s environmental commitments. What form these meetings will take, who will be involved and what role devolved regulators will have, is yet to be decided.

In addition, discussions will continue on some areas important to Wales where agreement wasn’t reached. These include protected Welsh food and drink names, EU funding programmes and the mutual recognition of professional qualifications (MRPQ).

“Much more to be done”

The list of tasks for the Sixth Senedd in relation to the TCA and the Senedd’s future engagement with Europe is long. As the Fifth Senedd’s External Affairs And Additional Legislation Committee said, “there is much more to be done in terms of assessing the implications for Wales”.

The agreement is new and untested. The details of its practical operation are not yet agreed. It’s dynamic and will evolve and be reviewed during this Senedd. New relationships are bedding in, and the Senedd and Welsh Government will need to define and find their place in these. The effects of the new relationship on the UK constitution, and Wales’ place in World, will unfold as the Sixth Senedd progresses.

While December 2020 may have marked the end of Season 1 of Brexit, Season 2: The new relationship is only just beginning.