Under pressure: how are local government services changing?

Are local government services at a tipping point? Following a decade of austerity, and now a pandemic, what will services look like in the future?

The funding pressures on local government over the last decade have been a catalyst for change in local service delivery. Increasing costs and lower income for local authorities means some services have reduced or are being run differently.

The pandemic put significant new demands on local government, exacerbating existing pressures. The future of local government services is uncertain and how it responds to the challenges will shape those services for years to come.

How has spending on local services changed?

The shape of local authority services has changed significantly over the last decade.

Overall local authority spending has decreased by around 7% since 2013-14 (in real terms), in contrast expenditure on social services has increased by over 10%. Spending in most other service areas has been cut, including in education. Planning and economic development services have been hit particularly hard, as have libraries, culture, heritage, sport and recreation services. 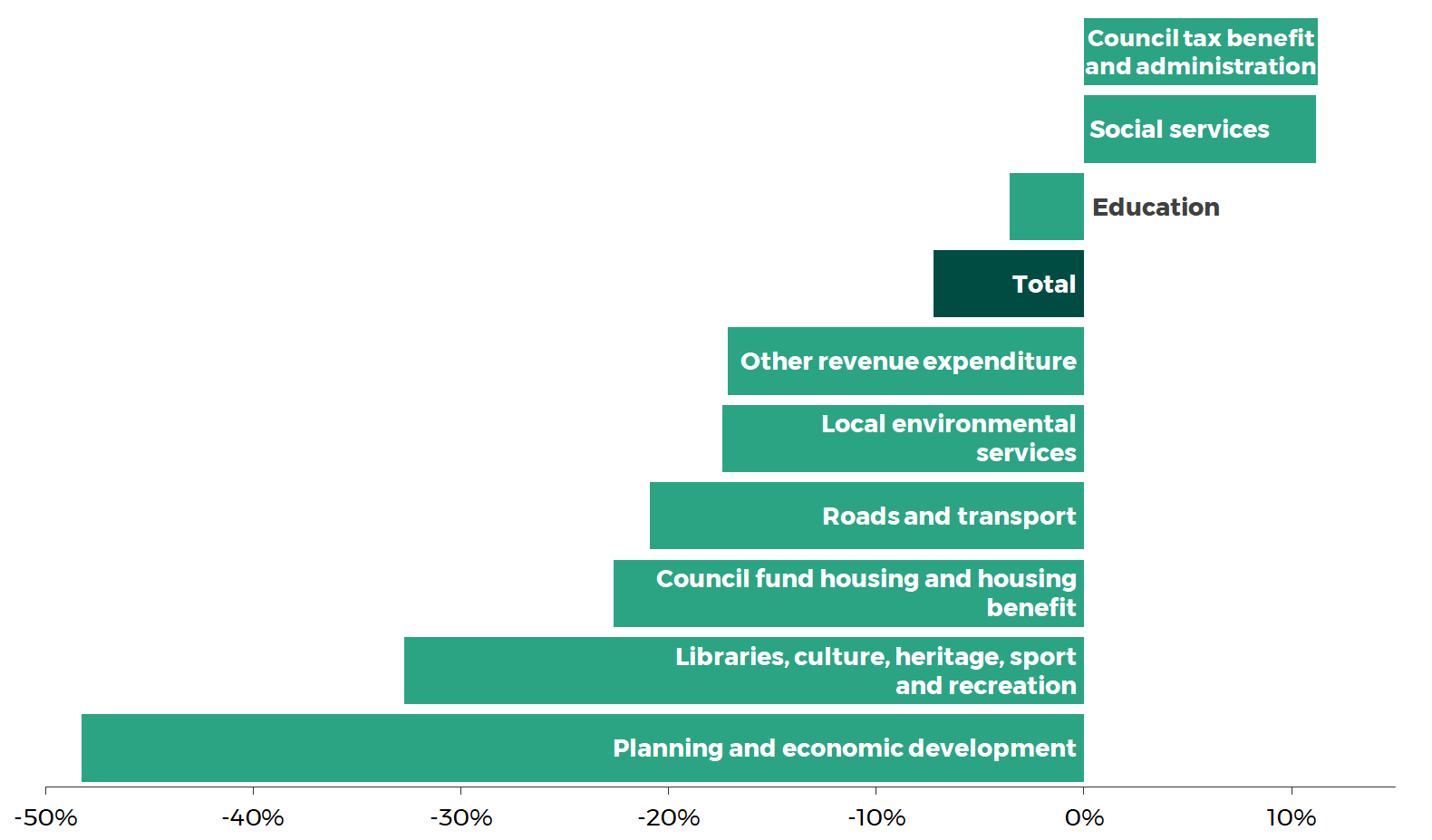 *2013-14 used as baseline due to changes to data collection that make comparisons with previous years less consistent.

Together, social services and education made up over two-thirds of total expenditure on services by the 22 local authorities in 2019-20. 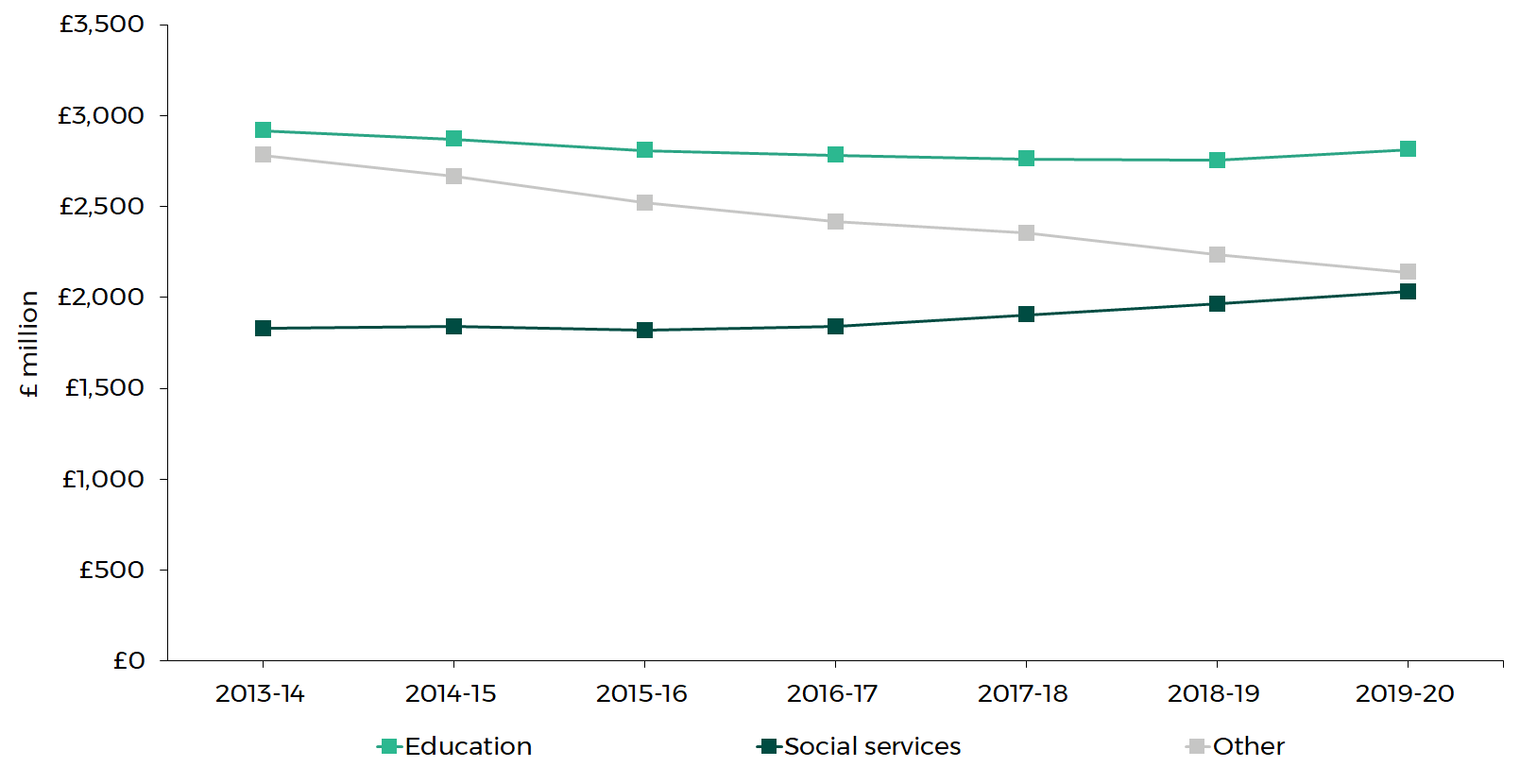 But while social services have been protected from the most severe spending reductions, this won’t be enough to ensure its sustainability for the future. A 2017 report by Wales Public Services 2025 found that:

… spending through local authorities on social care for the over 65s is not keeping pace with the growth in the population of older people. Spending may need to have increased by at least £129 million (23%) between 2015-16 and 2020-21 to get back to the equivalent spend per-head in 2009-10.

Wales Fiscal Analysis notes that, while future demand for care can’t simply be linked to growth in older populations, a projected growth in older people with complex care needs is highly likely to result in increased pressure on care services. It details that the number of older adults living with severe dementia is expected to double to 53,700 by 2040. The Inter-Ministerial group on paying for social care estimated in a ‘high-cost’ scenario that, between 2019-20 and 2022-23, the net costs of social care could increase by almost £400 million.

Wales Fiscal Analysis projects that by 2025-26, social services could account for 55% of all local government spending pressures, with school pressures accounting for a further 21%.

The overall increase reflects annual increases in council tax paid by residents over the period. With average band D council tax (excluding the police element) increasing in real terms by £186.

However, local authorities have consistently warned that raising council tax is not, on its own, sufficient to fill funding gaps in the future. Despite a recent boost to local government finances, there are potential signs of turbulence ahead.

Following the UK Budget 2021, Wales Fiscal Analysis notes that, “the UK government’s medium-term spending plans make for a more austere outlook for the Welsh budget and Welsh public services” and outline the possibility of a return to austerity for parts of the Welsh budget.

The financial impact of the pandemic on local government is likely to be felt for many years. Audit Wales notes that, even in local authorities generating a budget surplus in 2018-19, some had significant overspends in demand-led services like social services. It suggests those pressures are likely to intensify as a result of the pandemic.

Local government has in the last few years embarked on a journey to transform how it delivers services. Local authorities are thinking differently about how to improve services for users, while reducing the cost of running them. An example of this is ‘one-stop-shops’ or ‘hubs’. These hubs host multiple council services under one roof, such as libraries, money advice and adult learning services.

One of the most significant aspects of the transformation programme is to make better use of technology and digital tools. The previous Welsh Government established a Local Government Digital Transformation Fund to “maximise and identify opportunities to progress the digital transformation of local government in Wales”.

The Digital Strategy for Wales, launched in March 2021 is another step in this journey. It sets out a national vision for digital transformation, and seeks a cultural shift in how public bodies “deliver and modernise services” that are designed around user needs.

In the past year, local authority resources have been diverted from some of this transformational work. Anticipated financial savings are less certain, with the WLGA recently suggesting there’s doubt about when, and indeed if, some of those savings will now happen.

Yet there are examples of how the pandemic has sped-up digital change across local government:

Developing on areas of digital innovation and good practice will likely be one priority area for the next Minister with responsibility for local government.

What next for local government?

The passing of the Local Government and Elections (Wales) Act 2021 gives local authorities new tools and powers to deal with some of the many challenges facing the sector.

For example, the Welsh Government suggests the general power of competence within the Act enables local authorities to consider more transformative approaches to service delivery. The Act also lays the groundwork for Corporate Joint Committees (CJCs), bodies designed to enable greater regional working and collaboration in areas like education and transport.

However, questions remain about how these new bodies will operate. Responses to a recent consultation on CJCs by the previous Welsh Government show there’s still uncertainty about how they’ll function and their associated costs and benefits.

Despite the recent increase in the local government settlement for next year, and the substantial funding support in response to the pandemic, significant challenges remain. Wales Fiscal Analysis suggests that to meet cost pressures over the next few years, spending on local services needs to increase, on average, by 3.4% a year (in cash terms) between 2020-21 and 2025-26.

The WLGA recently reported that core pressures, that’s the financial gap in money coming in and that required to pay for services, could amount to as much as £822 million by 2023-24. Leaning on local taxation, such as council tax, to support key services like social care and education won’t stem the demand for, and cost of providing those services.

The challenges of the last 12 months have nevertheless brought with them opportunities. Local government has adapted quickly to new ways of working using digital approaches to deliver improved and responsive services to users. Sustaining such momentum and investment will be critical to recovery in the coming years.

What might a Universal Basic Income mean for Wales?