The settlement has been welcomed by the Welsh Local Government Association (WLGA). However, the WLGA has also outlined (PDF, 268KB) that local authorities ‘are facing underlying pressures for 2021-22 [that] total £279m’, down to things like workforce costs, demographic changes and inflation.

The funding provided by the Welsh Government, referred to as Aggregate External Finance (AEF) is made up of two parts – general revenue funding through the Revenue Support Grant (RSG) and Non-domestic Rates (NDR). The impact of the pandemic and the Welsh Government decision to freeze the NDR ‘multiplier’ for 2021-22, will lead to lower NDR funding than might have been anticipated pre-pandemic. However, the Welsh Government suggests this is offset by increases to RSG.

How much will each local authority get?

Each individual local authority will experience an increase in day-to-day spending next year, ranging from 2.0% in Ceredigion to 5.6% in Newport.

The infographic below provides a breakdown of the increases. 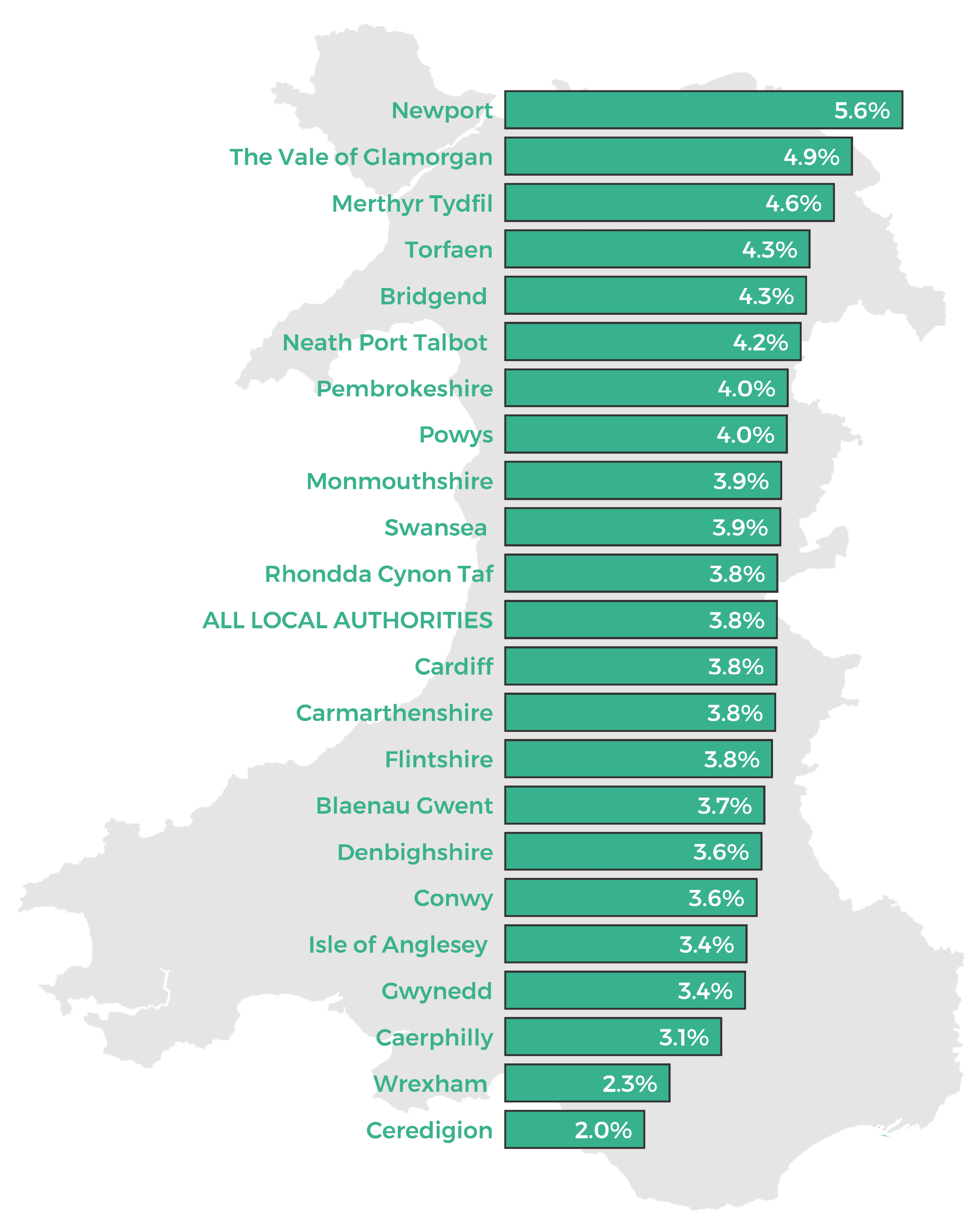 Funding is based on a Welsh Government formula that includes a number of factors, broadly reflecting the services offered by local authorities.

The underlying calculations are detailed in the Welsh Government’s Green Book, published each year. At the time of preparing this article, the most recent version available is for the 2020-21 Settlement (August 2020). The calculations for the allocations for 2021-22 are unlikely to be released until next autumn.

In addition to day-to-day spending, the Provisional Settlement outlines general capital funding – which is set at £198m - and provides an indication of the specific grants available in year (e.g. the Pupil Development Grant and Housing Support Grant, among others); £1.0bn for revenue and £724.0m for capital.

The Settlement provides funding for the day-to-day services offered by local authorities, it doesn’t include specific funding for COVID-19 (although some COVID-19 related grants are outlined).

The Minister for Housing and Local Government confirmed in her statement that funding for local authorities associated with the pandemic will be considered separately. This reflects the way in which funding has been allocated in 2020-21, with allocations relating to the pandemic to local authorities mainly made through the ‘Local Authority Hardship Fund’.

At the time of its Draft Budget, the Welsh Government reported it had received £766m in the UK Spending Review in consequentials for 2021-22 as a result of COVID-19 related spending announcements in England in devolved areas. However, the Draft Budget 2021-22 only allocates £77m in this area, of that £23.3m was allocated for emergency financial assistance for local government.

At the Second Supplementary Budget in October 2020, the Welsh Government had allocated almost £500m in emergency financial assistance for local authorities, over 10% of the total revenue funding provided at the start of the year.

At the ‘Spending Review 2020’, the Chancellor announced a freeze to certain areas of public sector pay (while outlining increases in other areas, such as nursing). While some of those areas are devolved, the Welsh Government has not incorporated a pay increase into its calculations for the 2021-22 Settlement. The Minister for Housing and Local Government has suggested any pay awards will need to be accommodated within local authority budgets.

This is only the Provisional Settlement. Its publication marked the start of a seven-week consultation period that ends on 9 February. Following that, the Welsh Government will publish its Final Settlement, which will confirm what local authorities will receive. Local authorities are also in the process of setting their budgets for 2021-22, including council tax levels.

While the Minister for Housing and Local Government notes that she can’t guarantee there won’t be changes to the Settlement, she says she does not have any intention in making any significant changes to the ‘methodology or the data underpinning the distribution of this Settlement’. Subsequently, the Minister for Finance and Trefnydd suggested to Finance Committee (8 January) that she would ‘certainly looking as to whether further allocations will need to be made in respect of health and local government in particular, as we move forward towards the final budget’.