The Living Wage: What are the latest developments in Wales?

This week is Living Wage Week, the annual celebration of the Living Wage movement in the UK.  A number of events are being held across the UK by the Living Wage Foundation, the body set up by Citizens UK to campaign for payment of the voluntary Living Wage.

With more than one in five workers across Wales earning less than the Living Wage, this issue has been on the political agenda for a number of years.  To coincide with Living Wage Week, Cardiff has been named the first major urban area in the UK to become a Living Wage City by the Living Wage Foundation.

These three terms all sound similar, but refer to different rates of hourly pay:

What does Cardiff becoming a Living Wage City mean for its workers and employers?

To coincide with Living Wage Week, it has been announced that Cardiff will become a Living Wage City.  The Living Wage Steering Group chaired by the Leader of Cardiff Council, with senior representatives from civil society and local employers, has set a number of objectives for Cardiff:

What can the data tell us about payment of the Living Wage to employees in Wales?

The Living Wage Foundation highlights that there are over 220 accredited Living Wage Employers based in Wales, as well as a number of other UK-wide employers that operate in Wales.  These employers include organisations from the public, private and voluntary sectors.

Many of the media articles on this topic use analysis published by IHS Markit for KPMG based on the Office for National Statistics’ (ONS) Annual Survey of Hourly Earnings, which provides slightly different data to that set out below.  IHS Markit’s analysis states that 241,000 jobs in Wales, 21% of all jobs, pay below the Living Wage, and that Wales saw the largest percentage decrease in jobs paid below the Living Wage of all UK nations and English regions except the West Midlands between 2018 and 2019.

The Office for National Statistics (ONS) also publishes data on payment of the living wage on an ad-hoc basis, as shown in the graphics below, with the latest data available for April 2019.  This data shows that there were 268,000 jobs in Wales that paid less than the Living Wage in April 2019, equivalent to 22.6% of all jobs in Wales.

Percentage of jobs that paid less than the Living Wage in April 2019, by UK nation and English region 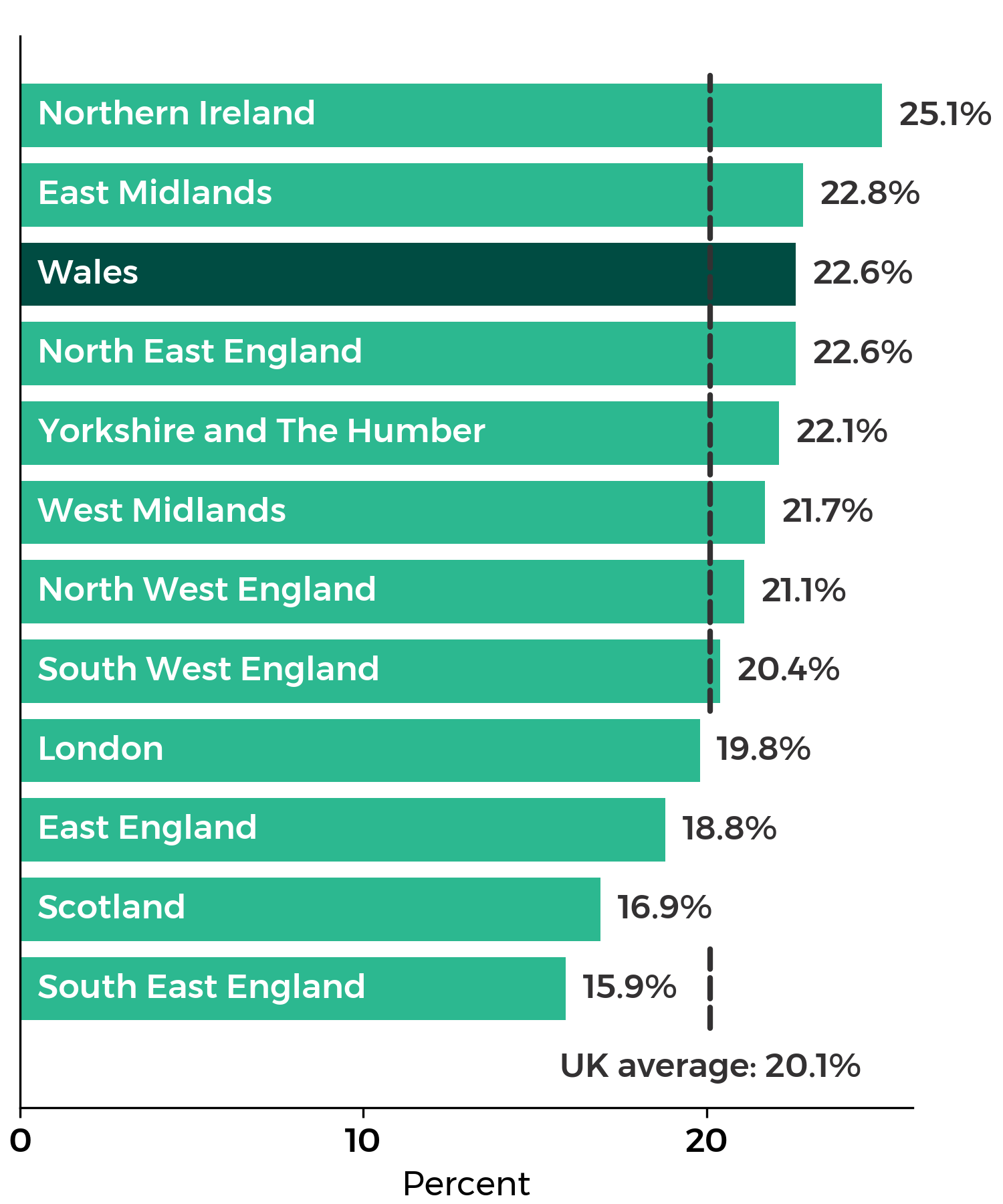 Percentage of jobs in Wales that paid less than the Living Wage in April 2019, by gender

Percentage of jobs in Wales that paid less than the Living Wage in April 2019, by working hours

How is the Welsh Government supporting greater payment of the Living Wage in Wales?

In his leadership manifesto, the First Minister Mark Drakeford AM proposed:

The independent Fair Work Commission set up by the Welsh Government published its report in May 2019.  This made a number of conclusions and recommendations in relation to the Living Wage, including:

The Minister for Housing and Local Government, Julie James AM, announced in Plenary on 7 May that the Welsh Government would accept the Commission’s six priority recommendations.  In a further written statement on 9 July, she announced that the Welsh Government would accept the remaining 42 recommendations of the Commission ‘in principle’, meaning that it will undertake further work on the detail of the recommendations to assess their impact on policy development and delivery, and their cumulative impact.

On 12 November, the First Minister published a written statement stating that he will write to all public bodies in Wales asking them to achieve Living Wage accreditation.

What are governments in the rest of the UK doing in relation to the Living Wage?

The Scottish Government has undertaken a number of actions to promote the Living Wage in Scotland, including working with the Poverty Alliance to create a Living Wage Nation where 25,000 more people in Scotland receive the Living Wage by 2021; launching a regional accreditation scheme for towns, cities and regions; and working to increase the proportion of workers in low-paid sectors such as hospitality and tourism that are paid the Living Wage.  It has also developed a Scottish Business Pledge for employers to show their commitment to fair work through payment of the Living Wage, not using zero-hours contracts and working to reduce the gender pay gap.  In February 2019, it published a Fair Work Action Plan, which includes actions on the Living Wage.

The UK Government has concentrated on increasing pay through the National Living Wage, which it proposes will rise to £10.50 per hour by 2024, to around 60% to 66% of UK median earnings.  An independent review for the UK Government by Professor Arindrajit Dube was published last week on the feasibility of its proposals.

Source for all graphics: Office for National Statistics, Estimates of the number and proportion of employee jobs with hourly pay below the living wage, by work geography, local authority and parliamentary constituency, UK, April 2018 and April 2019