Recovering from the “biggest economic challenge in living memory”

The last year has been the toughest economic period of many people’s lives. What are the challenges and opportunities for securing economic recovery and reshaping the Welsh economy?

The Welsh economy has faced unprecedented challenges since the start of the COVID-19 pandemic.

At the start of 2020, who would have foreseen that many key economic sectors would have closed for some or all of the past year? Or that the Welsh and UK governments would spend billions supporting businesses and workers through the most difficult period of many people’s lifetimes?

The Fifth Senedd’s Economy, Infrastructure and Skills (EIS) Committee concluded that economic recovery will be the “biggest economic challenge in living memory”.

What’s the scale of the challenge?

Key economic indicators show the impact of the pandemic on the Welsh economy. Welsh Gross Domestic Product decreased by 2.4% in the first quarter of 2020, and by 15.1% in the second quarter.

The number of payrolled employees in Wales in April 2021 was 31,000 lower than at the start of the pandemic, with much of this decrease having come in the early months of the pandemic.

Number of people in payrolled employment in Wales, January 2020 to April 2021 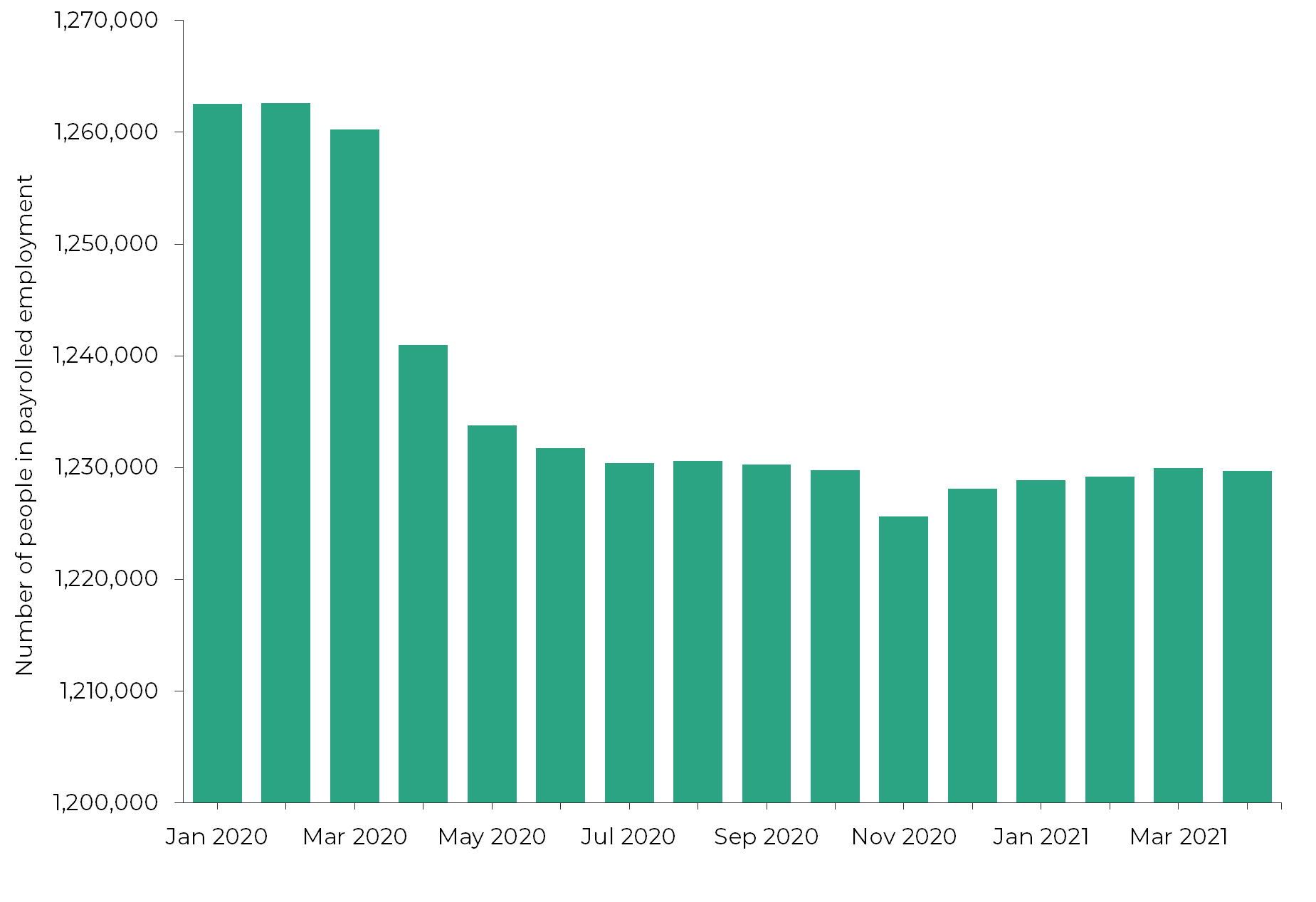 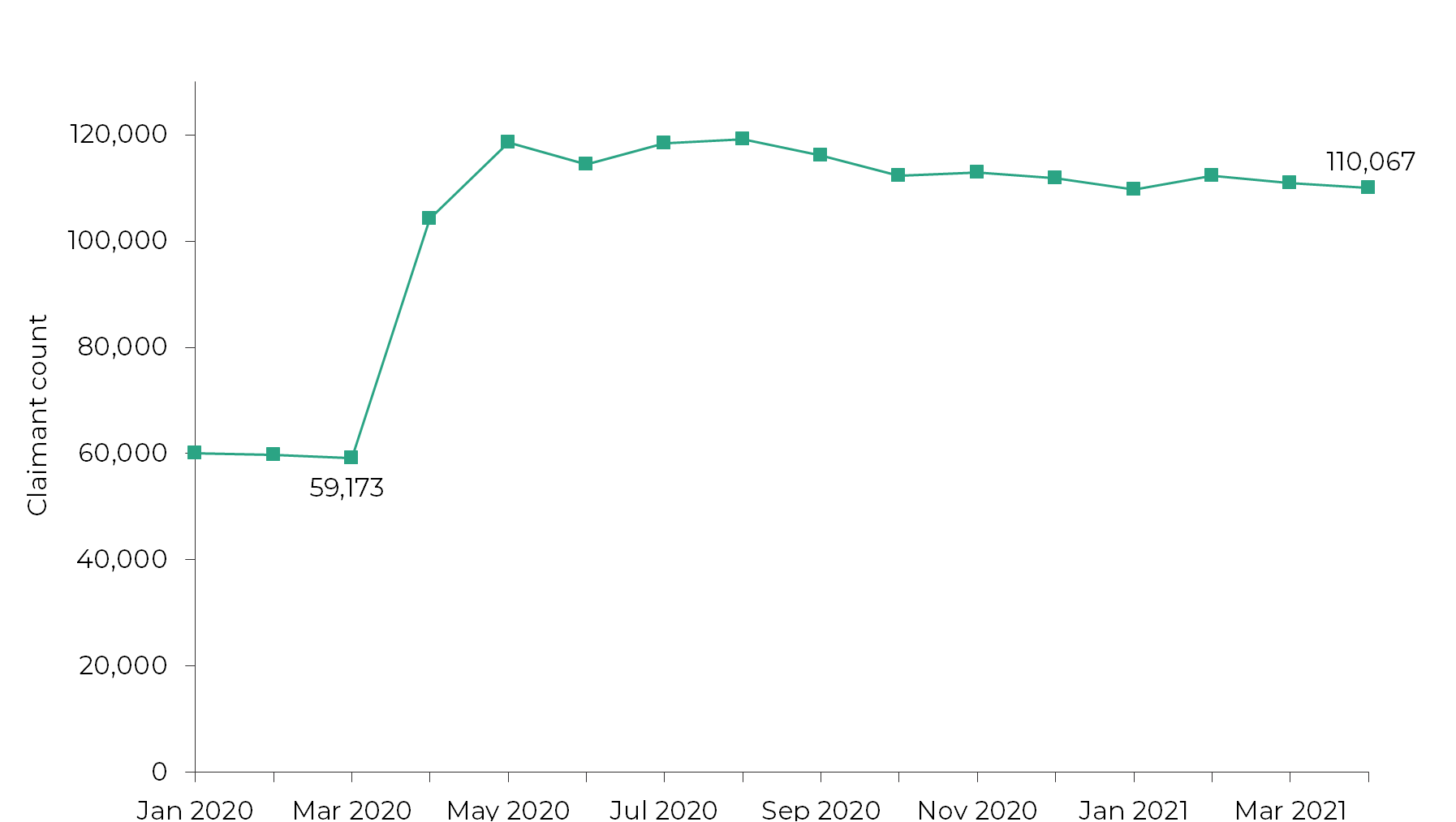 Over 465,000 jobs have been furloughed in Wales since the start of the Coronavirus Job Retention Scheme, and there’s concern from the Resolution Foundation that unemployment will spike when it eventually ends. Monthly data has been available since July 2020, and the latest figures show that 13% of the workforce was furloughed at the end of March 2021.

Percentage of workforce on furlough in Wales, July 2020 to March 2021 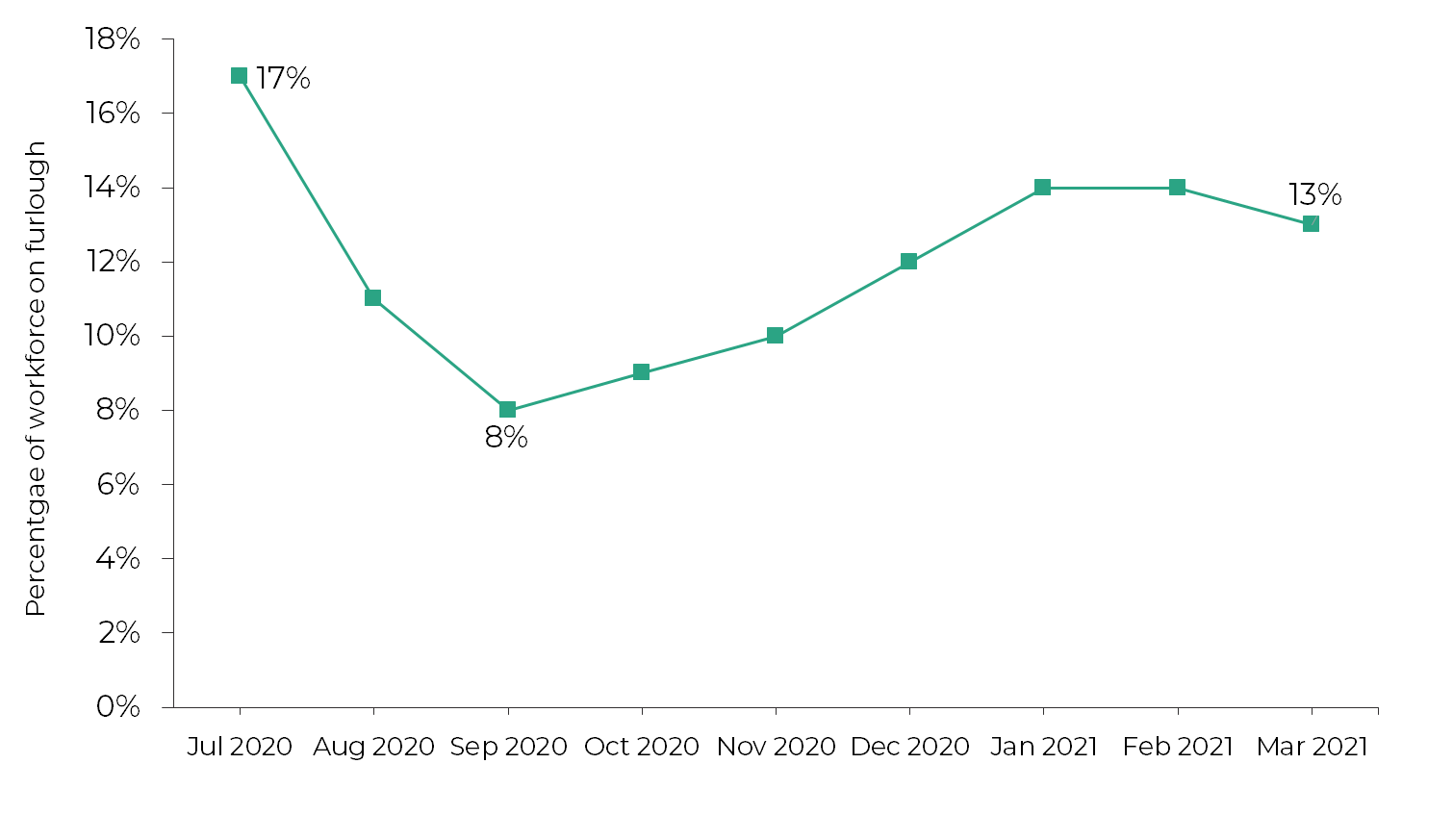 While the Office for Budget Responsibility’s latest forecast predicts a quicker recovery than initially thought, the National Institute of Economic and Social Research projects that recovery will be fastest in London and southern England. It suggests that Welsh employment will recover over the next three years, but that Welsh Gross Value Added and productivity at the end of 2023 will still be lower than before the pandemic.

Predicted percentage change in productivity, employment and GVA in Wales compared to Q4, 2019 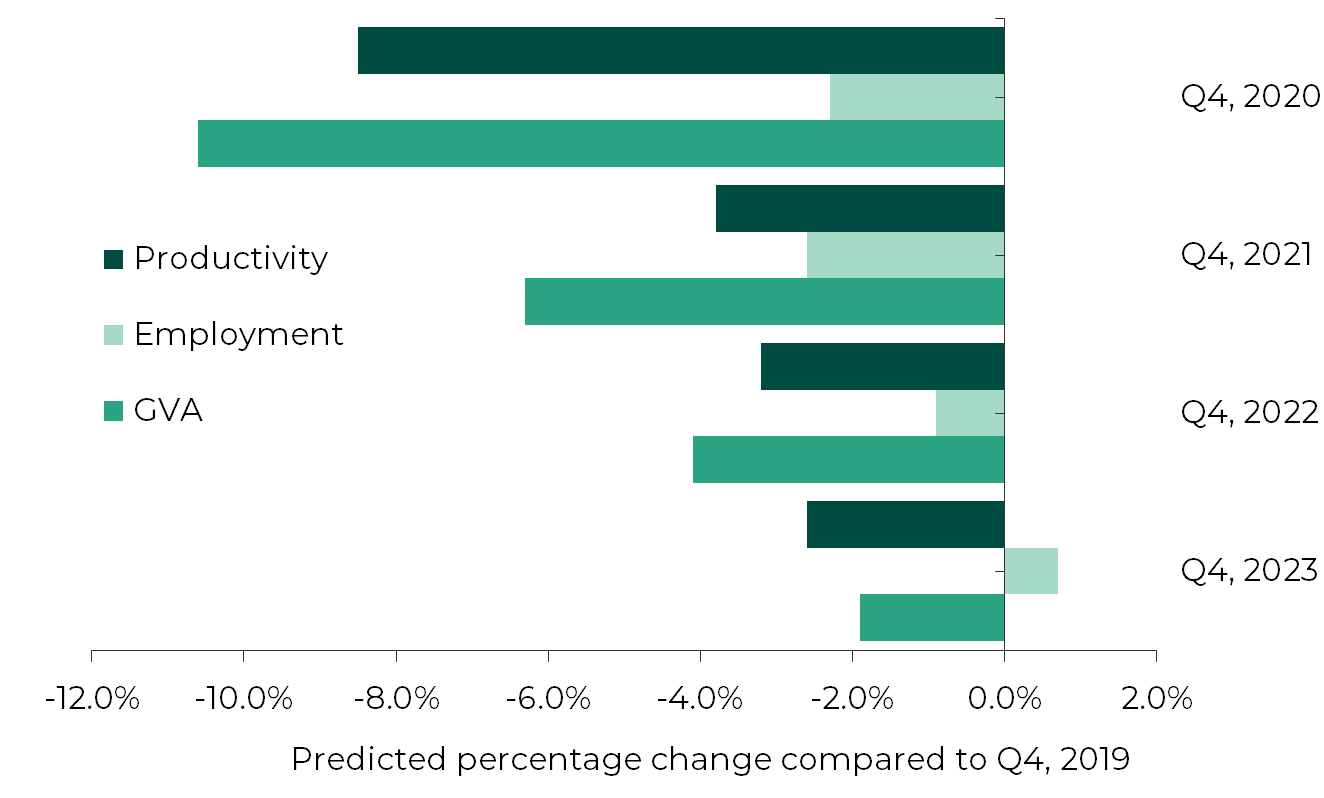 What are the challenges in supporting businesses to recover?

Some key economic sectors have been required to close for some or all of the past year. Long-term support will be needed to help these sectors get back to full strength – the Federation of Small Businesses Wales has pointed to the particular needs of the tourism sector which is “facing three winters”. More detail is available in our article on hard-hit sectors.

The recovery will also need to address underlying challenges. Wales has historically had a lower level of business start-ups than the UK average. Professor Dylan Jones-Evans has called for the new Welsh Government to focus more closely on entrepreneurship as there is “overwhelming evidence that new firms not only create the majority of new jobs in any economy but especially during a recession”.

Wales has lower productivity than other parts of the UK, with output per hour being 17% below the UK average in 2018. Professor Andrew Henley believes that Wales has tended to see tackling low productivity as “too difficult a challenge to address”, and that “in the long run, productivity is really important, and so we have to look at how we're going to address this challenge”. He highlights that spending on innovation and skills will be critical, particularly to support small businesses and microbusinesses.

What impacts on different groups will need to be addressed?

The Centre for Economic Performance at the London School of Economics found that previous recessions disproportionately impacted the youngest, the poorest, and ethnic minorities. This has also been the case during the pandemic.

Young people in Wales were the most likely to work in a ‘shutdown sector’ before the pandemic, and also to be furloughed. There’s concern that we may see a ‘scarred generation’ that experiences long-term effects of youth unemployment. The Fifth Senedd’s EIS Committee called for the next Welsh Government to consider introducing a Youth Opportunity Guarantee for 16-24 year olds to help tackle youth unemployment.

The Resolution Foundation found that low-paid workers are “more likely to have lost their job, or hours and pay, or to have been furloughed”. The Fair Work Commission, established by the previous Welsh Government, made wide-ranging recommendations to deliver fair work. However, the pandemic has added to the challenges many low-paid workers were already facing. In addition to calling for the Welsh Government to fully implement the Commission’s recommendations, the Wales Trades Union Congress has outlined further ways that it believes the next Welsh Government should deliver a fairer society.

Professor Emmanuel Ogbonna’s report for the previous Welsh Government outlined employment and income inequalities that ethnic minorities face. The Wales Centre for Public Policy has proposed actions to address these, including improving workplace representation and progression, tackling workplace discrimination, and addressing the ethnicity pay gap. The previous Welsh Government consulted on its draft Race Equality Action Plan, but it’s for the next government to decide how to take this forward.

Redundancies in previous recessions have tended to be in sectors that mainly employ men. However, women represent 45% of those who have been made redundant since the start of the pandemic, compared to around a third of those made redundant following the 2008 recession. Women have also been more likely than men to work in a ‘shutdown sector’, and since July 2020 more women have been furloughed than men. Chwarae Teg has called for a feminist economic recovery, which recognises that care is as important as the production of goods.

What opportunities are there to change how the Welsh economy works?

Professor Gillian Bristow and Dr Adrian Healy state that building a more diverse economy, place-based development and local ownership will build long-term resilience to future shocks. They say that addressing long-term challenges such as the wellbeing of future generations and shifting to a zero-carbon economy would also build resilience.

There’s consensus around the need for a ‘green recovery’, but different views on what this means in practice. The Confederation of British Industry Wales has called for green infrastructure investment to be prioritised through retrofitting homes and developing electric vehicle charging networks.

RSPB Cymru believes that a green recovery should support the natural environment to recover and resources to be managed sustainably. The Future Generations Commissioner has highlighted the importance of focusing widely across a number of areas and investing in skills for new green jobs.

The previous Welsh Government sought to use the foundational economy to “build resilience in our local economies, to create better jobs closer to home and to build stronger local businesses”. But barriers will need to be removed to achieve this – such as reforming procurement, and addressing low pay and insecure working conditions.

It’s clear that there are significant short and long-term challenges facing the Welsh economy, and that these will be particularly acute in some sectors. However, there are also undoubted opportunities to improve the way that the economy works for all.

There are also a number of questions to which answers will emerge over coming years. What impact will greater remote working have on commuting and work patterns, and how will this affect our town and city centres? What does the future hold in terms of automation and artificial intelligence, and how might these impact on productivity and jobs? The next Welsh Government will need to respond to developments in these areas as well as securing economic recovery.