It’s plastic-free July, and awareness of plastic pollution its impact continues to grow.

Recent research from Wrap Cymru estimates that 400,000 tonnes of plastic waste is generated in Wales each year, of which around 67% is packaging waste. Although Wales has the second highest recycling rate in the world, only 33% of household plastic is recycled.

The Marine Conservation Society’s (MCS) Great British Beach Clean 2019 report highlights that plastic is still the most commonly found litter on UK beaches. The report notes that, in Wales, an average of 29 drinks containers are found on every 100m of beach.

This blog post builds on last year’s plastic-free July blog, and looks at what more is being done to curb plastic pollution in Wales. It will also look at what impact the Coronavirus pandemic has had on efforts to reduce plastic pollution.

In 2019, the Senedd’s Climate Change, Environment and Rural Affairs (CCERA) Committee undertook an inquiry into reducing plastic waste. The inquiry focused mainly on microplastics, but the broader issue of plastic pollution was given considerable attention.

The Committee recommended the Welsh Government bring forward ‘ambitious and transformative policies’ to reduce plastic waste. All of the recommendations were accepted in August 2019, including that:

The Welsh Government should prepare and publish a 10 year, comprehensive and ambitious strategy aimed at reducing plastic pollution.

In response to the Committee, the Welsh Government said that ‘the issues associated with plastic pollution also apply to other materials’:

A strategic approach therefore needs to not only address this issue for plastic, but also for other materials, recognising that the single-use nature of our consumption is a core part of the problem.

In January 2020 the Welsh Government set out proposals to ‘move towards zero waste by 2050’ in a new circular economy strategy ‘Beyond Recycling’. The responses to the consultation are currently being reviewed.

In further recognition of the significant environmental issues arising from the excess use and inappropriate disposal of single-use plastic items, such as take away food containers and plastic cutlery, the Welsh Government announced its intention to ban single use plastics.

The Deputy Minister for Housing and Local Government, Hannah Blythyn MS, said that the proposals are ‘part of a wider, integrated approach to address the problems created by excess plastic and litter in communities’, and confirmed that a consultation would take place ‘in the coming months’, with ‘restrictions due to come into force in the first half of 2021’. 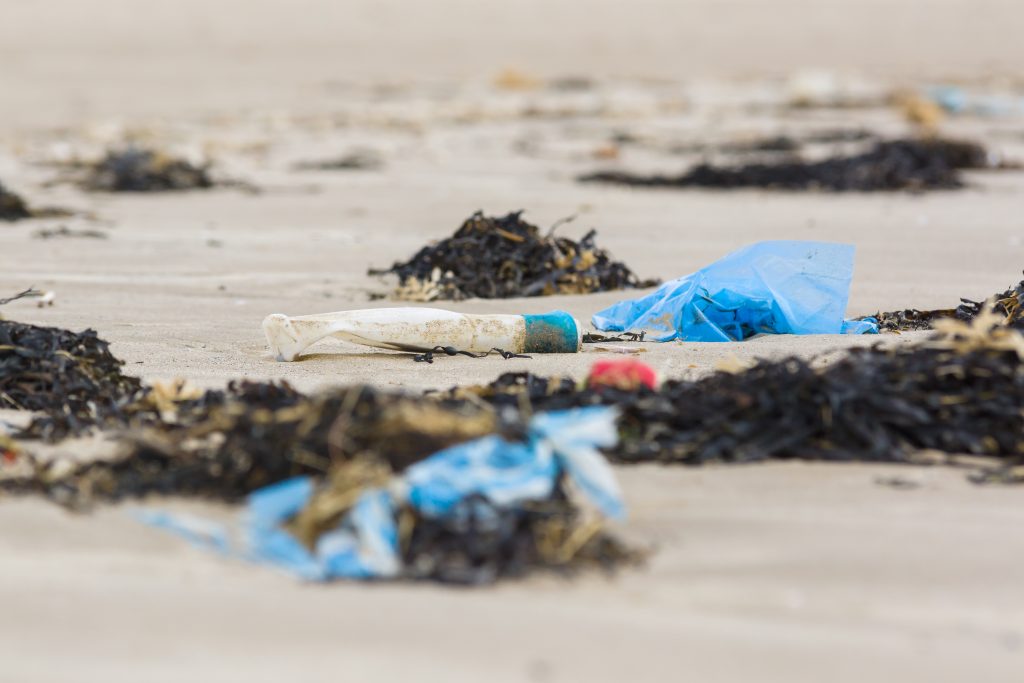 The UK Government introduced the Environment Bill 2020-21, which includes a number of provisions for Wales.

The Welsh Government’s Legislative Consent Memorandum (LCM) for the Bill, explains what these provisions mean for Wales, and why they should be included in this piece of UK legislation. It says that there is ‘no time within the [Senedd’s] timetable to bring forward an Environment Bill that could be used to take forward these provisions’, and that:

…it is appropriate to use the UK Environment Bill as a vehicle to take forward initiatives likely to be required to progress the circular economy strategy, particularly where these require a joined up approach with other UK administrations

Joint proposals for EPR and DRS were previously consulted on  by the UK Government Department for Environment, Food and Rural Affairs (DEFRA) in February 2019. The summary of responses for both EPR and DRS stated that further consultation would take place in 2020, and both schemes are planned to take effect in 2023.

The Bill also allows regulations to be made for charging for single use plastic items, but it does not say what level the charge could be set at.

The Senedd’s CCERA Committee recommended that the Senedd gives consent to the Bill ‘subject to it being satisfied by the Minister’s response to each of the recommendations’ in its report.

During the coronavirus pandemic, there have been positive stories of air quality improving and the hope of biodiversity recovery

Many non-essential local government services were suspended, and temporary changes were made to household waste collections to prioritise services in response to the pandemic. Coupled with limited access to household waste recycling centres, this led to reports of increases in fly-tipping of household and industrial waste.

Keep Wales Tidy reported that the suspension of bin emptying and litter picking activity during lockdown has led to an increase in litter, particularly as people spent time in their local parks. As lockdown measures ease and people are able to spend more time outdoors there are reports that littering has increased, and even more so following the reopening of some takeaway outlets.

The use of Personal Protective Equipment (PPE) is on the rise, much of which is single use and involves plastic. Whilst an absolutely necessary use of single use plastic, Keep Wales Tidy has reported an increase in the littering of PPE such as face masks and disposable gloves. Jemma Bere, policy and research manager for Keep Wales Tidy said that littered PPE is:

… not only an environmental hazard, because they quite often contain plastic which is really damaging to our wildlife and our water systems, but they also pose a particular contamination risk.

MCS said that the impact on the marine environment from increased plastic pollution is currently unclear, as the pandemic has made it challenging for some organisations to undertake data collection. Although beach cleans and litter picks are beginning to resume, the longer term impact on data sets remains.