The Welsh Government published its Final Budget for 2021-22 on 2 March, accompanied by information on the Welsh taxes for next year.

The Final Budget makes an additional £869.5m available for Welsh Government departments in 2021-22. That’s 4% more than what was outlined at the Draft Budget (December 2020).

The extra funding is financed through resources held unallocated at the Draft Budget and by additional funding announced after the Draft Budget was published, as part of the UK Government’s Supplementary Estimates 2020-21 process in February. Additional flexibility was agreed with the UK Government around £650m of that funding, which has enabled the Welsh Government to carry forward more funding from 2020-21 into 2021-22 than the fiscal rules – agreed with the UK Treasury - would normally allow.

The prospect of significant additional funding allocations at the Final Budget led the Finance Committee to conclude it had been a “very draft budget compared to normal”. Wales Fiscal Analysis backed this up, estimating that this years’ Draft Budget had around five times the amount of reserves compared to the average held at this point across the parliamentary term.

The diagram below shows the budget allocated to each portfolio broken down by revenue and capital. 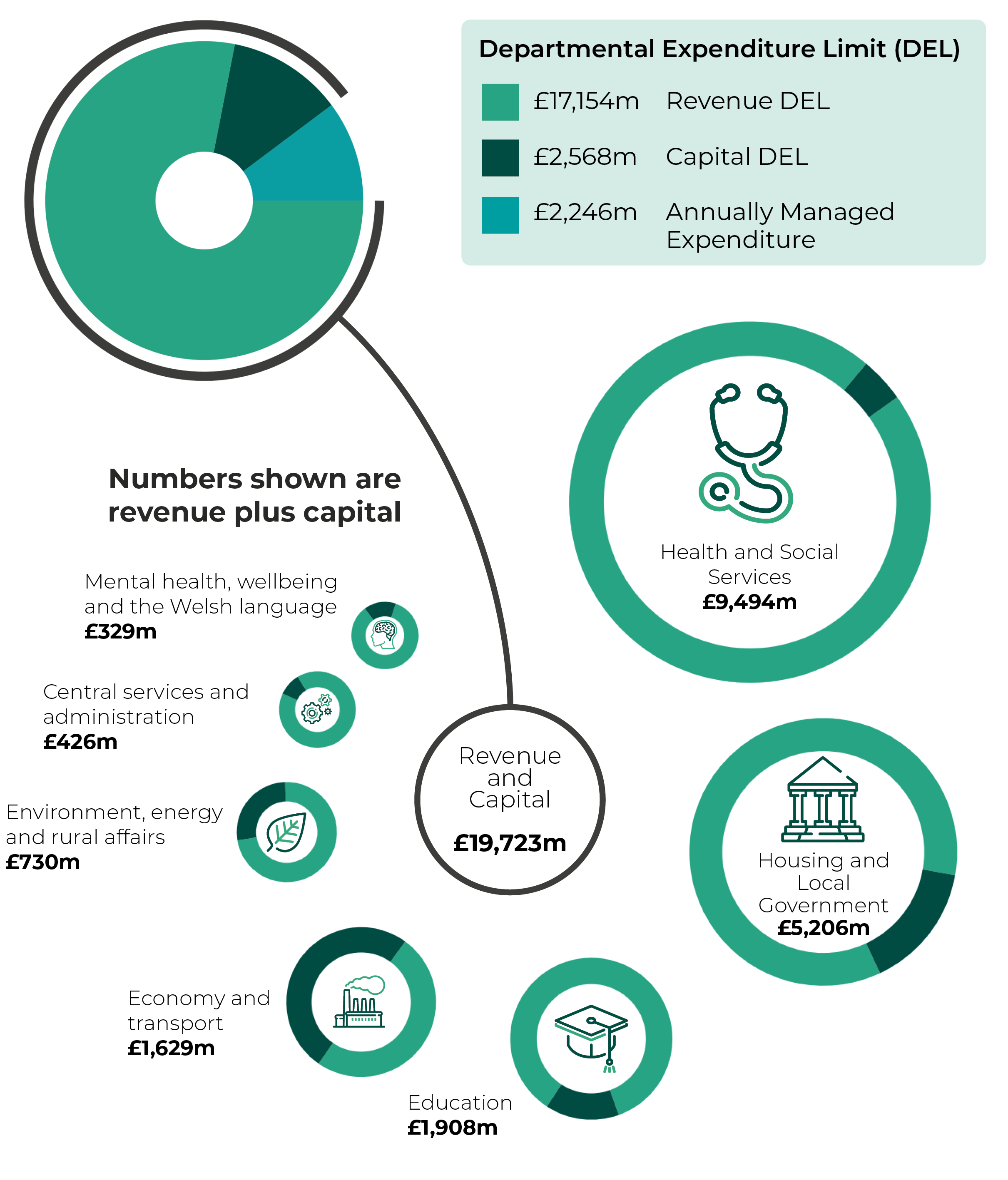 Some of the main additional allocations are outlined below.

The Draft Budget provided an initial package of £77m for COVID-19. The Final Budget allocates an additional £682.2m specifically related to the response, including:

The Final budget includes a £7.1m allocation to the EU transition fund as well as £4.1m for new obligations placed on the Welsh Government in relation to functions and responsibilities repatriated back to Wales from Brussels.

A number of other small revenue allocations have been made that respond to matters arising since publication of the Draft Budget, including; £2.6m to support the development of post-EU farm support; £4.3m for the National Library of Wales and the National Museum of Wales and; £3m to drive forward regulatory changes in outlined in the ‘Building Safety Regime for Wales’ white paper.

Building on the £320m reconstruction package outlined in the Third Supplementary Budget 2020-21, the Final Budget details a £224.5m capital stimulus package, not mentioned in the Draft Budget.

The package includes a number of capital schemes, such as £100m for Social Housing Programmes, £30m for the 21st Century Schools Programme and £20m for Active Travel.

Introduced in 2019-20, WRIT means the Welsh Government has the ability to vary the three income tax rates for Welsh Tax Payers by 10p in the pound – all other aspects remain the responsibility of the UK Government.

The Final Budget maintains the Welsh Government’s commitment that it will not increase WRIT this Senedd term. WRIT will therefore not diverge from what the UK Government has set for 2021-22.

However, as noted by the Minister for Housing and Local Government in her letter to local authorities at the Provisional Settlement, funding for the pandemic was being considered separately to the core funding allocated through the settlement.

It’s generally been the case throughout the pandemic that local authorities have been able to claim for loss of income and for additional costs through the ‘Local Government Hardship Fund’. As noted above, the Final Budget allocates an additional £206.6m to that fund.

No change for Police

Total funding for the four Welsh police forces is due to be £408.2m in 2021-22, an increase of 6.3% compared to 2020-21. Within that the Welsh Government’s contribution is £143.4m. It’s worth noting that the UK Government has a mechanism in place that means all police forces across England and Wales will receive the same increase next year.

The UK Budget included a number of UK wide coronavirus support announcements that will effect Wales, including:

In terms of income tax, the personal allowance threshold was frozen until 2026, as was the higher rate income tax threshold. Corporation tax is due to increase for certain businesses from 19% to 25% in 2023. VAT is also due to be maintained at the 5% rate for hospitality, accommodation and attractions across the UK until September, following which a 6-month interim 12.5% rate will apply.

The UK budget also extended the temporary cut to Stamp Duty Land Tax in England (and Northern Ireland) until September. Subsequently, the Welsh Government announced an extension (to June 2021) of its Land Transaction Tax relief, originally introduced in July 2020.

There were also a number of announcements that will effect England only and therefore result in consequential funding for Wales. For example, business rates relief for retail, hospitality and leisure businesses. The Welsh Government has since confirmed its intention to extend the Retail, Leisure and Hospitality rate relief scheme in Wales for a further 12 months.

The Welsh Government will receive, through the Barnett formula, an additional £735m in revenue funding in 2021-22 due to policies announced at the UK budget.

The Final Budget will be debated in Plenary on 9 March, alongside debates on:

The Third Supplementary Budget (referring to the financial year 2020-21) is also due to be debated alongside these items. You can watch the debates live on SeneddTV.

You can find out more about the Draft Budget, published in December, in our research article.