Election 2021: How diverse is the Sixth Senedd?

The Fifth Senedd’s Committee on Senedd Electoral Reform said that “scrutiny, representation and decision-making are better when undertaken from a variety of different perspectives, and when a range of lived experiences can be brought directly to bear”. It found the need to take a broad view of differences people experience in order to move towards creating a parliament that is “diverse, inclusive and representative”..

The Committee also stated that, while the Senedd has “performed relatively strongly” in terms of gender-balanced representation, “there has consistently been a lack of visible diversity in terms of ethnicity and disability”.

Now the election results are in, what does the data tell us about the diversity of who is representing us in the Sixth Senedd? How does this compare to the past, and to other UK parliaments? And what don’t we have reliable data about?

43% of Members elected to the Sixth Senedd are women – a slight increase compared to the 2016 election, but lower than in the early days of devolution

There are now 26 women Members of the Senedd (43% of all Members), and 34 men. Natasha Asghar MS is the first woman of colour ever to be elected to the Senedd. Her late father Mohammad Asghar was the first Member from an ethnic minority to be elected back in 2007.

The 26 women elected to this 2021 Senedd is slightly higher than the 25 women elected in 2016 . However, it is lower than at the end of the Fifth Senedd – where membership changes led to 29 women and 31 men being Members of the Senedd prior to the 2021 election.

Since the start of devolution, the percentage of women elected to the Senedd has always been well above the global average of one in four parliamentarians. Almost 20 years ago in 2003, the then National Assembly for Wales made headlines as the first legislature in the world to elect an equal number of women and men into its 60 seats. Between 2006 and 2007 there were more women Assembly Members (now known as Members of the Senedd) than men following the Blaenau Gwent by-election in 2006. Since then, the percentage of Members elected who are women has fallen, although it has always remained above 40%. There is significant variation in gender representation across different political parties in 2021 – with women comprising 57% of Labour MSs, 38% of Plaid Cymru MSs and 19% of Conservative MSs. The only Liberal Democrat MS is a woman. 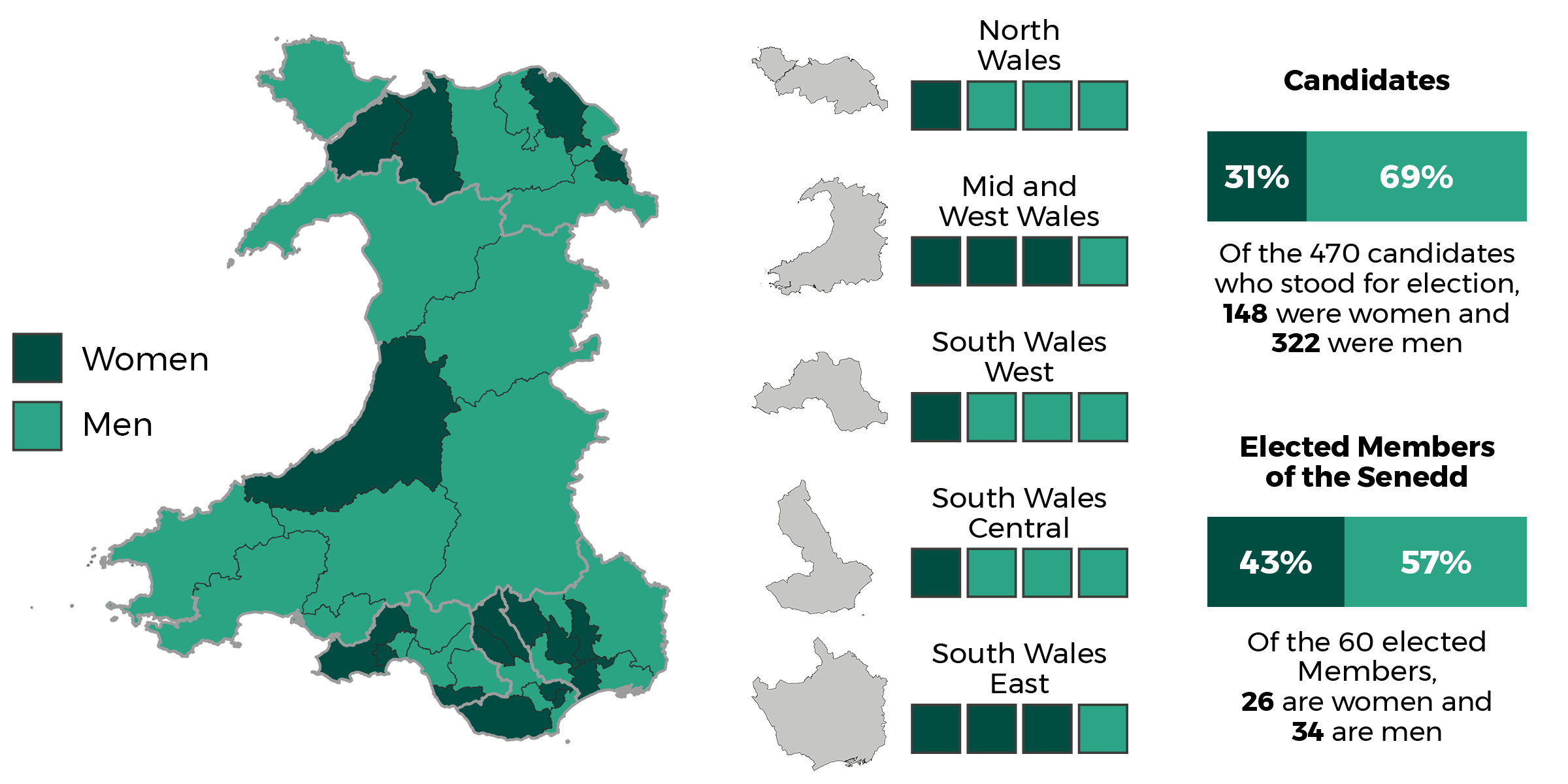 After the 2021 elections, the Senedd had a lower percentage of women Members than the Scottish Parliament for the first time since the start of devolution. A record 58 women – 45% of all MSPs - were elected to the Scottish Parliament, including the first two women of colour. However, the Senedd has a higher percentage of women elected than the Northern Ireland Assembly (36%) and the House of Commons (34%). In the UK Parliament, female MPs represent 35% of Welsh constituencies.

There is limited information publicly collected about the diversity and backgrounds of Members of the Senedd, which makes it difficult to work out how diverse the Senedd really is. For example, there is no information collected or published on the number of MSs with a disability. The Fifth Senedd’s Committee on Senedd Electoral Reform recommended that publication of anonymised data on candidate diversity should be legally required, but that making this a legal requirement would need to be done by the UK Government as it is not within the Senedd’s powers.

The 2016 election saw three Members who choose to publicly identify as LGBT+ elected to the Senedd, and all three of these Members were re-elected at the 2021 elections. Data published by the online newspaper PinkNews suggests that there were 46 openly LGBT+ MPs elected at the 2019 UK election, 7.1% of all MPs.

There are a couple of things we won’t know everything about straight after the election, but which we’ll find out more about over time, including the age and social background of new Members. In total, there are 20 Members elected in 2021 who did not serve during the Fifth Senedd, 19 Members who have not previously been elected, and 1 Member (Altaf Hussain) who was a Member between 2015 and 2016.

Earlier this year, BBC Wales reported that the average age of a Member of the Senedd was 55, compared to the median age of 42.5 across the Welsh population.

A report from academics at the Wales Governance Centre and London Metropolitan University found that in 2016 “slightly more than a third of the Assembly Members elected were new to the Assembly, yet, in terms of professional backgrounds, around eight had already worked in politics in some capacity” . It also said that other new Members had come from ‘traditional pathways’ into politics such as local government, trade unions and the voluntary sector; or from ‘politics facilitating professions’ such as law, journalism and education. Early indications are that this is the case for some of the new intake of Members.

We already know this new Senedd has 26 women, 3 Members from ethnic minorities and 3 Members that choose to publicly identify as LGBT+. Over time we will find out more about its Members and the diverse experiences that they bring to their role.

Look out for our final article on the 2021 elections tomorrow, which looks at voter turnout.