Donaldson Review: An end to Key Stages and a change to the way we structure pupils' progression?

The third article this week on Professor Graham Donaldson’s report,  Successful Futures, explores what the Review proposes for pupils’ progression through the school curriculum.

Having an accepted means of measuring progression is important for both pupils and government alike. Schools, parents and pupils need reference points for individual outcomes to know how pupils are doing in their learning whilst the Welsh Government needs to be able to evaluate how the system as a whole is performing.

A continuum of learning

The Review recommends a fundamental change in the way we think about the journey children and young people take through their life in school. Professor Donaldson has set out a new model for organising the curriculum timeline, in line with the direction given by the Minister for Education and Skills for a continuum of learning. (This term is likely to be one that is highly used during the next few years and arguably emerges as the most prominent concept of the Review.)

Professor Donaldson recommends an end to the current system of key stages, so that there is a ‘learning continuum’ for pupils. He says this will ‘increase potential for higher attainment by minimising transitions and shifts in purposes and approach at intervals’ during a young person’s school life.

Currently, pupils study the curriculum in three key stages (Key Stages 2, 3 and 4) following the Foundation Phase, which itself has been introduced since devolution to combine Early Years and Key Stage 1, establishing a new way of learning in early years. The Review finds that dividing the curriculum into separate stages creates unhelpful transition points and can hinder progression.

The Review advocates a clear line of sight from start to finish of the curriculum journey rather than seeing it as a series of blocks or stages.

According to the Review, learning should be viewed like an ‘expedition’ with ‘stops, detours and spurts’ along the way. Rather than having ‘levels’ of achievement, Professor Donaldson recommends measuring progress through ‘Progression Steps’. These would be used at five points of the ‘learning continuum’ and would relate to expectations at ages 5, 8, 11, 14 and 16.

The Review anticipates that each child and young person would have their own unique ‘roadmap’. Whereas the current system of levels is based on a best-fit judgement of overall attainment, the vision is that Progression Steps would be viewed as a ‘staging post’ rather than a judgment. Progression Steps would therefore be seen as reference points rather than universal expectations. 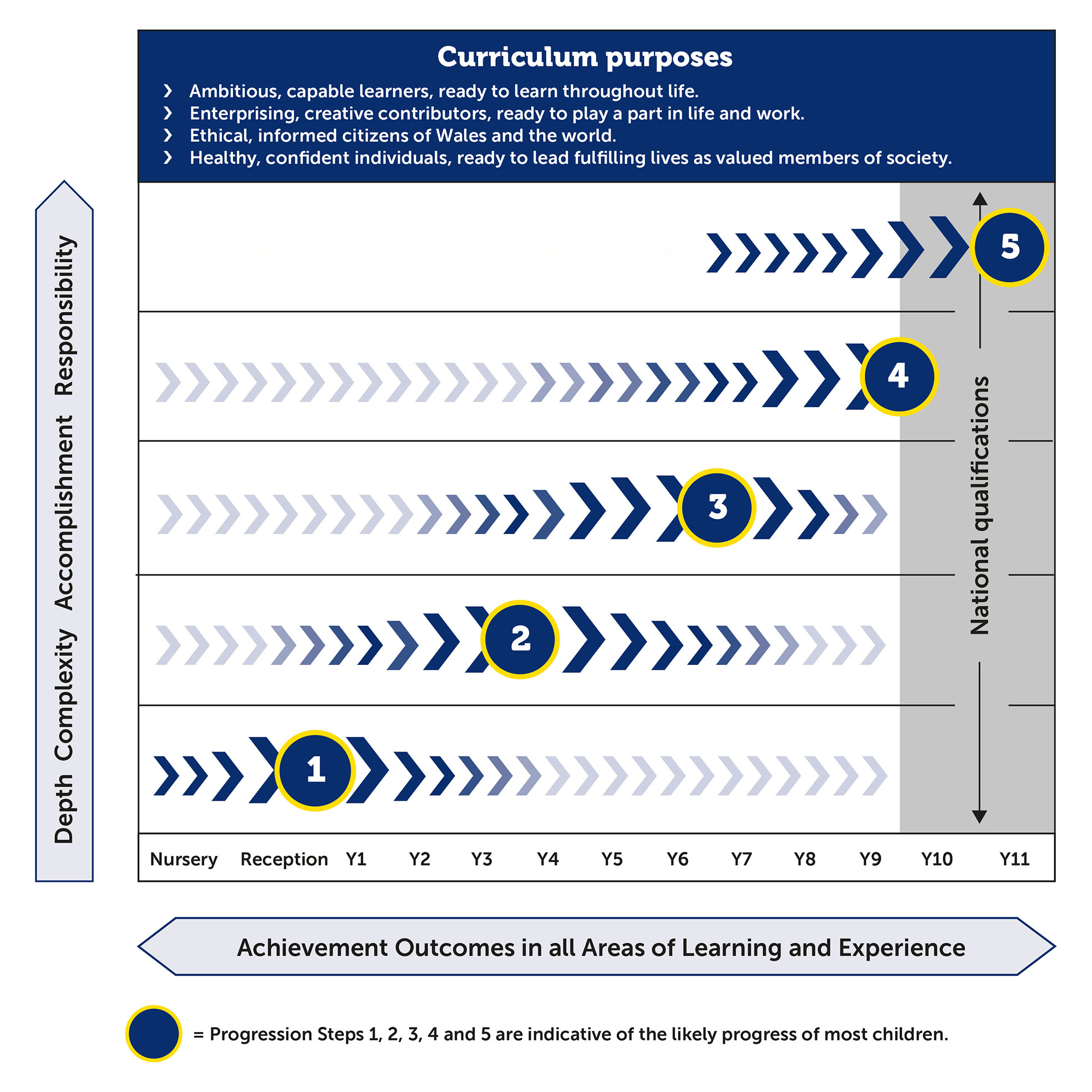 Achievement Outcomes for each of the six Areas of Learning and Experience will be used to determine a pupil’s progress. These Achievement Outcomes will be described from the learner’s own point of view, using phrases such as ‘I have’ for experiences and ‘I can’ for outcomes.

The Review recognises that the learning continuum would need to be flexible and accommodate the different rates at which children and young people progress. Some pupils will reach progression steps faster than others and Progression Step 5 (usually at age 16) would be available earlier for those who comfortably meet Progression Step 4 at age 14. Professor Donaldson also recommends that schools should be under a duty to provide a curriculum that enables most children and young people to reach, or go beyond each Progression Step within the broad three-year window.

‘The Achievement Outcomes at each Progression Step will need to encapsulate the most important aspects of learning, take account of the ways in which children progress in different kinds of learning, and recognise what they need to be able to know and do in order to move securely to the next stage.’

Page 57 of the report gives a flavour of how Achievement Outcomes could be used within each Area of Learning and Experience.

At this point, it is also worth looking at what the Donaldson Review says about the place of the Welsh language in the curriculum (pages 58-60 of the report). Unsurprisingly, Professor Donaldson recommends that Welsh should remain compulsory up until the age of 16 but stresses it needs to be more of a ‘transactional’ language. In total, he makes ten recommendations about Welsh in the curriculum.

Professor Donaldson says young people need to be encouraged to use Welsh in everyday conversation rather than just in a learning environment. This echoes what Professor Sioned Davies said in her Review of Welsh second language at Key Stages 3 and 4 that ‘the future of Welsh and Welsh culture is wholly dependent on transmitting the language to our young people’.

The Donaldson Review reports that there are issues around the quality of Welsh second language provision where attainment is lower than for any other subject.

Tomorrow, the fourth article of this series will examine the changes the Donaldson Review proposes for assessment.