The Welsh Government published its updated COVID-19 vaccination strategy in February 2022. The approach for the strategy has been evolving, with the arrival of the new, more transmissible Omicron variant. This stresses that vaccination continues to be at the cornerstone of our response to the pandemic and will be a key part of how we are able to live, long-term, with the virus

Percentage of the total population who have received a first, second and third dose of a vaccine 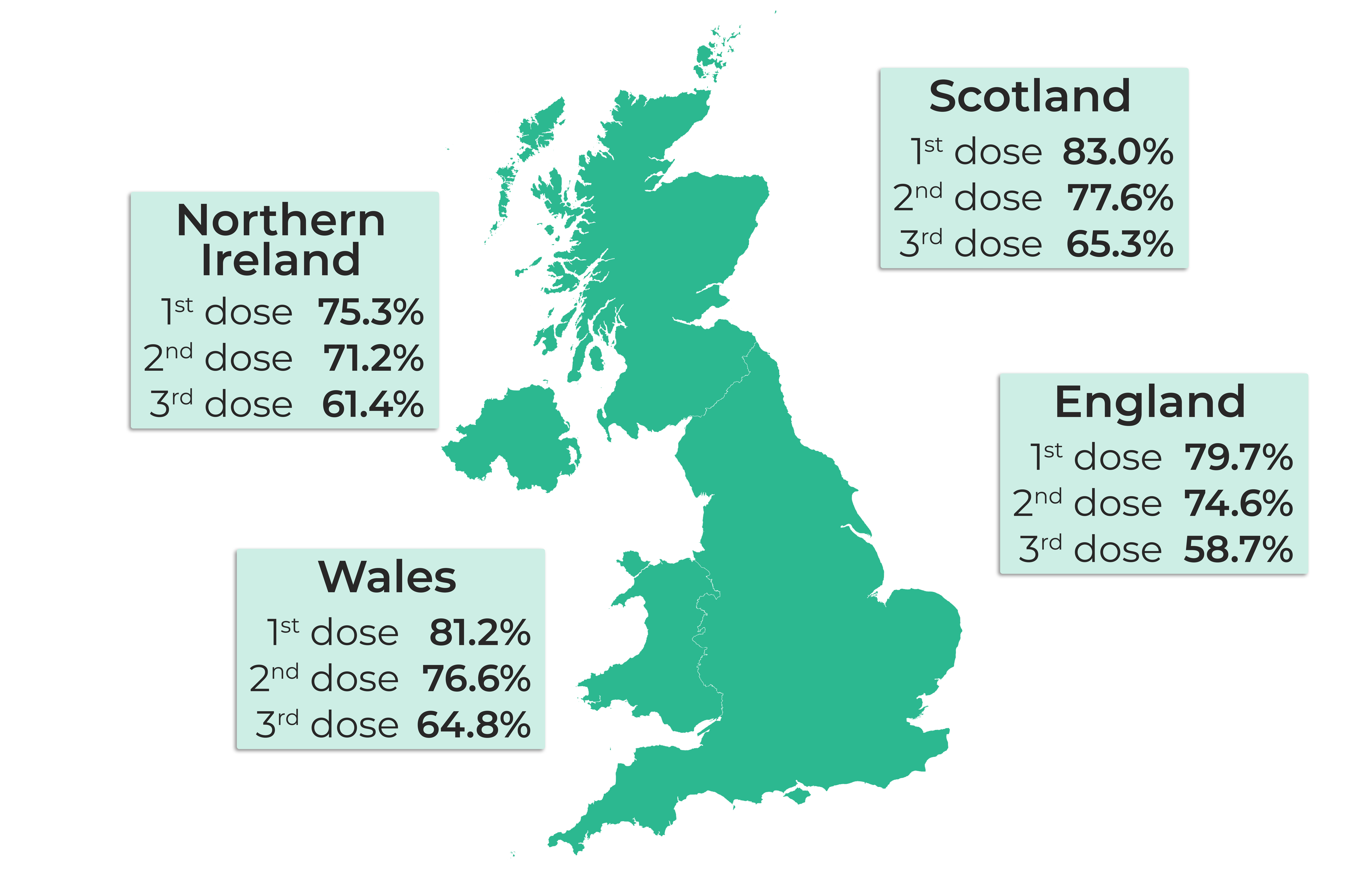 Note: The population of each UK nation is based on most recent Office for National Statistics data.

The map above shows how Wales compares to the other UK nations on the percentage of the total population who have received their first, second and third doses.

The graph below shows the percentage of the population aged 5 and over who have received their first, second and third doses of a vaccine over time.

Percentage of population aged 5+ who have received a vaccination by first, second and booster or third dose up to the end of 29 June 2022 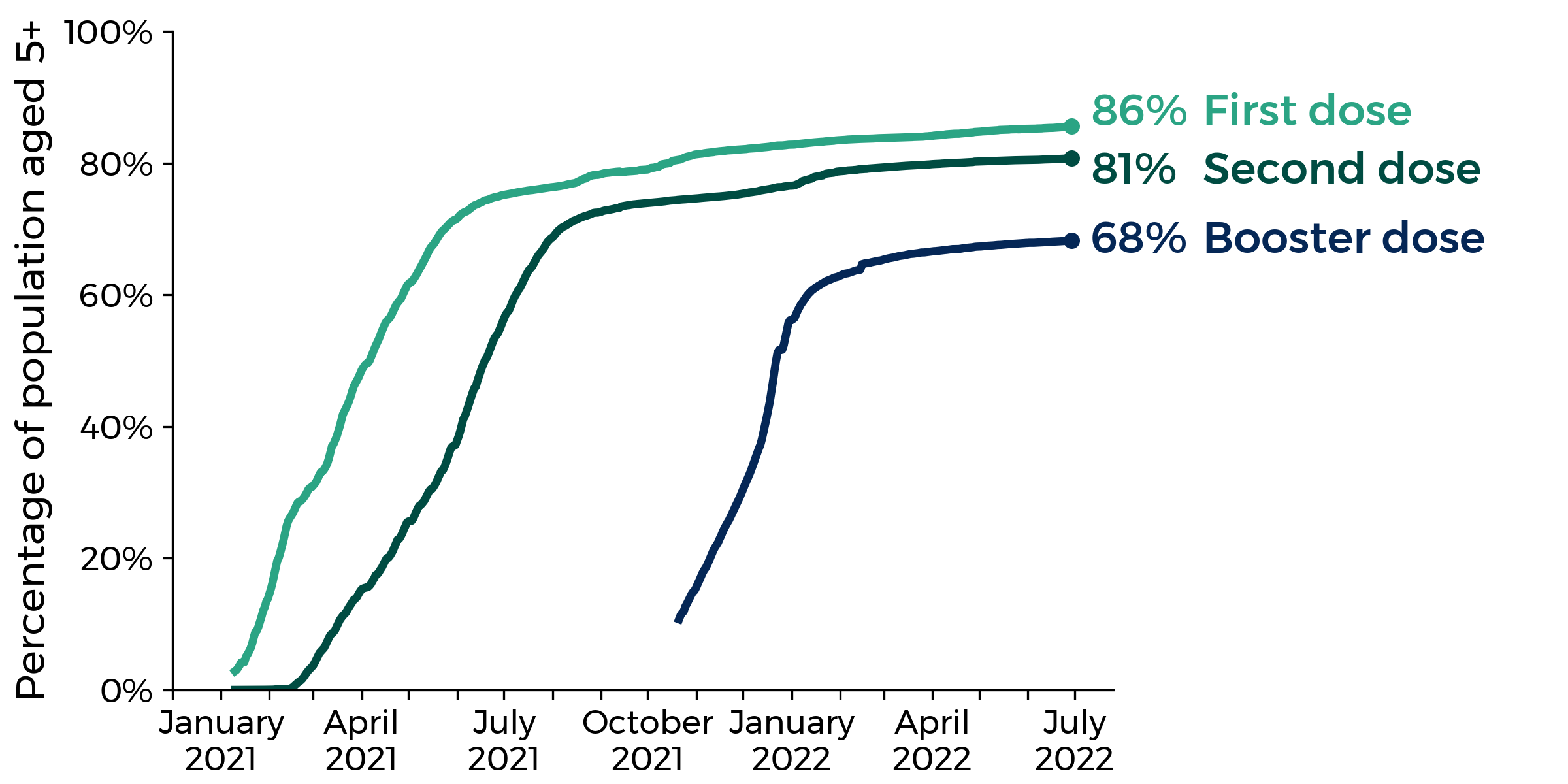 The first vaccination strategy milestone was to have offered a first dose of a vaccine to everyone in priority groups 1 to 4 by mid-February 2021. On 12 February the First Minister for Wales, Mark Drakeford, announced that the first milestone had been met.

The second vaccination milestone was to offer the first dose of a COVID-19 vaccine to priority groups 5 to 9 by the middle of April 2021. The Welsh Government said the second milestone was achieved on 4 April.

The third vaccination milestone represented the second phase of the vaccination programme. The Welsh Government’s aim is to offer a first dose of a vaccine to those aged 18-49 by the end of July 2021 and to reach 75% uptake of first doses in all priority groups.

Our graph below shows the breakdown by priority group and that the 18-29 age group has now reached 80.9% uptake.

The overall progress towards the three milestones are shown in our charts below for first dose uptake, primary course uptake and booster dose uptake. A primary course is two doses with the exception of severely immunosuppressed who are recommended three doses.

Use the arrows below to see data for different doses. The numbers include vaccinations given and recorded up to the end of 06 July 2022.

PHW publishes a weekly update to show the proportion of those in each priority group who have received a first, second and booster dose by local health board and local authority.

The three graphs below show progress by local health board by the three milestones. They show those who have received a booster dose of a vaccine.

Percentage of people who have received a vaccine by priority group and Local Health Board of residence.

Use the arrows below to see different priority groups. The numbers include vaccinations given and recorded up to the end of 06 July 2022.

The interactive map below shows the percentage of adults aged 18 and over who have received both doses of a vaccine. The lighter colours represent the higher percentage of uptake. Hovering over the local authority will show uptake by second and booster doses for those aged 50+, those aged 80+, those in care homes and those aged 16-69 who are clinically extremely vulnerable in that area.

Percentage of adults aged 18 and over who have received both doses of a vaccine by local authority.

The numbers include vaccinations given and recorded up to the end of 30 January 2022.

The most recent data from the Office for National Statistics (ONS) is for the week ending 30 June. The percentage of people testing positive for COVID-19 has continued to increase across the UK, likely caused by increases in infections compatible with Omicron variants BA.4 and BA.5

The latest information from the UK Health Security Agency (UKHSA) suggests that across the UK:

On 8 July, the Minister for Health and Social Services published an update on the COVID-19 picture in Wales, stating that:

We are in the midst of a new wave of infections, caused by the BA.4 and BA.5 subtypes of the omicron variant. These are fast-moving, highly infectious forms of the virus, which are causing a surge in infections across the UK and in many other countries around the world.[…] Public Health Wales reports the current dominant variant in Wales is the BA.5 variant of Omicron.

A large number of NHS staff are currently off work because they have Covid-19.

The Minister also noted that free lateral flow tests for people who have symptoms of coronavirus remained available until the end of July.

Against this background, some hospitals and GP surgeries in England and a number of Welsh hospitals are asking all visitors to wear face coverings. In her 8 July update the Minister said:

We are not making face coverings mandatory in health and care settings, but I would encourage everyone to wear one if they are visiting a healthcare setting and I would also ask people to consider wearing a face covering in crowded indoor public places, while cases of coronavirus are currently high.

The World Health Organisation (WHO) has reported that globally, there’s been an increase in the number of new weekly cases for the fourth consecutive week after a declining trend since the last peak in March 2022, and that:

Updates to the vaccination programme

On 19 May the Joint Committee on Vaccination and Immunisation (JCVI) published its interim advice on an autumn COVID-19 booster programme. The JCVI’s view was that in autumn 2022, a single dose of COVID-19 vaccine should be offered to:

On 10 June the JCVI’s COVID-19 vaccination spring update stated that “the committee will announce its final plans for the autumn programme, including further detail on the definitions of clinical risk groups, in due course”.

Welsh Government have already accepted the JCVI advice of 19 May and on 5 July the Chief Medical Officer confirmed that a Welsh Government announcement was imminent on details of the autumn booster dose.

The available evidence demonstrates that COVID-19 vaccines are crucial tools in the pandemic response and protect against severe disease and death.

But the evidence on vaccine effectiveness is continuing to develop and emerge, and the WHO has been working on an overview of the different observational studies that are being conducted to assess the effectiveness of COVID-19 vaccination. Although the work is still at its development stage, it includes key features in terms of study design, sample size, study population, key outcomes measured and the location of studies.

On 28 June the UK Government published the final terms of reference for the Inquiry which will include the actions taken in Wales and the interrelationship between decisions made across the UK. As part of examining the response of the health and care sector the Inquiry will also consider the development, delivery and impact of therapeutics and vaccines.