Wales has some of the worst air quality in the UK. Why does air quality matter and what might we see during the Sixth Senedd to tackle the pollution problem?

Wales has some of the worst air quality in the UK. Cardiff and Port Talbot have recorded higher particulate matter levels than Birmingham or Manchester and a road in Caerphilly recorded the highest levels of pollution outside of London. Some areas in Wales have breached EU regulations for several years, culminating in the last Welsh Government being taken to court for its lack of action.

Why does air quality matter?

Public Health Wales has described outdoor air pollution as the greatest environmental risk to health. It estimates between 1,000-1,400 deaths per year in Wales can be attributed to exposure to air pollution.

Poor air quality has huge social costs through its impacts on health, and adverse effects on wildlife and biodiversity. But tackling air pollution is not only a health or environmental issue, it’s a matter of social justice. Researchers have described a ‘triple jeopardy effect’ at play – where those from a low socio-economic status are exposed to higher levels of pollution because of where they live or work. A 2016 study found air pollution to be higher in Wales’ most deprived areas. It concluded that air pollution, deprivation and health are inextricably linked.

On a global scale, the World Bank estimates the cost associated with health damage from air pollution to be $5.7 trillion, equivalent to 4.8% of global GDP.

How is air quality managed?

Air pollution limits in Wales are set by a range of UK and European regulations. The European Union Ambient Air Quality Directive sets legally binding limits for certain pollutants in outdoor air. Following the UK’s exit from the EU, these limits have been retained.

Air quality management in Wales mainly takes place at local authority level using a variety of monitoring methods. Local authorities produce annual progress reports and identify any areas where limits are likely to be exceeded. Where this is the case they must implement an Air Quality Management Area (AQMA). There are currently 44 AQMAs across Wales.

Which pollutants are most concerning?

The main air pollutants that affect our health are nitrogen dioxide (NO2), ozone (O3) and other small, particulate matter (PM). PM is the term for a mixture of solid particles and liquid droplets found in the air and is classified by size, with PM2.5 representing smaller size particles than PM10. PM2.5 is considered to be the more dangerous to health. 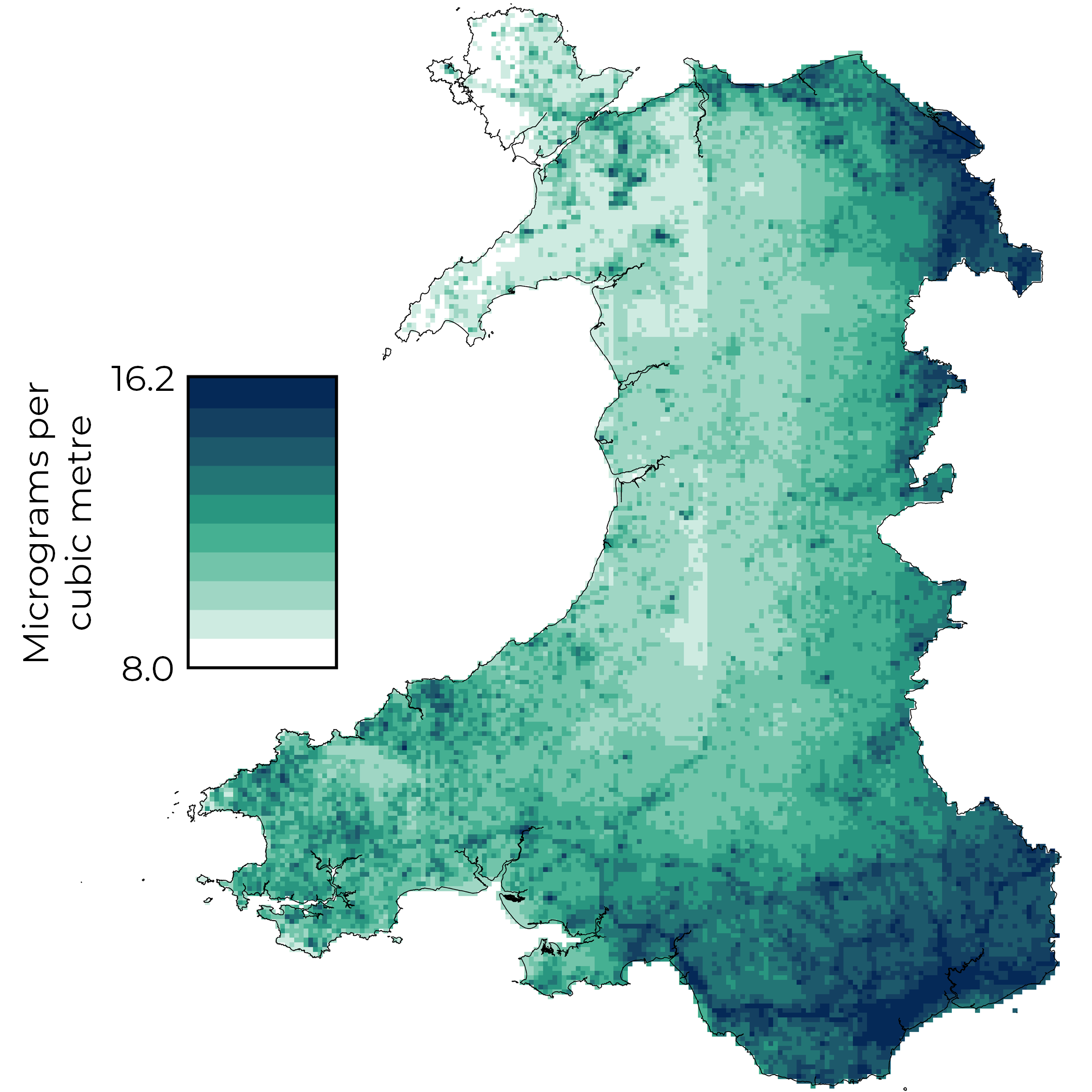 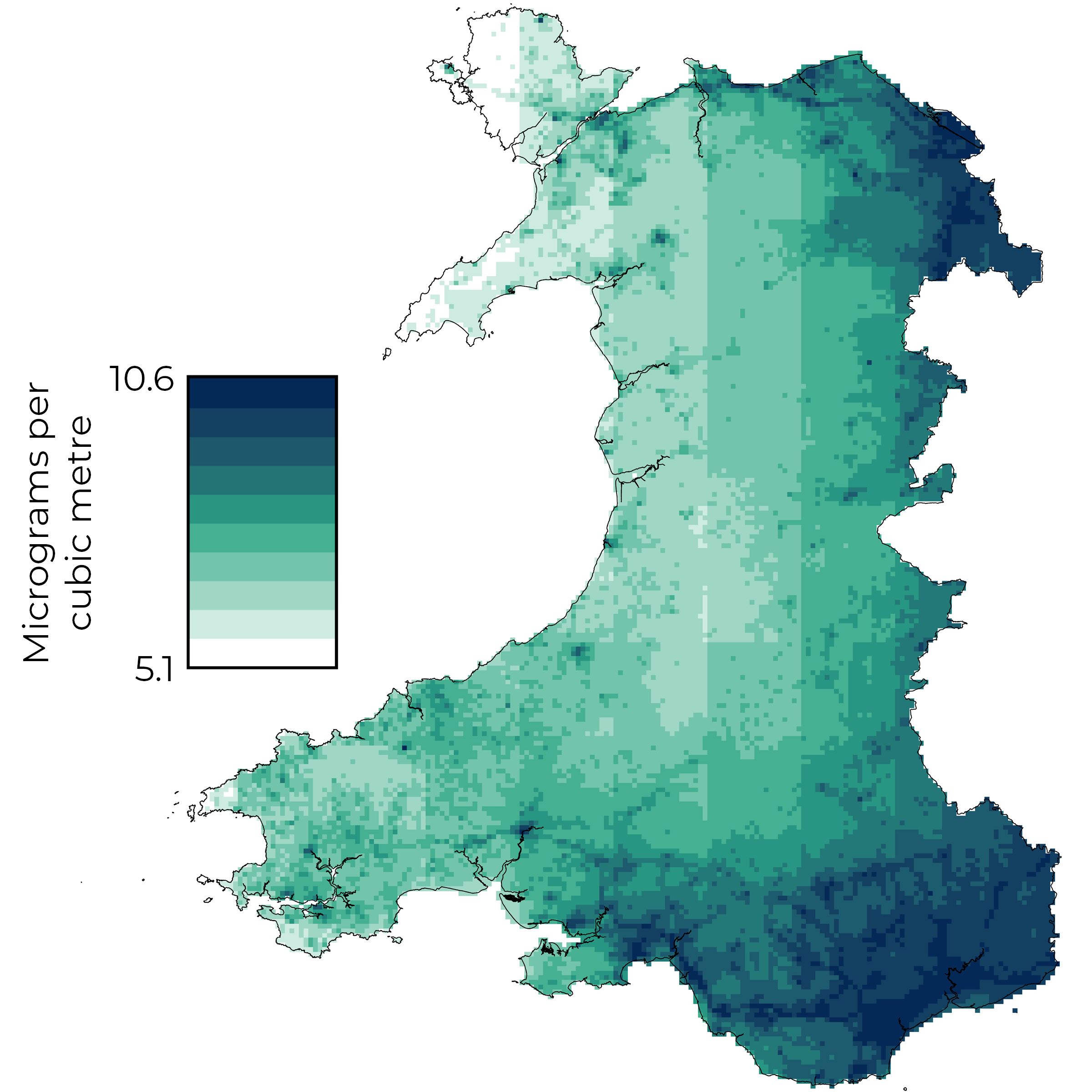 Modelled mean background concentration of NO2 2019 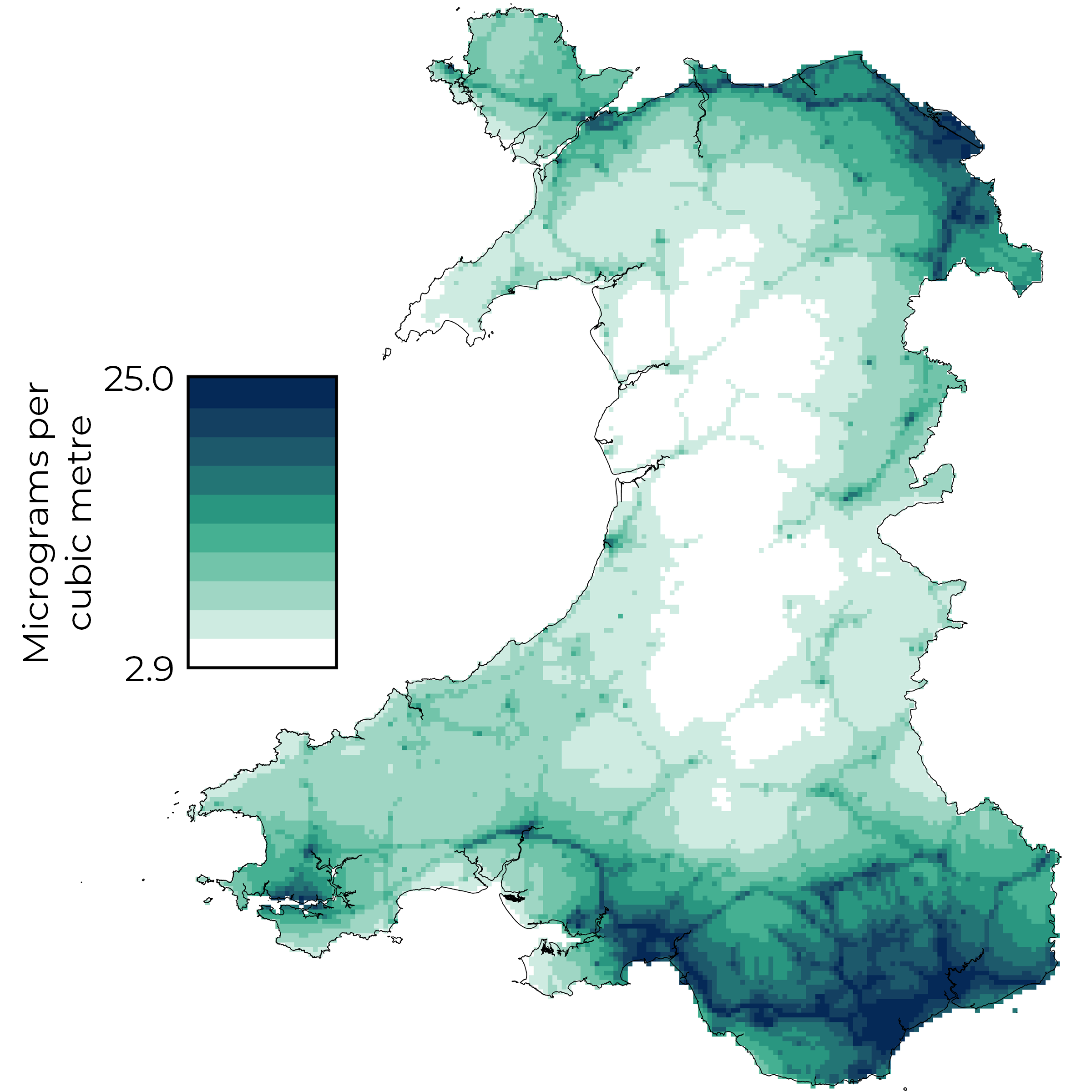 Most breaches of EU limits within the UK are a result of roadside NO2, 80% of which comes from road transport. Of Wales’ 44 AQMAs, all have been declared for NO2, with the exception of Neath Port Talbot which has been declared for PM10. The Port Talbot AQMA covers land and properties between the steel works and the M4 motorway.

To tackle NO2 emissions, 50mph speed limits have been introduced at five sites on the trunk road and motorway network. The latest annual report on roadside NO2 concentrations says that although emissions are falling at all five sites, the situation remains "complicated".

In March 2021 the then Welsh Government launched the new Wales Transport Strategy. It includes a sustainable transport hierarchy which places travel by private motor car at the bottom of the list. It also sets a target for 45% of journeys to be made by public transport, walking or cycling by 2040. It’s currently estimated that 32% of journeys are made this way.

Was the pandemic good for air quality?

On a global scale, lockdowns resulting from the COVID-19 pandemic led to the largest reduction in greenhouse gas emissions ever recorded. Research published in March 2021 found that emissions would need to drop by the equivalent of a global lockdown roughly every two years to meet the goals of the Paris Agreement on Climate Change.

In 2020 the then Welsh Government commissioned a report from its independent Clean Air Advisory Panel to explore the pandemic’s impact on air quality in Wales. It found that NO2 levels decreased by an average of 36% at roadside monitoring sites for the period February to May 2020.

But the report paints a mixed picture. While lockdown saw reduced traffic and decreased NO2 levels, increases in PM levels were recorded. While this can partly be attributed to weather conditions, it’s suggested this may also be due to an increase in waste being burnt, with household waste and recycling centres closed during lockdown.

Responding to the report, Public Health Wales said the analysis shows that achieving significant change in travel behaviour is possible. In September 2020 the last Welsh Government announced its aim for 30% of the Welsh workforce to work remotely.

What could be on the horizon to tackle Wales’ pollution problem?

It identified a range of actions:

The plan also set out an intention to introduce a new Clean Air Act for Wales. In January 2021, the last Welsh Government published a White Paper setting out a number of legislative proposals.

An indicative timetable within the White Paper suggests drafting of the Bill would commence in 2022. Healthy Air Cymru welcomed the plans but says the timetable for enacting the legislation is “far too slow”. It points to the fact that “it could be as late as 2024 before any regulations come into effect”.

The White Paper includes proposals to:

It also makes proposals in relation to smoke control areas where it is an offence to emit smoke from a chimney of a building unless using an approved fuel or appliance. It proposes that these powers are extended to include outdoor burning such as bonfires.

Alongside the White Paper the last Welsh Government launched a consultation on proposals to reduce emissions from domestic burning of solid fuel. It proposes a ban on the sale of wet wood and traditional house coal – fuels which some in rural areas rely upon to heat their homes. Similar measures have already been set out in England.

Whether these plans are a breath of fresh air or the outlook remains hazy is yet to be seen. What is clear is that air quality will be a major challenge for the next Welsh Government to address.