Mental health during pregnancy and in the postnatal period

Perinatal mental health conditions are wide-ranging, and can include:

In February 2017, the Royal College of Obstetricians and Gynaecologists published a report ‘Maternal Mental Health – Women’s Voices’. The UK report describes women's experiences of perinatal mental health problems, based on a survey of over 2,300 women from across the UK who had given birth in the last five years. By surveying women, the College aimed to understand the current provision of perinatal mental health care to identify gaps, to provide better training where necessary and to advocate for change. Just over 3 per cent (59 responses) were from women living in Wales.

In their written evidence to the Children, Young People and Education Committee as part of its Perinatal Mental Health Inquiry, the Royal College of Obstetricians and Gynaecologists summarised their survey findings from the Welsh cohort.

The UK report presents a stark picture of an NHS in which women with poor maternal mental health during pregnancy and after birth experience low rates of onward referral and long waits, with many seeking private treatment as a result.

The following map was produced by the Maternal Mental Health Alliance for their Everyone's Business Campaign in 2015. It shows what the provision of specialist community perinatal mental health services was in the UK in 2015. 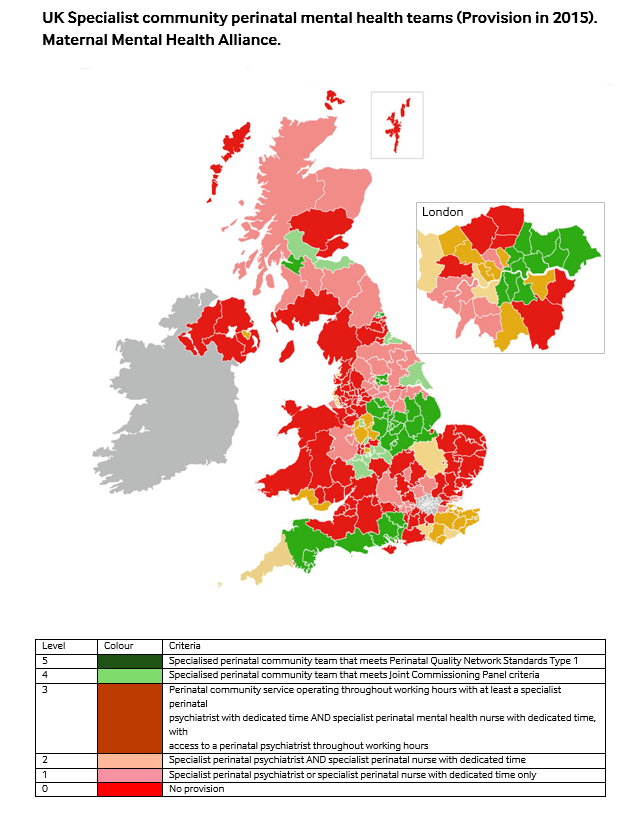 In Wales (as in England), additional funding has been provided to improve specialist care. In 2015, the Welsh Government announced an extra £1.5million in funding to improve outcomes for women with perinatal illnesses.

The Children, Young People and Education Committee’s Inquiry on Perinatal Mental Health (see previous blog article), will provide a uniquely Welsh perspective on the services needed across Wales, and the extent to which women in Wales can access the specialist care they need.

The Committee will be hearing directly from women and their families about their experiences next week (Thursday 18 May). This will be followed by a number of oral evidence sessions from key stakeholders starting on 24 May 2017 (see Children, Young People and Education Committee webpages for more information).