Children and young people returned to schools and colleges across Wales this week, so it’s a good time to take stock of this summer’s A/AS level, GCSE and vocational qualification results.

For the second year running, there were no exams. Whilst results can’t really be compared to previous years, grades are up and are substantially higher than before the pandemic. Attainment gaps appear to have widened, giving credence to concerns that already disadvantaged pupils have been disproportionately affected by the disruption to education from coronavirus.

How were qualifications awarded in 2021?

Continued disruption to pupils’ attendance in school over the past year meant that the unprecedented alternative arrangements for awarding qualifications in 2020 weren’t a one-off.

With many class or year group ‘bubbles’ having to stay at home for periods during the autumn, the then Minister for Education, Kirsty Williams, decided in November 2020 there would again be no exams in summer 2021.

Following the general closure of schools during the winter to all but vulnerable pupils and children of key workers, the Welsh Government announced that centres (schools and colleges) would determine pupils’ grades. The then Minister directed the regulator, Qualifications Wales, to work with stakeholders including the awarding body, WJEC, to operate a Centre Determined Grade (CDG) model.

This was similar to, although not the same as, the Centre Assessment Grade (CAG) system used in 2020. Last year, centres’ judgements were focused on pupils’ potential i.e. what they would have achieved had they sat the examinations. This year centres have used a range of evidence, including non-exam assessments, mock exams and classwork, to judge a pupil’s “demonstrated attainment” and award them an appropriate grade.

How do 2021 results ‘compare’ to previous years?

The Minister for Education and Welsh Language, Jeremy Miles, hailed the “remarkable achievements” of 16 year olds and 18 year olds, pointing to their “tremendous resilience and determination”. Qualifications Wales’ Chief Executive, Philip Blaker, said young people “can be confident” that their qualifications “carry the same value” as those awarded any other year.

As in 2020, grades this year are generally higher than before the pandemic. However, due to the obvious differences (i.e. no exams) they should not be compared as like for like. We refer to 2019 results in this article to illustrate how different the outcomes are. Similarly, 2020 and 2021 results should also not be treated as like for like due to the different approaches taken.

As can be seen in the following infographics, the proportion of candidates awarded the highest grades in A levels, AS levels and GCSEs increased between 2020 and 2021, and particularly against results before the pandemic in 2019.

Grades achieved in the Skills Challenge Certificate (both Advanced and National/Foundation levels) are relatively similar between 2020 and 2021 but have risen during the pandemic since 2019.

The exceptional circumstances of 2020 and 2021 bring an extra complexity to comparing educational performance over time. Changes to performance measures already make it difficult to track the success of the Welsh Government’s school improvement agenda.

What has happened to attainment gaps?

Girls continue to outperform boys in GCSEs – the gap at grades A*-A increased to 10.7 percentage points from 9.5 in 2020 and 7.4 in 2019. Girls again achieved more A*-C grades, although the gap has continued to narrow.

The gap between the proportion of pupils eligible for free school meals (eFSM) achieving the highest GCSE grades and other pupils has grown since last year, after already widening between 2019 and 2020. The proportion achieving A*-C is broadly the same as in pre-pandemic 2019. (Note there has been a change in the size of the cohort as FSM numbers have risen during this period from around 18% to 23%.) 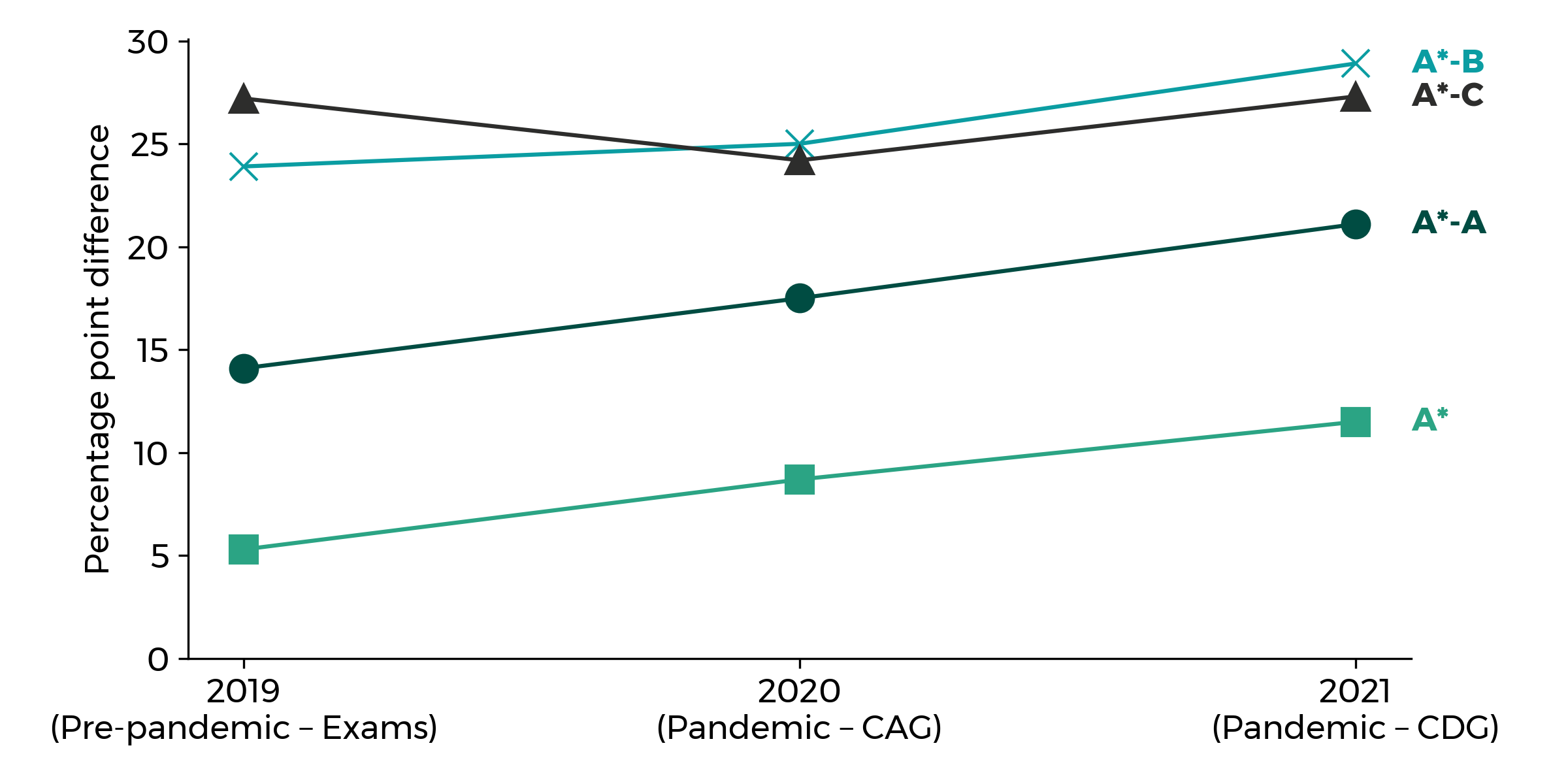 The attainment gap has also widened between pupils with Special Educational Needs (SEN) and their peers for achievement of the highest grades, during the pandemic. For grades A*-C, it has slightly narrowed. 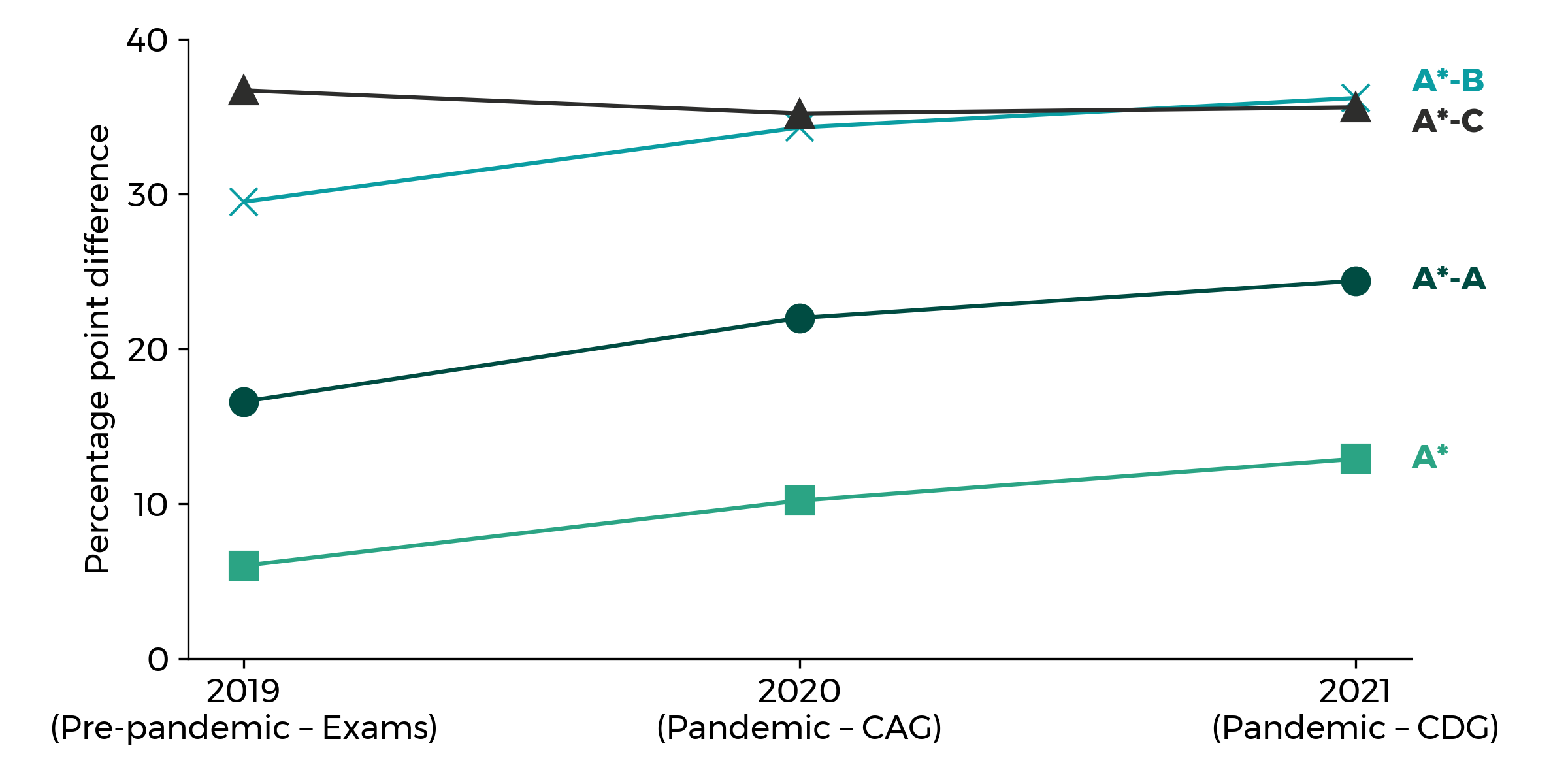 As Qualifications Wales remind us, the last two years have been exceptional and the results need to be considered in the context of the pandemic rather than as part of long-term trends. However, results suggest those already disadvantaged have been affected more by the pandemic in educational terms than their peers. The Fifth Senedd’s Children, Young People and Education (CYPE) Committee heard earlier this year that there is “plenty of evidence” that ”there are striking differences between families in terms of their ability to support young people in their learning: the resources they have around them, the enthusiasm, the engagement, the commitment”.

Assuming there is no further substantial disruption, exams are set to return in 2022, with some changes to account for the disruption so far. WJEC are due to give details of adaptations to A/AS levels and GCSEs soon. But what other factors will have to be considered and what could happen to grade levels long-term?

Legislation requires that Qualifications Wales must act in pursuit of two principal aims:

Balancing these two aims has probably been more difficult than ever during the pandemic. Qualifications Wales had to ensure the 2020 and 2021 cohorts were not unfairly affected by the pandemic, having the opportunity to achieve the grades they would otherwise have under examination conditions; but without undermining confidence in the value of qualifications awarded, particularly any perception they were handed out without due rigour.

Policymakers have arguably leaned towards the first aim of fairness to current cohorts during the pandemic. However, some element of realignment will likely be needed to preserve the long-term integrity of the qualifications system and restore grade currency. The challenge will be to ensure this doesn’t disadvantage previous cohorts by permanently inflating grades, unfairly affect the next cohorts through a drastic return to pre-pandemic grade levels, or risk public confidence in the value of qualifications.