Who’s being left behind in the coronavirus vaccination rollout?

New data reinforces concerns expressed by public health experts that vaccine uptake is lower among some ethnic groups and in deprived areas.

In March Public Health Wales (PHW) published its second monthly report on inequalities in vaccination uptake, which provides a breakdown of vaccinations by priority group, age, sex, ethnicity and deprivation.

Our article on vaccination data outlines who has received a first and second dose of a vaccine by priority group across Wales and by Local Health Boards.

The Scientific Advisory Group for Emergencies (SAGE) ethnicity sub-group raised concerns in December 2020 of “a significant risk” that vaccine uptake for COVID-19 will be lower among some ethnic groups, based on levels of uptake from previous vaccination programmes.

Similar views were expressed by the King’s Fund who warned of a “risk the vaccination programme will further entrench the inequalities that have been so brutally exposed by the pandemic”.

The Welsh Government published an updated vaccine strategy in February which says it has “reached out to and engaged with a wide range of communities, partners and stakeholders” to “[ensure] no one is left behind”.

In February the Health Minister, Vaughan Gething, and Deputy Minister and Chief Whip, Jane Hutt, issued a statement urging everyone to take up the vaccine. It noted that the Welsh Government was working with race and faith groups, and considering using mosques and other places of worship for vaccinations.

However, the data shows that some groups of people have a lower than average vaccine uptake, and PHW highlights the “significant inequalities in coverage of COVID-19 vaccine in Wales”.

The biggest cause for concern is that the same groups with lower levels of uptake of the vaccine are the ones who are at a higher risk of death from COVID-19.

People from some ethnic groups

PHW’s report highlights that the largest inequality is that 75.3% of those aged 65-69 from Black, Asian, Mixed and Other ethnic groups combined received a vaccine, compared to 88.6% in the White ethnic group aged 65-69. 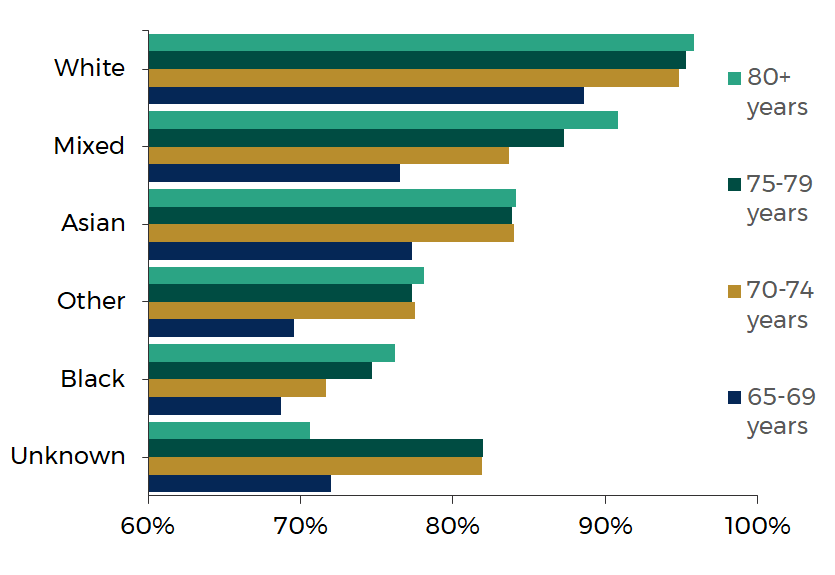 The graph above shows that people from the Black ethnic group have the lowest level of uptake compared to the other reported ethnic groups in all age groups (except those whose ethnic group is unknown).

Death rates involving COVID-19 by ethnic group, aged 9 to 110 years of age in England and Wales 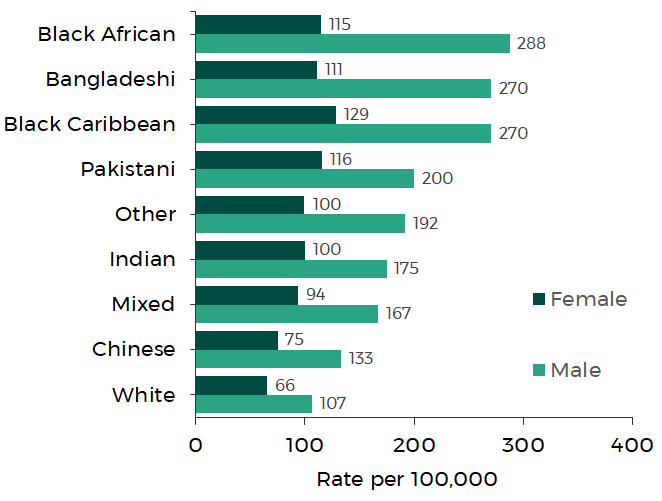 As shown in the graph above, males of Black African, Bangladeshi and Black Caribbean ethnic background had the highest rates of death, significantly higher than all other ethnic groups.

People living in the most deprived areas

The graph below shows uptake by age group and areas of deprivation measured by the Welsh Index of Multiple Deprivation (WIMD). WIMD is an overall measure of deprivation based on a number of factors such as income, employment, health and education. 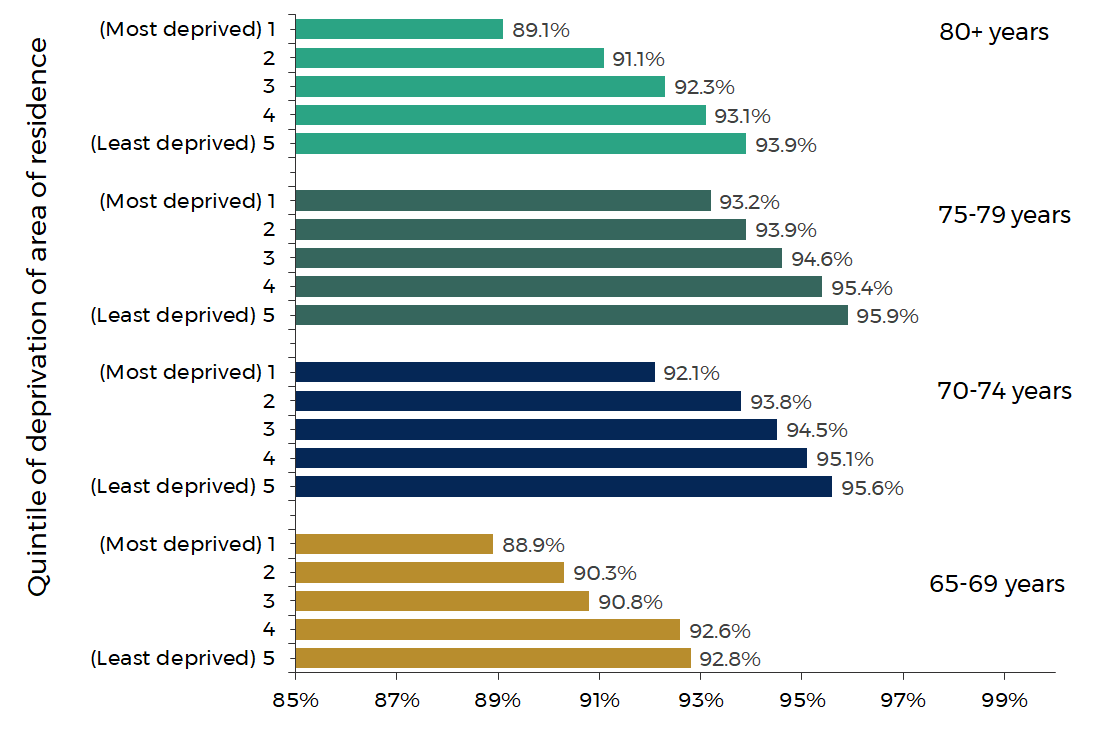 In each age group shown there is a stark difference in the uptake of a vaccine between the most and least deprived areas. The largest difference in uptake is seen in those aged 80 and over at 4.8 percentage points. 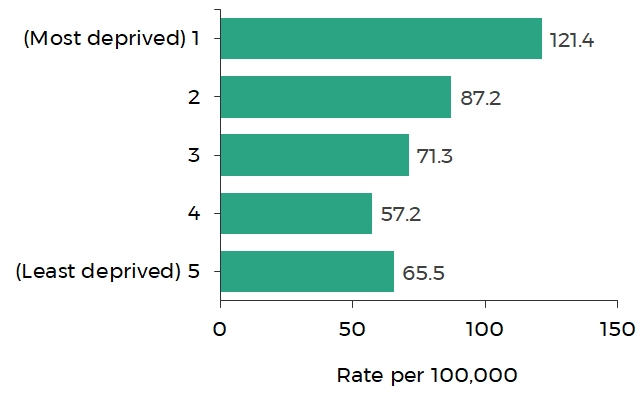 What does this mean?

Wales is starting to ease the restrictions currently in place to control the virus. The modelling to predict the impact of easing restrictions, and thereby increasing mixing between people, suggests a third wave of the pandemic is likely in most scenarios.

A resurgence of the virus is likely because many people do not have protection from COVID-19. Either because they haven’t been vaccinated or because their vaccine won’t prevent all infection or illness (even though they’re highly effective, the vaccines don’t provide perfect protection).

This means that communities where uptake is lower will be particularly at risk from an increase in the spread of COVID-19.

Why are some people reluctant to get vaccinated? 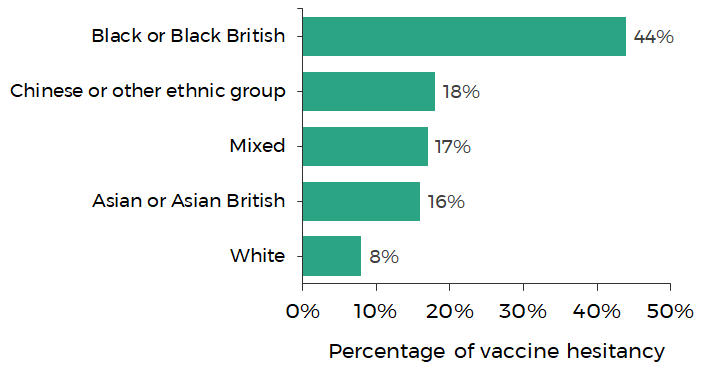 In a survey carried out by PHW in March, reasons given for not wanting to receive a vaccine included:

Results from ONS surveys show similar reasons being raised. The graph below shows the five most common reasons for not wanting to take a vaccine. 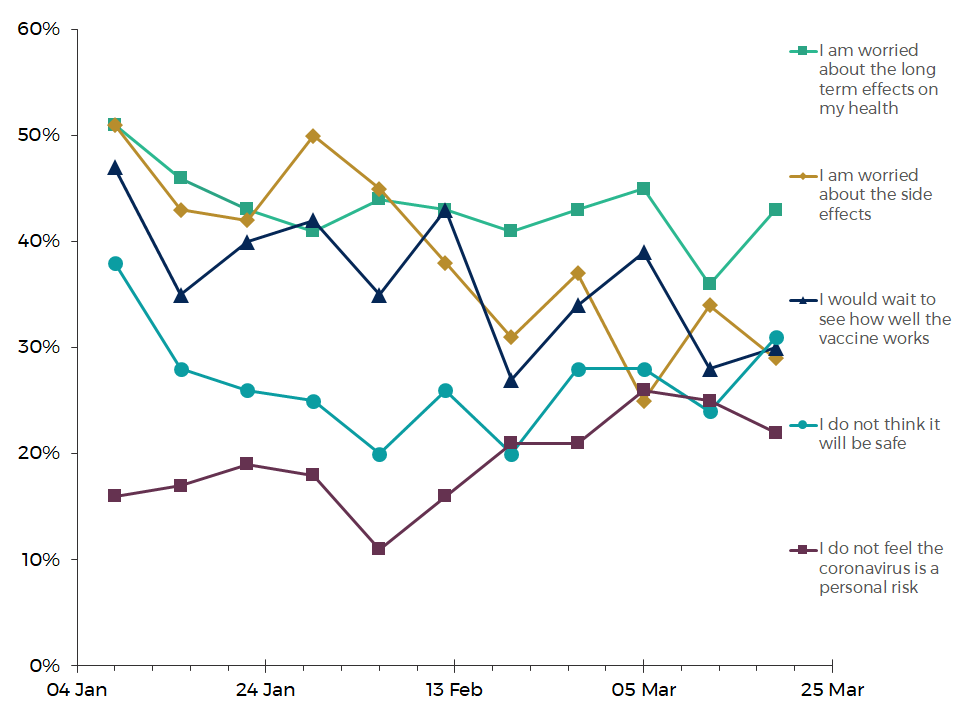 43% of respondents who were fairly or unlikely to have a vaccine if offered said they were worried about the long term effects on their health. This has been the most common reason since mid-February 2021.

Research by SAGE’s ethnicity sub-group suggests that specific reasons for vaccine hesitancy among some ethnic groups include:

What can be done to overcome vaccine hesitancy?

Some suggested solutions from SAGE’s ethnicity sub-group to overcoming these barriers include:

The biggest worry is that the same groups with lower levels of uptake of the vaccine are the ones who are at a higher risk of death from COVID-19. These people will be at an increased risk if there’s a third wave of the virus. This presents a significant challenge in managing the impact of the virus on some of the most vulnerable people in Wales.