Who owns the seabed, and why it matters

The Crown Estate is a collection of marine and land assets and holdings belonging to the reigning monarch. The marine assets, and the increasingly important role they play in tackling the climate crisis, are the focus of this article.

The Crown Estate includes the seabed out to 12 nautical miles, around 65% of the Welsh foreshore and riverbed, and a number of ports and marinas. However, it’s not the private property of the monarch. It cannot be sold by the monarch, nor do revenues from it belong to the sovereign.

The term “Crown Estate” is also used for the body that administers the estate, established by the Crown Estate Act 1961 and headed by a board - the Crown Estate Commissioners. It’s independent of government and the monarch with a public function to:

Why this is important for climate ambitions

The Crown Estate acts as a gatekeeper for any organisation or individual seeking to use or develop the seabed.

… [the Crown Estate] hold the rights to the resources on the continental shelf, such as natural resources and offshore energy, but excluding fossil fuels.

Beyond the 12 nautical mile limit the seabed is ownerless. However various government bodies have rights over resources within the exclusive economic zone (12-200 nautical miles, also known as the ‘offshore’). Responsibility for oil and gas in the Welsh offshore is reserved to the UK Government, but the Crown Estate has responsibility for offshore wind and wave.

As a result it plays a fundamental role in the sustainable development of the marine renewable energy sector, which it describes as its “most significant activity” in Wales.

Leasing the seabed for energy generation

The Crown Estate awards the rights to use the seabed through a leasing process. Existing leases in Wales include:

Part of Wales’s seabed is included in the current Offshore Wind Leasing Round 4 - the first major UK leasing round in a decade, offering the opportunity for 8GW of new offshore wind projects.

There are six proposed projects, currently being assessed for their potential impacts on the environment – a legal requirement known as a ‘Plan-level Habitats Regulation Assessment (HRA)’. The process is expected to conclude in Spring 2022, when successful bidders will enter into an ‘Agreement for Lease’ i.e. be awarded the seabed rights.

Three of the proposed projects are located in the ‘Northern Wales & Irish Sea area’, and were reported to have “attracted the most frenzied bidding”. One of the projects is located off the north Wales coast, north east of Anglesey. The successful bidder was a consortium of EnBW and BP, and the project has a potential capacity of 1,500MW, which would provide enough power to meet the electricity needs of approximately 1.4 million homes. 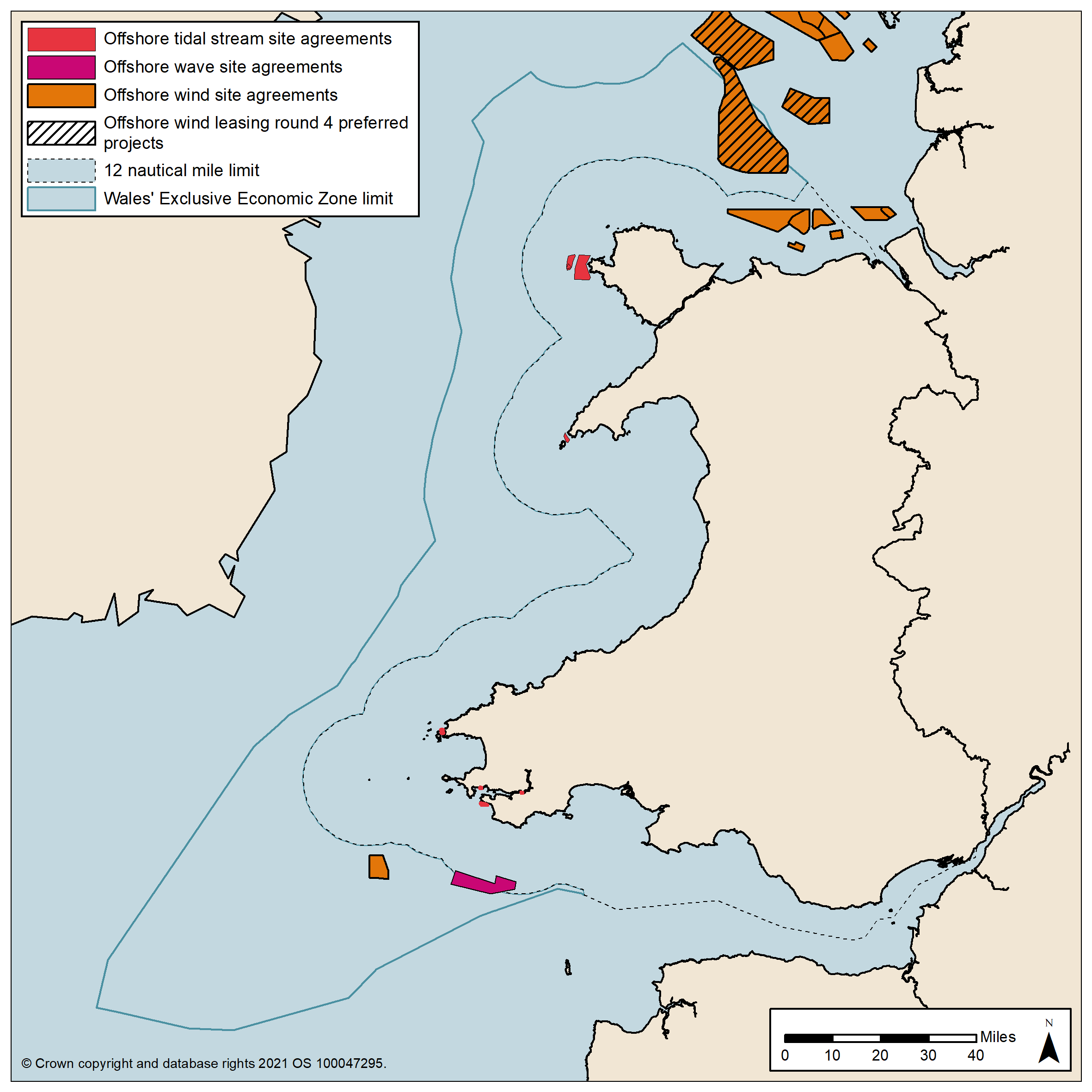 The Crown Estate has published plans for floating wind leasing in the Celtic Sea, with an ambition to unlock up to 4GW of clean energy capacity, and provide clean power for almost four million homes.

Floating offshore wind combines the platforms technology used in the oil and gas industry, and wind turbines. This means wind turbines can move into deeper waters with higher wind speeds and have less visual impact.

Pre-commercial, smaller projects, are being supported to develop new technologies for a range of seabed conditions and locations. As part of this, rights to the seabed have also been awarded for Wales’s first ever floating wind demonstration project, Erebus. Located about 45 km off the Pembrokeshire coastline it aims to provide enough energy for 90,000 homes (96MW).

The Welsh Government has since undertaken an evaluation of current port capability for the floating offshore renewable energy sector, and the Association of British Ports (ABP) has said it’s keen to seize the opportunity to create a floating offshore wind centre of excellence in the Celtic Sea.

How much is Wales worth to the Crown Estate?

The valuation of the Crown Estate’s marine portfolio in Wales has increased significantly from £49.2 million in 2020 to £549.1 million in 2021. This increase is a result of the Offshore Wind Leasing Round 4.

Wales’s total portfolio of assets is currently valued at £603 million.

The Crown Estate in Scotland, where assets and revenues are devolved

Last year Crown Estate Scotland returned £12 million revenue to the Scottish Government for public spending, and built up a £38.6 million fund for investment in the blue economy.

The Welsh Government highlights in ‘Net Zero Wales’ that income from leasing the seabed in Scottish waters, is returned to Scottish Ministers, and that “The Crown Estate is set to benefit financially from Wales hosting offshore and marine renewables. There should be parity with Scotland”. It states that “Wales should benefit from energy projects on land and in Welsh waters”.

On Monday 21 June 2021, Liz Saville Roberts MP presented a Private Members’ Bill - the Crown Estate (Devolution to Wales) Bill - to Parliament, which would “devolve management of the Crown Estate and its assets in Wales to the Welsh Government”.