Who gives evidence to Senedd committees? And whose voices are missing?

Senedd committees are a powerful part of Welsh democracy. They check and challenge the actions of the Welsh Government, scrutinise draft laws, and engage directly with citizens. Their reports, recommendations, and legislative changes can have a real impact on how the Government and other public bodies run public services, how public money is spent, and what laws people are subject to.

How do committees do their work?

Committees rely on evidence from a range of people and organisations to do their work. It helps them to decide which issues to investigate, where problems might be, and what solutions might work.

Committees usually run consultations when they are undertaking inquiries or scrutinising draft laws and budgets. Anyone can respond to these consultations in writing, or other formats like video or audio. Committees also invite certain people and organisations to give oral evidence during committee meetings, in person or remotely.

Evidence gathered through consultations, committee meetings, and citizen engagement activities like field visits, focus groups and surveys, alongside research conducted by Senedd Research or from expert advisers, helps committees to reach conclusions, come up with ideas for change, and write reports.

Why monitor the diversity of committee evidence?

Understanding which people and organisations give evidence to committees can help identify missing voices and barriers to engagement.

‘Diversity’ can mean many different things. The Senedd states that it wants to make sure that the “evidence used by Senedd committees comes from a diverse and inclusive range of people, communities, sectors, groups and organisations - especially those that are affected by an issue under consideration.”

What did the evidence diversity monitoring pilot project find?

From November 2021 until April 2022 Senedd committees ran a pilot project to monitor the diversity of committee evidence. This was done in two ways:

The following graph shows the share of survey responses for each sector and highlights differences with the SBMS data.

Figures are rounded. Values under 5% are not shown for disclosure control. Box sizes are approximate for the groups Welsh Government representatives, private sector and others. 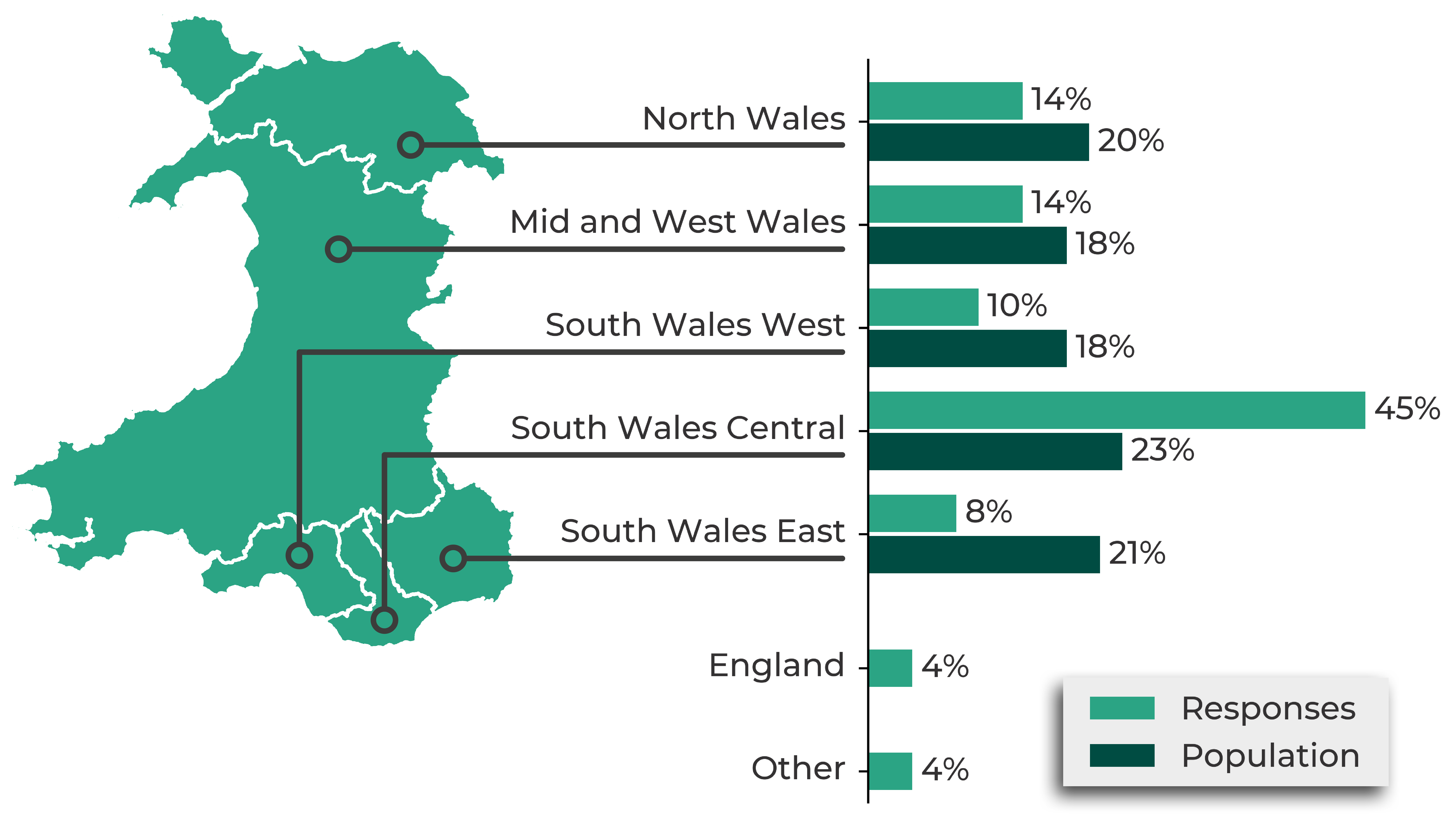 'Other' includes Scotland, outside the UK, and preferred not to say.

Compared with population data, the survey data showed an under-representation of younger people (under 30) and people over 60, which is likely a reflection of the fact that most people were responding in a professional capacity, of working age, and at a more advanced point in their career.

More than 55% of survey respondents identified themselves as female, compared to the Welsh population which is 51% female.

Two of the pilot surveys asked about education, employment and socioeconomic background. 90% of survey respondents were educated to degree level or above, compared with 24% of the Welsh population.

There was also an over-representation of people working full-time compared with the Welsh population (58% compared with 37%). 80% of survey respondents did not consider themselves to come from a disadvantaged background.

Fewer than 15% of survey respondents identified as having a disability, compared with 23% of the Welsh population.

Two of the pilot surveys asked about responsibilities for caring as a result of physical or mental health or old age. 20% of survey respondents said they had caring responsibilities, whereas research indicates that 29% of the Welsh population care for someone.

In terms of sexual orientation, gender identity, national identity, and ethnic group, there did not appear to be any significant under-representation compared with the Welsh population as a whole.

Nearly half of respondents lived in the south Wales central region, so respondents are likely to more closely reflect the demographics of this region.

Unless otherwise stated, the above comparisons are made using the most recently available Census data, either from 2011 (for education, disability, sexual orientation, gender identity, and national identity), or 2021 (for age, sex, working pattern, religion, and ethnic group). Values under 5% are not shown for disclosure control.

The experience of giving evidence

The majority of survey respondents asked about their experience of contributing to committee work were satisfied, including with the notice they were given, the opportunity to give their views, help from staff, and their overall experience. 95% said it was 'likely' or 'very likely' that they would take part in committee work again given the chance.

A second pilot of the evidence diversity monitoring system began in November 2022. Most people engaging with Senedd committees will be invited to complete the survey.

The data will also help committees to understand the impact of changes to their processes since the pandemic, particularly the continuing use of remote evidence.

A range of work is being explored and undertaken internally to make sure that everyone is able to take part in the work of committees, including new guidance and training.

You can read more about the pilot in the FAQs.