Two Welsh Language Commissioners, one Annual Report: Key successes in 2018-19, and the challenges ahead. 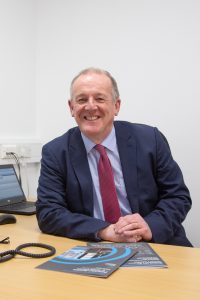 The former Commissioner’s final year in office was overshadowed by uncertainty. Up until February 2019, the Welsh Government was proposing changes to the structure of the organisation, its role and functions. The proposals were set out in the Welsh Government’s White Paper – Striking the right balance: proposals for a Welsh Language Bill. Despite that uncertainty, the new Commissioner notes in his foreword that:

There is no trace of uncertainty in this report; it is testament to Meri and the staff that they have persevered with determination and conviction, maintaining the momentum of their work.

The new Commissioner began a shadow period as ‘Commissioner Designate’ in February 2019, before taking the role formally in April 2019. In his first few months as Commissioner, he notes in his Foreword to the report that he travelled around Wales meeting with organisations and community groups. The aim, according to the Commissioner, was to help his understanding of the relationship that different communities have with the language. He noted this would ‘shape my vision and priorities for the organisation’.

In his recent evidence to the Culture, Welsh Language and Communications Committee (CWLC), the new Commissioner said that a key conclusion he took from his meetings was that:

the standards were starting to have an effect, that they were effective, and that came from organisations themselves saying that they had seen an improvement in terms of the services provided.

While there are clear signs of progress around the provision of Welsh language services, the Commissioner notes his concerns around language use. He suggests that greater ‘energy’ will be required in promoting and marketing the language and its use moving forward.

The Commissioner’s Annual Report notes some significant progress and achievements during 2018-19. These range from sharing innovative practices, making recommendations on dementia care and, the Welsh language in prisons, and launching a list of standardised Welsh place names.

One significant area of progress in 2018-19 relates to standards. At the end of March 2018, 103 organisations were implementing Welsh language duties. This increased to 122 in 2018-19, with all 19 of these bodies in the health sector. Introducing standards in this sector has been slow, with the previous Commissioner in October 2017 noting frustration with the lack of progress:

By now that does create problems at a grass-roots level because social care has been operating within the standards for a year and a half... As I go around and talk to various heads, there is frustration that there are two regimes running separately.

The CWLC Committee recently heard that the health sector, in the past, has performed significantly worse than other sectors in Wales in terms of Welsh language service provision. But the new Commissioner observed some progress in the sector during 2018-19 as the sector prepared for the standards, signalling that the ‘system itself does encourage action’.

What is the financial situation?

In her final scrutiny session with the CWLC Committee (October 2018), Meri Huws explained that the £200,000 overspend in 2017-18 was ‘entirely intentional and strategic’. She stated that:

Having faced a flat budget over a period of three years…we made a decision as a management team, and this was supported by our risk and audit committee, to use some of those reserves.

The Committee was concerned by the latest overspend, particularly its impact on the Commissioner’s reserves. The overall level of reserves, as of March 2019 was £438,000, down from £501,000 the previous year.

Despite a relatively healthy overall reserve, the new Commissioner notes in his report the need to look at the underlying level of reserves available. This, he states, is the ‘true amount that is available to the organisation to safeguard against any potential future overspend’. The underlying reserves as of March 2019 are £287,000.

What are the key challenges ahead?

While there are many challenges facing the new Commissioner, financial risk to the organisation is high on the list. The Commissioner noted that the office has faced ‘significant cuts over the years’:

The Commissioner’s Annual Report also notes that recent budget reductions has made it ‘increasingly difficult to support ambitious projects and activities to increase opportunities to use the Welsh language’.

In his evidence to CWLC Committee, the new Commissioner indicated there could be other financial concerns ahead. The Commissioner noted that he has recently agreed with unions to fund a salary increase, and there is a potential funding issue around increased pension contributions:

On our part, contributions for pensions have increased from 21 per cent to 27 per cent. So, there are additional costs that we foresee of about £180,000 at the moment that aren't funded.

According to the Commissioner, a future funding shortfall would ‘impact on how much promotion work we'll be able to do’, and affect the ‘timetable in terms of dealing with complaints’.

On Tuesday 5 November, the Assembly will debate the Welsh Language Commissioner’s Annual Report 2018-19, you can watch the debate on SeneddTV.