This article was previously published on 03 November 2017. It is being reposted ahead of the Plenary debate on the Climate Change, Environment and Rural Affairs Committee report on 10 January 2018.

In December 2016 the Climate, Change, Environment and Rural Affairs Committee launched its inquiry into the effectiveness of Marine Protected Area management in Wales and the potential implications of Brexit. The Assembly will debate the inquiry report ‘Turning the tide? Report of the inquiry into the Welsh Government’s approach to Marine Protected Area management’ in Plenary on 8 November.

Welsh seas make up over half the area of Wales. Marine Protected Areas (MPAs) are conservation sites in the marine and coastal environment. They are designed to protect particular features (species and habitats) by managing human activities that occur within the site. According to the Welsh Government there are 132 MPAs in Wales, equating to 69% of Wales’ seas (see Figure 1 below). These include sites such as Skomer Marine Conservation Zone in Pembrokeshire that has been an MPA in some form for over 25 years. All MPAs in Wales are multi-use, meaning that the majority of activities occur as usual. Only activities which are likely to cause deterioration or disturbance to MPA features require management. 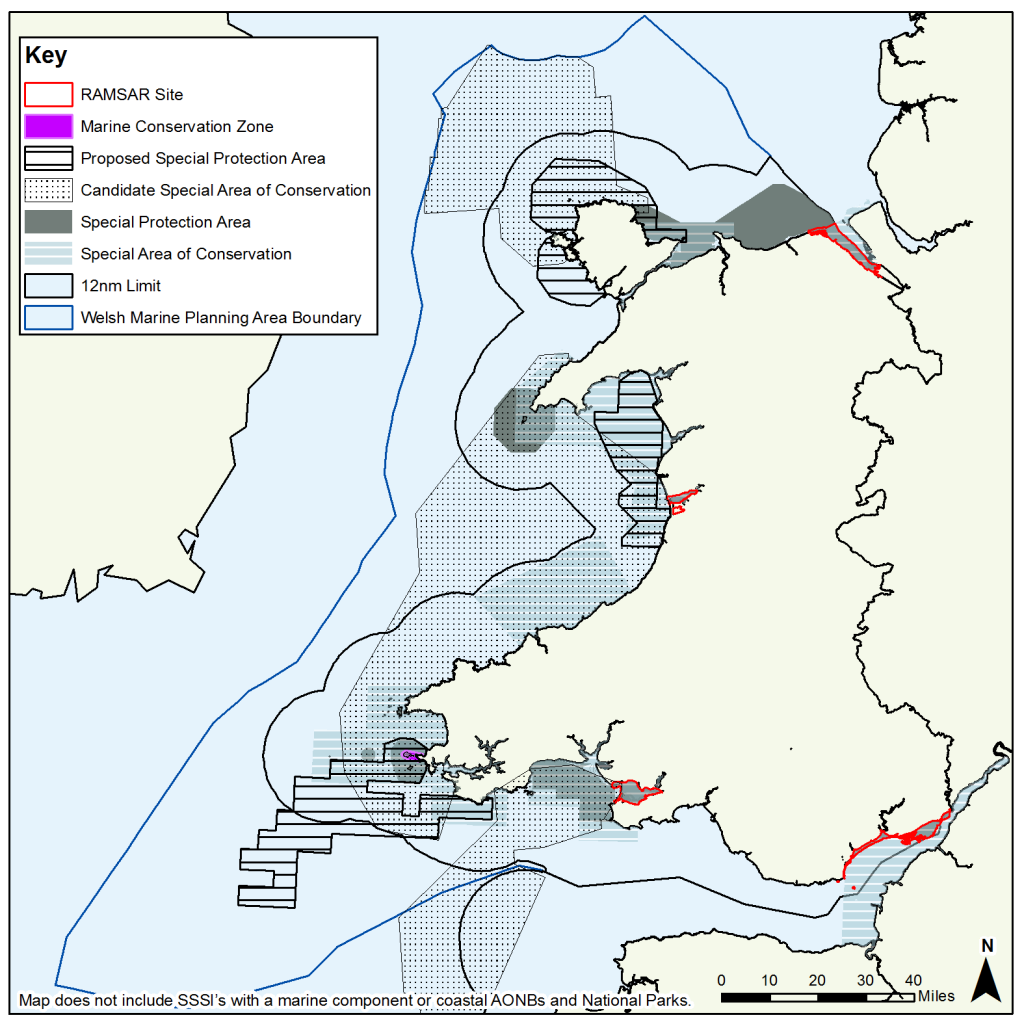 During the course of the inquiry, the Committee heard that the management of MPAs is shared by a number of different organisations nationally and locally, with Welsh Ministers having overall responsibility for securing effective management. A complex legislative policy framework surrounds MPAs, with many types of designations in place and a mix of voluntary and statutory measures governing different activities. Natural Resources Wales (NRW), in its written evidence to the Committee, stated that the overall purpose of MPA management is to achieve and sustain favourable condition of MPA features and sites.

A number of witnesses told the Committee that it had been their experience that, in many instances, the designation of Welsh MPAs hasn’t equated to protection or management, and concerns were raised over surveillance and enforcement. This situation was felt to be contributing to a deterioration in the condition of MPAs, with many not being in Favourable Conservation Status (FCS), as required by the European Nature Directives. Witnesses reported different experiences of engaging with the plethora of Welsh Government marine stakeholder groups. Whilst some indicated that improvements had been made, others highlighted a lack of transparency and noted that there was a danger of the extensive number of groups becoming “a displacement activity”, which could delay or detract from the delivery of management on the ground.

Concerns about the possible impacts of Brexit were raised. It was identified that the majority of Welsh MPAs have been designated under European legislation i.e. as Special Areas of Conservation (SACs) or Special Protection Areas (SPAs). As such, a potential loss of condition reporting and enforcement related to European commitments was found to be worry for a number of stakeholders, along with a strong desire for no loss of protection for Welsh MPAs after Brexit. Some felt Brexit to be an opportune time for Wales to look at its current MPA arrangements, with a view to seeing if aspects of designation and management could be harmonised.

The Climate, Change, Environment and Rural Affairs Committee concluded that Wales must have a bold and ambitious vision for protecting Welsh seas for future generations. It recommended that the Welsh Government must provide greater priority and leadership on the management of MPAs “as a matter of urgency”. For effective management and to ensure that all management authorities are fully engaged, the Committee called for an MPA strategy to be developed. Amongst its other recommendations, the Committee called for the Welsh Government to:

On the matter of Brexit, the Committee made a number of recommendations. These included that there should be a commitment from the Welsh Government to no loss of protection under future arrangements and for a replacement, affordable way to access to environmental justice to enforce marine protection (in line with the Aarhus Convention).

The Welsh Government responded to the Committee’s report on 3 October 2017. The Cabinet Secretary for Environment and Rural Affairs accepted the majority of the report’s 12 recommendations, whilst three were ‘accepted in principle’ and one was rejected.

The response indicates that the “Welsh Government is committed to an effectively managed MPA network which provides the full range of ecological and societal benefits”. It states it will continue to provide leadership through the MPA Management Steering Group and that an MPA Management Priority Action Plan was being finalised and that it would be in use from April 2018.

The Cabinet Secretary highlights that “departmental budgets remain very tight but I will keep this under review” and that NRW “will continue to fulfil its statutory duties from within its funding allocation”. On the matter of reporting MPA site condition and status, she states that the Welsh Government will report every six years on the condition of the Welsh MPA Network. Regarding public awareness of Welsh MPAs, it notes that the 2018 Year of the Sea campaign provides “a great opportunity to promote the value of our MPAs”. In Recommendation 12 the Committee asked the Welsh Government to explain how it would address any potential shortfall in funding for MPA work currently provided by Europe. This was rejected, with the response stating, “It is not for the Welsh Government to explain what it is going to do to replace funding lost as a result of exiting the EU”.

On consideration of this response, the Chair of the Committee has subsequently written to the Cabinet Secretary. The letter sets out that whilst the Committee welcomes her response, it did not feel that it adequately addresses either stakeholder’s concerns of fully addresses the recommendations, and as such, have sought further clarification and information. The Committee received a response from the Cabinet Secretary on 2 November.