Compared to the Final Budget 2020-21 total allocations (including Annually Managed Expenditure) to Welsh Government departments, or Main Expenditure Groups (‘MEGs’), have increased by one-third this year. Rising from £19.9bn to £26.5bn. By comparison, last years’ February Supplementary Budget allocated £19.7bn, which was an increase of just over 7% compared to the Final Budget 2019-20.

Funding for departments is outlined in the below infographic: 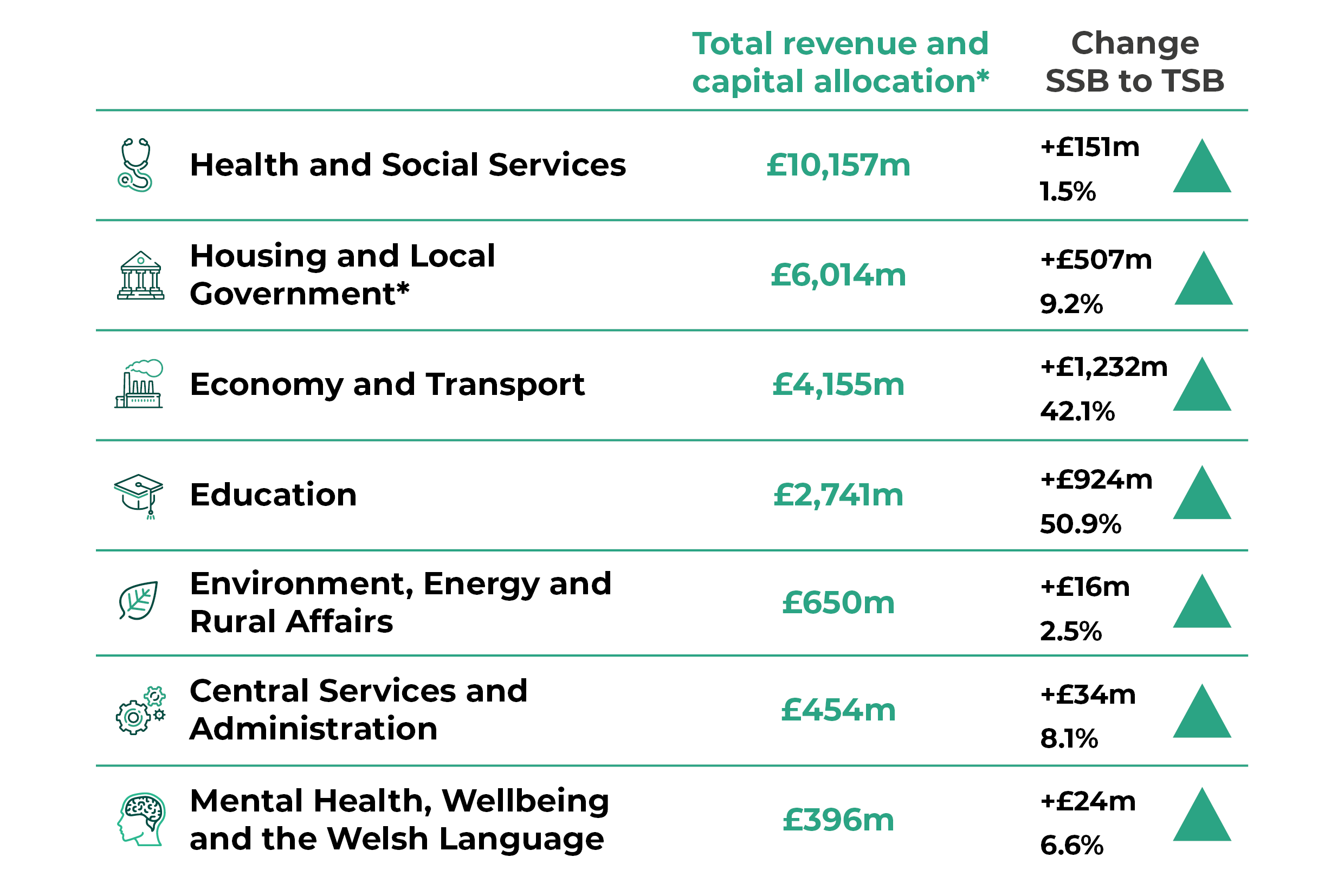 Figures are rounded. Refer to the Welsh Government Supplementary Budget 2020-21 for exact figures.

Two MEGs received three-quarters of the additional funding. The Economy and Transport MEG receives the largest additional allocation, with an extra £1.2bn of revenue and capital resources. That’s almost as much as was outlined for this MEG in the First Supplementary Budget (May 2020), which covered support for the first lockdown (£1.3bn).

There’s also a large increase in the Education MEG budget, which increases by over 50% to £2.7bn. However, the majority of this increase is associated with changes to student loans and isn’t funding being deployed in response to the pandemic or for a new policy.

It’s also worth noting that of the £2.9bn increase, around £755m is “non-cash”. This terms is generally used for accounting adjustments not involving a cash payment, and so is not available as a new resource for departments to spend. There’s also a further increase of £108m to Annually Managed Expenditure.

Where has the funding come from?

The Supplementary Budget says that net revenue funding available to the Welsh Government increased by £951m due to Barnett consequentials and other transfers. These transfers occur when the UK Government makes spending decisions in England that relate to devolved policy areas, as well as other technical reasons. Within that figure there is also a budget switch of £473m of revenue to capital, taking the total increase in the general capital baseline to £773m.

Instead, as well as using the additional funding made available to it by the UK Government, the Welsh Government has used its reserves to fund its spending plans. All of these allocations mean Welsh Government reserves shrink from just under £1.6bn at the Second Supplementary Budget to £345m.

Without increased flexibility, any funding at the end of the year might not be able to be carried forward. While the ‘Wales Reserve’ allows the Welsh Government to carry forward funding from one year to the next, it is capped at £350m. Additionally, the Welsh Government is only able to draw down a maximum of £125m of revenue and £50m of capital in any one-year from that reserve. This has led the Finance Committee and Welsh Government to request increased flexibility from HM Treasury at the end of the financial year.

In February, the UK Government announced an additional £650m of funding for Wales, which brought total funding allocated through the Barnett formula and guarantee this year to £5.85bn. That announcement came with the flexibility to carry over and spend this additional £650m in 2021-22. .

A budget to kick off reconstruction?

In October, the Welsh Government made a ‘post-covid pledge’, published alongside its ‘Covid Reconstruction – Challenges and Priorities’ paper. That pledge included a £320m investment package and the Third Supplementary Budget outlines exactly how that money will be spent. The package includes:

Following publication of the Supplementary Budget, the Welsh Government also published its ‘Economic resilience and reconstruction mission’. In his statement on the mission, the Minister for Economy, Transport and North Wales described his vision for a “well-being economy that drives prosperity, is environmentally sound, and helps everybody reach their potential”.

The Minister explained that an additional £270m has been made available to support businesses through the Development Bank of Wales for these objectives.

The Third Supplementary Budget had been delayed by a week, as it’s dependent on confirmation of the UK Supplementary Estimates, which were later than anticipated. The debate is now scheduled for tomorrow (9 March), you can watch it live on SeneddTV.