The Welsh Language Commissioner’s Annual Report: A year of challenges and loss

The Welsh Language Commissioner's Annual Report 2021-22 follows shortly after the untimely death of the Commissioner, Aled Roberts, in February 2022. The report describes itself as a “lasting record of his inspirational leadership, and of his care and passion for the Welsh language”.

During 2021-22, the Commissioner’s 5-year Report on the position of the Welsh language was also published. The Annual Report notes that the 5-year Report is considered to be one of the highlights of Aled Roberts’ work, and doesn’t hold back on the challenges of meeting the Welsh Government’s Cymraeg 2050 targets. The impact of the pandemic has made that task much harder and the 5-year report warns of the “significant recovery and investment that will be necessary”.

This article looks at some key issues identified by the Commissioner ahead of the Senedd debate on the Annual Report on Tuesday 15 November.

The Commissioner frequently expressed frustration at the Welsh Government’s limited progress in introducing new Welsh language standards regulations. The lack of progress can be seen in the number of bodies implementing standards, with only one additional body doing so during the 2021-22 reporting year, bringing the total to 124. Since Aled Roberts’ first Annual Report: 2019-20, the number of bodies implementing standards has only increased by two, raising questions about the pace of change in this area.

As a result, a specific work programme was drawn up by the Commissioner during 2021-22 to take the work of introducing new Welsh language regulations forward. This included a series of options and a timetable for the Minister for Education and Welsh Language to “enable progress in extending rights over the next five years”. Among the suggested options was a “rolling programme” to bring the remaining bodies named in Schedules 5 and 6 of the 2011 Measure within the standards regime.

The Annual Report notes the commitment made in the Co-operation agreement between the Welsh Government and Plaid Cymru to introduce Welsh language standards to more sectors during the Sixth Senedd.

While the debate will continue as to whether greater emphasis should be placed on regulation or promotion, the Annual Report notes that in a recent survey of Welsh speakers in Wales:

This aligns with results within the Welsh Language Commissioner’s assurance reports, which has shown steady progress and improvement in service provision since standards were introduced.

Freedom to use the language

The Commissioner has powers under the ‘Welsh Language (Wales) Measure 2011’ to investigate where an individual or an organisation has interfered with an individual’s freedom to communicate in Welsh.

While four people contacted the Commissioner during 2021-22 with allegations of interference, only one was investigated by the Commissioner. The number of investigations conducted under the Measure are generally low – during 2019-20, seven applications were made, with one investigated. However, the Annual Report alludes to potential issues with the process under the current legislative framework:

Much time is spent at the start of the process and many individuals who have submitted an application can lose interest and stop communicating with us. It is felt that there is too much burden on the applicant.

As a result, the Commissioner’s office has decided to examine the procedures currently in place, and to consider whether any “steps can be taken to make the process less burdensome within the current framework”.

The Welsh Government allocated £3.2 million in revenue funding and £256,000 in capital funding to the Commissioner for 2021-22.

The Commissioner’s net expenditure for the reporting period was £3.3 million. The majority of its spending goes on staffing costs, which accounts for over two thirds of the Commissioner’s outgoings.

The Commissioner’s report notes that it has received ”clear guidance from the Government to seek financial savings over the next period”. However, it says with staffing costs making up the majority of the Commissioner’s annual budget, the “ability to make further savings is limited”.

The Commissioner has been allocated the same level of revenue funding for 2022-23 as the previous year. The figure also remains static in the proposed allocations for 2023-24 and 2024-25. The Deputy Commissioner notes that while the provision of a ‘flat budget’ provides “relative certainty”, it also:

…poses a considerable challenge in trying to carry out all the functions and plans within the same financial amount as costs increase.

The position of the Welsh Language 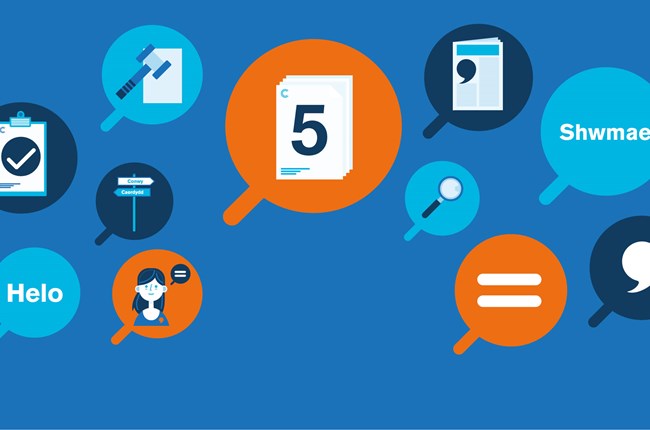 The report reflects on policy and legislative developments as well as data on Welsh language ability during that time. It notes the steady year-on-year increase in the number of Welsh speakers (as reported in the Annual Population Survey), which by 31 December 2020 had increased to 883,600 (29.1%). In March 2010, the figure stood at 731,000 (25.2%). However, it is the Census that is the key source to measure progress towards a million Welsh speakers. Census 2021 data on Welsh language ability is expected to be published soon.

Among the conclusions in the 5-year report, the Commissioner notes that, despite significant progress to date, it is “only by continuing with the same momentum and using the Welsh Language Measure to its full extent that we will see similar progress over the next five years”. To this end, the Commissioner re-issued a plea to the Welsh Government to “resume the process of imposing standards as a matter of urgency”.

However, the Commissioner states that without doubt, the development that grabbed the headlines’ during the 5-year period was the publication of the Welsh Government’s Welsh-language strategy, Cymraeg 2050: A million Welsh speakers.

The Commissioner is clear that if Cymraeg 2050 is to succeed, and the Welsh Government is “serious” about the targets, the ”objectives and spirit [of Cymraeg 2050] need to be at the heart of every statement, policy and act”.