On Tuesday 14th November 2017, a debate will be held in Plenary on the Welsh Language Commissioner’s Annual Report 2016-17.

The statutory report provides information and details regarding the work of the Commissioner and a review of issues relevant to the Welsh language during the reporting year.

The Commissioner recently appeared before the Culture, Welsh Language and Communications Committee (CWLC Committee) to discuss her report.

In her Foreword to the report, the Commissioner states that in the time she has been in post, there has been a:

…shift in the public debate on the Welsh language. Now, in discussions on increasing the use of Welsh, the question asked is not ‘why’ but ‘how’.

The Commissioner believes there is now a ‘desire’ among organisations that are subject to Standards to comply with the new duties, and that the Welsh Government’s target of a million Welsh speakers by 2050 has helped with the discourse. Nevertheless, the Commissioner notes there is a need to evolve and develop legislation, building on the structures already in place.

At the end of the 2015-2016 financial year, new rights to use the Welsh language came into force through the process of imposing standards on Welsh Ministers, local authorities and national park authorities. This is therefore the Commissioner’s first Annual Report that reports fully on the implementation of the Standards. 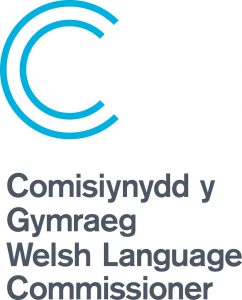 During the reporting year, Standards were also imposed on an additional 52 organisations, including Estyn, the Police Forces, Fire Authorities and the BBC.

Despite progress in imposing Standards, some large public organisations in Wales continue to fall outside the Standards regime. Of the 78 organisations currently implementing Standards, the health sector is not one of them. The Commissioner notes that the ‘public’s rights to use Welsh will strengthen substantially when standards will be imposed on health organisations’. The Welsh Government has yet to bring forward regulations for standards for this sector.

The Commissioner, in evidence to the Committee, suggested there were increasing frustrations with the delay, causing issues on the front-line:

By now that does create problems at a grass-roots level because social care has been operating within the standards for a year and a half. The health sector, which is a close partner to social care, is working within different regimes. As I go around and talk to various heads, there is frustration that there are two regimes.

The Commissioner in her evidence to CWLC Committee said that elements of the Welsh Language Measure are bureaucratic and burdensome, driven by process rather than output. However, the Commissioner sounded a warning that there were risks in making fundamental structural changes when current structures are still in their infancy:

It’s very early days…barely six years since the establishment of the commissioner’s office and the implementation of the legislation...If there is any fundamental structural change, there is a risk that we would see that process slowing down, we would see uncertainty among organisations and the public.

During the scrutiny of the Commissioner’s report, a Committee Member referred to some frustration among local authorities about the ‘long winded’ nature of the complaints process. The Commissioner stated that the legislation does not currently provide for a route to ‘early resolution’. However, the Commissioner also noted that:

We’ve implemented this complaints process now for a period of 18 months, under the full legislation, and, in looking at the data yesterday, 43 per cent of the complaints submitted to our organisation actually lead to an inquiry.

Welsh Ministers allocated £3.051 million to the Welsh Language Commissioner for 2016-17. The Commissioner’s outturn, that is, the amount spent during the financial year was £3.065 million.

The Commissioner notes in her report that any additional cuts to her budget in the future would be ‘highly challenging’, and that in practical terms, could mean some non-statutory work would cease. The funding allocated to the Commissioner for 2017-18 through to 2019-20 remains flat in cash terms at £3.051 million.

In responding to questions in Committee about her funding, the Commissioner said that she accepts the reality of the financial climate. However, she also noted how it impacts on her work:

What won’t happen to the same extent as perhaps it would have happened in the past is elements of research work… The other side that doesn’t receive as much resource as we would like is the promotion side, that softer work.

Working in collaboration with businesses and third sector organisations, the Commissioner aims to encourage, promote and facilitate opportunities to use the language within these sectors. Key to this is working with umbrella bodies such as the WCVA and the Retail Consortium in Wales. The Commissioner also works closely with public bodies such as Sport Wales to reach out to sports clubs.

One outcome of the collaboration with Sport Wales during 2016-17 was the launch of a support pack: Welsh: Give it a go! It gives practical advice for sports clubs and societies on developing activities in Welsh or bilingually.

The Commissioner has also continued to work closely with the supermarkets and high street banks through established forums. The Commissioner in evidence to the Committee said of the forums:

They are generating their own solutions… there is a desire to resolve problems, but further to that, they see an economic business benefit to the Welsh language.