This article summarises the key allocations, as well as the Welsh Government’s funding and how much it has left to spend, as set out in the Supplementary Budget. We’ve produced a separate Budget Glossary to explain the terms used.

How much has the Welsh Government allocated in the Supplementary Budget?

The Welsh Government made significant financial allocations to help Wales cope with the impact of the Covid pandemic. Spending announcements were made throughout 2020-21 and 2021-22, and were reflected in supplementary budgets. Our previous articles provide the background:

This Supplementary Budget returns to the pre-pandemic norm. Most of the allocations relate to technical changes that implement a new international accounting standard for leases (the International Financial Reporting Standard (IFRS) 16, Leases).

These changes lead to a net increase of £286.3m (or 1.3%) in the budget for discretionary areas of spending, compared with the Final Budget 2022-23. However, these are budget reclassifications for which HM Treasury has provided cover for the period 2022-23 to 2024-25 to the Welsh Government. They don’t affect the Welsh Government’s spending power.

DEL is the discretionary part of the budget that the Welsh Government chooses how to spend.

AME is the non-discretionary part of the budget.

The changes compared with the Final Budget do not reflect the budget reclassifications for the implementation of International Financial Reporting Standard (IFRS) 16, Leases, which are included in the allocations for Revenue DEL, Capital DEL, and AME. 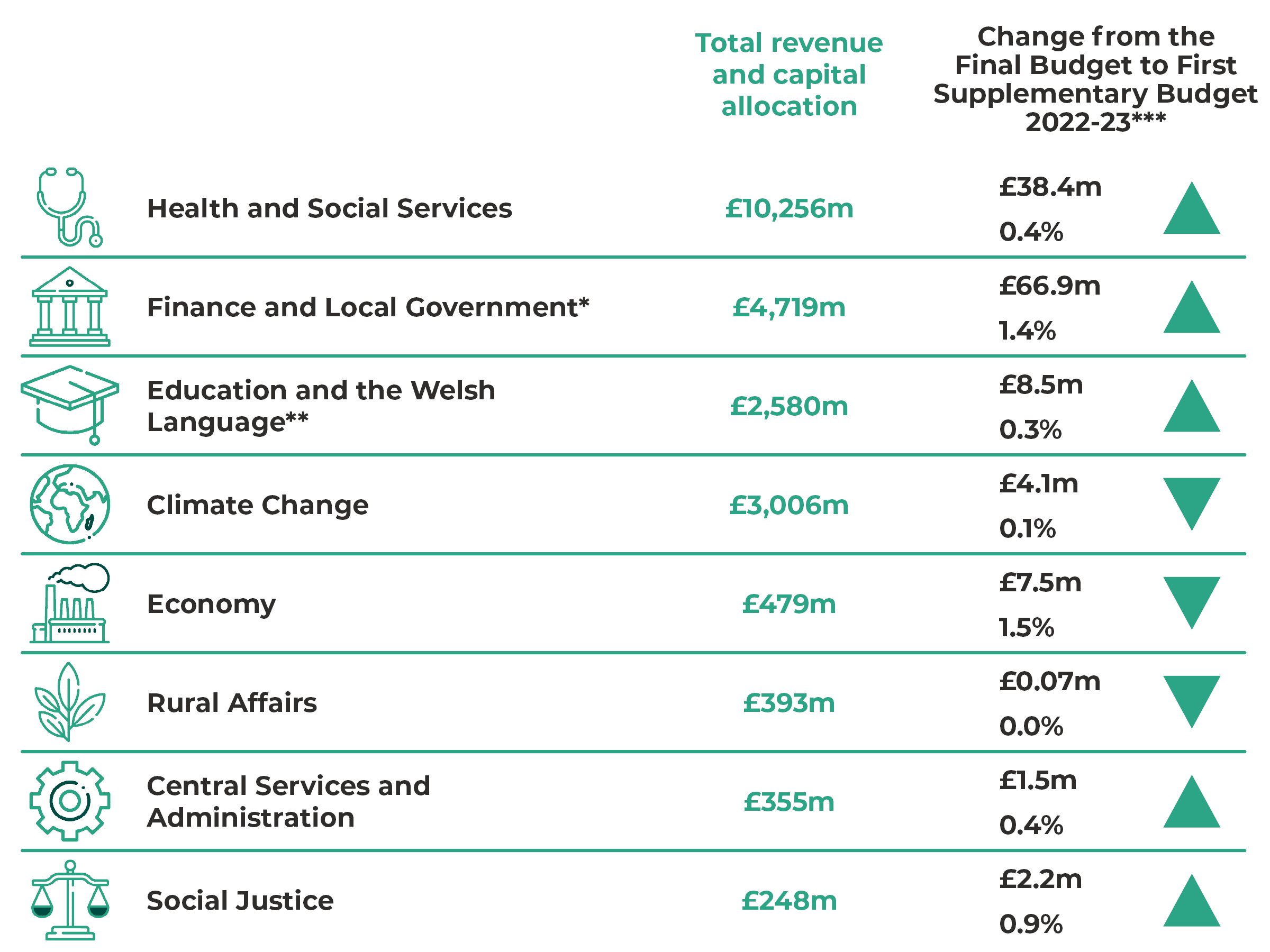 ** Includes allocation of £460 million of non-fiscal revenue due to student loans.

*** The changes do not reflect the budget reclassifications for the implementation of International Financial Reporting Standard (IFRS) 16, Leases, which are included in the figures for the Total revenue and capital allocations.

Response to the war in Ukraine

The Welsh Government has made a “clear commitment to welcome those escaping the conflict in Ukraine”, becoming an official or “super” sponsor in March 2022. The Supplementary Budget identifies £20m for the Welsh Government’s response to the war.

Working with local authorities and others, the Welsh Government has put infrastructure in place to support refugees arriving in Wales. This includes establishing a helpline, Arrival Hubs and a network of Welcome Centres across Wales. It has also established a national Contact Centre, which it says plays an “absolutely critical role in establishing travel plans, enabling the flow of people into Wales and ensuring everyone is matched to appropriate accommodation and support”.

By 9 June, “nearly 600 people” had arrived in the UK under the Welsh Government’s Super Sponsor Scheme.

On 30 June, the Minister for Finance and Local Government, Rebecca Evans, said “there is potential […] that further funding will be required later on and, if that is the case, you'll see it in the second supplementary budget”.

How has the funding position changed?

The Supplementary Budget confirms there are no changes in Wales devolved financing (Welsh Rates of Income Tax, Land Transaction Tax, Landfill Tax and non-domestic rates) as “forecasts continue to reflect those published at the time of the Final Budget”. Additionally, the Welsh Government hasn’t proposed any changes to its borrowing plans, which will see it borrow the maximum permitted (£150m) under the Fiscal Framework in 2022-23.

"There’s not a huge amount in the reserve"

Since the Final Budget, the Welsh Government has increased some of these reserves: its unallocated fiscal resource reserve increased by £52.2m (to £152.3m); and its financial transactions capital reserve by £1.0m to £214.1m.

The Welsh Government also holds a non-fiscal resource reserve, which has increased by £178.8m (to £699.2m).

While the Welsh Government has increased the amounts that remains unallocated, the Minister acknowledged “there’s not a huge amount in the reserve”. With inflation hitting a 40 year high and the Bank of England currently expecting it to increase to around 11% towards the end of 2022, such pressures will impact on the cost of delivering public services.

On 30 June, the Minister told the Senedd’s Finance Committee the “budget will be worth £600 million less over this three-year spending period than we understood it to be at the time it was settled”. She said the Welsh Government had been “making a strong case to UK Treasury that budgets should be given a general uplift to account for that to help us in meeting our plans”. We’ve yet to see whether UK Government will allocate additional funding for this.

The Senedd will debate the Supplementary Budget on 12 July 2022. This will be available to view on Senedd.TV.