There has been considerable political debate over the Shared Prosperity Fund and Levelling Up Fund. These new regional development funds will be debated in Plenary on 15 June.

The UK Government has used its powers under the Internal Market Act 2020 to enable it to work directly with local authorities to deliver these funds. It says that the most successful projects are those delivered by local communities who identify solutions themselves.

However, the Welsh Government is strongly opposed to this approach. The Minister for Economy told the House of Commons’ Welsh Affairs Committee on 27 May that having UK-wide funds is “a very direct and obvious encroachment on devolved competence and influence. That almost appears to be an objective, which is unnecessarily confrontational.”

What do we know so far about the UK Shared Prosperity Fund?

The arrangements for the Shared Prosperity Fund are of particular importance to Wales, as they will replace EU Structural Funds. During the previous round of Structural Funds, Wales received more than double the amount per person than any of the other devolved nations and English regions. 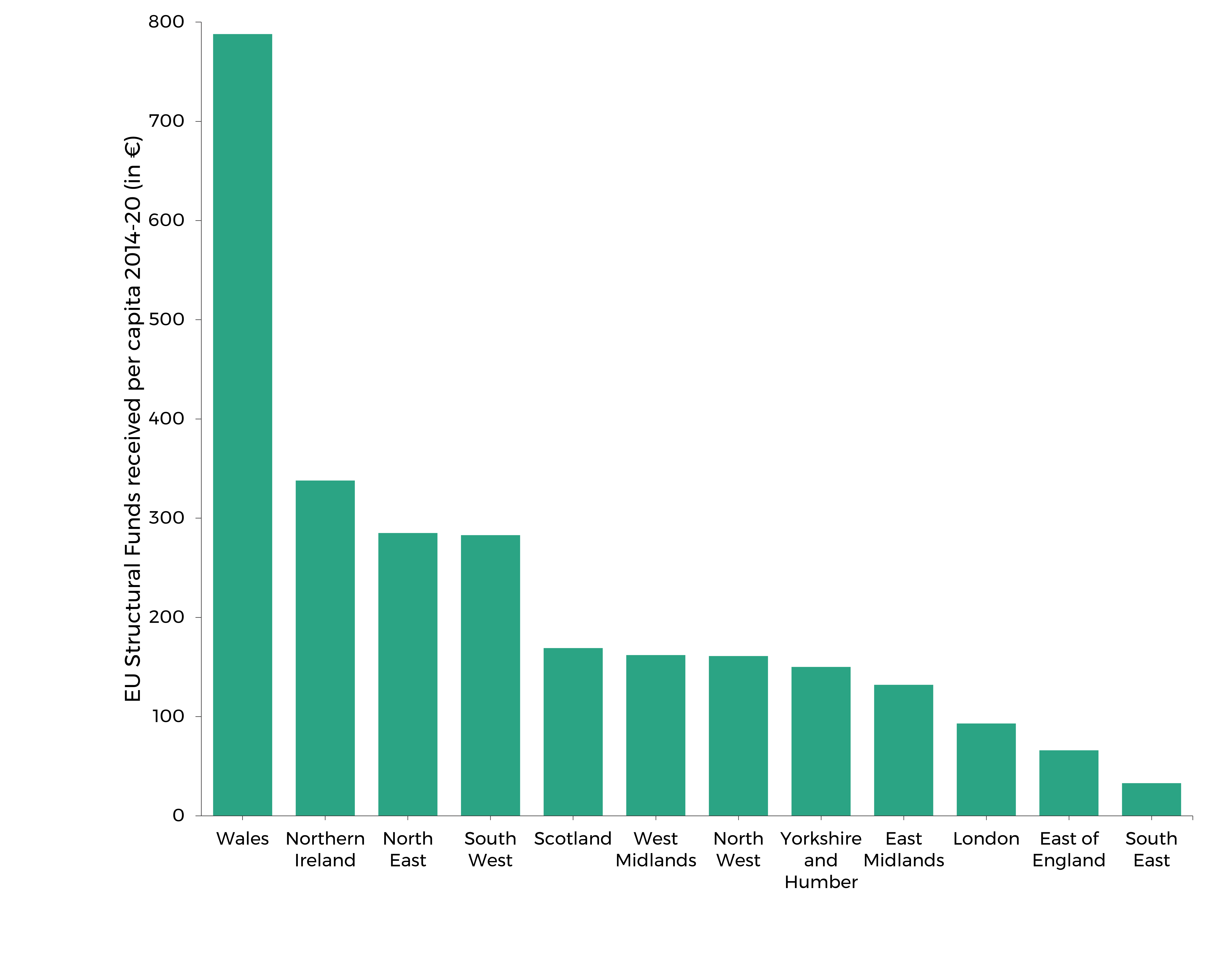 The UK-wide nature of the Shared Prosperity Fund differs from the arrangements for Structural Funds, where funds coming to Wales are managed by the Welsh Government. The UK Government will work directly with Welsh local authorities to deliver the fund. Devolved administrations will have a role in the governance of the fund, although what this will involve isn’t yet clear, and the UK Government will engage with them and local partners ahead of the launch of the fund.

The UK Government set out heads of terms for the Shared Prosperity Fund in the 2020 Spending Review, and further details will be published in a framework later this year, before the fund launches in 2022. Key points include:

What is the Community Renewal Fund, and how does it relate to the Shared Prosperity Fund?

The Community Renewal Fund will provide £220 million across the UK in 2021-22 to pilot approaches and programmes ahead of the launch of the Shared Prosperity Fund, although the design, eligibility criteria and duration may differ between the funds. The UK Government is running a competitive bidding process, under which lead authorities are required to submit project shortlists by 18 June.

While all parts of Wales can apply to the fund, the UK Government has identified 100 priority places across Great Britain of which 14 are in Wales and has published its methodology for prioritising areas. The selection process will prioritise bids that target these places alongside bids that demonstrate a “good contribution to strategic fit and delivery/effectiveness”.

How will the Levelling Up Fund operate?

While it was initially decided that the Levelling Up Fund would only apply in England, the UK Government subsequently announced it would be extended to the whole of the UK, and that it would work with local authorities to deliver this. The UK Government said that, where it considers it appropriate, it will seek advice from the Welsh Government on the deliverability of projects in Wales and how these align with existing provision.

The fund will “invest in local infrastructure that has a visible impact on people and their communities and will support economic recovery”. It will provide up to £4.8 billion funding across the UK until 2024-25, with at least £800 million invested in Scotland, Wales and Northern Ireland. Wales will receive at least 5% of total UK funding. The priorities for the first round of funding, which closes on 18 June, are transport; regeneration and town centre investment; and cultural investment.

What are the differences of opinion between the UK and Welsh governments on how funds should operate?

The Minister for Economy told the Welsh Affairs Committee that he wanted to see a reset of the relationship between the UK and Welsh Governments, and for both governments to be involved in governance of the funds. For example, the UK Government would set the overall policy agenda for the Shared Prosperity Fund, and monitor and evaluate the fund across the UK. The Welsh Government would be responsible for managing and evaluating Welsh investments. It would also work with local authorities, who would collaborate through four regional Corporate Joint Committees to co-ordinate and manage local and regional investments.

The UK Government believes that there is evidence that shifting responsibility directly to local authorities will lead to better projects delivering better outcomes. However, the Welsh Government has expressed concern that it will provide a “much more localised and atomised approach” that has not learned lessons from the 2000-06 round of Structural Funds in Wales, which indicated that a smaller number of more strategic and regional projects delivers most benefit.

The Welsh Government wants to see the Shared Prosperity Fund include a mixture of local, regional and Wales-wide investments. It has highlighted that major Wales-wide policy areas such as apprenticeships and Business Wales have historically received support through Structural Funds, and that replacing funds in a way that does not allow for a Wales-wide approach will undermine delivery of these programmes. However, the Secretary of State for Wales has criticised the Welsh Government’s approach to using Structural Funds, stating that “over half of the £1.8 billion Wales has received in EU Structural Funds since 2014 flowed straight to Welsh government departments”, while not enough went directly to local communities.

The Welsh Government has also been critical of the methodology used to prioritise areas for the Levelling Up Fund, calling for deprivation and transport data to be included in calculations. The UK Government has said that it has not included deprivation in the methodology as it “is not a catch-all that reflects the outcomes from the funds that we are trying to deliver”.

What have local authorities and parliaments said about the funds?

In evidence to the Welsh Affairs Committee on 27 May, local authority leaders set out their views on the proposals for the Community Renewal Fund and Levelling Up Fund. Key points from this session include:

Both Westminster and Senedd Committees have given their views on the development of the Shared Prosperity Fund. The Welsh Affairs Committee published its report in October 2020. The Fifth Senedd’s External Affairs and Additional Legislation Committee and Finance Committee also published reports, in 2017 and 2018 respectively.

The introduction of these new funds poses important questions for the Welsh Government. Will it be able to achieve the Welsh Labour manifesto commitment to secure Wales’ “fair share” of the funds and for funding to be spent in line with the framework for regional investment? What role will it play in a changed regional development landscape? How will the funds interact with and influence future regional development policy? And how will the Welsh Government fund delivery of key regional and Wales-wide policies in a post-Structural Funds world?