The ‘real’ Living Wage and fair work: What are the latest developments?

This week is Living Wage Week. And this year is the 20th anniversary of the establishment of the Living Wage movement. The ‘real’ Living Wage (referred to as the Living Wage for the rest of this article) has now increased to £9.90 per hour in Wales.

So what is the Living Wage, how does it differ from legal minimum wages, and what is the Welsh Government doing to support it? And what are the wider considerations in delivering fair work for low-paid workers?

What is the Living Wage and how does it differ from legal minimum wages?

It’s easy to get confused when people talk about the Living Wage, the National Living Wage and the National Minimum Wage – all of these sound fairly similar but refer to different hourly rates of pay.

Figure 1: Graphic showing the differences between the Living Wage and legal minimum wages

Workers aged under 23 are covered by the relevant National Minimum Wage for their age group, which is a legal minimum wage set by the UK Government:

What do we know about payment of the Living Wage to workers in Wales?

The Living Wage Foundation notes that “it’s the low paid and insecure work largely done by women that has kept our society going in its darkest hour”. Women are much more likely than men to work part-time, which Professor Jill Rubery considers a major factor in low pay.

Figure 2: Number and percentage of jobs that paid less than the Living Wage in April 2021 by gender and working hours 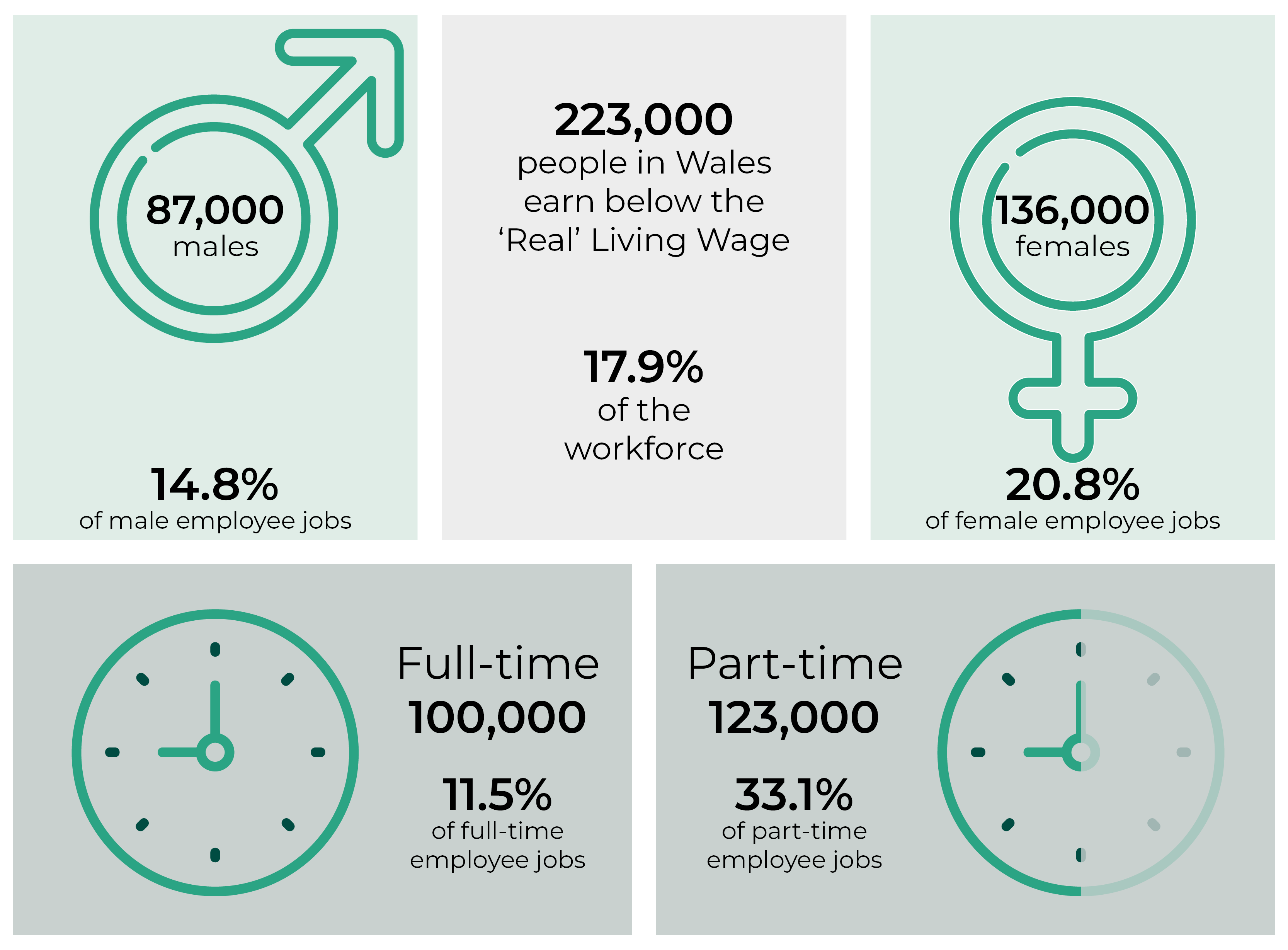 Source: Office for National Statistics, Estimates of the number and proportion of employee jobs with hourly pay below the living wage, by work geography, local authority and parliamentary constituency, UK: April 2020 and April 2021

How is the Welsh Government supporting greater payment of the Living Wage, and how could it build on this?

The Welsh Government’s Programme for Government commits to paying care workers the Living Wage. The Resolution Foundation found that 56% of care workers in Wales earned less than the Living Wage, particularly those employed in the private sector. The Deputy Minister for Social Services said in June 2021 that she would be asking the Social Care Fair Work Forum to make recommendations on how to meet this commitment across the sector by 2024, with plans to start delivery by April 2022.

Both employers and trade unions want to see higher pay in the sector. In the context of labour shortages, Care Forum Wales has called for additional funding for social care to enable social care workers to earn as much as in the NHS.. While welcoming the pay increase, the Wales TUC wants to see wider improvements to working conditions, and highlighted that the Living Wage was the lowest pay rate of the options considered by the Inter-Ministerial Group on Paying for Social Care.

What does the recent increase in legal minimum wages mean for low-paid workers?

What is the Welsh Government doing to promote fair work more widely, and what more could it do?

The independent Fair Work Commission set up by the previous Welsh Government highlights that pay is an integral part of fair work, but that other elements of work are also critical to this. The Living Wage Foundation found that Wales has 26% of workers in insecure work, just over half of whom also earn below the Living Wage, and higher than elsewhere in the UK.

The Welsh Government will be introducing the Social Partnership and Public Procurement Bill for consideration by the Senedd next spring to require Ministers to set and take steps to achieve fair work objectives, responsible procurement and strengthen social partnership. Beyond this legislation, the Programme for Government commits the Welsh Government to further actions such as progressing the recommendations of the Fair Work Commission; exploring legislation to address pay gaps; and strengthening the Economic Contract that businesses seeking Welsh Government support are required to commit to.

A range of organisations have called for the Welsh Government to take action to create fairer work, based on their differing priorities.

The Wales TUC has established a commission on the future of devolution and work to consider where employment powers should lie. It has called for a range of actions from the Welsh Government including establishing social partnership arrangements in low-paying sectors; reskilling workers to meet the needs of future workplaces; and introducing fair work conditions for Welsh Government grants to businesses.

Businesses who responded to the social partnership consultation wanted to see greater recognition of the role that business can play in contributing to fair work. The Federation of Small Businesses Wales has called for the Welsh Government to develop a self-employment strategy, highlighting that 68% of self-employed people feel they have fewer employment rights and protections than employees.

The Deputy Minister for Social Partnership said recently that the Welsh Government “need to do a piece of work looking actually at what the future of fair work looks like now post pandemic”. What the Welsh Government’s plans for this are, and what role the Living Wage plays in this, will be of particular interest going forward.