The past year has also advanced the digital agenda and accelerated the speed of innovation . But what’s the role of policymakers in this increasingly virtual world? And how can inequalities caused by digital exclusion be reduced?

The world is changing. In 2016 it was declared that:

We stand on the brink of a technological revolution that will fundamentally alter the way we live, work, and relate to one another.

But the technology trends that propelled the fourth industrial revolution, known also as the ‘intelligence revolution’ or ‘industry 4.0’, have been accelerated further by the pandemic. One tech leader said they had seen “two years’ worth of digital transformation in two months”.

Heads in the cloud

Storing and accessing data and programmes over the internet, known as ‘cloud computing’, has been vital in helping us adapt.

Cloud computing was harnessed to support the public health response through contact tracing apps and virtual healthcare, and allowed the delivery of critical public services.

The use of online team collaboration tools has soared, with Microsoft Teams experiencing a 40% increase in demand during lockdown. Cloud-based applications allowed educators to deliver online learning, and provided knock-on positives for the environment too.

The flexibility of cloud computing helped shaped our lives and accelerated its adoption in 2020, with further growth forecast in 2021. But this comes with increased data safety and security risks, which will demand a proactive approach to keep cloud environments secure. And what skills will the workforce need to adapt to cloud computing long-term?

While high street retailers have suffered, internet sales as a percentage of total retail sales in the UK rose from 22% at the beginning of March 2020, to over 36% in January 2021. Net profit for Amazon was up 84% for the year. This shift to digital transactions has also propelled growth in delivery, transportation, and warehouse jobs. 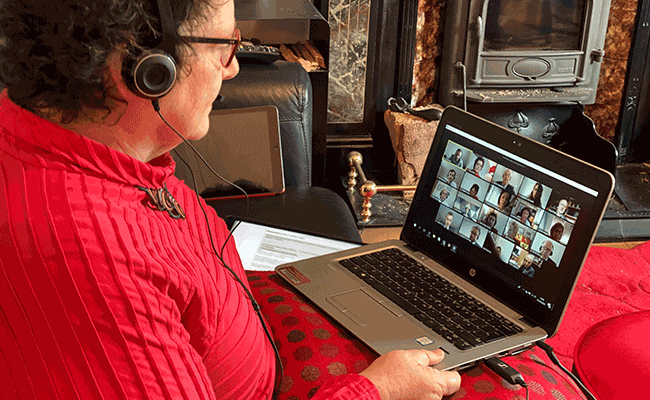 It’s impossible to not mention the rise in video conferencing software. ‘Zoom’ was a verb in 2019, but is now a household company name. It is described as the pandemic’s success story, and has reported more than 300 million daily participants in virtual meetings. Video conferencing has enabled a safe continuation of a whole host of activities, not to mention the work of the Senedd, which was the first parliament in the UK to go virtual.

To minimise the risk of exposure to the virus, and supported by cloud computing, those that could, worked from home. This led to the reshaping of company culture, and a few interesting online interactions. Even Hollywood stars had to adapt.

Recent researchresearch found that home-working in Wales increased from 3.8% to 36.8% between March and April 2020. It also found 93.3% of employees wanted to continue working from home, suggesting that:

… the great homeworking experiment will become an entrenched and widely accepted feature of work even when social distancing restrictions are fully lifted.

The previous Welsh Government set a long-term ambition for 30% of the Welsh workforce to work remotely on a regular basis, and some Some big employers have already committed to more homeworking and less office space. Others are aiming for workforces to be ‘hyper-collaborative’ when in the office, and ‘hyper-productive’ when working at home.

A report by McKinsey found that continued remote working and virtual meetings:

… could prompt a large change in the geography of work, as individuals and companies shift out of large cities into suburbs and small cities.

Office for National Statistics (ONS) analysis found that ‘those that could’ adapt to home working are employees in higher-paying jobs. Another study found that lower paid workers are more likely to lose their jobs as a result of the pandemic, potentially worsening existing inequalities in the labour market.

What will be the impact of increased homeworking on our health and lifestyles? And will urban retail, hospitality, and public transport ever return to pre-pandemic levels?

The ‘intelligence revolution’ means that an increasing range of intellectual tasks can be performed by AI, robotics, and automation, mirroring how the first industrial revolution drove the automation of repetitive physical tasks.

The previous Senedd’s economy committee considered it ‘imperative’ that Wales should be “the provider, not just the consumer of emerging technologies”. A key message of the last Welsh Government’s 2019 review into digital innovation and the future of work was that:

… over the next decade, digital technologies will result in both job displacement and creation, but of even greater significance is its impact on how we experience work.

The proportion of jobs at high risk of automation by the early 2030s varies from 26% to over 36% across Welsh regions. A 2017 study into where automation will hit hardest found that:

… the unequal geographical distribution of the impact of automation deserves immediate attention by Government, particularly as it is regions that have previously suffered the effects of industrial decline that are likely to be worst hit.

So how can policymakers make sure that digital innovation doesn’t create or worsen inequalities between people and regions? And how can sectors like manufacturing be equipped to take advantage of the new opportunities associated with technological change?

The need for speed

Businesses and individuals with increasing digital demands need to be supported by reliable digital infrastructure.

It is estimated that 94% of Welsh premises have access to superfast broadband. But a Welsh Government study from 2019 suggested around 79,000 properties do not, and with no prospect of connection in the next three years.

In December 2020 the National Infrastructure Commission (NIC) published a report into digital communications infrastructure. Among other things, this report concluded that:

Too much attention has been paid by policymakers to promoting fibre to the home technology in the UK and not enough on improving mobile broadband provision.

Despite being an integral part of modern society, internet accessibility isn’t equal, and 10% of people are still not online or using the internet regularly. Yet local infrastructure isn’t the only barrier to digital inclusion, and other challenges include low income and inability to get a data contract.

ONS analysis exploring the digital divide shows that although digital skills are increasingly important, people remain excluded. Digital inclusion has been described as a “key social justice and equalities issue”.

The previous Welsh Government’s digital inclusion strategy explains that the pandemic has:

… drawn attention to the widening inequalities caused by digital exclusion in accessing services, receiving vital information and purchasing goods online. The accelerating shift of public services to online platforms risks further increasing the gap between the digitally included and excluded.

The Wales Centre for Public Policy says that Wales’ digital inclusion strategy needs to be “tailored to the challenges faced by different groups”, recognising that some will still need access to high quality in-person services.

A new Digital Strategy for Wales and its delivery plan were recently published, setting out the last Welsh Government’s vision and ambition for a coordinated digital approach. But it’s clear that:

… digital is not just about computers – it’s about people.