Taxing times in the Sixth Senedd?

What will Welsh taxes look like in the future? Will local taxes be reformed and will the Welsh Government introduce new taxes in the Sixth Senedd? 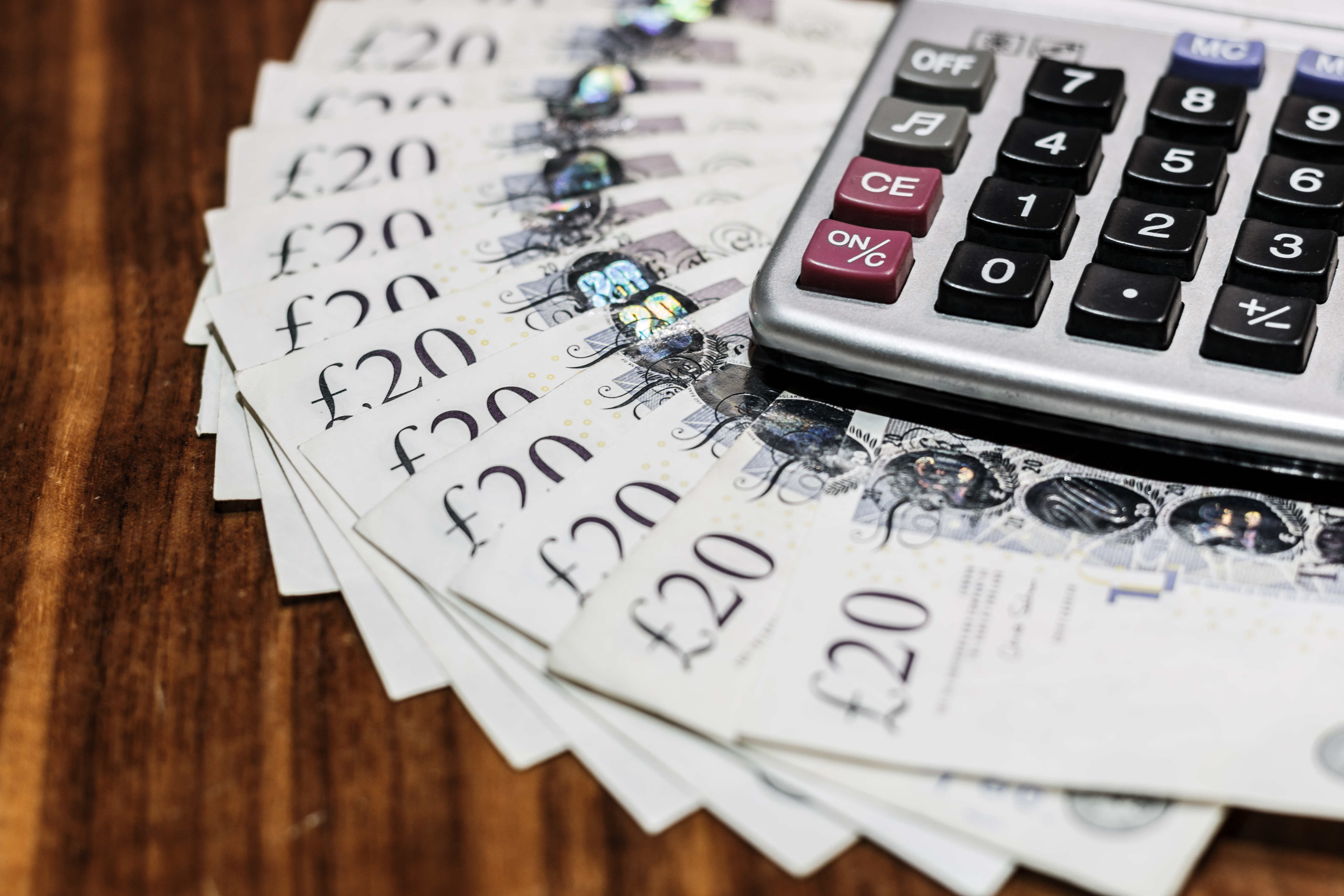 Significant issues may need to be confronted in the Sixth Senedd. It’s unclear how the pandemic will impact devolved tax policy, particularly income tax. Criticisms of the approach to local taxation and proposals for new taxes developed in the Fifth Senedd may also lead to big changes.

Yet tax policy is a sensitive subject so implementing any changes may prove challenging for the next Welsh Government.

This was followed by the implementation of Welsh Rates of Income Tax (WRIT) in April 2019, which is the largest source of tax revenue available to the Welsh Government.

The Office for Budget Responsibility (OBR), the body responsible for forecasting Welsh tax revenues, estimated that the Welsh Government would receive over £2.1 billion in WRIT revenue in 2021-22, while LTT and LDT would raise £260 million (before an extension to the LTT holiday) and £34 million respectively.

Welsh tax revenues represent 17% of the Welsh Government’s budget for 2021-22.

Composition of the Welsh Government’s Budget 2021-22 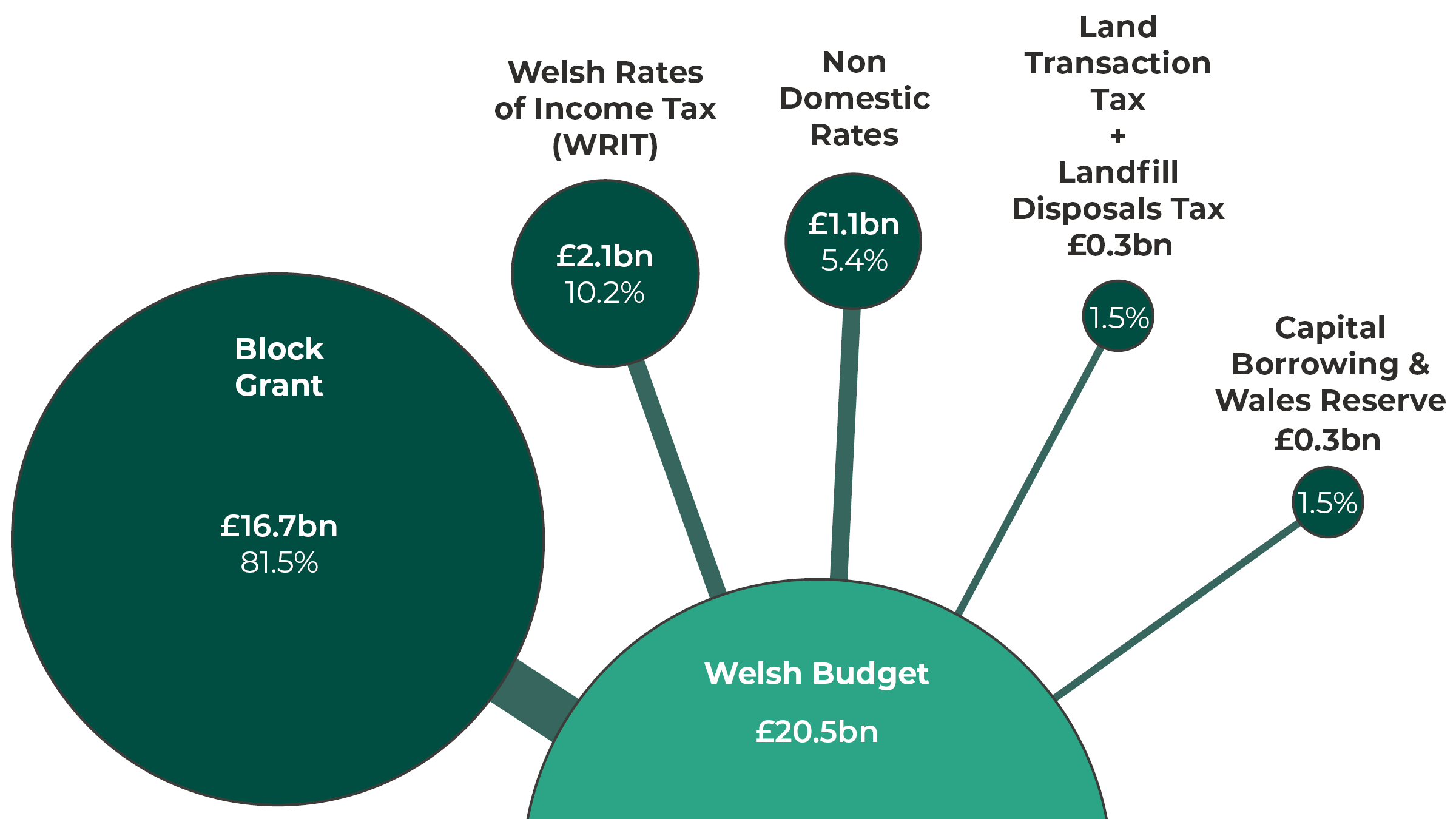 There have yet to be any changes to WRIT with Welsh Labour committing in 2019 not to increase income tax rates during the Fifth Senedd.

However, given the economic challenges faced by Wales due to the COVID-19 pandemic, the Sixth Senedd could see pressure for the first rate changes to WRIT .

The porous nature of the Wales-England border means any divergence between UK and Welsh income tax rates could lead to taxpayers migrating across the border, impacting on future WRIT revenues.

Given that nearly 48% of the Welsh population live within 25 miles of the border and 4.9 million within a similar distance on the English side, this could be a significant issue.

Council tax is one of the financial levers available to local government. Around £1.8 billion is raised annually from 1.4 million dwellings.

The Welsh Government has amended the council tax regime in various ways. For example, in the Fifth Senedd local authorities gained powers to charge a premium of up to 100% on second homes.

An Institute for Fiscal Studies (IFS) review, published last year, concluded that council tax was “out of date, regressive and distortionary”, suggesting it needed to be “revalued and reformed”.

Non-domestic rates (NDR) – often known as ‘business rates’ - are also a significant revenue source, generating over £1 billion annually for local government. Those funds are collected and pooled nationally before being redistributed among local government bodies. Revaluations are more frequent for than council tax, the most recent having taken place in 2017. The next list was originally planned for 2021, but due to the pandemic will not come into effect until 2023 in order to “better reflect the impact of COVID-19”.

A number of changes to NDR were made in the Fifth Senedd, including implementing a permanent Small Business Rates Relief scheme, switching the inflation measure used for uprating from RPI to CPI and efforts to tackle avoidance.

The UK Government is currently undertaking a fundamental review of business rates (due to conclude in autumn 2021), any changes may have implications for the pace of change in Wales. That review considers the possibility of more frequent - three yearly - revaluations, something that has already been implemented in Scotland.

Several studies have acknowledged that council tax is regressive. As such, the Welsh Government has looked at the feasibility of replacing council tax and NDR with a local land value tax (LVT). This system of taxation operates in Denmark, New Zealand and some parts of Australia and the United States.

LVT is a levy on the value of land and, unlike most property taxes, is a tax on the land itself disregarding the value of any improvements made to that land.

The Welsh Government commissioned Bangor University to conduct an initial feasibility study of LVT. It found that that while it could raise sufficient revenues to replace current local taxes, the data requirements to implement LVT weren’t currently met.

The previous Finance Minister, Rebecca Evans, told the Fifth Senedd’s Finance Committee that the Welsh Government has also commissioned the Institute for Fiscal Studies to consider the impact of a council tax revaluation to make the system less regressive, and Cardiff University to conduct research into whether council tax could be based on local assessments of household income.

The Wales Act 2014 enables the Welsh Government to seek competence from both Houses of the UK Parliament and the Senedd to introduce new taxes to Wales. The Welsh Government is currently seeking powers for a vacant land tax and investigating three other potential areas for new taxes:

The last Welsh Government found the process “protracted and challenging”, and claimed the mechanism is “not fit for purpose”. The Minister stated:

This is highlighted in the Minister’s recent final report on the implementation and operation of the financial powers devolved in the Wales Act 2014. The report also provides an update on the other potential areas for new taxes.

How the next Welsh Government can drive changes to this process, and the type of new taxes it could introduce, will play a significant role in tax policy over the next Senedd term.

What could a four-day week mean for Welsh workers and employers?