Radio in Wales: is community radio the answer?

The UK Government plans to deregulate certain aspects of commercial radio to enable it to compete better with digital and online-only services. The National Assembly’s Culture, Welsh Language and Communications Committee is looking at these proposals, and the knock-on effects they could have on the rest of the radio industry in Wales, during its radio inquiry.

What is the UK Government proposing?

In December 2017 the UK Government published its proposals for commercial radio deregulation. These included:

The next step is for the UK Government to bring forward legislation prior to the analogue licenses coming up for renewal in 2022. In the meantime, the Government has said it would support any moves by Ofcom to consider whether there is scope to make changes to its rules and guidance in lieu of longer-term reform. 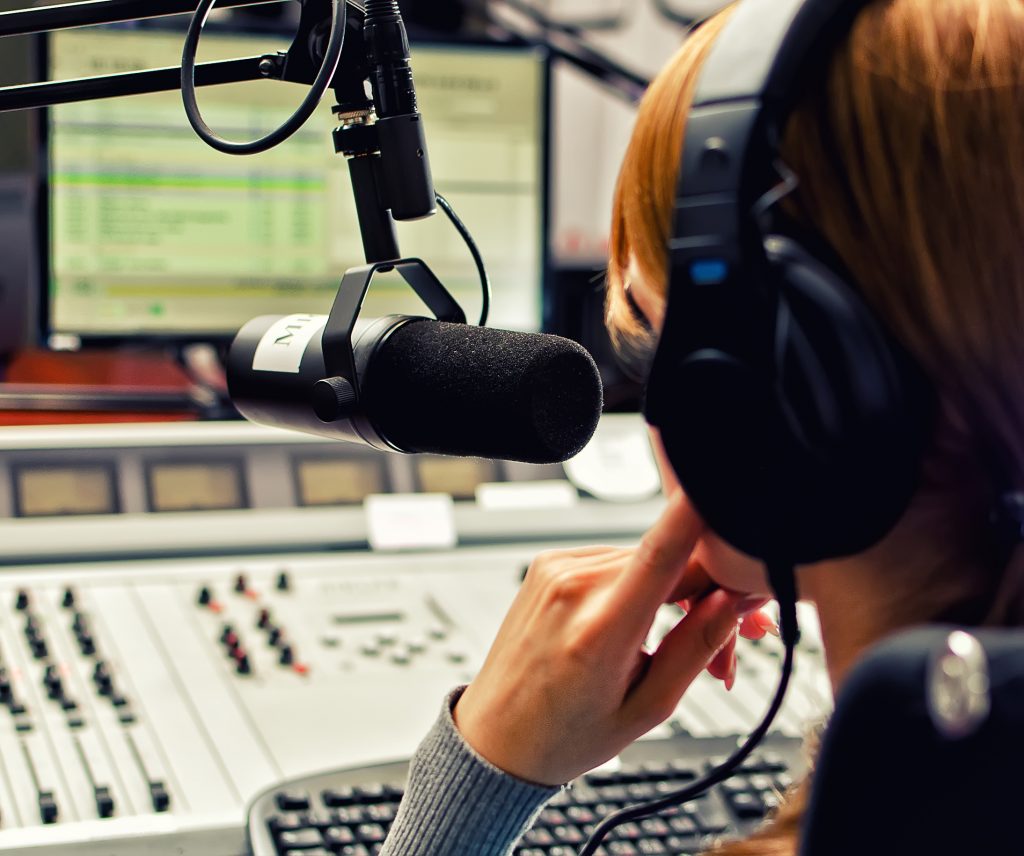 So far in the Committee’s inquiry, the Ofcom Advisory Board for Wales and Steve Johnson of University of South Wales have argued for the UK Government to introduce the regulatory concept of “all-Wales” news. Current regulation and the UK Government’s proposals cover local news and UK-wide news, omitting the mid-tier of constituent nations of the UK. The Ofcom Advisory Committee argued that commercial radio stations in Wales should be mandated to broadcast news about Wales, and that following devolution, “the provision of news is of a particular importance to civic life in Wales”.

Local commercial radio in Wales has the lowest commercial revenue per head of any of the UK nations, although between 2015 and 2016 this showed the highest year-on-year growth. 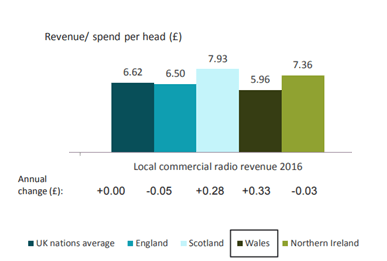 This low commercial revenue suggests – at least on this metric – that the business case for running a commercial radio station in Wales is more challenging than elsewhere in the UK. Would – as the UK Government has suggested – the introduction of an “all-Wales news” regulatory condition unhelpfully place commercial news operators in Wales at a further commercial disadvantage? Or is this intervention needed to strengthen the provision of news in Wales?

BBC radio: are network opt-outs for Wales “not possible”?

Although the BBC has three dedicated radio stations in Wales, Welsh audiences predominantly listen to UK services. 56% of all listening hours each week in Wales are of BBC services - with network services accounting for 48% - the highest of any UK nation.

The BBC’s Rhys Evans recently told the Committee told the Committee that, though this concept was “a valid one”, it was currently not possible for technical reasons. He explained that, when broadcast on FM, the signal targeting Wales also broadcasts to the south-west of England, meaning these audiences would also receive Wales news.

And on digital, he explained, “you can't opt out … It's one single frequency network across the UK on the Radio 1 and Radio 2 BBC multiplex”. Members of the Committee will test this explanation with the views of other witnesses as the inquiry progresses.

There are nine community radio stations on air in Wales. Community radio was introduced following legislation, in order to introduce a new tier of radio broadcasting in the UK, focused specifically on community engagement. Stations are not- for-profit, have limits on the revenue they can raise, and focus on delivering social gain: working to involve the local community in running the service.

The UK Government intends to remove requirements for local content for commercial radio licensing – other than for local news. Though the BBC provides national services in Wales, it does not provide more localised services, as it does in England. Does this mean that the community radio sector will soon be of particular importance in Wales?

The Committee heard similar arguments to this during its inquiry into news journalism in Wales: that the retreat of local newspapers from communities gave value to a new tier of “hyperlocal” publications – either online or in print - that had sprung up covering local community issues in their place.

The Welsh Government previously had a Community Radio Fund, which ran from 2008-2014 and distributed £100,000 a year. In the Committee’s most recent session, Steve Johnson (from University of South Wales) strongly advocated for the return of this funding, arguing that the benefits of community radio included “enabling participation, widening levels of media plurality and endeavouring to give a platform to marginalised, often unheard voices”.

The inquiry’s final session is on 26 April, when the Committee will hear from academics, the commercial radio sector, Radio Beca and the Minister for Culture, Tourism and Sport, Dafydd Elis-Thomas AM. The possible introduction of “all-Wales news” and the idea of resurrecting the Community Radio Fund are likely to be among the hot topics of debate.