In September 2017 the Economy, Infrastructure and Skills Committee published its report into Digital Infrastructure in Wales. During this inquiry, Members looked into the issues hampering broadband and mobile coverage in Wales, and what policies the Welsh Government should pursue to improve the situation. Since then, the Welsh Government has published its Mobile Action Plan, setting out how it wants to improve mobile coverage in Wales. Will this be enough to close the mobile coverage gap between Wales and the other UK nations?

What is the current situation?

The latest Ofcom data for broadband coverage (2016)[1] shows that, since 2014, coverage of superfast broadband services has increased at a faster rate in Wales than in any other UK nation: 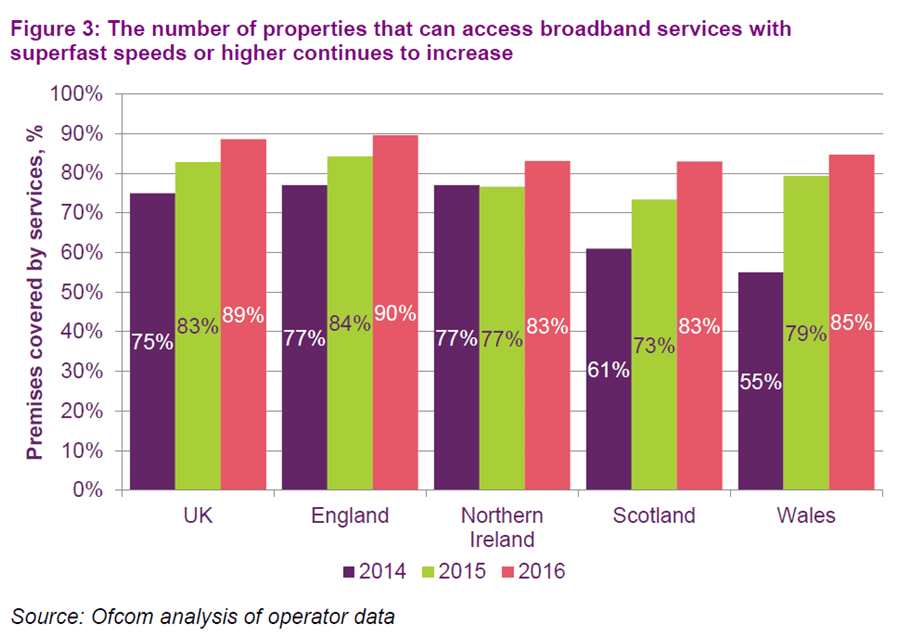 Although still less than the UK average, Wales has a slightly greater proportion of premises with access to superfast services than Scotland and Northern Ireland.

The increase in access has coincided with BT’s delivery of the Welsh Government’s Superfast Cymru project to roll out superfast broadband (i.e. at speeds of 30 Mbps or faster) to about 96 per cent of premises in Wales by June 2017. BT is delivering this scheme, using funding from the Welsh Government, the EU and the UK Government, alongside its own investment.

However, mobile availability in Wales – although it has improved greatly in recent years - remains the lowest in the UK: Summary of outdoor mobile coverage for all four operators in the UK

Wales has the lowest proportion of premises with mobile coverage of all nations in the UK, and for all generations of mobile technology.

What is the Welsh Government doing about it?

Regulation of telecommunications is reserved to the UK Government. The Welsh Government is therefore limited to using policy tools at its disposal – such as planning policy, business rates and providing grants.

The Superfast Cymru deadline was June 2017, with the expectation from the Welsh Government that BT would have connected enough premises in Wales for about 96% to have access to superfast broadband. This scheme is only active in areas where commercial roll-out of broadband had not taken place, and was not expected to happen in the foreseeable future. BT then had a 6-month window to finish off any outstanding work before the contract’s “drop-dead date” of 31 December 2017.

The Welsh Government is developing a successor scheme to take superfast broadband to those premises that will not be included in either the Superfast Cymru project or commercial roll-out. A Welsh Government open-market review has identified 98,000 properties as potentially being within the scope of this successor scheme. An interactive map showing premises expected to be without superfast broadband in the next three years, can be found here. The then Minister (Julie James AM was Minister with responsibility for digital infrastructure – she retains this responsibility in her new role as Leader of the House and Chief Whip) has said that “the successor scheme will be underpinned by a public sector budget of up to £80 million which in turn, will leverage private sector match funding”.

Access Broadband Cymru is the Welsh Government’s grant scheme that offers up to £800 per premises that are unable to receive fast broadband. The proposed new service must ensure a minimum download speed of 10Mbps, and at least double the current speed.

The Ultrafast Connectivity Voucher scheme is the Welsh Government’s grant scheme that offers up to £10,000 to fund (or part-fund) the installation costs of new ultrafast connections.

Will this close the gap?

In terms of digital terrestrial television, in Wales we have 67 masts per million of the population. The number in England is 12. So it’s a huge difference. That doesn’t give you parity with England. That still only gets you, in television terms, to 97.7 compared to 98.7 in England […] For mobile, and especially for mobile data services, the density of masts that is required is substantially more.

This analysis implies that – if the goal is just to achieve parity with England in terms of mobile coverage – the range of incentives for mobile network operators to deploy infrastructure must be greater in Wales than England, to compensate for the lack of commercial incentive to build in Wales. Alternatively, the UK Government would have to compel increased deployment in Wales, for example by attaching further conditions to mobile spectrum auctioned by the communications regulator Ofcom.

The Welsh Government has signalled its intention to use planning policy, business rates and perhaps even grants to incentivise mobile roll-out in Wales: whether this activity is sufficient to close the gap with England and the other UK nations remains to be seen.