Plastic-free July – what is Wales doing to curb plastic pollution?

It’s plastic-free July, and as awareness of plastic pollution grows across Wales, communities, from villages to counties, are declaring their plastic-free pledges.

Plastics are versatile, useful, and durable components of our everyday life. However, it’s this durability that means they can have a significant negative environmental impact. Research shows that globally less than a fifth of all plastic is recycled. It’s estimated that if current practices continue around 12bn tonnes of plastic waste will be in landfill or the environment by 2050.

In 2017, the BBC series Blue Planet II gave viewers a stark look at how plastic pollution was affecting aquatic environments and the animals living in them. The presenter, Sir David Attenborough, spread the message further in June by congratulating the Glastonbury Festival, the largest greenfield festival in the world:

…this great festival has gone plastic-free. That is more than a million bottles of water that have not been drunk by you at Glastonbury. Thank you. Thank you.

Recently, the BBC series War on Plastic with Hugh and Anita, looked into the amount of plastic we use and produce, and where it ends up once we dispose of it. This investigation found that plastic recycled in Rhondda Cynon Taf had made its way to a wasteland in Malaysia.

On World Environment Day (5 June), the marine conservation charity, Surfers Against Sewage (SAS), protested outside of the UK Parliament with a 15ft ‘creature’, calling on MPs to sign the #GenerationSea pledge to:

…support the fight to stop plastic pollution, act fast to tackle the climate crisis, stop sewage from being let back into the sea and to fully protect areas for sea life to flourish.

The publication of large-scale reports, airing of programmes that expose the issues and awareness campaigns at a global and national level, have galvanised the Welsh Government and communities across Wales into action.

From February to May 2019, the Department for Environment, Food and Rural Affairs (Defra) and HM Treasury consulted on joint proposals aimed at reducing plastic waste. The proposals included Defra’s Extended Producer Responsibility (EPR) for packaging and a Deposit Return Scheme (DRS) (both applying to Wales), and HM Treasury’s tax on the production and important of plastic packaging. The consultation responses are due to be published soon.

A circular economy keeps resources in use as long as possible by recovering and regenerating materials at the end of their life instead of disposing of them.

The introduction of these measures was discussed in a report on plastic pollution published in June 2019 by the Climate Change, Environment and Rural Affairs Committee. The Committee welcomed the Welsh Government’s involvement in the joint consultations, but stated:

…the Welsh Government must be ready to take a lead and, if necessary, act alone.

In May 2019, the UK Government announced it would be banning the supply of plastic straws, drinks stirrers and cotton buds in England from April 2020 (with some exemptions). This followed a consultation in which the majority of respondents supported a ban.

In 2017, the Welsh Government and a range of stakeholders developed the first Marine Litter Action Plan for Wales (2018-2020). Wales joined the United Nations #CleanSeas campaign and set up the Wales Clean Seas Partnership, to mobilise and coordinate action across Wales. The Partnership includes organisations such as Keep Wales Tidy Cymru, WWF Cymru, SAS Cymru and Cardiff University. 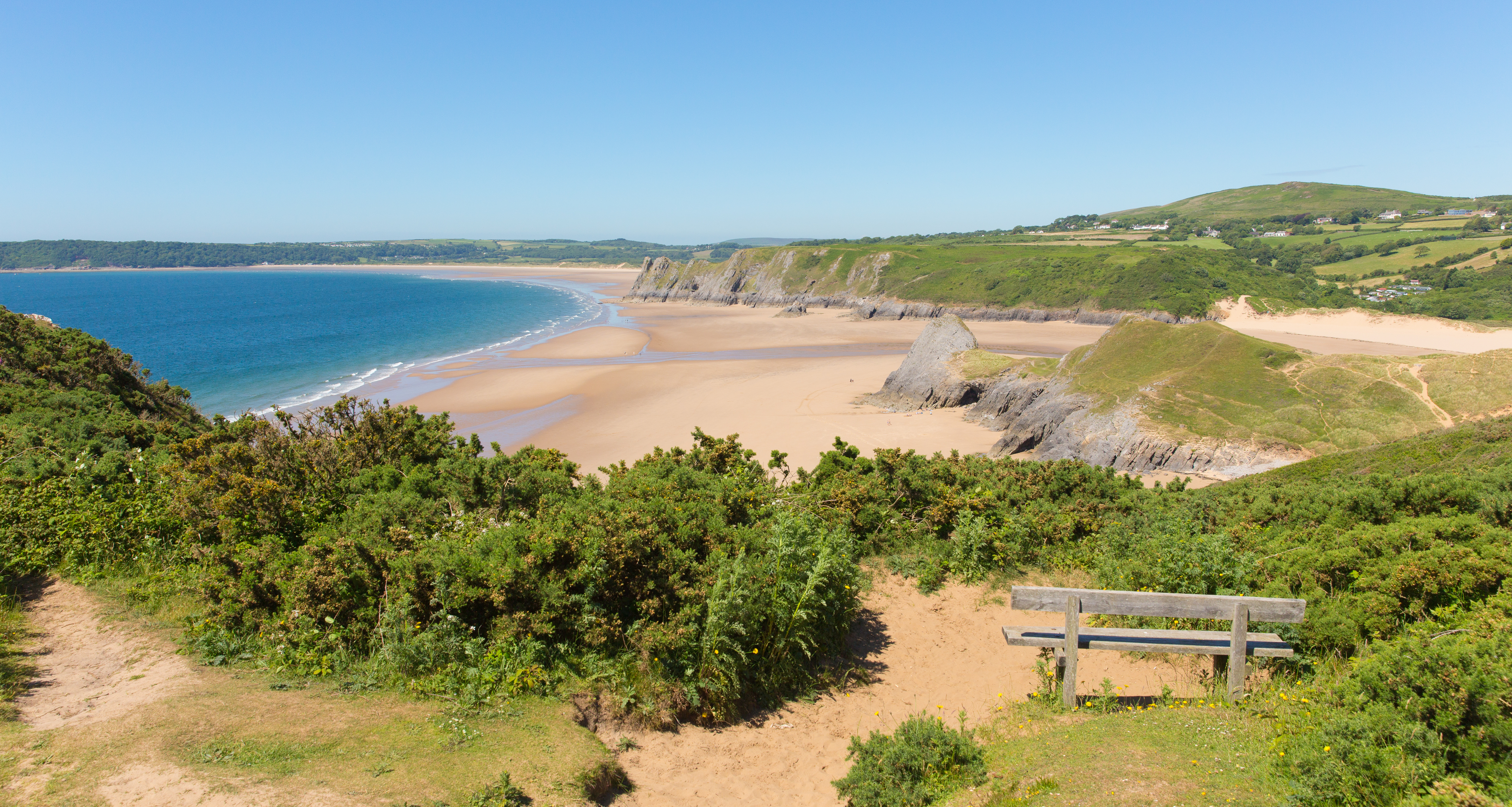 The marine area in Wales is larger than its land area, and over 60% of the population live and work on the coast. Many of these communities are rallying together as part of SAS’s Plastic Free Coastlines campaign, by becoming ‘plastic-free’ or running one of its Beach Cleans.

In 2017, film maker Gail Tudor began campaigning for a ‘Plastic Free Aberporth’, which saw local shops, pubs and businesses replacing their single use plastic items with more sustainable alternatives, such as glass milk bottles and paper drinking straws. Shortly after this, Aberporth went on to be awarded the title of first plastic-free community in Wales by SAS. Following this, the race to be the first major town in Wales to be plastic-free saw Aberystwyth triumph.

An 18-month campaign led by activist Sian Sykes on Anglesey led to its success in becoming the first plastic-free county in the UK. Sian Sykes undertook the first ever circumnavigation of Wales by paddleboard, carrying only sustainable items, to highlight the problem of plastic pollution, ensuring she collected plastic waste on the way.

Sports clubs have also taken up the challenge to go plastic-free. Uplands RFC was the first plastic-free sports club in Wales recognised by Friends of the Earth Cymru for replacing its plastic pint glasses, coffee cups, cutlery, food packaging and straws.

It hasn’t always been plain sailing for the plastic-free communities, as many local residents and businesses have highlighted how making the switch to sustainable items can be much more expensive and less convenient. Local Aberporth shop owner, Mike Allen stated ‘I can't find anyone who can sell me biscuits or sandwiches without plastic’, whereas Oliver Box, of The Ship pub in Aberporth said:

One thousand plastic straws cost just £1, while the same number of paper straws is £10. We are putting a jar on the bar where we hope customers will contribute in a small way to what we are trying to do.

Some have criticised the removal of certain single plastic items. Cardiff University explain (see the ‘Unintended consequences’ section), for example, that plastic straws can be essential for the everyday life of some disabled people, and plastic medical supplies allow hygienic practice, and have led to huge advances in medicine. Other criticisms include the higher carbon costs of transporting liquids in glass instead of plastic, and the potential use of toxic dyes for natural materials, such as cotton and wool, when replacing synthetic materials.

Other initiatives across Wales

Wales has often been a front-runner in tackling environmental issues, for example being the first UK nation to introduce the 5p plastic bag charge, and having the first parliament to declare a climate emergency.

The Welsh Government is aiming to be zero-waste by 2050. This means all waste will be recycled and none will go to landfill. The number of zero-waste shops are increasing across Wales. These aim to be packaging-free or use little, or sustainable, packaging and allow customers to refill their own containers and buy smaller portions of food. In 2018, the supermarket chain Iceland (the largest company in Wales by turnover) hoped to be the first major global retailer to eliminate plastic packaging from all of its own-brand products by the end of 2023. Iceland consulted with Greenpeace on the plans and confirmed it supports the bottle DRS.

It is estimated that a million plastic bottles are bought around the world every minute. In 2018, the Welsh Government announced it would be promoting free drinking water at refill stations around Wales. This year, National Refill Day saw First Minister, Rt Hon Mark Drakeford AM, unveiling new refill taps at Cardiff Airport, in hopes it will cut down on the use of disposable plastic bottles. Monmouthshire County Council are also part of the ‘Refill Revolution’, having registered many of its council buildings as refill stations. There are now over 1,100 organisations offering free water refills around Wales.