Next level or restart the mission? The Levelling Up White Paper and Wales

We have heard much about the UK Government’s ambition to level up different parts of the UK, but less about how it will be achieved until recently. Earlier this month the UK Government published its Levelling Up White Paper, setting out the next stages in its plans to address place-based inequalities.

What are the key regional inequalities the UK Government is looking to solve?

The UK has long-term, entrenched inequalities between places in relation to the economy, education, skills, health and housing. On economic indicators such as productivity and income per head, the UK Government notes that the UK has greater inequalities than many comparable nations.

Looking at key metrics the UK Government has used in its White Paper, Wales performs below the UK average in relation to productivity, earnings, skills and healthy life expectancy. However, there is considerable variation between different parts of Wales, with Valleys and rural areas most likely to be considered ‘left behind’ in the UK Government’s analysis.

Figure 1: Productivity per hour worked as a percentage of UK average, 2019 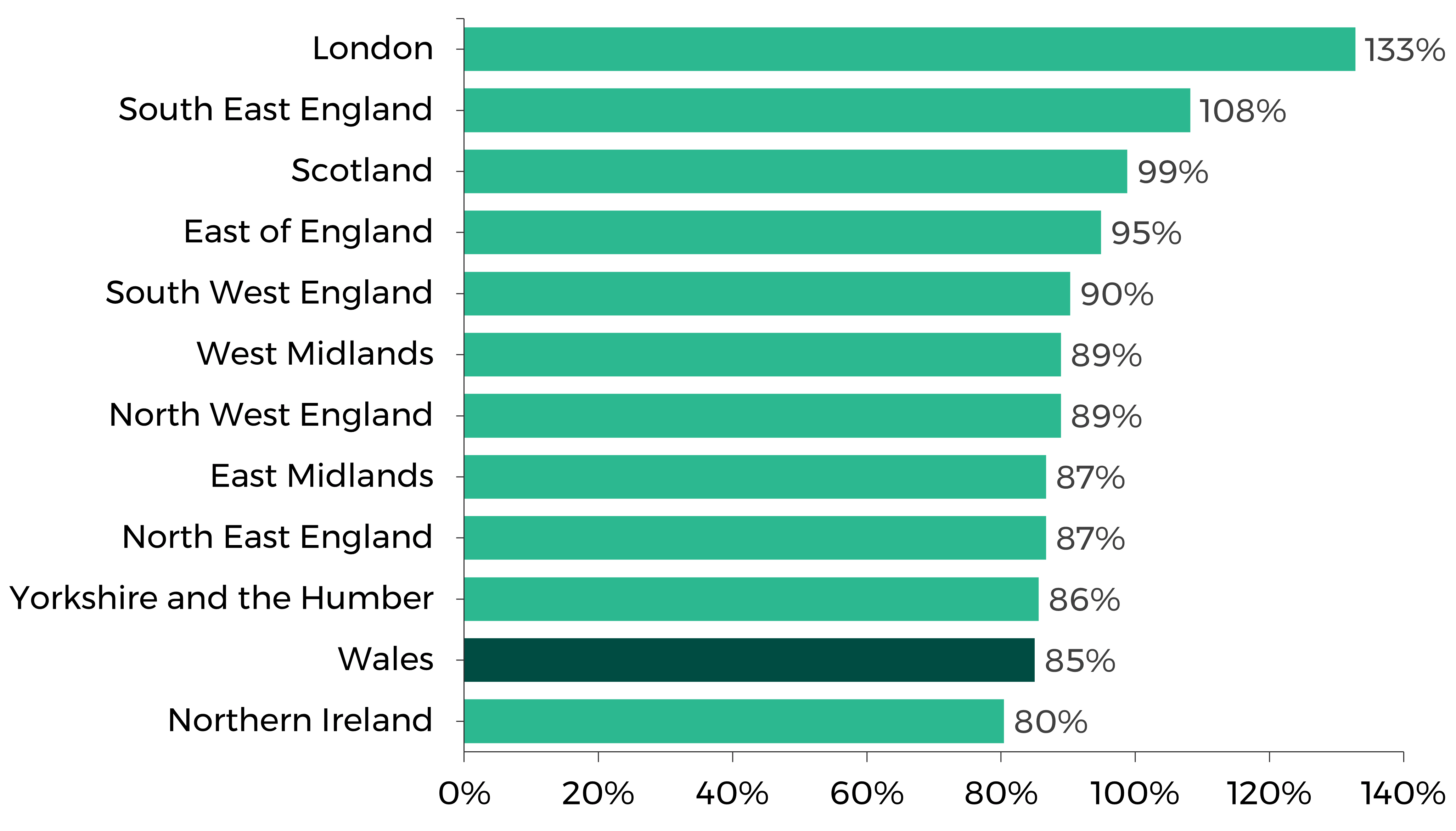 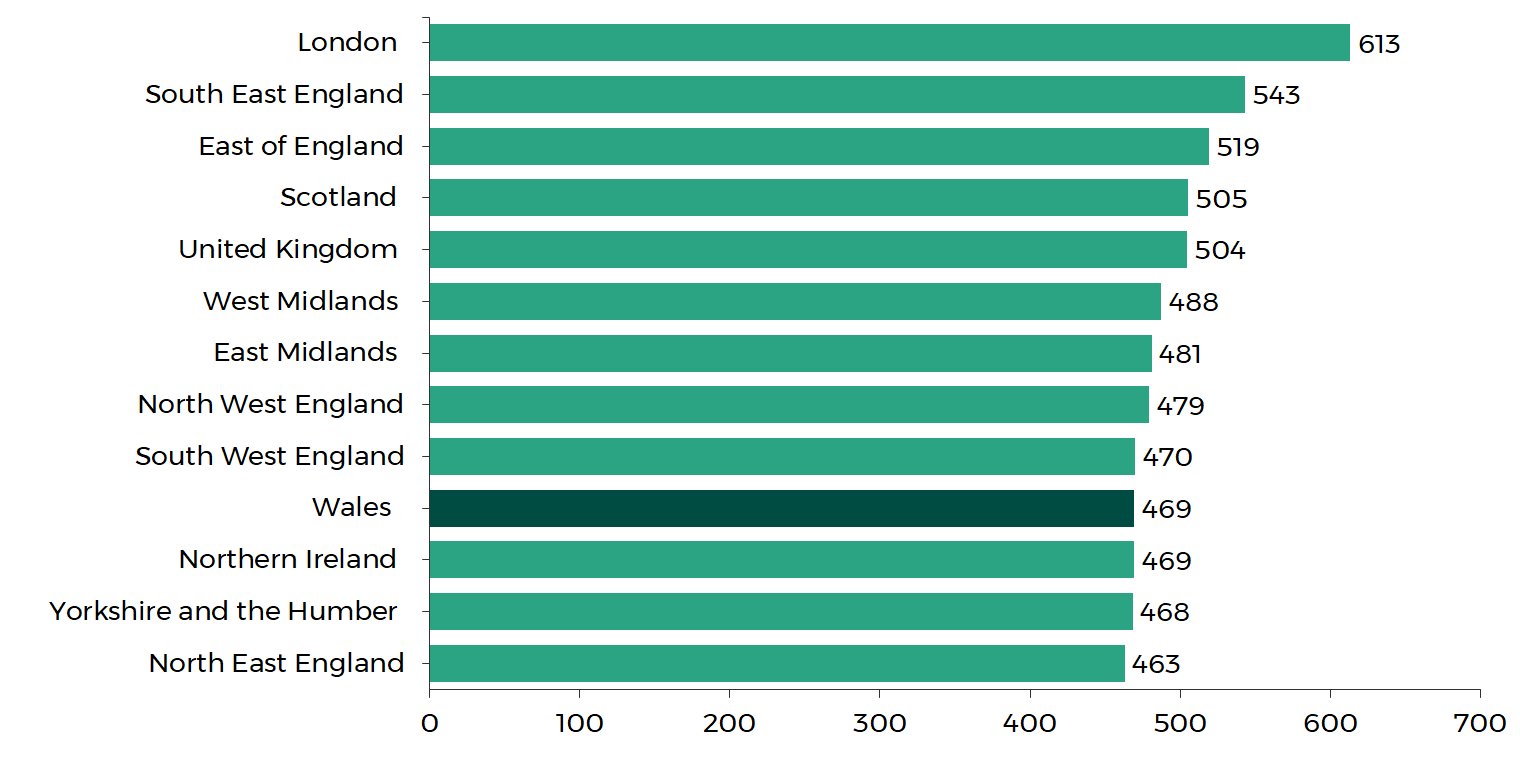 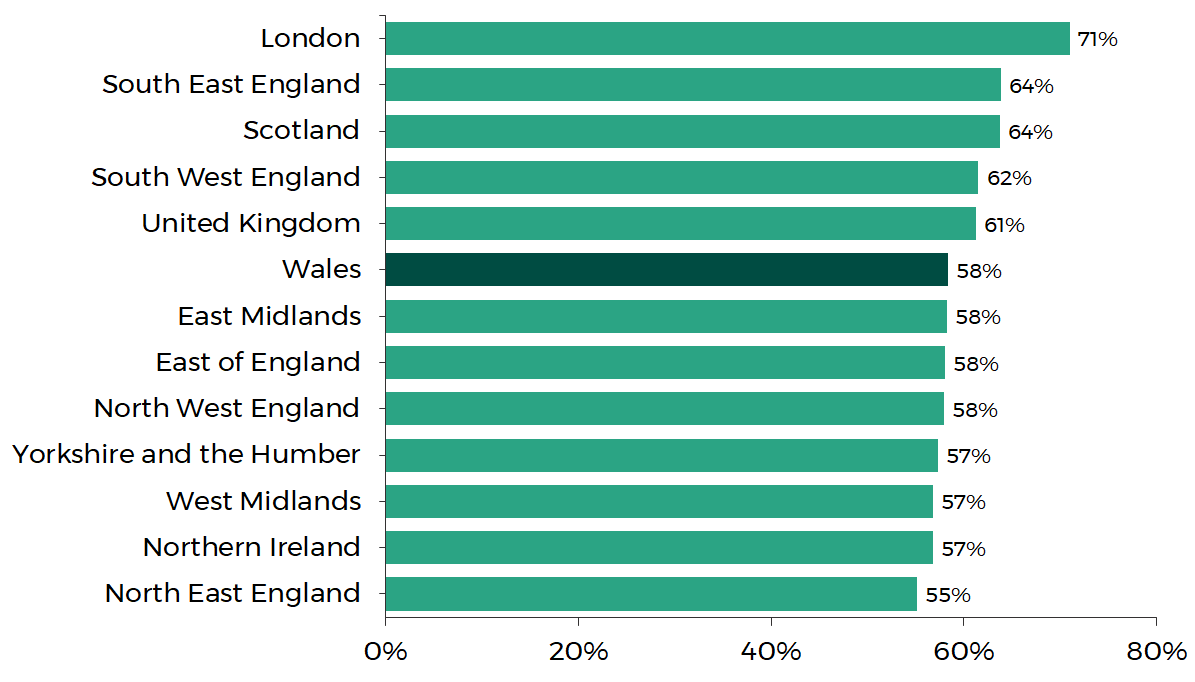 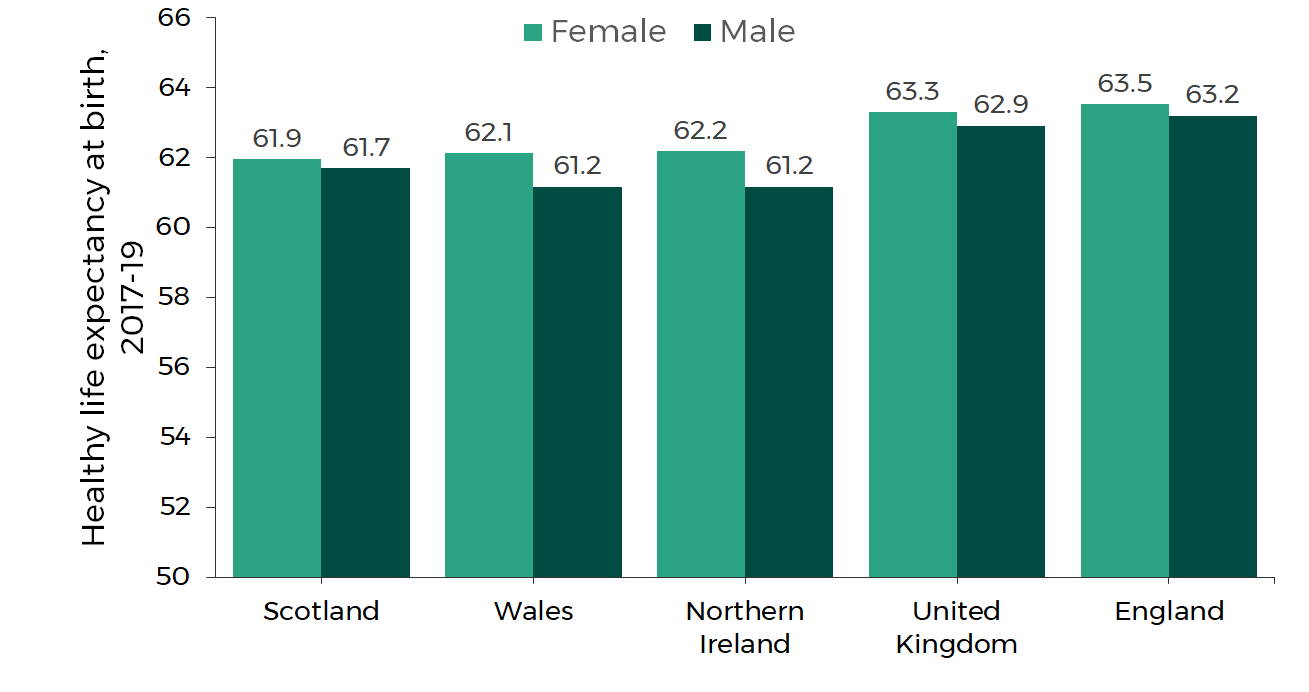 Figure 5: Which areas of Wales are most ‘left behind’ using the UK Government’s key metrics? 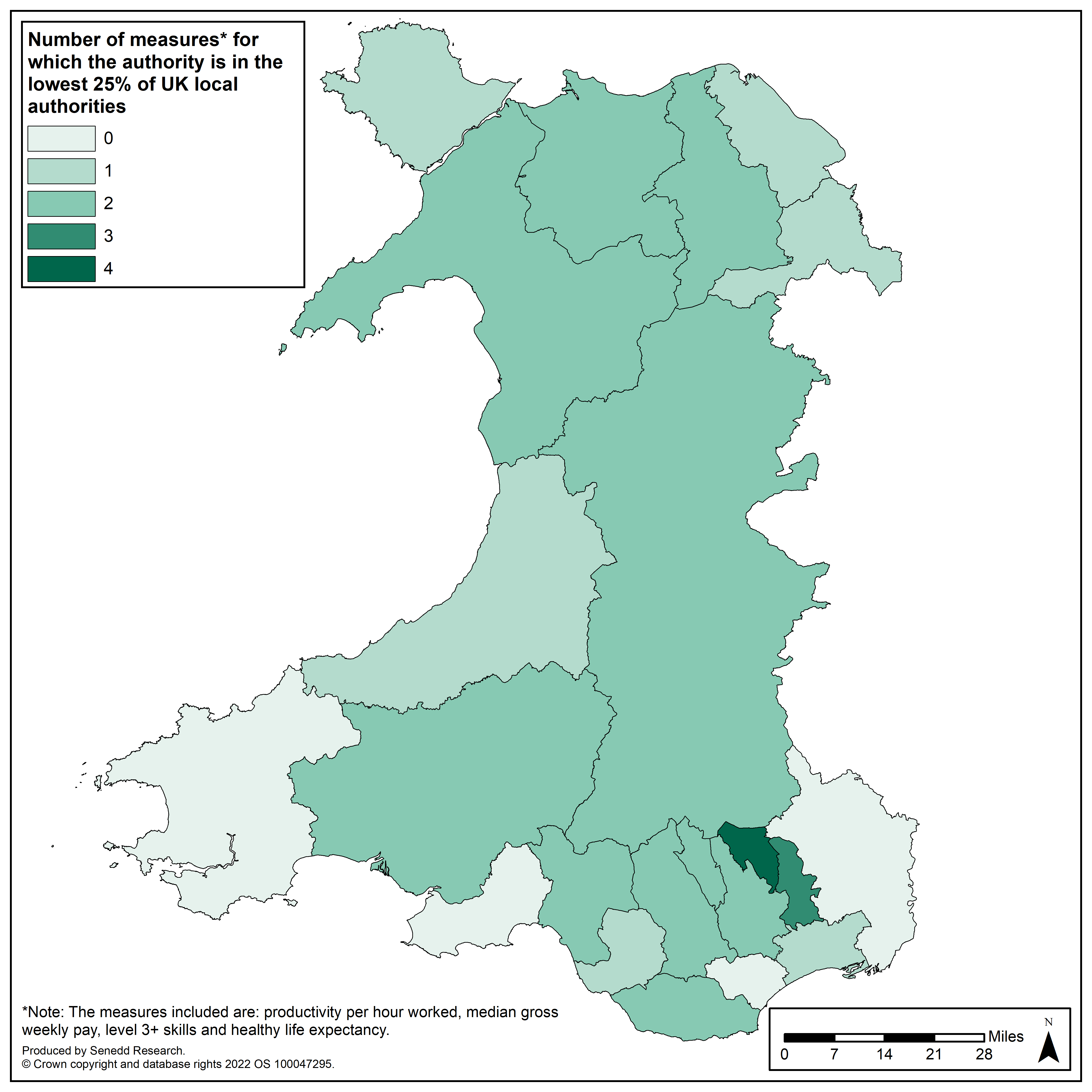 How is the UK Government proposing to level up, and how do its proposals interact with the devolution settlement?

The UK Government has said that levelling up will need to be “broad, deep and long-term”. The White Paper sets out four ways the UK Government will aim to level up the UK:

The White Paper covers some non-devolved areas where the UK Government will act in Wales, such as crime and broadband, and areas where the UK and Welsh Governments both have responsibilities, such as public transport and research and development. The UK Government’s plans are for England-only in relation to a number of devolved areas, such as health, housing and education, and it is up to the Welsh Government how it addresses challenges in these areas. The Secretary of State for Levelling Up, Communities and Housing has written to the First Minister seeking to work with the Welsh Government to “overcome shared challenges”. The First Minister has said that the White Paper is a “very thin document” without a strategic plan, and without the necessary funding to achieve its aims.

Perhaps the most politically controversial aspect of the proposals is that the UK Government is using its recently acquired powers to spend money on devolved areas across the UK, through local/regional development initiatives such as the Levelling Up Fund and Shared Prosperity Fund. The UK Government argues that its approach will strengthen the support provided by devolved administrations. In contrast, Wales’ Minister for Economy has stated that “the unconstitutional Internal Market Act is being used to override democratic devolution by stopping decisions about Wales being taken in Wales”.

What do we know about the upcoming Shared Prosperity Fund?

The Conservative manifesto for the 2019 UK General Election stated that it would tackle inequality and deprivation across the UK by developing a Shared Prosperity Fund to replace EU Structural Funds. The UK Government has recently released pre-launch guidance on the Shared Prosperity Fund. While this gives some clarity on the UK Government’s intentions, a number of questions remain to be answered.

The UK Government has said that it will have the lead role in implementing the fund across the UK, but that it will discuss the role of devolved administrations. The fund will see a number of changes from its Community Renewal Fund pilot.

Rather than areas competitively bidding for funding, each area of the UK will be allocated funding and will need to have an investment plan approved by the UK Government to access this. We don’t know yet how much Wales or individual local authorities will receive, or the methodology being used to determine how much areas will receive.

One of the Welsh Government’s concerns is that the approach piloted with the Community Renewal Fund was a “much more localised and atomised approach” that did not learn lessons from the 2000-06 round of Structural Funds in Wales which saw too many projects without enough strategic and regional focus. The UK Government guidance states that Welsh local authorities will be invited to collaborate to develop proposals across City and Growth Deal areas.

The UK Government has said that the Shared Prosperity Fund would “at a minimum” match the amount of Structural Funds received in each nation. However, the Welsh Government has said that Wales will lose £750 million between 2021-22 and 2023-24 as a result of the Shared Prosperity Fund not fully replacing Structural Funds until 2024-25, although this is disputed by the UK Government.

What are the challenges involved in levelling up, and how likely are the UK Government’s proposals to achieve its objectives?

While many organisations welcomed the publication of the White Paper, they also raised challenges that the UK Government faces in delivering on its aims. The Onward think tank, for whom the current UK Minister for Levelling Up, The Union and Constitution wrote a report on levelling up last year, says that the key challenge is delivery, and how the ambitions translate to action beyond central government.

The Institute for Fiscal Studies suggested that the main challenge the UK Government faces in delivering on its plans is ensuring sufficient funding and focus on policy and reform. Without these, it says “there is a risk that the government has chosen its destination with no sense of how it plans to get there”.

The Institute of Welsh Affairs said that the White Paper’s approach threatens to weaken democratic accountability and economic development in Wales. It calls for the Welsh and UK Governments to set up a co-ordinating body to administer allocations from the Levelling Up Fund and Shared Prosperity Fund in Wales.

The National Audit Office found that the UK Government has not evaluated the impacts of its past policies for local economic growth, although it is starting to do so now, and has “wasted opportunities to learn which initiatives and interventions are most effective”. These factors mean that the NAO has reduced confidence that the current schemes will deliver value for money.

It's clear that levelling up will require a long-term approach to tackle entrenched inequalities between and within places across Wales and the UK. The extent to which the UK Government’s approach will successfully address the challenges many people and communities across Wales face, and how it will interact with Welsh Government policy in devolved areas, remains to be seen.