This paper has been updated to summarise the outcome of scrutiny at Stage 1, changes made to the Bill at Stage 2 and the undertakings given by the then Minister for Lifelong Learning and Welsh Language ahead of Stage 3 proceedings.

The Bill makes provision for universal, statutory Individual Development Plans for all children and young people with ALN. This would bring an end to the current distinction between school-led interventions and local authority issued statements and integrate the separate legislative arrangements that exist for pupils in schools and post-16 students in colleges. The Bill also seeks to improve collaboration between local authorities and health boards, as well as establishing a fairer and more transparent system with greater emphasis on disagreement avoidance and dispute resolution.

116 amendments were agreed, which made changes to the Bill. An updated version of the Bill, as amended at Stage 2 (PDF 381KB), has been published.

The then Minister for Lifelong Learning and Welsh Language, Alun Davies made ten commitments to be addressed at Stage 3. Details of these as well as the changes made to the Bill at Stage 2 are set out in chapter 11 of this paper.

Details of amendments already tabled at Stage 3 are available on the Bill webpage. Assembly Members have until 6.00pm on Tuesday 14 November 2017 to table amendments.

Stage 3 amendments are scheduled to be debated and voted on in Plenary on Tuesday 21 November 2017. 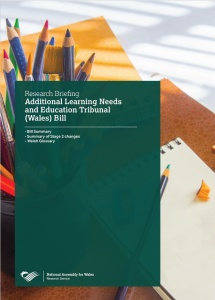 ‘Let’s Connect’: why our children are lonely and how we can support them