Is Wales on track to become a ‘world leader for gender equality’?

In 2018 the Welsh Government made a bold commitment to become a ‘feminist government’. The vision and principles (PDF, 775KB) for this aim emphasise the “equal sharing of power, resource and influence for all women, men and non-binary people”.

The World Economic Forum estimates that it will take nearly 100 years to close the global gender gap at the current rate of progress. The UK is 21st out of 153 countries in the gender gap rankings, falling six places from the previous year.

But given the Welsh Government’s commitment (PDF, 199KB) to being a ‘world leader’ on the issue, are gender gaps closing in Wales? Each year, we publish indicators to assess whether inequalities between women and men in Wales are decreasing or increasing.

Women are well represented in the leadership of the Welsh Government and Assembly, but less so in local government

The Assembly has maintained consistently high levels of women AMs since devolution, and currently 47% of Assembly Members are women. The Welsh Government Cabinet matches this, with over 50% of roles filled by women.

The number of women council leaders rose, from 18% of councils to 23% in the last year. But only 28% of councillors elected in 2017 were women, and currently 32% of council Cabinet members, according to Chwarae Teg research (PDF, 312KB). 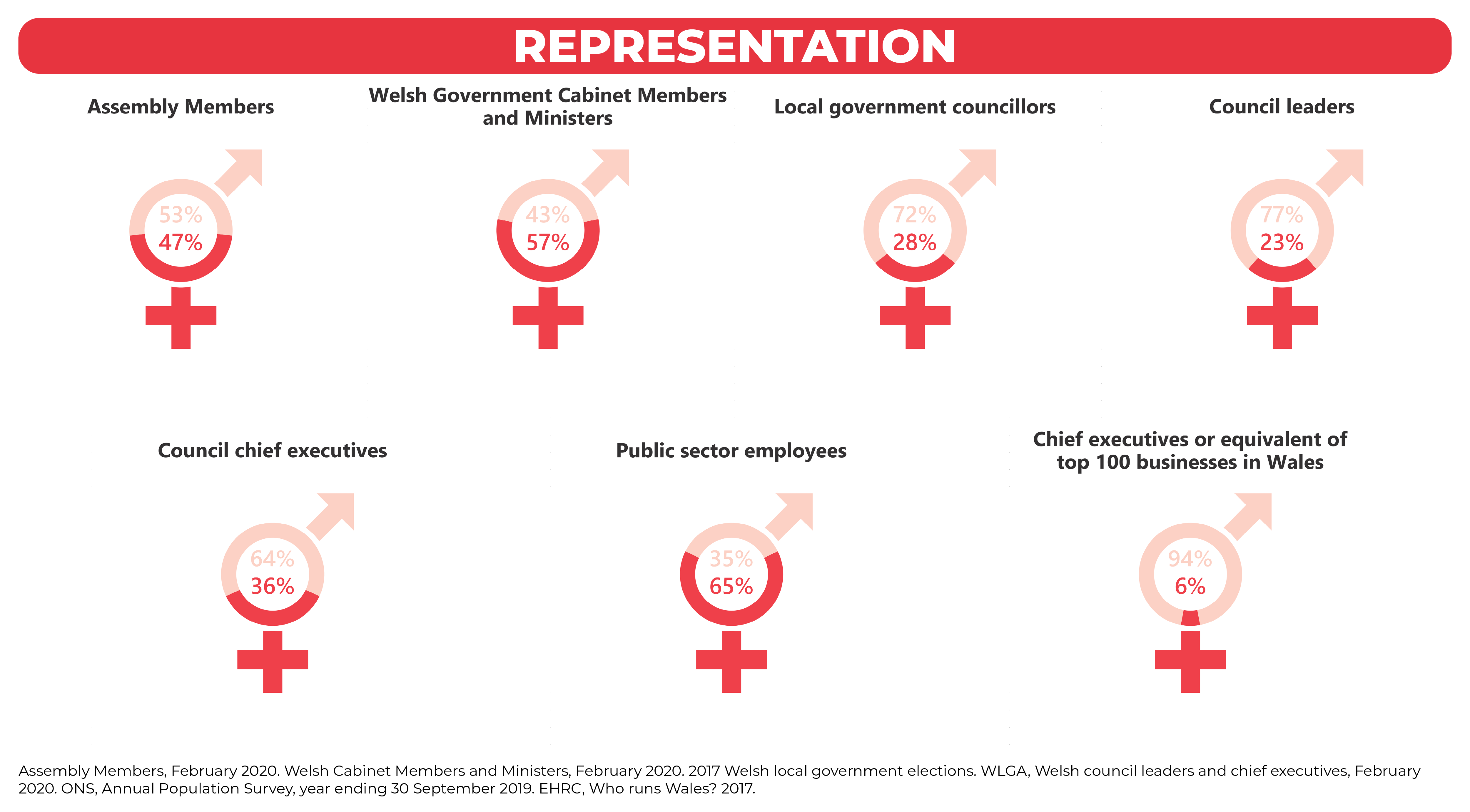 The World Economic Forum observes that:

“In contrast to [..] positive progress in the lofty world of leadership, women’s participation in the wider labour market has stalled and financial disparities are increasing.”

Women in Wales are still more likely to work part-time, and there was no narrowing of the gaps between men and women in self-employment and entrepreneurship over the past year.

The indicators also show that the gender pay gap has widened very slightly one measure. The gap between all male and female workers (both full and part time) is now £1.90 per hour, compared to £1.65 last year. However, the gender pay gap narrowed slightly for full time workers.

The gap between economic activity rates of men and women changed very little between 2018 and 2019. 73% of women and 81% of men were economically active in the year ending September 2019. 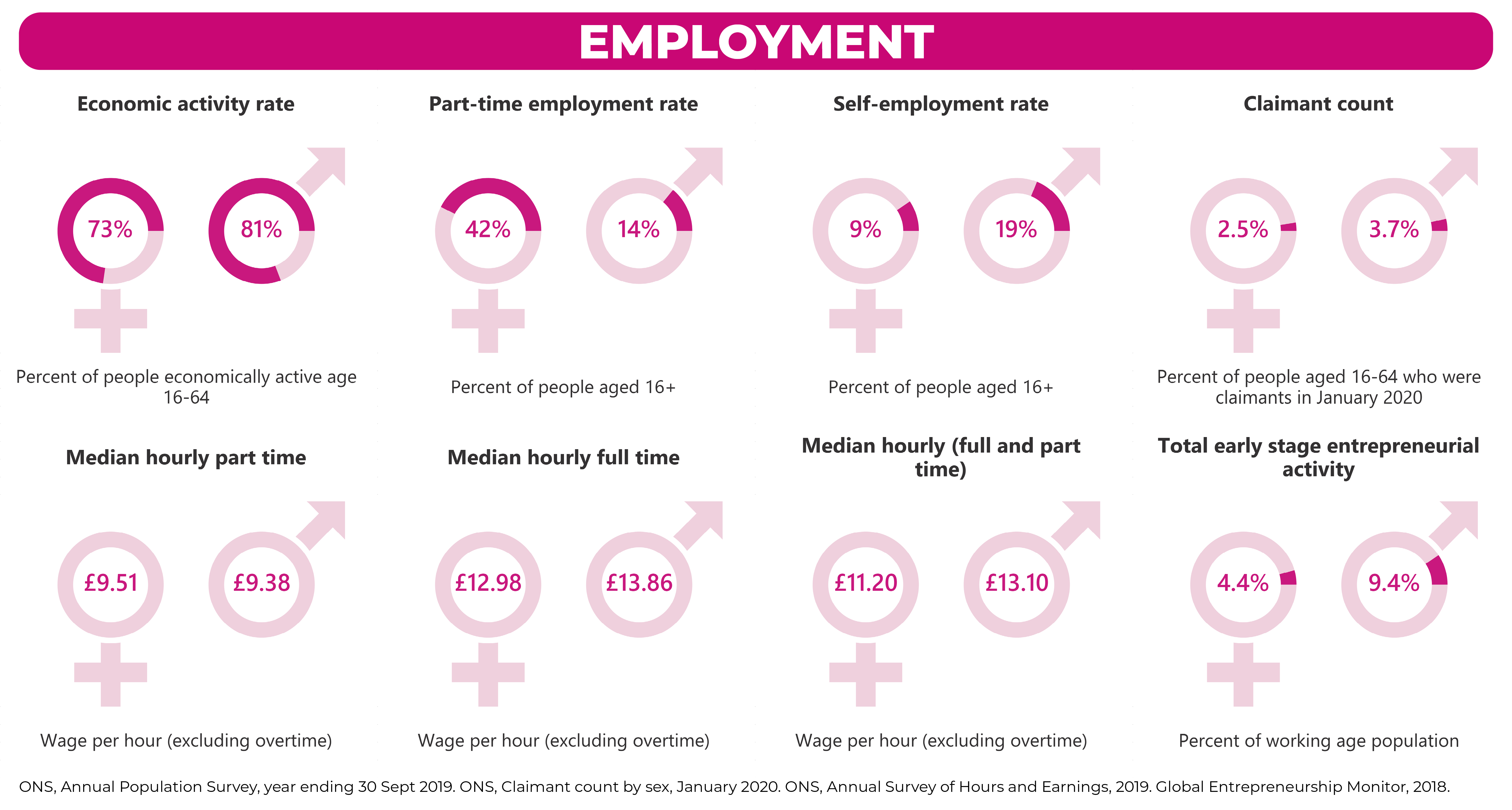 As highlighted by Chwarae Teg’s State of the Nation 2020 report (PDF, 312KB), the gender gap in economic activity widens after the age of 25-34. Rates for women and men are nearly equal for those aged 16-19 but grow after this, with the widest gap between men and women age 25-34.

The main reasons for economic inactivity are different for men and women. Of those people who are economically inactive, 33% of men and 26% of women are inactive because of long-term sickness, 32% of men and 21% of women because of studying, and 28% of women and 7% of men due to looking after a family/home.

The Chwarae Teg report also shows that in 2018-19 the proportion of ethnic minority women in employment was much lower than for white women (55% compared to 71%), but this gap narrowed compared to the previous year.

Women are less likely to work in emerging sectors

The WEF says that:

“women have greater representation in roles that are being automated; not enough women are entering professions where wage growth is the most pronounced (most obviously, but not exclusively, technology), and women face the perennial problem of insufficient care infrastructure and access to capital.”

According to the Annual Population Survey for the year ending March 2019, 81% of science, research, engineering and technology professionals in Wales are men, whereas 85% of personal care jobs are filled by women.

A 2017 Welsh Government report (PDF, 773KB) found that there is a high demand for STEM (science, technology, engineering and maths) roles in Wales, which pay 20% more than other sectors on average.

Gendered experiences of poverty are often hidden by headline statistics

The rates of poverty for women and men of working age in the UK show that in 2017-18, 20% of women lived in low income households compared with 18% of men. There is no equivalent data for Wales.

Chwarae Teg and the Bevan Foundation published research on women in poverty in December 2019, which found differences in poverty levels between men and women who are single, particularly single parents:

There is a difference between the genders amongst single people: single women without children have a higher risk of being in poverty than single men (32 per cent compared with 28 per cent).

Single parents, the vast majority of whom are women, are even more likely to live in poverty, with 44 per cent living below the poverty threshold. Assuming that household income is equally shared, being in a couple significantly reduces the risk of poverty for women, roughly halving it.”

The research also showed that “relative low income only measures part of women’s experiences – women are more likely to experience material deprivation and typically have fewer assets and more debts”.

In 2018-19, 63% of applicants to local authorities for help because they are threatened with homelessness were female, out of around 10,700 people. A third of all applicants were lone parent families.

But the situation was reversed for households assessed as ‘homeless’ where the applicant was male in 55% of cases. While sex-disaggregated rough sleeping statistics in Wales are not available, research for England shows that men are much more likely to sleep rough.

More women in Wales are killed by partners or family members (known as ‘domestic homicide’) than in previous years.

Men are much more likely to be victims of non-domestic homicide (34 men compared with 5 women), which is a slight increase from 33 men and 4 women in 2012-15. The proportion of women aged 16-59 who reported experiencing any form of domestic abuse in the past year fell to 7%, from 8.7%. The proportion of men also dropped to 4.8% from 6.0%. 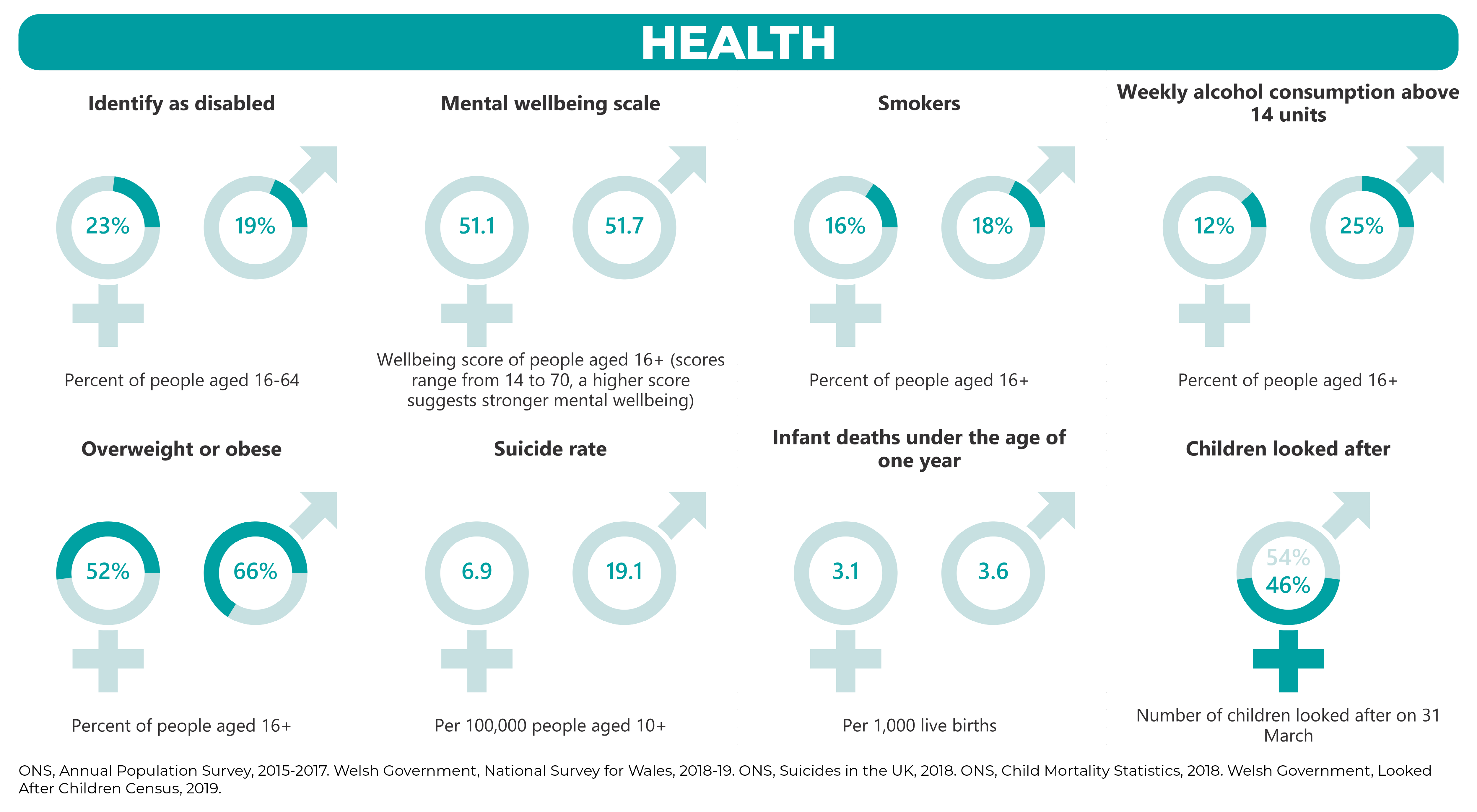 Males are expected to live four years less than females (at birth), and are more likely to be overweight or obese, smoke, and drink more than 14 units of alcohol a week.

Girls are more likely to achieve five A*-Cs at GCSE (including Maths and first language English or Welsh), be enrolled on undergraduate courses and apprenticeship programmes. Boys aged 16-18 and 19-24 are still slightly more likely to be NEET (not in education, employment or training). 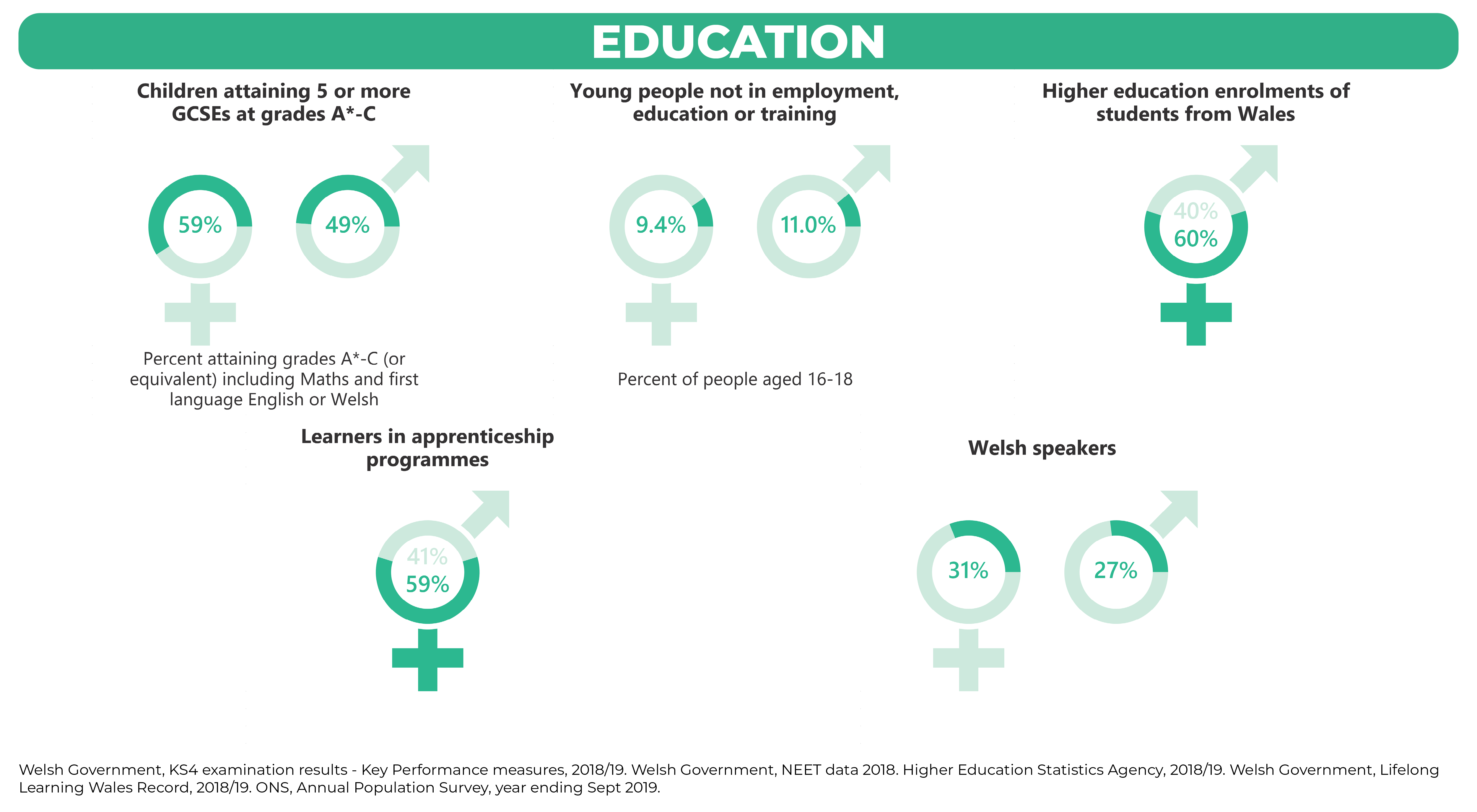 Phase one of the review was published in 2018 alongside research from the Wales Centre for Public Policy exploring international good practice. The report made a range of recommendations, a selection of which were explored in more detail in our 2018 gender article.

The phase two report was published in June 2019, alongside a road map (PDF, 627KB) for gender equality in Wales, and a paper on assessing impact (PDF, 744KB). It was also accompanied by research by Dr Alison Parken on aligning well-being and equality outcomes (PDF, 884KB), and an equality mainstreaming policy development model (PDF, 446KB).

In November 2019 the Deputy Minister and Chief Whip, Jane Hutt AM, said that in response to the review, “officials are now engaged in developing our ImplementationPlan” to “not only ensure that we are able to monitor and review progress but will also allow us to maintain focus and momentum”.

The Women’s Equality Network (WEN) Wales and Oxfam Cymru published a ‘feminist scorecard’ (PDF, 315KB) in 2019 to assess the Welsh Government’s progress towards becoming a feminist government, and included a range of recommendations.

Assembly Committees have also made recommendations relating to gender, including (among others):

Closing deeply entrenched economic, social and cultural gender gaps in Wales requires long-term and sustained commitment. The Welsh Government’s forthcoming implementation plan for the gender review, and its new strategic equality plan for 2020-2024 (the final version of which will be published in March) will be key to understanding how it intends to increase equality between men and women in practice.

A note on the data: We update the indicators each year with the most up to date evidence available. Some datasets are not comparable year to year, and other indicators are new. Intersectional data that covers age, ethnicity, disability and other characteristics alongside gender is included where it is available.