"Countries with more gender equality have better economic growth. Companies with more women leaders perform better. Peace agreements that include women are more durable. Parliaments with more women enact more legislation on key social issues such as health, education, anti-discrimination and child support. The evidence is clear: equality for women means progress for all." UN Secretary-General Ban Ki-moon  The theme of International Women’s Day 2014 is ‘Inspiring Change’, which is intended to celebrate “the social, political and economic achievements of women, while focusing world attention on areas requiring further action”. With recent reports highlighting the lack of improvement in the representation of women in Wales, what is happening in Wales to ensure the progress of gender equality? 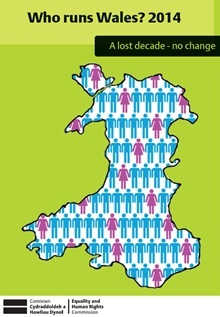 The Equality and Human Rights Commission’s paper Who Runs Wales? 2014 notes that:

However, there are currently a number of campaigns and projects to increase the representation of women in public life in Wales:  In January 2014, the National Assembly for Wales’s Presiding Officer Dame Rosemary Butler AM, launched the Women in Public Life Development Scheme. It aims to encourage more women to apply for public appointments and other roles in public life, by providing mentoring, role-shadowing and training opportunities. The scheme is the second phase of the Women in Public Life campaign, following on from the Women in Public Life Portal, which provides information about how to get involved in public office, the latest vacancies and training opportunities.  The Welsh Government has also published an action plan to increase the number of women and other under-represented groups in public life, in order to fulfil the Programme for Government commitments to:

This plan also complements the Welsh Government’s Strategic Equality Objective to “improve the engagement and participation of under-represented groups in public appointments in Wales”. Ministers with responsibility for public appointments in Wales have written to Chairs of public sector boards asking them to continue their proactive approach in increasing the number of women and other under-represented groups in public appointments. A summary of key findings and good practice has also been published.  In July 2013 the Minister for Local Government Lesley Griffiths AM established an Expert Group on Local Government Diversity, chaired by Professor Laura McAllister.  The group is tasked with developing an action plan for the Welsh Government, Local Government, political groups and other stakeholders to help increase diversity amongst Councillors elected at the 2017 local elections. It is anticipated that the report will be published in March 2014.  The Equality and Human Rights Commission has announced that it will be taking forward a project looking at the under-representation of women on company boards. This project builds on a previous Commission report which found that the appointment of women to FTSE 350-listed non-executive director roles is being held back by selection processes which favour candidates with similar characteristics to existing male-dominated board members. The focus will be on recruitment practices of corporate companies at board level including the use of head hunters in supporting FTSE 350 companies in filling board level appointments, open advertising of positions and the role of Chairs in ensuring more equal, transparent and open practices.  Further information on women in public life in Wales is available in this blog post.