How will the Syrian refugee crisis affect Wales?

As the Syrian crisis intensifies, there is increasing pressure on the UK to take more refugees, and some are likely to be resettled in Wales. The UN has estimated that more than 12 million Syrians need help, and 4.1 million (nearly a fifth of the population) have fled abroad, mostly to neighbouring countries.

Definitions Refugee: a person who has fled armed conflict or persecution, and who is recognised as needing of international protection because it is too dangerous for them to return home. They are protected under international law by the 1951 UN Refugee Convention. Asylum seeker: someone who has lodged an application for protection on the basis of the UN Refugee Convention or Article 3 of the European Convention of Human Rights (ECHR). Migrant: someone who moves to live in another country for more than a year – this could be for work, a better life, study or other reasons.

According to United Nations High Commission for Refugees (UNHCR), around 10 per cent of Syrians who have fled the conflict have sought protection in Europe; almost 350,000 asylum applications were made between April 2011 and July 2015. Since the start of the humanitarian crisis in early 2011, nearly 5,000 Syrians have been granted leave to remain in the UK for humanitarian reasons, and 87 per cent of initial asylum decisions in Syrian cases gave permission to remain. At the end of June, there were 2,355 asylum seekers (in total, from all countries) in Wales (around 8 per cent of the total in the UK), in receipt of support that they are entitled to if they pass a ‘destitution test’. The vast majority were in the designated dispersal areas of Cardiff (1,041), Swansea (773), Newport (459) and Wrexham (68). The Welsh Refugee Council has suggested that Wales could take 1,600 refugees – 8 per cent of the total 20,000 places committed to by the Prime Minister. 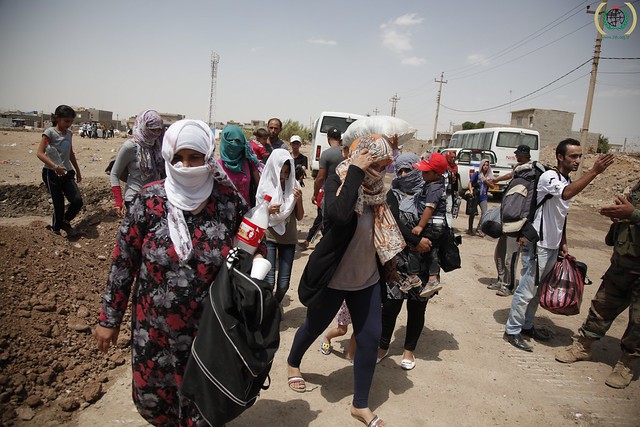 UK response In January 2014, the UK Government declined to participate in the UNHCR’s resettlement programme for Syria, arguing that it would be tokenistic given the huge numbers of refugees and that the best approach to the crisis was the provision of humanitarian aid. However, the UK Government announced the Vulnerable Persons Relocation Scheme (VPRS), to offer resettlement to some of the most vulnerable Syrian refugees, which would run in parallel to the UNHCR’s resettlement programme. In September 2015, following criticisms of the limited number of resettlement places offered in the UK, and in recognition of the worsening refugee crisis in the Syrian region and across the UK, the Prime Minister announced a significant extension of the VPRS. He confirmed that:

People brought to Britain under VPRS have been granted Humanitarian Protection, a status normally used for people who "don't qualify for asylum" but would be at "real risk of suffering serious harm" in their home country. They can stay for five years, have the right to work and access public funds. The UK Government has indicated that at the end of the five years, they will be eligible to apply for permanent settlement in the UK. More information on the status of the Syrian refugees is available in this House of Commons Library briefing. European Union The crisis has also been a dominant issue in the EU institutions. On 22 September the Justice and Home Affairs Council agreed emergency measures to relocate a further 120,000 refugees from Italy, Greece and Hungary to other EU Member States (taking the total agreed figure to 160,000 since May). Host Member States will receive €6,000 for each relocated person. The UK and Denmark are not participating in this decision: according to their specific terms of membership of the EU they have no obligation to do so. Although Ireland is not bound by the terms of this agreement, it has expressed its intention to participate. This Council agreement comes just three weeks after the European Commission proposed these measures – a remarkably quick turnaround in EU terms. On 23 September the European Council (heads of Member States governments) held an informal meeting looking at the crisis. This largely resulted in calls for further funding for the agencies involved in tackling the crisis. Welsh Government response The Welsh Government does not have power over immigration, but has been active in its response to the crisis. On 17 September, the First Minister held a summit on the crisis. The communique published by the Welsh Government following the summit on 17 September highlighted:

On the same day as the summit, the Minister for Communities and Tackling Poverty published a consultation on the Welsh Government’s Draft Refugee and Asylum Seeker Delivery Plan. The revised Plan will be published by the end of January 2016. The previous Refugee and Asylum Seeker Action Plan ran from 2011 until 2014. The consultation document states that “there have been many changes during the last few years to [Welsh and UK] government policies”, and a ‘pre-consultation’ event was held in December 2014 to collect views on the current issues facing asylum seekers and refugees. The draft delivery plan does not specifically mention the current Syrian crisis, or how many places may be available in Wales. Neither does it contain any performance indicators, but the consultation document states that the Welsh Government will ask stakeholders how it “can monitor the delivery plan.” In plenary on 15 September, the First Minister said that he was in favour of a resettlement quota system for each nation, in principle. He also stated:

I think that [the refugee summit on 17 September] is not so much about looking at agreeing on the number of people that we should take. I think that’s an artificial level, especially given what’s happened in the past week or two. But I do think it’s important that we are ready across the public sector in Wales to be able to resettle people when that time comes.

The Minister for Communities and Tackling Poverty will make a statement on the crisis in plenary on Tuesday 6 October.