It is nearly six months since Russia invaded Ukraine. During this time nearly six million Ukrainian refugees have been displaced across Europe.

The UK Government opened several immigration routes for Ukrainians who wish to seek sanctuary in the UK, including the Ukraine Family Visa Scheme for those with family connections and the ‘Homes for Ukraine’ scheme. By 18 July a total of 99,700 people had arrived in the UK through the two schemes.

This article builds on our previous article about Wales’ response to the crisis and draws on the Senedd’s Local Government and Housing Committee’s inquiry into housing Ukrainian refugees.

Do we know who has arrived in Wales?

Welsh Government pledged to becoming a ‘super sponsor’ and committed to initially accommodating up to 1,000 Ukrainian refugees. By 19 July 4,192 Ukrainian refugees had arrived in Wales via the ‘Homes for Ukraine’ scheme, according to the UK Government’s weekly updates on arrivals. 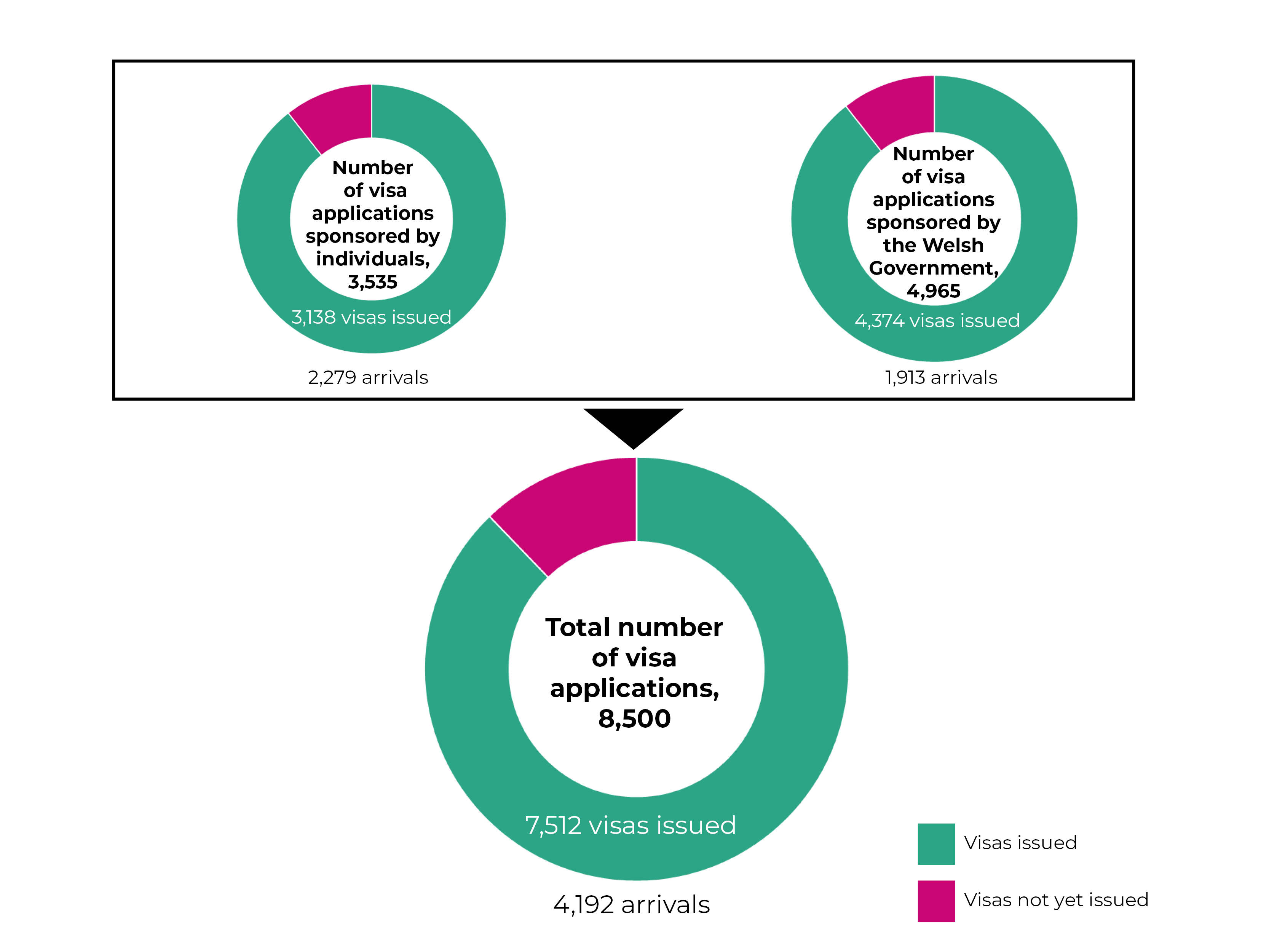 There are also weekly updates on the breakdown of numbers of arrivals and visas issued via the ‘Homes for Ukraine’ scheme across all 22 local authorities.

Data relating to arrivals in Wales via the Family Visa Scheme is more limited. The Senedd’s Local Government and Housing Committee heard it’s difficult for local authorities and other organisations to effectively target support, to plan for increased demand for services and to identify any safeguarding issues when it’s unclear as to the number of people they’re dealing with.

How effective is the 'super sponsor scheme'?

The Welsh and Scottish Government's suggested the 'super sponsor' scheme to support a 'fair and proportionate number of refugees' being allocated to Wales and Scotland. In its role as a ‘super sponsor’ the Welsh Government has opened six welcome centres where refugees are expected to stay for around three months. It is envisaged that following their stay they will be placed with a host or moved into their own accommodation.

In a written statement on 8 June the Minister for Social Justice announced the decision to introduce a temporary pause on new ‘super sponsor’ applications during June. Then, on 6 July, the Minister announced that no new applications would be accepted until the Welsh Government had refined the arrangements it had in place for supporting the refugees. She said the Welsh Government would continue to work with partners and stakeholders to:

help people from Ukraine transition from the welcome centres into longer-term accommodation in communities across Wales.

During the Committee’s evidence sessions, stakeholders such as the Welsh Local Government Association (WLGA) and Wales Council for Voluntary Action (WCVA) were generally supportive of the welcome centre model, particularly in the way it frontloads support for new arrivals. The stakeholders agreed that halting applications is a sensible approach. In their view, it allows further opportunities to plan and examine the processes in place.

Meeting the longer-term accommodation needs of refugees is a key factor in whether the resettlement is a success. The sponsorship route involves being housed in the short-term by individual sponsors’. Likewise the welcome centres are intended to be short term arrangements. So more permanent accommodation is needed in the longer-term whether this is after the minimum six months’ sponsorship, or in the event the sponsorship breaks down. The Committee heard that half a dozen sponsorship placements had broken down in Pembrokeshire, with the Council having to match them with new sponsors.

Wales already has different groups of people waiting to be permanently housed. This includes those in temporary arrangements from previous refugee resettlement schemes such as the Afghan Relocations and Assistance Policy (ARAP) and the Afghan Citizens Resettlement Scheme as well as 8,000 non-refugees in local authority provided temporary accommodations.

Each local authority has received details of individuals who have expressed interest in offering short-term sponsorship accommodation. But the Interim Head of Housing and Public Protection Services, for Pembrokeshire County Council has questioned the long-term sustainability of using sponsored accommodation. It’s estimated that in Pembrokeshire the council may need to find an additional 70 units of accommodation to house people from Ukraine, which is in addition to the long-term housing needed for the 130 households already in temporary accommodation.

The Welsh Government have committed to funding Housing Justice Cymru to deliver support for hosts, including information sessions and host-peer support. This could address some concerns that if existing sponsorship placements break down, there could be additional pressure on local authority housing services.

Are refugees safe once they arrive in Wales?

Since the UK Government announced the Homes for Ukraine scheme it has attracted sustained criticism that it’s open to exploitation, for example the United Nation Refugee Agency (UNHCR) highlighted the need for adequate safeguards and vetting measures to be put in place. There are fears that safeguarding procedures are not robust enough, which potentially places vulnerable people, particularly women and children, at risk of abuse by sponsors. These concerns have been echoed by the Welsh Government.

While Homes for Ukraine is a UK Government scheme, responsibility for safeguarding ultimately rests with the relevant local authorities. These local authorities have to carry out the checks on individual sponsors in a timely manner, crucially before refugees move into the sponsored accommodation and make contact with refugees after they settled.

The Committee heard that the Welsh Government, local authorities, partner and third sector organisations have worked quickly to mitigate potential risks. The WLGA told the Members that it is working to speed up the length safeguarding checks take on individual sponsors, and checks are completed before anyone is moved from a welcome centre into sponsored accommodation.

In terms of the Family Visa Scheme, no safeguarding checks are required.

Local authorities receive £10,500 per refugee accommodated via the Homes for Ukraine scheme. No similar payment has been made to the Welsh Government to support those who are accommodated at the welcome centres they have established in their role as a ‘super sponsor’. The Minister for Social Justice has described these costs as ‘significant’.

You can follow the Committee’s inquiry here. You can also see the weekly data published here.