The Programme for International Student Assessment (PISA) 2018 results were published yesterday. They show that Wales’ scores: 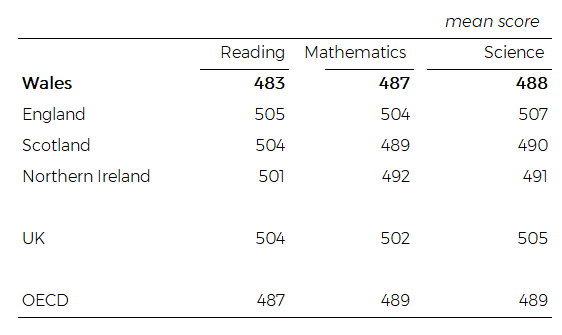 The information in Tables 1 and 2 above is also shown in the infographic below.

The official report on Wales’ results produced by the National Foundation for Educational Research (NFER), provides further information and analysis on a range of aspects of PISA including the scores of the highest and lowest achieving pupils, the gap between these compared to other countries, and gender and socio-economic factors. Some key points include:

PISA evaluates countries’ education systems based on the performance of a sample of 15—year-olds across three main domains: reading, mathematics and science. It is held every three years and is run by the Organisation for Economic Co-operation and Development (OECD). Reading was the lead domain in PISA 2018, which meant there were additional questions and greater analysis of the results.

For further information on PISA, the OECD and the influence of both on Welsh Government policy, see the article we posted last month.

What is the Welsh Government’s target?

The Welsh Government’s target is that Wales scores 500 points in each of reading, mathematics and science by PISA 2021. Its 2018 scores fall 17, 13 and 12 points short of the 2021 target in these three domains respectively. To put the scale of improvement needed for Wales to meet its 500 point target into some context, its performance increased by 6, 9 and 3 points in reading, mathematics and science respectively since 2015.

How many pupils took the tests in PISA 2018?

3,165 pupils in 107 schools across Wales took the PISA 2018 tests between late October and mid-December 2018, during a two hour computer-based exercise. There are around 30,000 pupils in Year 11 and 187 secondary schools in Wales.

The majority of pupils taking the tests were in Year 11, whilst some were in Year 10; all were aged 15. NFER’s report gives further information on sampling arrangements (see pages 200-204).

What has the response been?

The Welsh Government issued a press release alongside the publication of the results, in which the Minister for Education, Kirsty Williams, described them as “positive, but not perfect”. She said:

We have caught up, we are continuing to improve in all areas and as a nation we must be determined to keep up this momentum.

The Minister also made a statement and answered questions in Plenary on 3 December 2019. She and the First Minister both acknowledged that further improvement was particularly needed in boys’ performance in reading. Questions from other Assembly Members focused on, amongst other issues, the 500 point target for 2021, the fact that Wales’ scores remain the lowest in the UK, more able and talented learners, pupil well-being and curriculum reform.

The Welsh Government’s school improvement policies are set out in its action plan, Education in Wales: Our National Mission 2017-2021. Our previous articles set out the background to the key areas of curriculum reform and school accountability.

Beyond the Senedd, here is some of the reaction from stakeholders:

Other measures of progress

PISA is not the only way of evaluating how the Welsh education system is performing.

Information on 2019 GCSE results can be found in our article from August and the Welsh Government’s statistical release published today. And Estyn’s Chief Inspector publishes an annual report on what the inspectorate has observed during the year. Its 2018/19 report, due to be published in early 2020 will include a ‘state of the nation’ focus, taking into account the results of PISA 2018.

The Assembly’s Children, Young People and Education Committee will be discussing school improvement and raising standards with the regional consortia and the Minister in the New Year.