This article was originally published on 22 August 2019, the day of the publication of the 2019 results. It is being reposted ahead of a Plenary debate on 2 October 2019 regarding GCSE results.

Note that the data in Tables 1 and 2 of this article only includes entries for GCSEs that continue to be graded on an A*-G basis. A very small minority of pupils in Wales took GCSEs provided by awarding bodies in England which began using a grading scale of 9-1 for GCSEs in 2017. The Joint Council for Qualifications (JCQ) reports attainment figures in Wales for both A*-G graded GCSEs (for which there were 289,502 entries in 2019) and A*-G graded GCSEs and 9-1 graded GCSEs (for which there were 295,690 entries in 2019), which result in there being slightly different pass rates for grades A*-C (62.4% in 2019) and grades A*-C or grades 9-4 (62.8% in 2019).

Today students in Wales, England and Northern Ireland receive their GCSE results. The Joint Council for Qualifications (JCQ – a membership organisation of the seven largest providers of qualifications in the UK) publish summaries of the collective results (PDF 130KB) of the GCSEs awarded by its members.

How many students in Wales were entered for GCSEs this year?

In May 2019, Qualifications Wales published provisional data on examination entries this year. In 2018 there had been a decrease in GCSE entries of 13 per cent since the previous year. But this year, entries have increased by 4.5 per cent. The main increase in entries has been Year 11 pupils. This may be due to the Welsh Government’s policy change on school performance measures. Following concerns about the growing trend of year 10 pupils (or younger) being entered for GCSEs, Kirsty Williams, Minister for Education announced on 17 October 2017 that from summer 2019, only the results of a pupil’s first GCSE entry will count towards how a school’s performance is measured. This is intended to discourage schools from entering pupils into GCSE examinations before they are fully ready. More information on entry patterns can be seen on Qualifications Wales guest blog.

How have GCSE’s changed?

GCSEs are going through a programme of reform in England also., where a new grading scale of 9 to 1 rather than A*-G has been introduced. These do not directly correspond to the previous letter grades, so a grade 9 is not directly comparable to a grade A*. Ofqual have published an infographic that shows how the number and letter grades compare. This has made comparing GCSE results between Wales and England even more difficult. In Northern Ireland, the Council for Curriculum, Examinations and Assessment has also changed its grading system, introducing a C* grade. Other awarding bodies offering GCSEs in Northern Ireland use the number grading system.

How do this year’s results compare to previous years?

Table 1 below shows the GCSE results in Wales over the past five years. Data is provisional representing the position at the time that results are issued. Comparison between years is more difficult in times of reform and should be treated with caution. For example, the results for 2017 showed a decrease in performance and this has been attributed to a number of factors such as the increase in learners entering their GCSEs early, and 2017 was the first year that reformed GCSEs were taken in six subjects. There was also a shift towards increasing entries for GCSEs rather than vocational qualifications at Key Stage 4.

Table 2 below show the provisional GCSE results for Wales for 2019 alongside those for 2018. The data in both tables in this article is extracted from information published by JCQ today and the data published by JCQ on GCSE results day in previous years. The data is provisional, representing the position at the time that results are issued, and is also subject to checking before final data at Wales, local authority and school level is published. The results published by the JCQ relate to ‘entries’ and not to ‘candidates’. Therefore, the data can show that performance has increased or declined at GCSE or within the grades, but it cannot show how individual candidates have performed, for example, whether more boys or girls achieve five or more grades A*-C at GCSE. The data relates to the outcome of the individual subject areas for all regardless of their age. 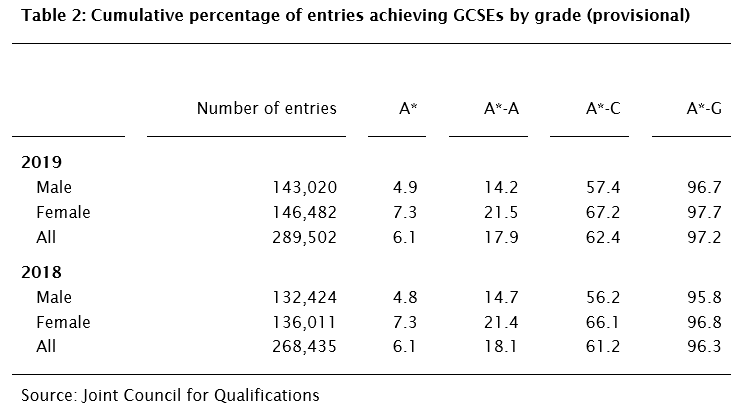 What about the Welsh Baccalaureate?

At Key Stage 4, the Welsh Bacc can be awarded at Foundation (level 1) or National (level 2). The Welsh Bacc comprises GCSEs in English or Welsh Language, and Mathematics or Mathematics-Numeracy or the literacy and numeracy components of the Essential Skills Wales qualification; supporting qualifications such as GCSEs or vocational qualifications; and the Skills Challenge Certificate.