The recent bad weather in Wales has raised questions again about the building of houses and other premises on land that is susceptible to flooding.

There have been calls for the Welsh Government to review its planning policies and guidance on development and flood risk. Planning Policy Wales advises that Local Planning Authorities should only consider development proposals in areas defined as being of high flood hazard on the following basis:

TAN 15: Development and Flood Risk issued in 2004 advises Local Planning Authorities that new development should be directed away from those areas which are at high risk of flooding. It classifies types of development into three categories according to how vulnerable they are to flooding:

Development Advice Maps containing three zones (A, B and C) are used to trigger the appropriate planning tests to assess whether or not these categories of development should be considered.

Zone A (little or no risk of flooding) – no tests required;

Zone B (known to have been flooded in the past) - generally suitable for most forms of development as long as site levels are above the extreme flood line;

Zone C is based on the extreme flood outline, which is equal to or greater than a 1 in 1,000 chance of river, tidal or coastal flooding in any given year. It is split into Zone C1 (floodplain which is already developed and served by significant infrastructure, including flood defences) and Zone C2 (floodplain without significant flood defence infrastructure) – some types of development are unacceptable in Zone C2, whilst others can only proceed anywhere in Zone C with certain requirements being met such as adequate flood defences, escape routes present, flood emergency plans and flood resistant design.

New development should therefore be directed away from Zone C and towards suitable land in Zone A, otherwise to Zone B, where river or coastal flooding will be less of an issue.

For any development proposals put forward in Zone C, a Flood Consequences Assessment is required. Natural Resources Wales should also be consulted on any planning application that falls within Zone C.

The Development Advice Maps that are associated with TAN 15 are reviewed at least every four years – the last review was in March 2013 and the Chief Planner wrote to Local Planning Authorities to advise them that the maps had been updated. The letter states that the updated maps contain a number of changes including where C2 zones have been extended in some areas. Over time the maps have become more sophisticated as better information has become available.

Natural Resources Wales (previously Environment Agency Wales) monitors the number of planning applications for development in flood risk areas that are granted (although not all necessarily built) by Local Planning Authorities contrary to its advice. Although the number of such cases has fallen significantly from a peak in 2005/06 there are signs of a small increase over the last couple of years. 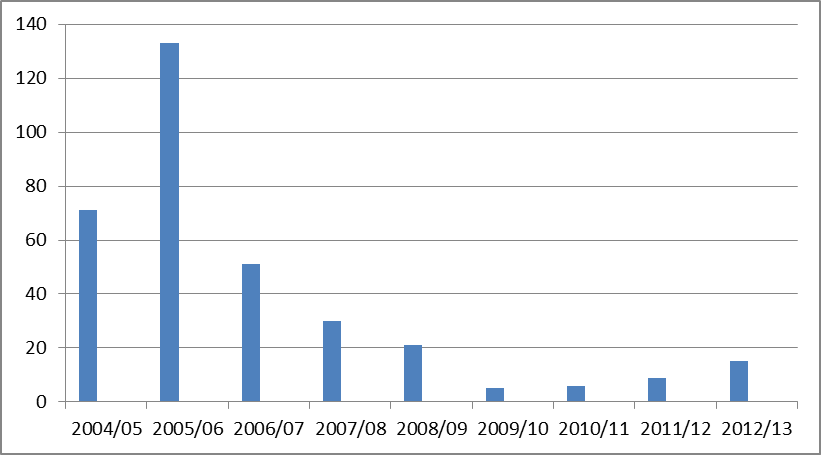 Evidence from Environment Agency Wales had previously highlighted discrepancies in how Local Planning Authorities were following the advice in TAN 15.  In order to address this, in 2012 the Welsh Government introduced a new Notification Direction which now requires authorities to notify the Welsh Government if they are minded to approve developments in Zone C2, such as a residential development of 10 or more dwellings, contrary to TAN 15.  The Welsh Government can then consider ‘calling-in’ these applications and deciding them itself.