Devolution 20 - How has the 'size of Wales' changed?

Much has changed in Wales in the twenty years since the first National Assembly for Wales was elected in May 1999. This is the first in a series of articles that attempts to describe some of that change. It has been prepared by Senedd Research as part of the Assembly’s activity to mark twenty years of devolution.

The population of Wales grew by 225,000 (or 7.7 %) between 1999 and 2017, according to the latest mid-year population estimates produced by the Office for National Statistics (ONS). Data on migration flows is only available from 2001 to 2017 so the following analysis focuses on this period.

How is population changing in your area? The chart below shows the percentage change in population of each local authority from 2001 to 2017. 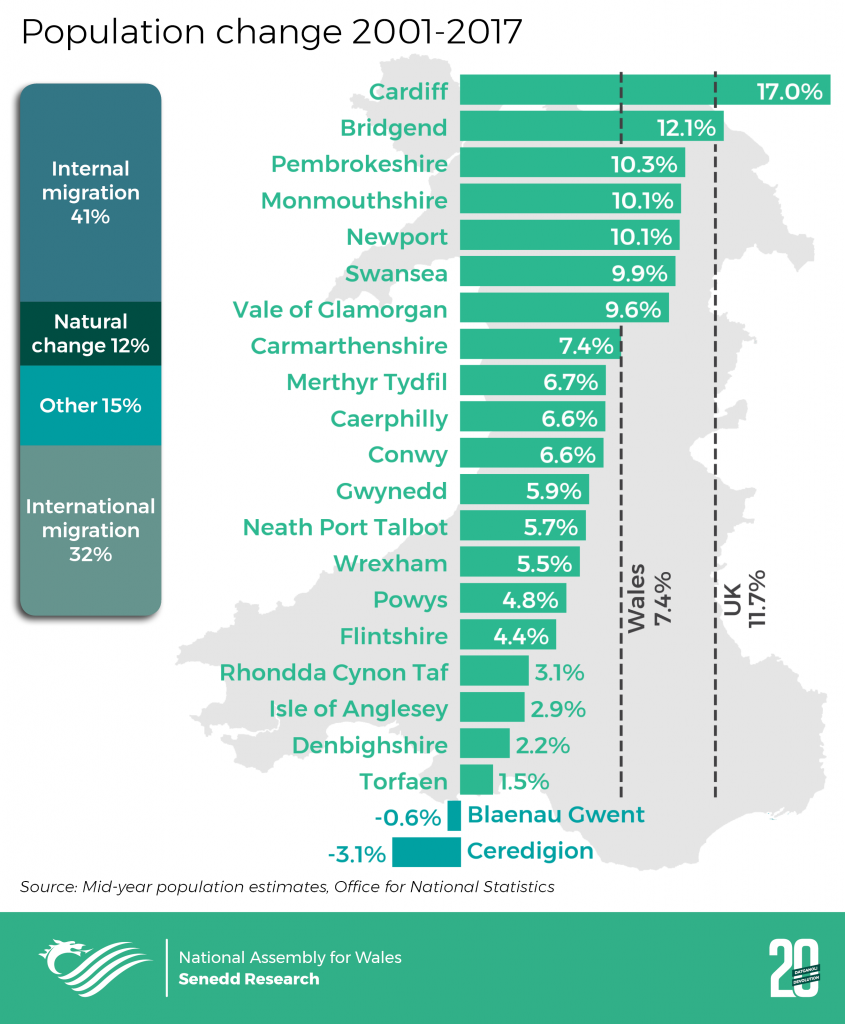 The local authority with the biggest population increase was Cardiff (17.0%) where growth was above both the Wales average (7.4%) and the UK average (11.7%). A population decrease was observed in Blaenau Gwent and Ceredigion.

The drivers of growth in the population of Wales were:

Between the 2001 and 2011 censuses, the percentage of the Welsh population describing their ethnic group as White British fell from 96.0% to 93.2% whilst the percentage describing themselves as non-White (including mixed) ethnic groups increased from 2.1 to 4.0%. Wales remains markedly less diverse than England and Wales taken together, where 80.5% of people identified as White British in 2011.

The population of non-White ethnic groups is centred on the southern cities. The local authorities in Wales with the lowest proportion of the population describing their ethnic group as White in 2011 were Cardiff (84.8%), Newport (89.9%) and Swansea (94.1%).

2011 was the first year the census asked a question about national identity. Nearly two-thirds (66%. 2.0 million) of Welsh residents expressed their national identity as Welsh: of these, 218,000 (7.1% of the total population) also reported that they considered themselves to be British.

Where do people move to Wales from? Inward migration has increased since 1999. On the atlas below, the arrow widths are scaled to represent the proportion of moves to Wales from each continent during the period 1999-2017. 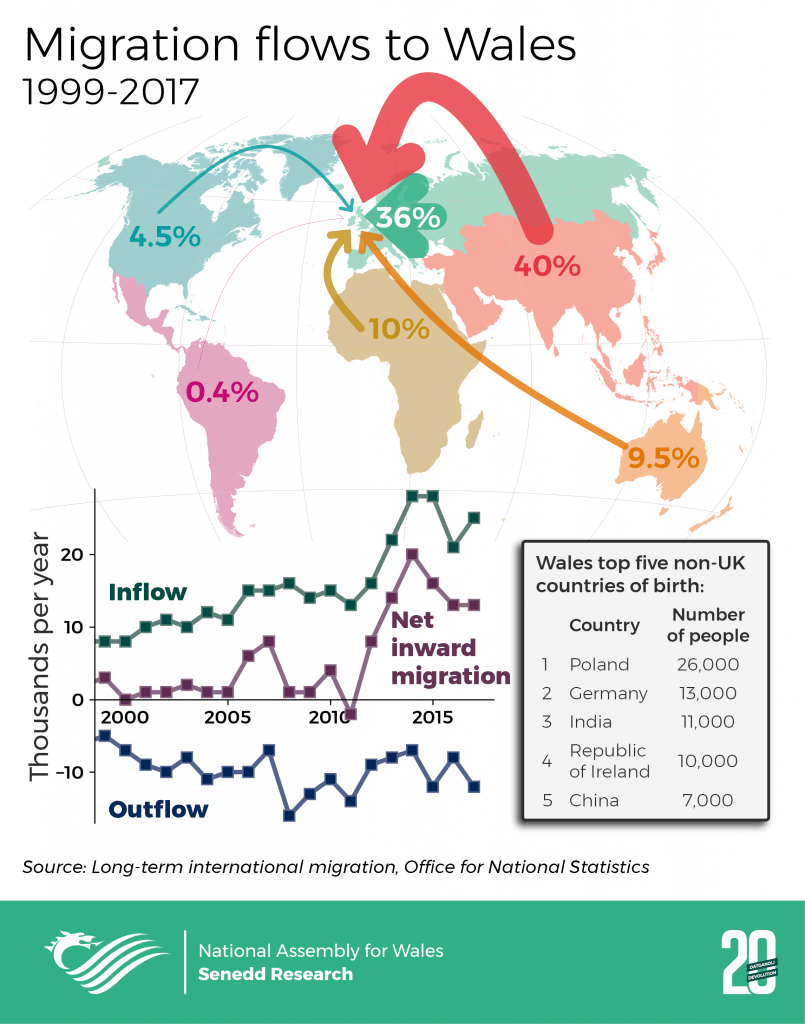 The most rapid increase occurred from 2011 to 2014 and peaked at 28,000 migrants per year. Outward migration was slightly steadier and largely balanced inward migration until about 2012. From 2013-2017 inflow exceeded outflow by more than 10,000 people per year.

Factors that influence migration, such as the UK’s relationship with the EU, are unpredictable. Combined with the volatility in the data, this makes it difficult to produce a future projection of migration.

The population pyramids below show the number of males and females of each single year of age. Ripples in the distribution’s width reflect differences in birth and death rates between generations. For example, the spikes in the number of people aged 52 in 1999 and aged 70 in 2017 (indicated by arrows) are due to the post-war baby boom.

The age distributions of males largely reflects that of females. One exception is that in 1999, there were substantially fewer men than women in the over 60 age group. 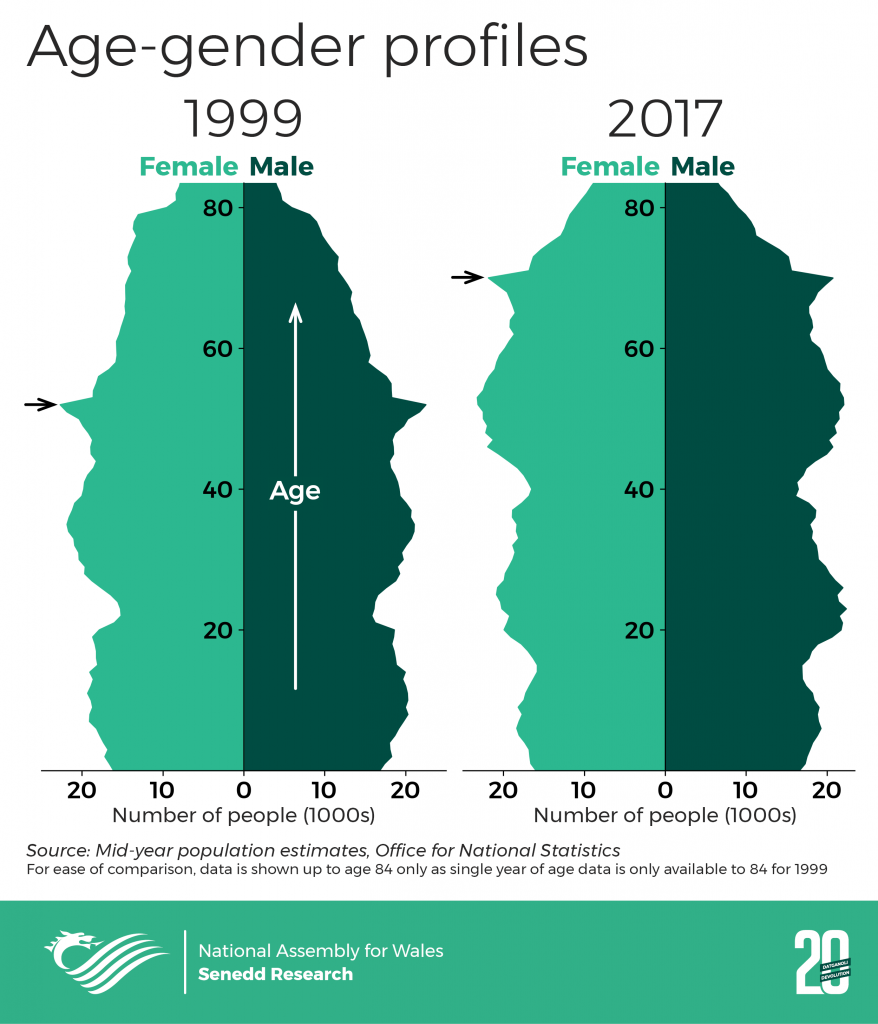 Although the differences in the age distributions were small, they are expected to change dramatically in the future, as discussed below.

Looking to the next 20 years, the 2016-based population projections produced by ONS provide some insight as to how Wales’ demography may change:

The big story in these projections is an expected increase of people aged 65 and over by 30%. An ageing population puts increasing demand on the provision of health and social care, as well as other services, such as home adaptations. As the Assembly’s Finance Committee notes in its inquiry report ’ 'The cost of caring for an ageing population', the increase in the proportion of older people is significant since a longer lifespan means that there are many more people with care and support needs arising from chronic conditions, including dementia and frailty in older age. These extra services will be required at a time when public finances are impacted upon by a reduction in the working age population.

A growing population increases the demand for new homes. It is currently estimated that between 6,700 and 9,700 additional housing units will be required each year between 2018-19 and 2022-23. New homes will need more schools as well as transport services and infrastructure to connect them. There are also implications for natural resources and the environment.

The detail of these claims should be treated carefully as projections only indicate how the population will change if current trends continue. They do not make allowances for a changing economy, new government policies, international relations, housing availability, diseases or epidemics, technological advances or any other societal factors. Projections are increasingly uncertain and increasingly sensitive to the underlying assumptions and input data the further they are carried forwards. 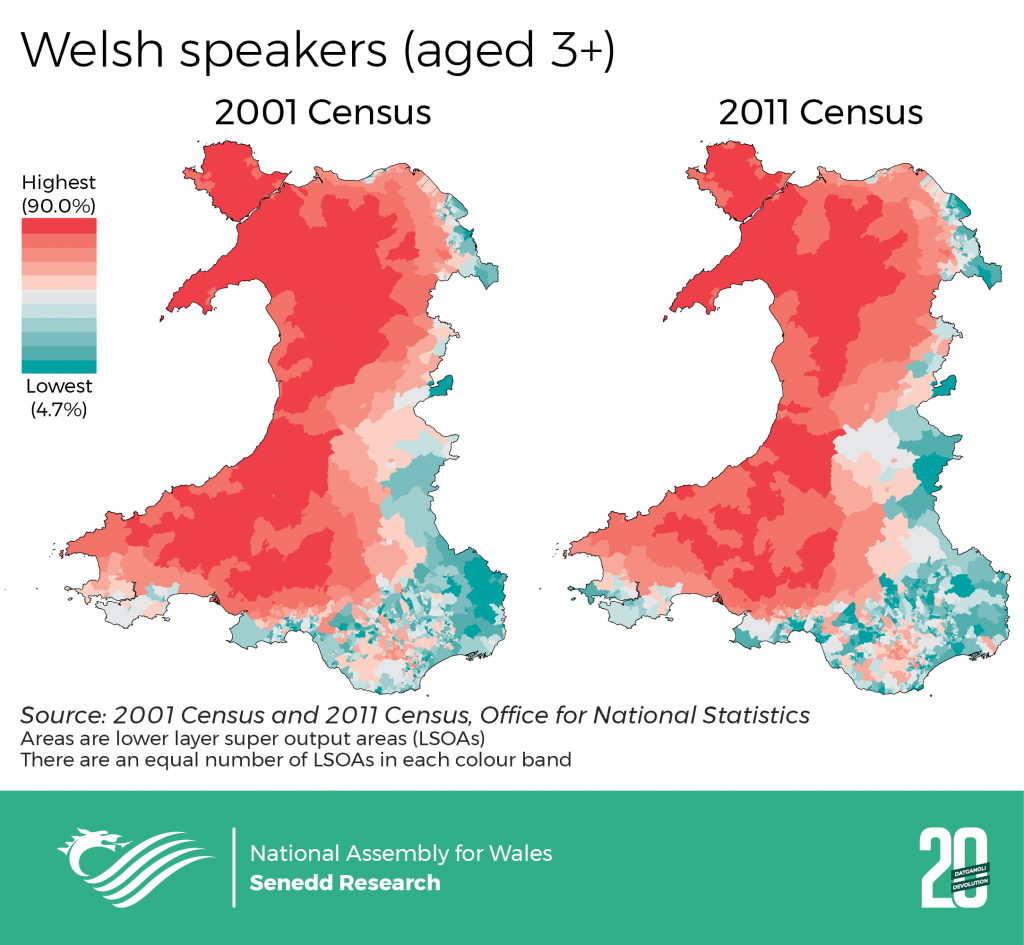 The Census shows a decrease in the percentage of Welsh speakers from 21% (582,000) in 2001 to 19% (562,000) in 2011. The ONS Annual Population Survey (APS) which asks a similar question to a sample of households on Welsh language ability suggests that the number of people reporting they can speak Welsh has risen steadily since 2010, with the latest data in 2018 reporting that over 875,000 people aged 3 and over can speak Welsh.

The Welsh Government has set itself an ambitious target to grow the number of Welsh speakers to one million by 2050 (based on Census results). Its Welsh language strategy, Cymraeg 2050, sets out the key interventions, support and investment required to achieve this goal. These include such things as expanding Welsh-medium early years provision, increasing the proportion of children receiving Welsh-medium education and developing opportunities and promoting its use socially and in the digital sphere.

The next article to be published tomorrow will look at travel.