The pandemic is having an unequal impact on people living in poverty. This is shown through inequalities in health, employment, outgoings and education.

Nearly a quarter of people in Wales live in poverty. People from certain ethnic groups, children, disabled people, carers, those living in private rented housing or working in certain sectors are all more likely to experience poverty. 44% of single parents live in poverty in Wales.

Existing health inequalities could be leading to higher coronavirus mortality 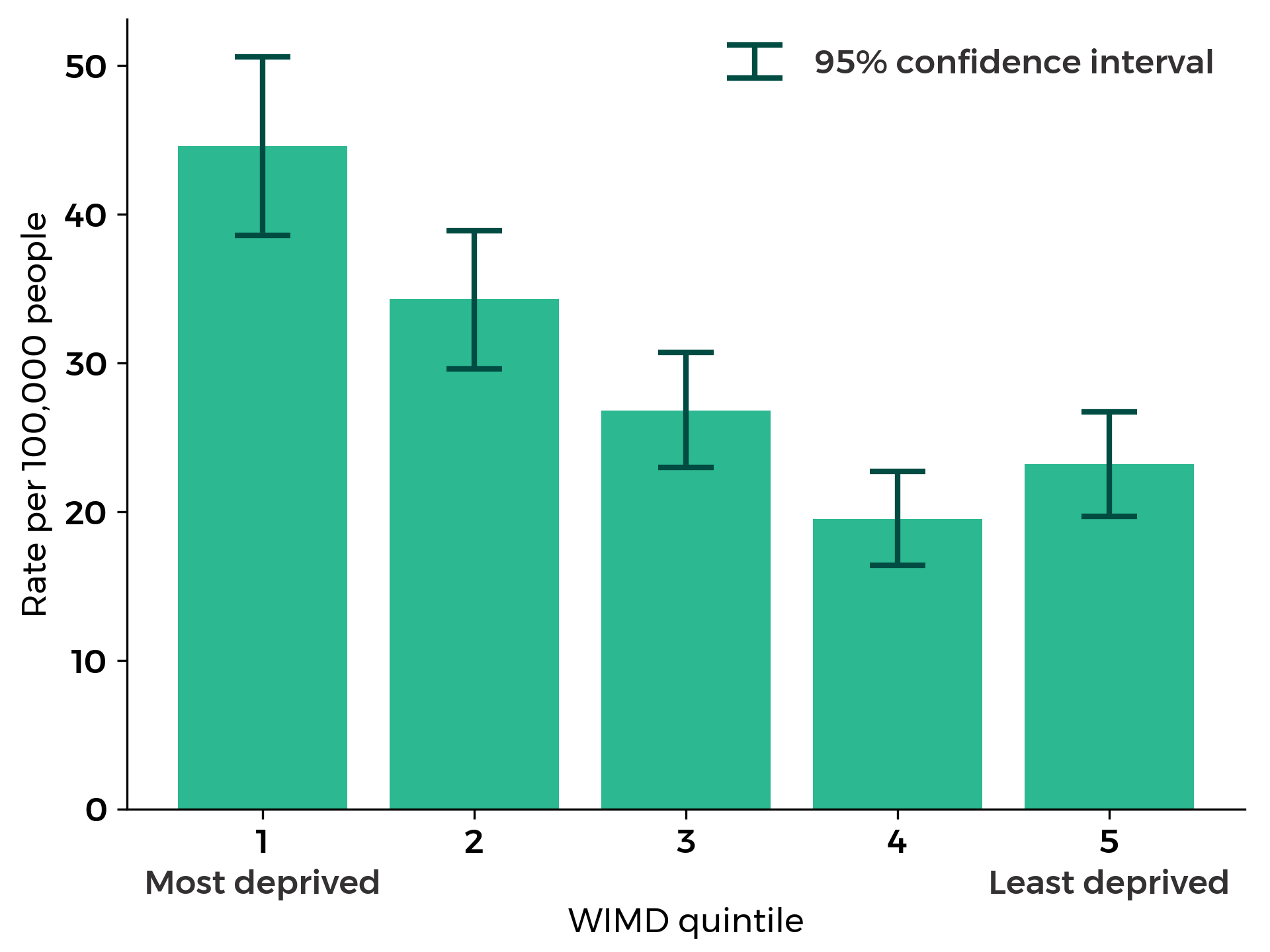 As outlined in our previous article, the Welsh population is more vulnerable to coronavirus because of its demography.

People living in poorer areas are also more likely to have health conditions that put them at higher risk of complications from coronavirus:

There have been some calls for health funding to be prioritised for poorer areas as a result of these inequalities.

Analysis by the Institute for Fiscal Studies (IFS) shows that low earners are seven times as likely as high earners to work in a sector that is now shut down, such as non-food retail, hospitality and leisure.

The Bevan Foundation estimate that 211,500 people in Wales are employed in these sectors, making up 16% of employment.

People working in sectors such as accommodation and catering or retail were already more likely to live in poverty.

As noted in our previous article, young people’s incomes are likely to be most affected, as they are more likely to work in shut down sectors, and the rates of many benefits are lower for people aged under 25.

Research by Cambridge, Oxford and Zurich Universities found that UK workers who earned less than £20,000 last year can do 30% of the tasks in their main job from home, compared to 55% for those earning more than £40,000.

This is also reflected in survey data they collected on 25 March. This showed that 33% of workers earning less than £20,000 last year had worked more from home in the previous week, compared to 72% of those earning more than £40,000.

The UK Government’s Coronavirus Job Retention Scheme allows employers to ‘furlough’ employees while continuing to pay them at reduced rates instead of making them redundant.

But the scheme does not cover wages for people who have had their hours and/or wages cut, or if they have already lost their job (although employers can choose to rehire and furlough them).

Research by Citizens Advice shows that:

The decision to access the Job Retention Scheme is down to employers. Citizens Advice has suggested some employers are choosing not to access the scheme. It is calling for the UK Government provide employees with the ‘right’ to be furloughed instead. They also call for incentives or obligations for employers to use the scheme.

Drops in income could lead to other risks

Reductions in income could also reduce the means which people in abusive situations can use to escape. Research for the Joseph Rowntree Foundation shows a link between domestic abuse and ‘low income, economic strain, and benefit receipt’. These issues are covered by our previous article on domestic abuse.

Poverty is also linked with suicide. Research by Samaritans Cymru from 2018 shows that admissions to hospital following self-harm are two times higher in the most deprived neighbourhoods compared to the most affluent in Wales.

There has been a surge in applications for welfare benefits

As outlined in our previous article, there are many groups of people who will not be able to access the various income support schemes, like those who have been self-employed for less than a year. These people will likely rely on benefits to make up reductions in income.

Nearly two million people applied to Universal Credit since 16 March in the UK.

The UK Government made a range of changes to the benefits system during the outbreak (outlined in our benefits article), including increasing Universal Credit and Working Tax Credit by £20 a week. There are calls for this increase to be extended to other benefits for disabled people and carers.

The Welsh Government announced an extra £11 million for the Discretionary Assistance Fund (DAF) in 2020-21, which was originally £11.2 million. The DAF provides non-repayable grants to people on low incomes in Wales who need help with essential costs (such as food, gas, electricity, clothing and emergency travel) following ‘emergency situations’, or who are in extreme financial hardship for reasons including delays in benefit payments.

The Child Poverty Action Group (CPAG) recommend that the number of DAF referral partners should be increased and the application process made easier. Over £500,000 in DAF payments was paid between 18 March and 30 April, but some of these may be related to the February floods too.

People are worried about increases in bills and debt

Data from Citizens Advice shows that people are worried that they won’t be able to afford rent or pay their bills. It found that an estimated six million people have fallen behind on a household bill due to coronavirus.

ONS statistics show that the proportion of people who are struggling to pay bills increased on the previous week from 13% to 15%.

Anti-poverty campaigners have drawn particular attention to the low incomes of carers, both paid and unpaid. Research by Carers Wales has found that 77% of unpaid carers are having to spend more money during the outbreak.

The Welsh Government provided advice to tenants, who are currently entitled to at least three months’ notice if their landlord wishes to evict them. The UK Government increased housing support through Universal Credit and Housing Benefit “so that the local housing allowance will cover at least 30% of market rents” within a Broad Rental Market Area. There have been calls by renters’ unions for rent suspensions during the outbreak.

The UK Government has also agreed with mortgage lenders that they will offer three month repayment holidays to households in financial difficulty due to the pandemic. This extends to buy-to-let mortgages too.

The Bevan Foundation has called for the Welsh Government to top up the UK Government funding for Discretionary Housing Payments (DHPs), which are administered by local authorities.

With adults and children at home for longer periods in the daytime, energy bills have increased. People on pre-payment meters who are self-isolating and cannot add credit are advised to speak to their suppliers.

There is some evidence that the price of some high-demand food has also increased. The Welsh Government has guaranteed ongoing funding for children to continue to receive free school meals during the summer holidays. The Bevan Foundation argue for this support to be provided in cash rather than vouchers.

The Trussell Trust reported a 81% increase in demand for emergency food parcels from food banks in its network during the last two weeks of March, compared to the same period in 2019.

Citizens Advice has made a number of recommendations to help people repay debts built up due to coronavirus in a sustainable way without a ‘cliff-edge’, including:

Educational attainment gaps between the poorest and richest students could widen

As outlined in our previous article, there are concerns that school closures could widen the educational attainment gap between the least deprived and most deprived children.

There is a ‘strong link’ between educational achievement and the level of entitlement to free school meals in schools.

The Welsh Government includes ‘the ability to prioritise learners at key points, including those from disadvantaged backgrounds’ as one of its five principles for recovery phase planning for education.

On 30 April, the Minister for Education announced up to £3 million to provide laptops and mobile internet for ‘digitally excluded’ pupils.

There are worries that the use of predicted or calculated grades could disadvantage poorer students.

There are also concerns about the effect of moving university courses online on poorer students. A 2017 study showed that students from disadvantaged backgrounds ‘consistently perform worse in an online setting than they do in face-to-face classrooms’. The study added that taking online courses increases their likelihood of dropping out and stalls their progress.

People on low incomes may be less able to practice social distancing if they live in smaller and more crowded housing, or without gardens.

In 2011, more than 80,000 households in Wales (6% of households) lived in homes with more than 1.5 people per bedroom. As noted by the Bevan Foundation, the number of people with a spare room is likely to have decreased because of reforms to the UK social security system from 2012. Social renters are more likely to be in overcrowded housing than private renters.

People accommodated in homeless hostels and women’s refuges are also at a higher risk as many live in shared rooms. The Welsh Government provided £10 million to house rough sleepers during the outbreak, but Welsh Women’s Aid has criticised the lack of similar funding for domestic abuse services.

The Refugee Council are particularly concerned about asylum accommodation (which is the responsibility of the UK Government), even though evictions have been paused for three months.

As noted by the Bevan Foundation, 14% of households in Wales do not have access to a car and will rely on higher-risk public transport when workplaces and schools re-open.

Households on lower incomes could be ‘digitally excluded’ during the lockdown

But around 13% of households in Wales have no access to the internet, and 51% of people over 75 do not use the internet. There is evidence to suggest that those on low incomes are less likely to have an internet connection in the home.

A Senedd Committee found in 2017 that rural poverty and disability were contributing factors in loneliness and social isolation. But it also found that digital technology was a ‘double edged sword’.

The Equality, Local Government and Communities Committee is currently gathering evidence on the impact of the pandemic on the issues within its remit, including poverty and equality.