Have official statistics started to reflect the impact of coronavirus on the labour market?

Each month the Office for National Statistics (ONS) publishes estimates of employment and unemployment rates. These estimates are based on information collected by the Labour Force Survey (LFS) for the preceding three-month period. The time lag to these figures means that the latest labour market release published on 23 March 2021 provides information from November 2020 to January 2021. The March LFS figures do not reflect the number of people who have been placed on furlough due to coronavirus.

The latest HMRC statistics on the Coronavirus Job Retention Scheme (CJRS) show 178,000 employments in Wales have been furloughed as at 31 January 2021. This represents a take up rate of 14%.  92,500 females and 85,400 males were furloughed under the CJRS in Wales as at 31 January 2021. Data at a constituency level shows the take up rate of furloughed employments is highest in Dwyfor Meirionnydd (22%) and lowest in Islwyn (10%).

What do the latest Labour Force Survey figures show?

The Labour Force Survey (LFS) is a quarterly household survey of around 80,000 adults. The survey asks a range of questions on employment and the labour market. As people are still furloughed this doesn’t reflect the full impact of coronavirus on the labour market in Wales.

ONS notes the LFS responses are weighted to 2018-based population projections that pre-date the coronavirus pandemic stating:

Rates published from the LFS remain robust; however, levels and changes in levels should be used with caution. This will particularly affect estimates for country of birth, nationality, ethnicity and disability. 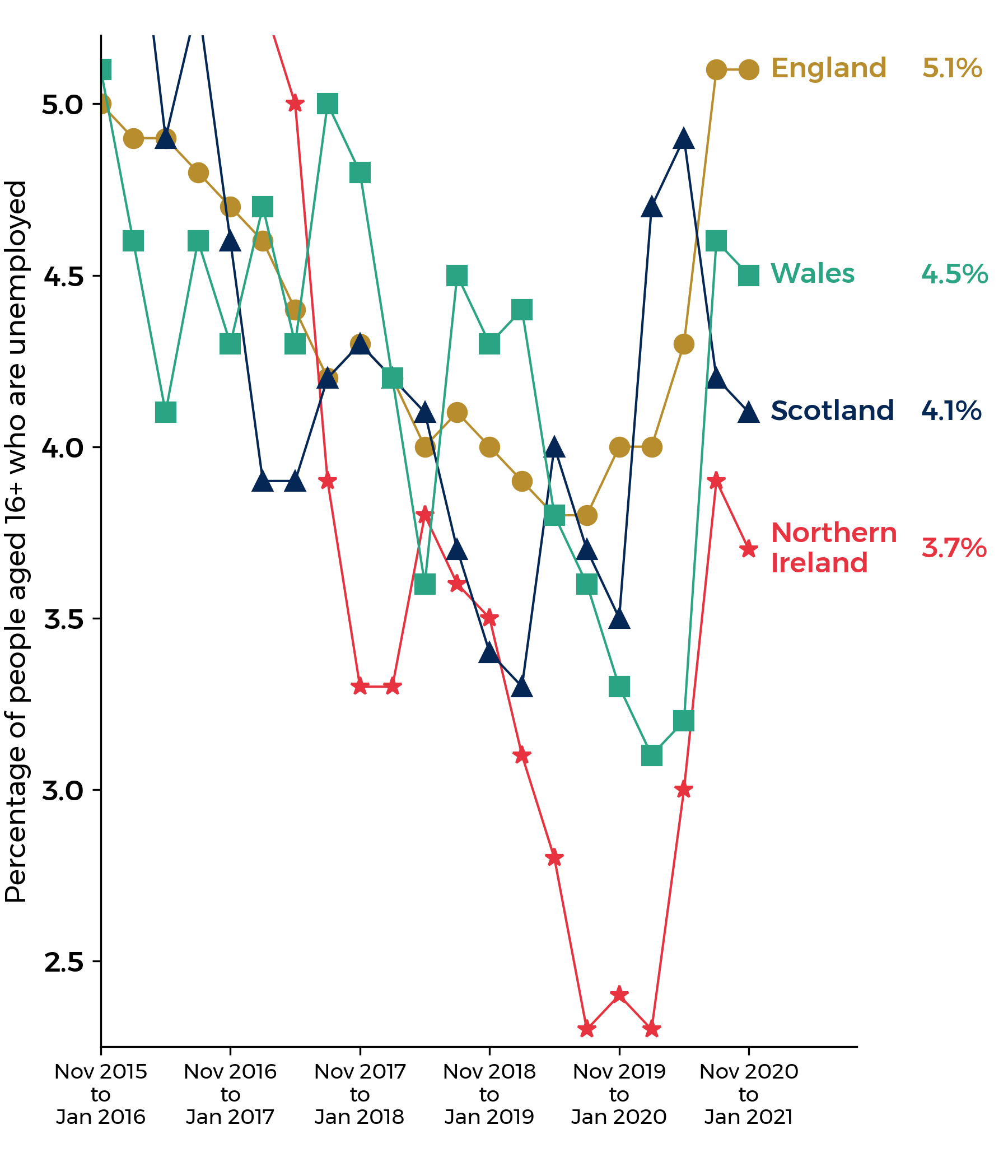 Source: ONS, Labour market in the regions of the UK: January 2021

Unemployment rate by age and sex in Wales; 12 months to September 2020

Unemployment data are also available by parliamentary constituency. The map below shows for the 12 months to September 2020 Swansea West had the highest rate (7.8%) and Carmarthen West and South Pembrokeshire the lowest rate (0.9%).

Note: The sample sizes in Cardiff Central and Cardiff West are too small to provide estimates.

Are there other data we can use to see the impact of coronavirus on the labour market in Wales?

Claimant count figures are published monthly and are more timely. However, people in work can also be eligible for Universal Credit and included in the claimant count. ONS states;

As part of the response to the pandemic, the rules about who can claim Universal Credit have changed, meaning an increased proportion of those claiming may actually still be in some kind of work. Because of these reasons, the change in the claimant count almost certainly ends up overstating any underlying change in unemployment. 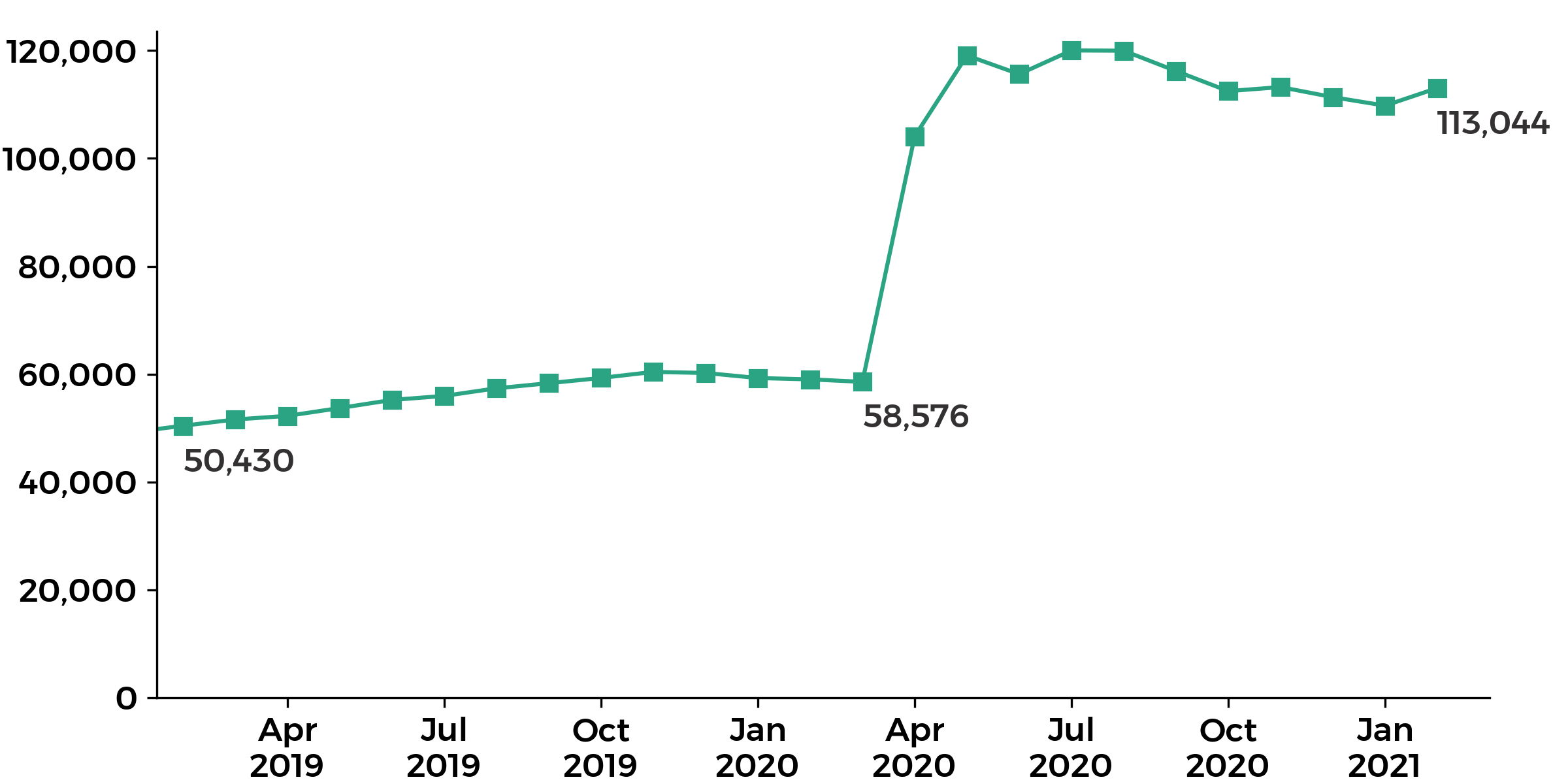 Notes: From May 2013 onwards these figures are considered Experimental Statistics. Under Universal Credit a broader span of claimants are required to look for work than under Jobseeker's Allowance. As Universal Credit Full Service is rolled out in particular areas, the number of people recorded as being on the Claimant Count is likely to rise. Rates for regions and countries from 2018 onwards are calculated using the mid-2018 resident population aged 16-64.