Anyone can get coronavirus, but its health, economic and social effects may not be equal. The virus and the response to it could widen existing inequalities, by reducing the incomes and increasing risks disproportionately for some groups of people.

The Welsh Government’s core values for healthcare planning and decision-making during the pandemic are clear that “everyone matters”, and that “health service delivery will follow the principles set out in equality and human rights legislation”.

We have also published an article on the human rights implications of the response to coronavirus, and another on children’s rights is forthcoming.

The population of Wales is more vulnerable to coronavirus

Some people are at higher risk of coronavirus than others, such as older people and those with certain health conditions like diabetes and obesity.

According to research by the Bevan Foundation:

Disproportionately more men and Black, Asian and minority ethnic people are getting critically ill from the virus

Data from Public Health Wales shows that (at this point) more women have coronavirus in Wales.

But England and Wales ONS data shows that, so far, more men are dying of the virus (data on deaths in Wales disaggregated by sex or age are not available).

Figure 1: COVID-19 confirmed cases in Wales by sex and age 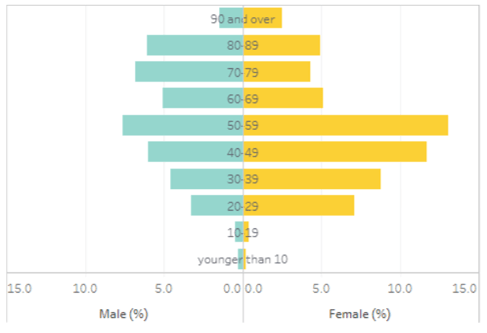 Figure2: Number of deaths involving COVID-19, England and Wales, by sex and age (year to date)

The Intensive Care Audit and Research Centre (ICNARC) reported on the outcomes of cases in critical care units in England, Wales and Northern Ireland on 10 April. This data shows that, of 3,883 cases admitted to critical care, a third were recorded as being from Black, Asian or minority ethnic (BAME) backgrounds.

Workers in health, social care, shops, and transport are more likely to be exposed to coronavirus. This has likely been exacerbated by the current lack of available personal protective equipment (PPE) in some sectors.

In 2017, 73% of the NHS workforce were women. Employment data from Welsh health boards also shows that women make up a higher proportion of lower pay bands, and a lower proportion of higher bands.

In England, BAME staff make up one fifth of the NHS workforce (equivalent statistics for the NHS in Wales are not published). This is compared to 14% of the population as a whole.

It is estimated that 80% of domiciliary care workers in Wales are women, and 50% are over the age of 50.

Other jobs are also at higher risk of exposure, such as shop workers. UK data for Tesco, Asda, Sainsbury’s and Morrisons shows that women make up more than 65% of the lowest paid roles (like shop floor jobs).

Men are much more likely than women to work in transport and driving jobs in Wales, according to the Annual Population Survey.

Young people, low earners and women are more likely to work in sectors that are shut down

Some sectors have been required to close completely, such as non-food retail, hospitality and leisure. While many workers in these sectors can be ‘furloughed’ during the outbreak, it is likely that some businesses will not survive, leaving workers at risk of redundancy.

You can read more about ‘furloughing’ and other employment issues in our blog post.

Analysis by the Institute for Fiscal Studies (IFS) shows that people aged under 25 were two and a half times as likely as other employees to work in a sector that is now shut down. It also found that low earners and women were more likely to work in these sectors.

The Bevan Foundation estimate that 211,500 people are employed in these sectors in Wales, which is about 16% of all employment.

Research by the TUC found that 69% of the 2 million people in the UK who do not qualify for statutory sick pay are women, because they are in low paid or insecure jobs.

Many people whose income is affected by coronavirus will rely on benefits. Nearly one million people in the UK applied for Universal Credit alone in the two weeks to 1 April. But the rates of many benefits are lower for people aged under 25, including Universal Credit.

Many seasonal workers in tourism or agriculture (who are more likely to be younger) who were due to start work after the 28 February cut-off date will not be eligible for the Coronavirus Job Retention Scheme.

Women, younger people, disabled people and people from certain ethnic minorities all are more likely to have lower median hourly earnings than other groups (such as men, non-disabled people etc.)

There is some evidence of a rise in domestic abuse

At this stage evidence of an increase in domestic abuse is based on media reports and service usage, until official statistics are published.

In a letter to the Prime Minister on 3 April, Women’s Aid in England stated that “at least eight women have been killed in the last few weeks where men have been charged with or suspected of murder or murder-suicides”. Refuge reported a 700% increase in calls to the national domestic abuse helpline in one day. Calls to the Men’s Advice Line also increased by 16.6% in the week starting 30 March, compared with the week before.

As shown by our annual gender equality indicators for Wales, women are far more likely to be killed by their partners and relatives, and are more likely than men to experience domestic abuse.

The Welsh Government announced additional funding for domestic abuse support services in December 2019, and has published guidance for services during the pandemic.

The Health Protection (Coronavirus Restrictions) (Wales) Regulations 2020 makes it an offence for a person to leave home without ‘reasonable excuse’. But it makes clear that a ‘reasonable excuse’ includes leaving the house to avoid injury, illness or a risk of harm,or to access domestic abuse support services.

Gaps in educational attainment could widen while schools are closed

Boys, children from low income families, and those with special educational needs (SEN) generally have lower educational attainment than their peers. Some ethnic minorities like Gypsy/Roma/Traveller and black children are also more likely to have lower attainment.

You can read more about education during the pandemic in our other blog posts.

Wales has the highest level of child poverty in the UK. The Institute for Public Policy Research (IPPR) estimates that one million children in the UK do not have adequate access to a laptop, tablet or internet at home.

This means that children may fall further behind at school if they share a tablet or laptop with siblings and working parents, or because they don’t have a device or home internet access at all.

A recent survey found that only 2% of teachers working in the most disadvantaged schools in England believe their pupils have adequate access to online learning.

Particular concerns have been raised about digital exclusion among children from Gypsy, Roma and Traveller families. Where these characteristics intersect (for example Gypsy/Roma/Traveller boys with SEN, or black children from low income families) the risk of disadvantage may be increased.

The closure of schools and childcare is also likely to have a significant impact on children with SEN and their families. Schools can provide care for ‘vulnerable’ children (which includes those with SEN) where there is no other alternative.

Welsh Government guidance states that “where possible, learners with statements of SEN will continue to have their needs met”.

It goes on to say that “local authorities should take all reasonable steps to ensure provision identified within an individual’s statement of SEN is delivered by their school and/or registered childcare setting”.

This is being administered through different methods including food vouchers, delivery of food parcels, and cash grants. The latter is the option favoured by the Bevan Foundation, which considers cash to be more flexible, allows local shopping, and removes stigma.

Disabled people, older people and carers will be disproportionately affected by the coronavirus response

Regulations made by Welsh Ministers to bring into force provisions in the emergency UK Coronavirus Act mean that local authorities no longer have a duty to meet adults’ eligible care and support needs, nor adult carers’ support needs. They now only have to meet the needs in the most serious cases where someone is at risk of abuse or neglect.

These changes will disproportionately affect older and disabled people who rely on social care. Read more about the Regulations in our blog post, and more about the human rights implications in another post.

Disability organisations in Wales also raised concerns that a lack of resources at the pandemic’s peak could mean disabled people do not receive the care they need.

As highlighted by the EHRC, women still bear the majority of all caring responsibilities for both children and older relatives. The need for unpaid care is likely to have increased with schools closing and the additional need to care for vulnerable relatives.