Cardiff Airport – is its financial performance taking off?

Further information on the acquisition of the Airport can be found in our first article in the Cardiff Airport series. This article follows on from the second in the series on passenger numbers, ahead of a Welsh Government debate on 10 March 2020.

Has the Airport made a profit?

No - and it’s made a pre-tax loss for each period since the Welsh Government’s acquisition.

The graph below shows the Airport’s income, expenditure and pre-tax loss from 2012 to 2019. 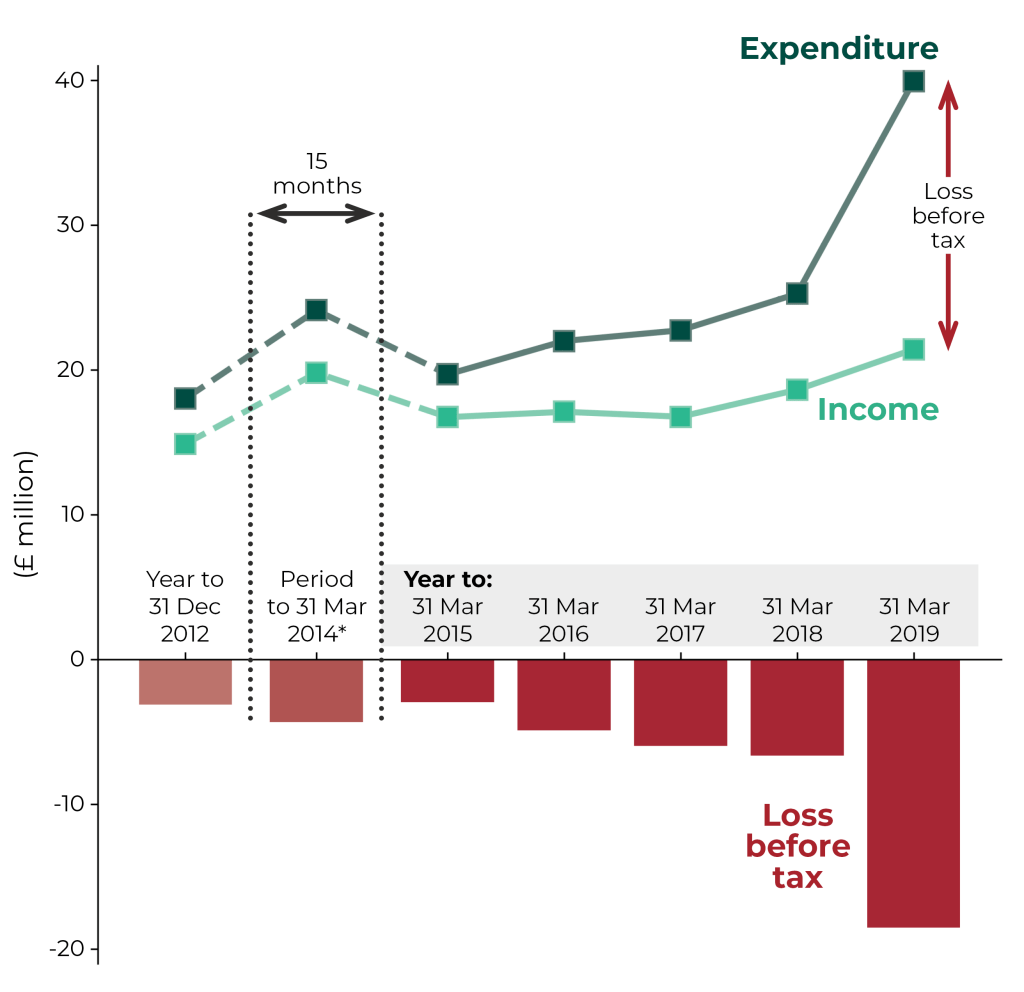 The Airport’s income increased by around £3 million (to £20.9 million) in 2018-19 compared with the previous year. Most of the increase was generated from the Airport’s commercial activities, including its revenue from retail concessions, duty-free shops, restaurants, and car parking.

The Airport estimates in its latest accounts that the contract rights it holds to provide certain services to other organisations were worth less than it had previously reported. Accounting rules mean that the decrease in the value of these contract rights, £9.4 million, was included as expenditure in the accounts. This, and costs of £140,000 for restructuring the organisation, were identified as exceptional items.

The pre-tax loss also reflects an increase in the Airport’s administrative expenses, which have increased every year since the Welsh Government’s ownership, rising by £4.8 million in 2018-19 compared with the previous year. The Assembly's Public Accounts Committee (PAC) is conducting an inquiry into the Airport. Officers explained the reasons for the Airport’s growing administrative costs. The Airport’s Chief Executive told PAC:

We have 1.6 million passengers [in 2018]. If you look across—globally, actually, for airports under 3 million we are hit disproportionately by externally imposed regulatory charge.

The Airport’s Finance Director told PAC that the Airport’s administrative expenses also included an increase in its depreciation charge or cost.

Since its purchase in 2013, the Airport has invested in its infrastructure and facilities, such as improvements to the departure hall, introducing additional retail, food and beverage opportunities to “improve the customer experience”. Capital expenditure such as this is accounted for in a specific way, with costs spread over different financial years. For example, if a new runway is expected to benefit the Airport for 50 years and costs £5 million to build, the Airport’s expenditure may include a charge of £100,000 per year for 50 years, rather than £5 million all in one go.

This charge is known as ‘depreciation’. Generally, investing more in its business through capital programmes will result in higher values of depreciation for the Airport, which leads to higher expenditure and could impact on profitability.

Pre-tax profit or loss is a measure of financial performance that takes account of all expenditure incurred by an organisation, including depreciation but excluding taxation.

The Airport uses a different indicator, ‘Earnings Before Interest Taxation Depreciation and Amortisation’ (or ‘EBITDA’), when it reports its financial performance. EBITDA adjusts profit to remove the impact of an organisation’s financing and accounting decisions, such as depreciation and taxation. It is seen as a measure of an organisation’s operating performance and is widely reported by companies, including some airports.

The Airport’s accounts for the year ended 31 March 2018, reported EBITDA of £7,000. In announcing the results, the Airport said:

…the Airport has achieved a positive EBITDA (earnings before interest, tax, depreciation and amortization) which is a measure of a company's operating performance. This is the first time a positive result has been posted in eight years.

The Airport and the Welsh Government have told PAC about the wider impact of the Airport on the economy of Wales.

In written evidence to PAC’s inquiry, the Welsh Government noted:

In 2018, [the Airport] had a total GVA footprint of £246m and it also sustains around 2,400 aviation-related jobs directly and indirectly in South Wales.

An independent report commissioned by the Airport (PDF 3 MB) reported that its economic impact was in line with that of bigger peer airports elsewhere in the UK. The report also benchmarked the Airport’s financial performance with that of other airports, concluding:

…the Airport’s financial performance is in line with what might be expected of a facility of Cardiff’s size that lacks income from a sizable property portfolio to supplement its aeronautical and non-aeronautical income. Continuation of these encouraging results does depend heavily, however, on control of costs being maintained and further passenger growth being secured.

On 10 March 2020 the Welsh Government will be holding a debate on the Airport which you can watch on SeneddTV.

PAC are also undertaking an inquiry into the Airport. The fourth evidence session will be held on 23 March 2020, which can also be watched on SeneddTV.