The challenge of the planned care backlog is huge. It’s one of the biggest challenges for the Welsh NHS. and will require health services to transform at a scale and pace not seen before.

The Senedd’s Health and Social Care (HSC) Committee launched its inquiry in November 2021 into the impact of the waiting times backlog on people in Wales.

Waiting lists grew from March 2020 to April 2022; the number of patient pathways waiting to start treatment rose by over 50% over this period.

Through interviews and focus groups with patients, the HSC Committee heard distressing stories that behind these statistics, are individuals whose daily lives—and potentially those of their families, friends or carers—are being affected by delayed diagnosis or care. People are living with chronic pain, distress, discomfort and anxiety.

The Committee published its report - ‘Waiting Well? The impact of the waiting times backlog on people in Wales’ in April 2022. The Welsh Government responded on 30 May 2022. A debate on the report and the response to it will be held in Plenary next week (29 June).

This article provides information about the current waiting lists, the Welsh Government’s programme to address them and its response to the Committee’s ‘Waiting Well?’ report.

A Plan to recover, reset and transform planned care services

The Welsh Government published its plan for reducing waiting lists in April 2022. The plan sets out a number of key ambitions to reduce waiting times :

Our article ‘Reducing the NHS waiting list backlog’ looks at the latest Welsh Government statistics to help monitor progress in achieving these ambitions (recovery targets). It will be updated regularly.

Referral to treatment (or ‘RTT’) is the time from referral by a GP to hospital for treatment and includes time spent waiting for any hospital appointments, tests, scans or other procedures that may be needed.

The latest data (April 2022) show the number of patient pathways waiting to start treatment has increased significantly since March 2020. At the end of April 2022, the waiting list reached 707,098, frequently described as the equivalent of one in every five people in Wales, although some may be on more than one waiting list. This represents an increase of 54.8% since March 2020 (when 456,809 were waiting).

Graph 1: Percentage of patient pathways waiting less than 26 weeks and more than 36 weeks to start treatment 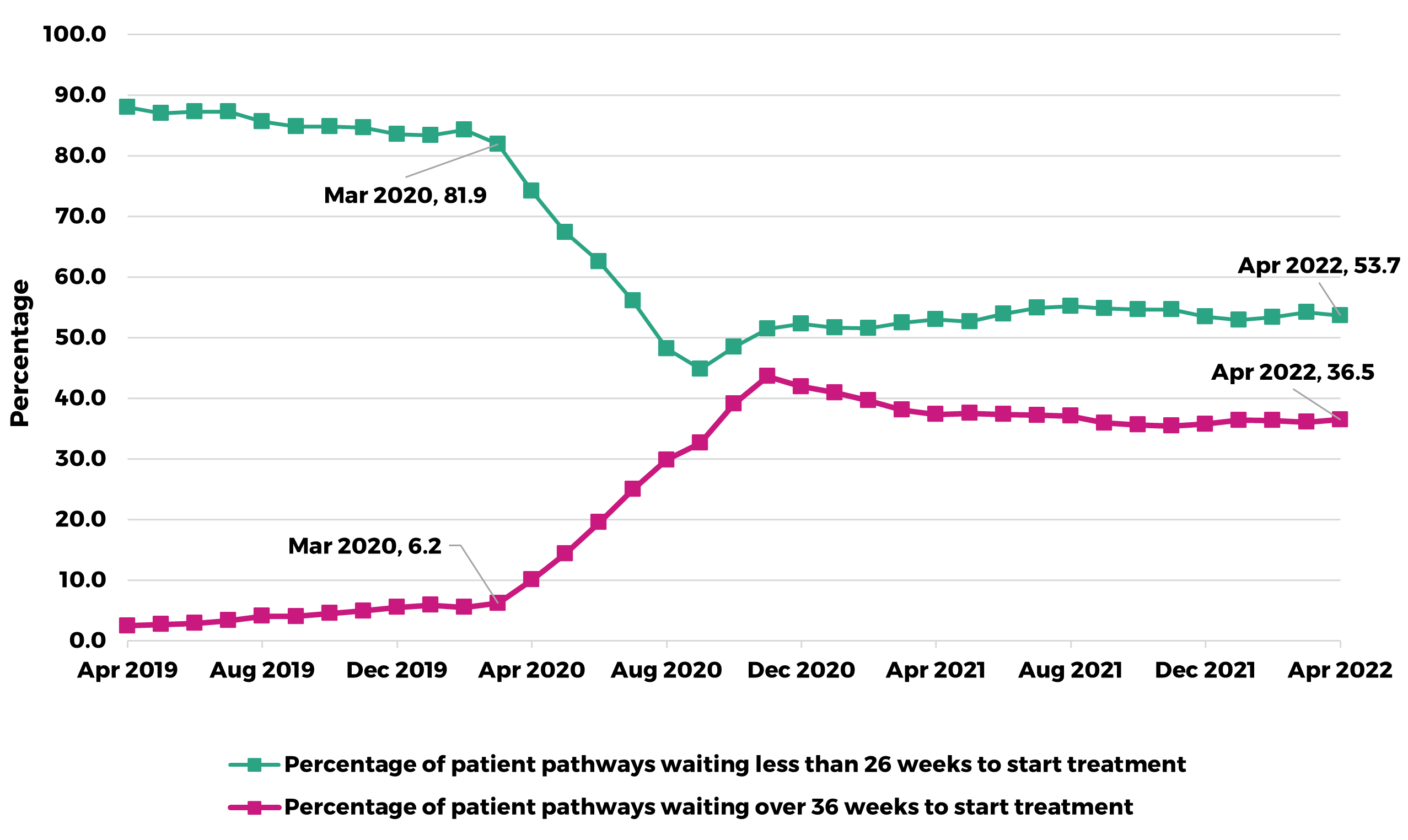 The graph below shows the trend in the percentage of patients waiting beyond the targets. 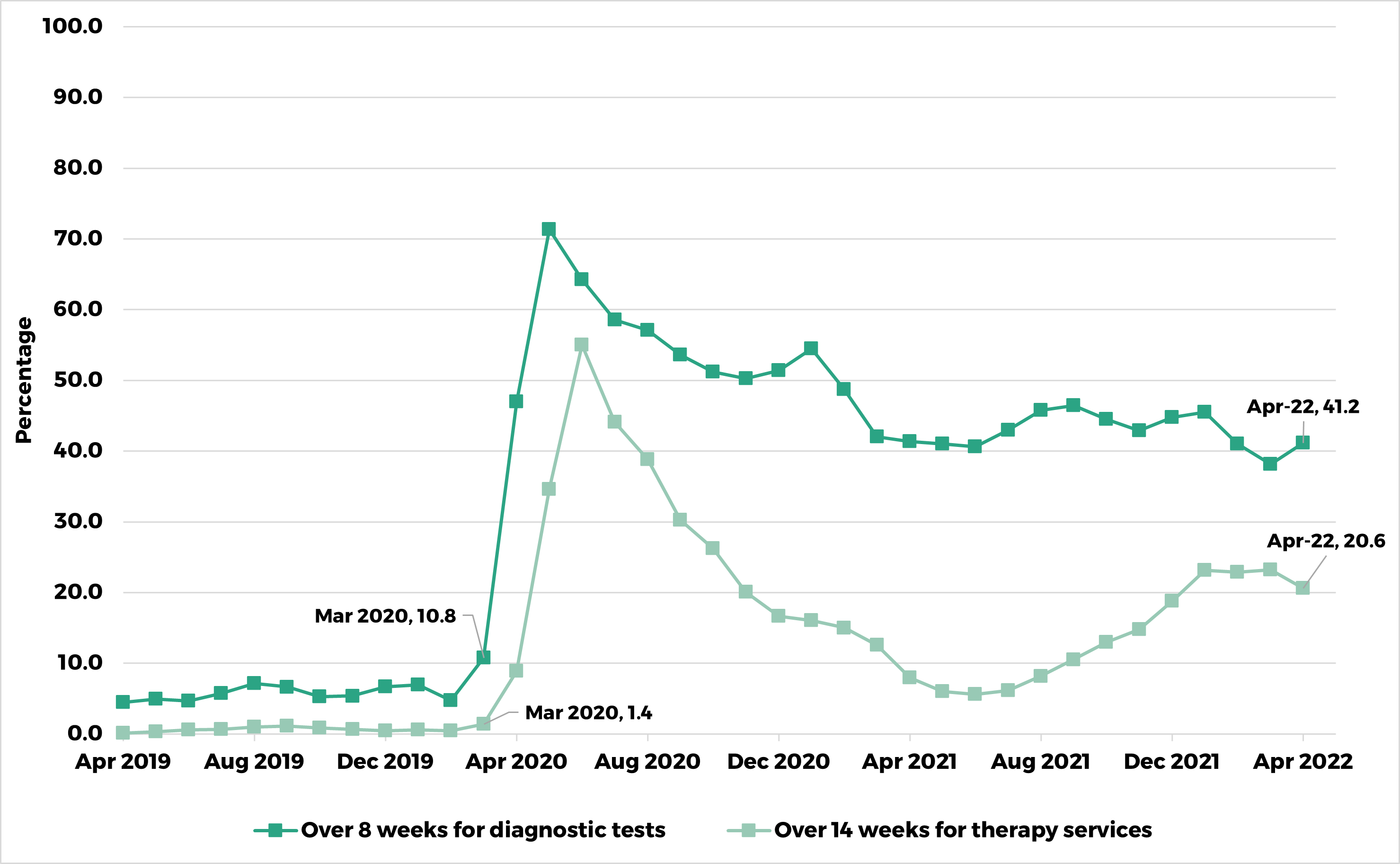 The cancer waiting times data for April 2022 show that just 56.4% of patients had their first treatment within 62 days; well below the target of 75%.

Graph 3: The percentage of patients who received their first cancer treatment within the target 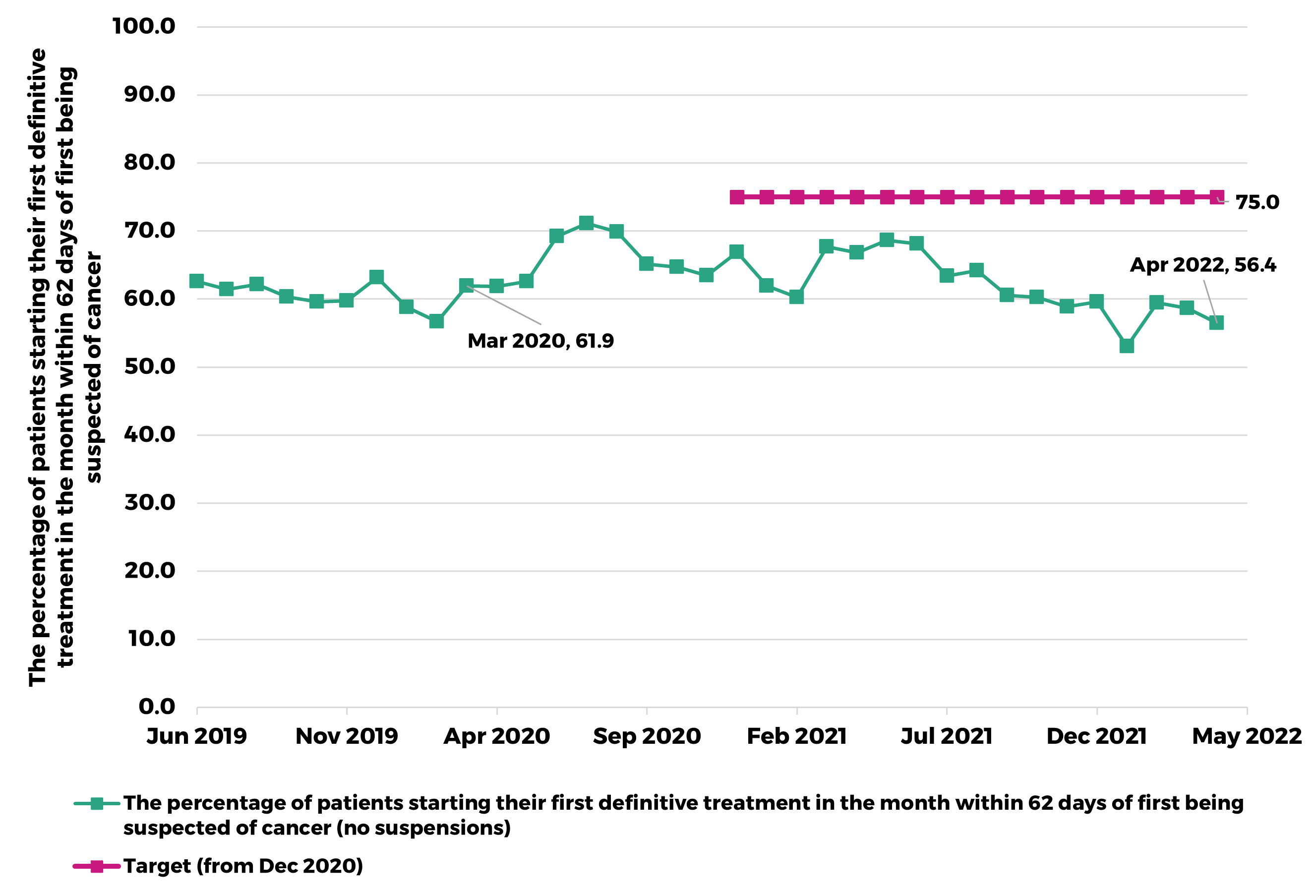 The HSC Committee recommended in its report that the plan for tackling waiting times should focus on supporting patients while they are waiting for treatment, as well as set out how the backlog will be addressed.

The Welsh Government says it will support people to wait well by providing better information and support, including to help them manage their conditions and to prepare for surgery. They say “planned care recovery will be underpinned by a commitment to fundamentally transform the waiting list into a preparation list”.

The Committee made 27 recommendations – all of which were accepted by the Minister (albeit one was partially accepted).

Committee Members will ultimately decide whether the Welsh Government has fully accepted all of the Committee’s recommendations in the way they envisioned. There’s a lack of detail in some areas; in many instances the Minister is ‘still considering’ how best to take some things forward.

It announced “an extra £60m – £15m a year over the next four years – for health boards” when it published its NHS recovery plan in April 2022. The Welsh Government said this latest funding meant it had now allocated more than £1bn this Senedd term to help the NHS recover from the pandemic, which it had committed to doing.

Audit Wales reported (May 2022) that NHS bodies struggled to spend all of the Welsh Government’s 2021-22 funding for planned care in the short-term and this was one of the significant factors limiting the provision of these services.

It says there are some significant barriers that need to be overcome to make inroads into the backlog, including the on-going impact of COVID on services, workforce challenges, and limitations in the current NHS estate

Audit Wales modelling suggests it could take up to seven years or more to return waiting lists to pre-pandemic levels.