‘A network of alternatives’ to the M4 relief road? – Burns Commission publishes its final recommendations

The South East Wales Transport Commission, chaired by Lord Burns, has published its final recommendations report. The Commission, set up in response to the First Minister’s decision not to proceed with the M4 relief road, was tasked with making recommendations on a “suite of alternative solutions” to the congestion experienced on the M4 corridor around Newport.

The Welsh Government says it will issue a detailed response to the proposals, with the Minister for Economy, Transport and North Wales, Ken Skates, due to make a statement in Plenary on 8 December.

This article explores the Commission’s recommendations and considers them in light of the Welsh Government’s wider transport work and policies.

How did we get here?

Despite the independent inspector’s conclusion there was a “compelling case” for the M4 relief road scheme, in June 2019 the First Minister announced the plans would not proceed. He cited cost and environmental impacts as the major factors in his decision.

At that time, it was also announced that the South East Wales Transport Commission would be established to review the evidence and make recommendations on alternative solutions to the congestion problems.

In July 2020, the Commission’s emerging conclusions report set out key findings from its work, and its view that:

… the region needs an integrated network of alternative transport options that do not depend on the motorway … in particular new rail stations, reliable bus services and new cycling routes.

The Commission’s final recommendations report was published on 26 November.

What are the Commission’s recommendations?

The Commission recommends a “network of alternatives”, centred on public transport, to be delivered through five packages: infrastructure, network policies, behaviour change, governance, and land use and planning.

On the same day as the report was published, the Minister for Economy, Transport and North Wales welcomed the report’s focus on developing the public transport network. highlighting the Wales Transport Strategy currently being consulted on and the “close alignment” between the two documents.

Perhaps the most high profile package of recommendations from the report, the Commission proposes:

The Commission acknowledges that some of the proposals made are not within the Welsh Government’s devolved competence. Rail infrastructure, while key to the solution proposed, is a reserved matter, with the exception of the Core Valleys Lines which transferred into Welsh Government ownership in March 2020.

The Commission acknowledges its proposals are ambitious, and it could be said that none are more so than its suggestion of developing six new rail stations at Newport Road, Cardiff Parkway, Newport West, Newport East, Llanwern and Magor. However a number of these proposals are already being taken forward or have been supported by the Welsh Government, notably those relating to new stations at Cardiff Parkway and Llanwern. 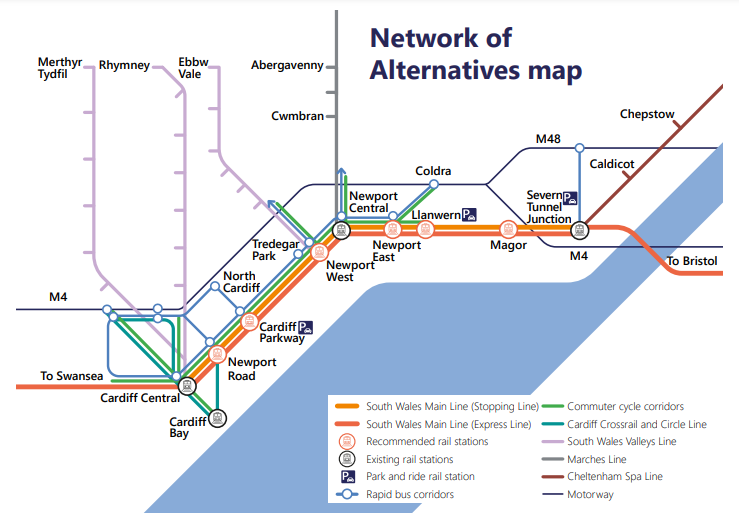 This package of recommendations focuses on:

Of course the Welsh Government already has ambitions for a number of these measures to be delivered through Transport for Wales and its Metro plans. It could also be said that the coronavirus pandemic has created an environment where these recommendations are more likely to be achievable.

It has led to the Welsh Government announcing its intention to bring rail operations under direct public control from next February.

Support has also been needed for bus services and in July the Welsh Government announced the creation of a Bus Emergency Scheme (BES). In October, the Deputy Minister for Economy and Transport, Lee Waters, described the BES as “the most radical intervention in the bus network since deregulation over 30 years ago”.

More detail on the BES emerged during a scrutiny session held by the Economy, Infrastructure and Skills (EIS) Committee in November. The Committee heard that the BES will create “public service obligations (PSOs) for the provision of bus services” across Wales that will allow:

… public authorities—so, Welsh Government, Transport for Wales and the local authorities—… to exert more influence over future routes and services than we're able to at the moment.

PSOs can be put in place for up to two years and the integration of bus and train timetables was described in the Committee session as “exactly what [the Welsh Government wants to use its] power through funding for the BES to do”.

This package of recommendations is centred around:

Essentially, a WPL would charge employers for the number of parking spaces they provide to their employees, although the Commission suggests this is a longer term project to be considered “once new transport options exist”.

The report provides the WPL introduced in Nottingham in 2012 as an example.

The Welsh Government has previously signalled its ambition for 30% of the Welsh workforce to work either from home or near home and is already exploring options for “a network of community-based remote working hubs”.

The Commission recommends the Welsh Government adopt “a single guiding mind approach to transport governance”, and that a partnership “between Welsh Government, Transport for Wales and local authorities” be formalised.

In October, the Welsh Government launched its consultation on Corporate Joint Committees (CJCs), to be established under the Local Government and Elections (Wales) Bill. The consultation sets out functions that CJCs will exercise and includes developing Regional Transport Plans.

The Commission also recommends that the Welsh Government should “legislate for a broader range of bus regulation powers as soon as possible in the next Senedd term”.

The pandemic has meant that the planned Bus Services (Wales) Bill was withdrawn in July, the provisions of which would have allowed the Welsh Government to make a number of changes to the way bus services in Wales are operated, In November, the Welsh Government told the EIS Committee that it was still working on a Bill that could be introduced in the next Senedd, should the next government want to legislate.

Land use and planning

The final package of recommendations in the report focuses on planning new developments around the public transport network and using the future South East Wales Strategic Development Plan to “master plan the region”.

The Senedd has recently scrutinised the Welsh Government’s National Development Framework – due for publication in February 2021 – which sets out a 20 year new national spatial strategy for Wales and has development plan status.

The Commission was not set a formal budget and the First Minister has previously said it would have “first call” on the £1billion the Welsh Government was prepared to spend on the relief road. Critics pointed to the fact that the costs of the relief road scheme were cited as a major factor in it not proceeding.

The Commission estimates the core capital cost of its recommendations as “between £600m and £800m, spread over around 10 years”, significantly lower than the estimated £1.3billion cost of the relief road scheme. Although as we found with the M4 project itself, costs have a tendency to increase as schemes are developed.

On 8 December the Minister for Economy, Transport and North Wales is due to make a statement in Plenary in response to the report. The EIS Committee has also invited Lord Burns to attend its 13 January meeting.

A positive Welsh Government response seems likely. On 22 October the Minister told Plenary that he has asked Transport for Wales “to start developing a strategy for a joint delivery unit … to ensure that we can deliver on the recommendations” of the Burns Review.

Despite the report, it is hard to envisage that the question of whether the relief road should still be built will ever disappear.

Whilst it would seem funding powers alone wouldn’t enable the UK Government to build the road – a devolved matter - in October, the Prime Minister once again told the media the relief road was "one of the things that we’ll be seeing if we can take forward."

Of course the implications of the impending Senedd election, due to take place next May, remain to be seen.